Are Entrepreneurs Made not Born?

Are Entrepreneurs Made not Born? 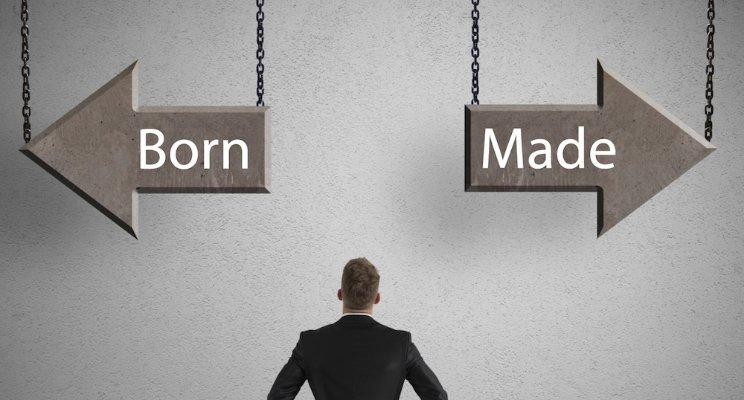 The age-old debate of nature vs nurture has resurfaced following the publication of research that claims you are not born with an entrepreneurial gene - apparently, the secret lies in being immersed in an entrepreneurial culture from a young age. So does that mean the likes of Richard Branson, Steve Jobs and Bill Gates don't have that entrepreneurial spirit locked into their DNA?

The study, by Vistaprint and OnePoll, looked at 500 small-business leaders (those with fewer than 50 employees) aged 18+. It discovered that there are three decisive factors in becoming an entrepreneur, all of which are intuitive:

The study also recognizes a requirement to have three personality traits:

Interestingly, despite what many people believe, becoming rich is a relatively poor motivator for being an entrepreneur -- fewer than 25% of the entrepreneurs who were researched mentioned money as a motivating factor. A far more important factor was the "desire to be their own boss," which was cited by 56% of respondents.

Autonomy (46 percent), freedom (45 percent), and being in total control of your work (41 percent) also featured highly on the survey.

What Does This Mean for You?

So, are all entrepreneurs exactly the same? The reality is that they are not - aspects such as your Country of birth, culture and socioeconomic status all have a huge bearing on your access to entrepreneurship.

However, there are many similar traits for entrepreneurs: 45% like to learn, 45% believe they are curious, 44% are reliable, 42% are determined and 40% are passionate.

It also appears there are some age differences. One in particular might surprise you. You might expect that younger entrepreneurs are more likely to take a risk, whereas a Boomer or Gen-Xer would be much less likely. According to the research, that isn't the case. Forty-one percent of people 55-plus claim that they can and will take a risk, versus 25 percent of those under 34.

Is there an element of pure luck when entrepreneurs become successful? Not according to the surveyed respondents, who believe that less than 25 percent of success is attributable to chance. As one of the researchers writes:

Entrepreneurs are well aware that luck, in the true sense of the word, is not enough to succeed in the long run. On the other hand, it may be possible to "provoke one's luck" by developing one's network, staying abreast of one's environment and opportunities, and giving oneself the means to seize them.

According to serial entrepreneur Gary Vaynerchuk, this is all nonsense. In his opinion:

The fact is this: entrepreneurs are born, not made. Of course, anyone can maximize any skillset, but it doesn’t necessarily make them successful at it. I could maximize my singing with vocal lessons, but I’ll still always just be a mediocre singer. To win at the very top of the chain, to make it big in the business world and in any arena, you have to be born with talent.

So what do you think? What really makes some people employees and others entrepreneurs? Personally, I'm not convinced that the success of entrepreneurs is entirely down to what you learn. There must be an innate element that plays a significant role and it's a blend of nature and nurture that creates an entrepreneur. Like the old expression goes "genes load the gun but environment pulls the trigger." As ever, I'm keen to hear your thoughts.