Why Actions Not Intentions Make You an Effective Leader

Why Actions Not Intentions Make You an Effective Leader

Most managers and executives don't intend to fail at leadership.

While failing might not mean a demotion or losing a job, it almost certainly includes a disengaged team, poor results, and a high voluntary turnover rate.

Research suggests that between 50% and 70% of executives fail within 18 months of taking on a role, landing somewhere between "failing spectacularly" or "quietly struggling."

But not even the most narcissistic professionals set out to fail. Most leaders start with great intentions, but don't back up those intentions with quality leadership actions.

Good intentions without quality actions are meaningless in leadership.

Anyone who has been married for any length of time has used the line "that wasn't my intention" in an argument or disagreement. Which in turn is met with, "that doesn't matter." Maybe I am projecting my shortcomings there, but either way, intentions by themselves aren't good enough in marriage, and they're not good enough in leadership either.

An intention is a person's design, an aim, or a plan. It comes from the Latin word intention, which means "stretching, purpose.'

It turns out we all have a set of intentions that we would like to achieve as a leader, but its action on that aim separates managers from leaders. Pablo Picasso famously said, "Action is the foundational key to all success." Not only is Picasso right, but team members and colleagues don't want to hear about your intentions; they want to experience your actions.

Team members don't want to hear about a leader's intentions, they want to experience quality actions.

I wrote in Building the Best about a pattern I have observed in many great leaders that lead to their a growth mindset in life and the development of their leadership skills. It's what I call iAOL; an acronym that stands for intentions, action, outcome, learning. As you can see below, many leaders start with good intentions, but don't follow through with quality actions. Intentions alone will never lead to learning and development. 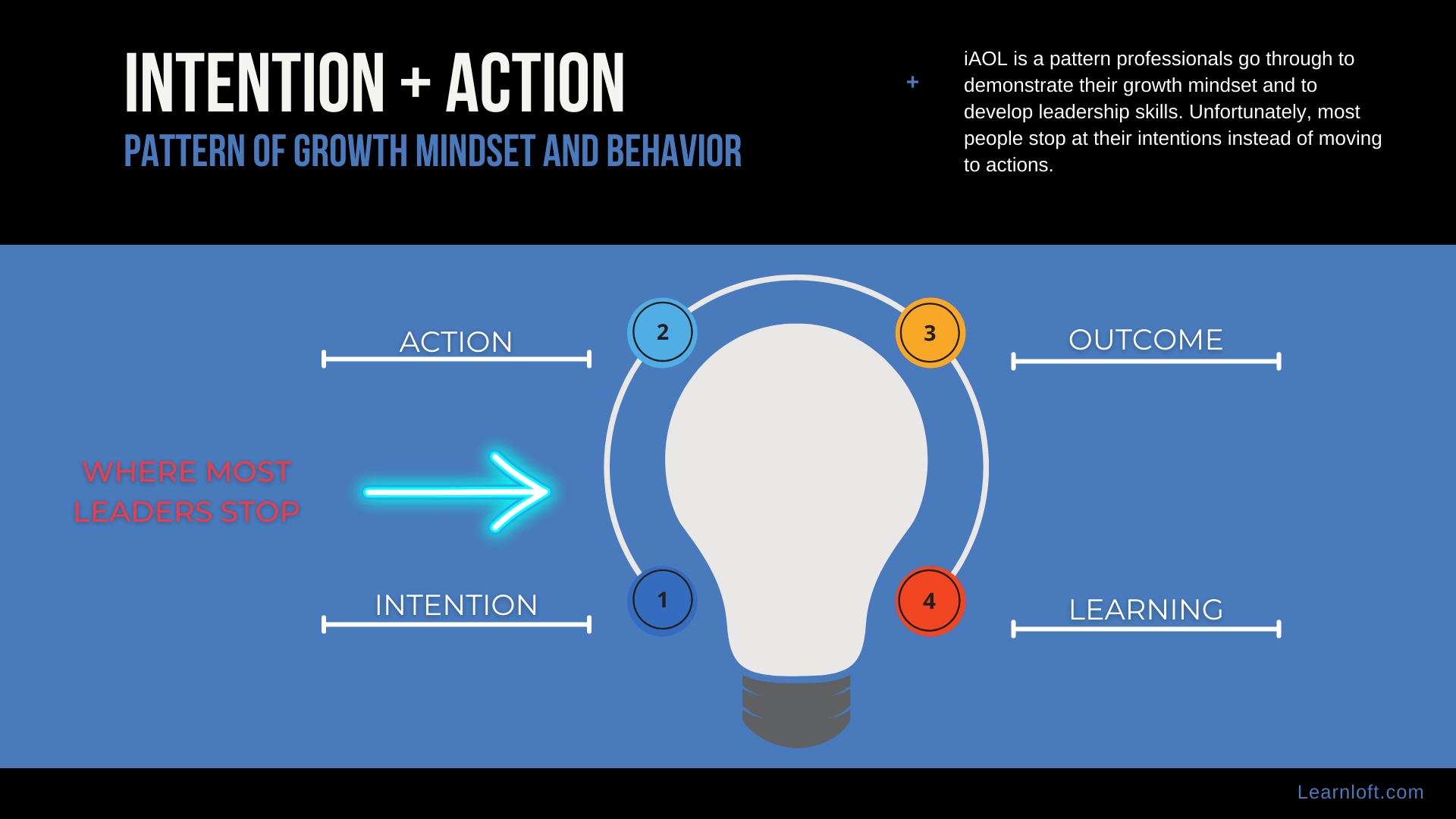 Following up and demonstrating leadership actions regularly isn't easy. It's tough because leadership by definition, is all about elevating other people, and the people you lead aren't perfect and neither are you.

No leader sets out to be a poor communicator, but it's an all too normal reality. The vast majority of professionals are in a consistent state of miscommunication with their boss or the organization. While this seems like an obvious misstep, team members fill the silence with their own story when leaders don't communicate effectively.

Instead of allowing extended periods of silence, communicate what you know about the current situation or, at a minimum, the actions you are taking to figure it out.

Having clearly defined standards and expectations of behavior is at the center of every successful team. Unfortunately, most leaders are in constant disappointment because of the wide gap between their expectations and reality.

Many leaders are in constant disappointment because of the wide gap between their expectations and reality.

Instead of having misaligned standards and expectations, remove the invisible barrier. Set the expectations clearly, then do everything in your power to help your team meet and exceed them.

Teams see better results if the people on them are getting better every day. The way this happens is by leaders in a constant state of learning. Karl Popper famously said, "true ignorance is not the absence of knowledge but the refusal to acquire it." In today's modern internet, information is more readily available than at any time in history.

That presentation of information is accompanied by the opportunity to comprehend it. Sometimes we can comprehend the information on our own, and other times we need a teacher, instructor, or expert to help us. Part of your job as a leader is to coach your team to deeper levels of understanding and wisdom.

Instead of just hoping your people grow and develop, ensure you don't leave them on an island on their own. Instead, invest in their development and coach them for growth daily.

Last but certainly not least, is the mack daddy of them all. Being honest and leading with integrity has become the exception instead of the rule, and that's beyond sad.

Being honest and leading with integrity has become the exception instead of the rule, and that's beyond sad.

No one sets out to lie or consistently participate in acts of omission, but once it starts, it's like an avalanche. Pretty soon, you do it so often it becomes second nature. Nothing will cause a leader to fail more than covering up the truth or lying. When the truth inevitably does come out, it will disintegrate trust, and without trust, you can't lead.