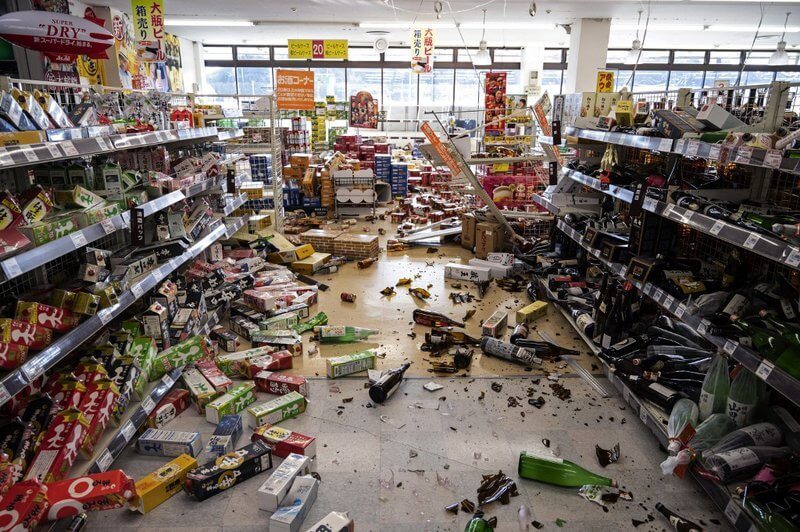 The quake affected the Fukushima region, where a tsunami a decade ago set off one of the worst nuclear plant disasters in history.

Four people were reported dead and more than 100 injured in Japan after a powerful overnight earthquake rattled large parts of the east coast and prompted a tsunami warning, authorities said.

The 7.4-magnitude quake off the coast of Fukushima derailed a bullet train, opened cracks in highways and threw products from shelves in shops.

A tsunami warning for waves of up to a metre (three feet) in parts of northeast Japan was lifted in the early hours of Thursday, after authorities recorded water levels up to 30 centimetres higher than usual in some areas.

Multiple smaller jolts continued to hit the region into Thursday morning, straining nerves just days after Japan marked the 11th anniversary of the massive quake, tsunami and nuclear disaster in the area.

Damage appeared comparatively minor, in a country with tough building codes intended to protect against devastation from frequent earthquakes, and officials said there were no abnormalities at nuclear plants.

Government spokesman Hirokazu Matsuno said four deaths had been reported, though investigations were still under way into whether they were a direct result of the quake.

Another 107 people were injured, he added.

The quake struck at a depth of 60 kilometres (37 miles) not long after 11.30 pm and was preceded minutes earlier by a 6.1-magnitude shake in the same area, Japan’s Meteorological Agency said.

In Shiroishi city, employees at a supermarket were cleaning up damage including products that toppled from shelves and a partially caved-in ceiling.

The jolts also rattled the capital and temporarily plunged parts of Tokyo and other areas into darkness.

Blackouts hit around two million homes in Tokyo and elsewhere in the immediate aftermath of the quake, but power was progressively restored throughout the night. Some 30,000 homes were still without power on Thursday morning, with another 4,300 without water.

Elsewhere, some damage was reported, including the collapse of a stone wall at the site of Aoba castle in Sendai, and a Shinkansen bullet train derailed north of Fukushima city.

There were no injuries in the derailment, but 75 passengers and three staff on board were trapped for four hours before being able to escape the train.

Japan sits on the Pacific “Ring of Fire”, an arc of intense seismic activity that stretches through Southeast Asia and across the Pacific basin.

The country is regularly hit by quakes, but it remains haunted by the memory of the 2011 catastrophe which left 18,500 people dead or missing, most in the tsunami.

Around the stricken Fukushima plant, extensive decontamination has been carried out, and no-go zones now cover just 2.4 percent of the region, down from 12 percent, though populations in many towns remain far lower than they were before.