The Coming Evolution Electric Power in the US

The Coming Evolution Electric Power in the US 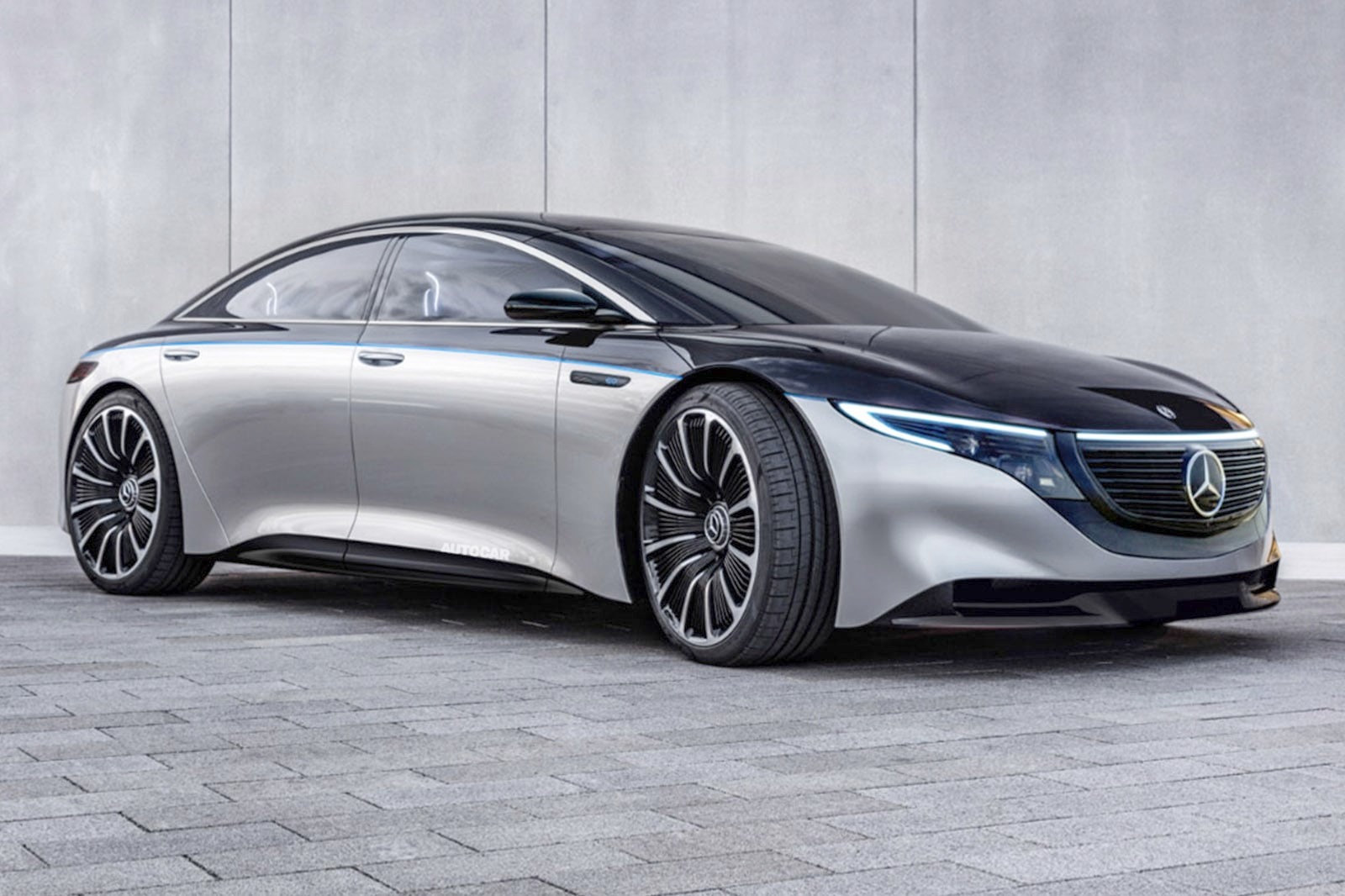 Even readers who are only experiencing the Texas electricity disruptions from afar may wish to consider a new report from an expert panel at the National Academy of Sciences, The Future of Electric Power in the United States (2021, prepublication copy downloadable for free).

Here's a summary of a few of the main economic and technological changes facing the US electricity industry.

1) A Potentially Large Increase in Demand for Electricity 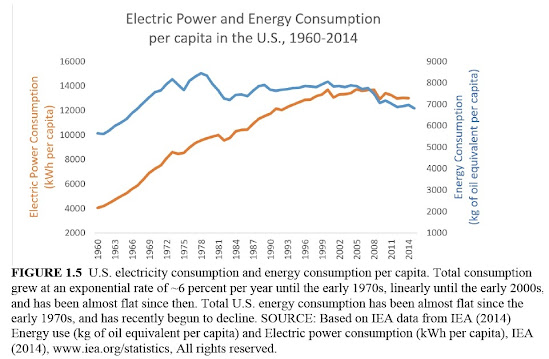 But looking ahead, at present about 0.1% of energy for US transportation come from electricity. If the market for electric cars expands dramatically, this will clearly rise--and given that much of the recharging of electric vehicles would happen in homes, the transmission of electricity to residences could rise substantially. Also at present, "12 percent of energy used by industry came from electricity in 2019, almost all deep-decarbonization studies suggest that electrification of certain industrial end uses will be important."  More broadly, pretty much all aspects of the digital economy run on electricity. One estimate is that for the world as a whole,  "data centers and networks consumed around 380 terawatt hours (TWh) of electricity in 2014–2015, about 2 percent of total electricity demand."

Of course, continual increases in efficiency of electricity use--say, by large household appliances and new light bulbs--could offset this rise in demand for electricity. On the other side, changes in more people using electricity in their homes or all purposes, rather than using natural gas or oil, could also shift electricity demand higher.

2) A Shift in How Electricity is Generated

Even if the demand for electricity doesn't risk, there is an ongoing push toward generating electricity in different ways that produce less or no carbon emissions. As the report says: "An economy that decarbonizes is an economy that electrifies." Here's a graph showing the current sources of electricity in the US. 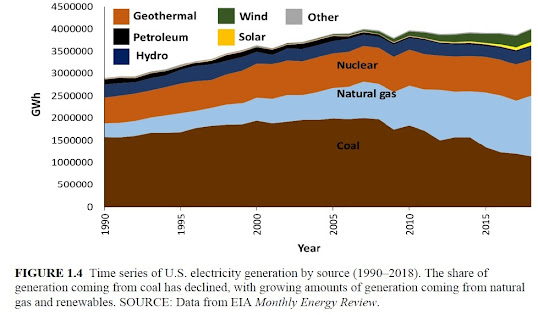 Obviously, coal and natural gas still dominate electricity generation in the US. As the report notes: "So far, the United States is making modest progress in decarbonizing its power sector primarily

through the replacement of coal with natural gas—sometimes called `shallow decarbonization'—but the path to deep decarbonization is not yet widely agreed upon."

There doesn't seem to be much of a push for more nuclear or hydro (although there probably should be), which means that we're talking about here is expanding the green and yellow areas to account for a much larger share of electricity generation over the next 2-3 decades. Maybe other technologies like carbon capture and storage or hydrogen can make a difference, too. My sense is that most people (and politicians) have no realistic sense of what would be needed to make solar and wind the main elements of the electrical grid. It's not just expanding wind and solar by a factor of maybe 10, with all that implies for building additional solar and wind facilities, but it's also building the new transmission lines needed to get the power where we want it to be and building the electricity grid so that it can deal with the intermittent nature of these sources of electricity.

The old traditional method of producing and selling electricity involved a few big generating facilities:  the report calls this the "make it-move it-use it" model. The new method involves decentralized electricity generation from a variety of possible sources, right down to rooftop solar panels that can supply electricity to the grid. In addition, electricity providers are gaining the capability to charge different amounts at different times of day, or for different levels of household usage, or even to cycle your air conditioning or heat on and off at times when demand is especially high. There may also be rising demand for different kinds of electricity provision: for example, homes may want "fast-charging" capability for their electric car, but status quo electricity elsewhere in the grid. Certain areas may have industrial or information-technology facilities that need especially large quantities of electricity. Issues of physical security of the grid and also cybersecurity of the grid are important, too.

Factors like these mean that the electricity grid itself is becoming enormously more complex to manage, with a much wider range of options for generation, distribution, and usage.

The report discusses an array of other topics, including jobs that will be lost and gained, global supply chains for the kinds of equipment that will be needed (much of it based in China), effects for people with lower-incomes who may have less access to reliable electricity, and so on.

But in my mind, perhaps the key point is recognizing that the evolution of the electricity industry is heavily shaped by physical realities and by regulations at both state and federal levels. With many industries, I'm happy to let private companies struggle in the market to get my business, with a relatively mild background of government regulation. But for most of us, electricity is delivered from a common  grid, and I don't have a choice of competing providers. The rules for  how my power company will buy power, and how it determines what it will charge me, are heavily regulated and largely opaque to the public. Questions about where new generating facilities and new transmission lines will be built often seem to involve one separate dispute at a time, rather than as part of an overall strategy. The incentives for a given electricity utility to invest in research and development or to experiment with different kinds of service provision,, given the realities of regulation, can be quite limited.

In short, the electricity market is facing needs for transformational change in a regulatory and economic context where change has traditionally been constricted and piecemeal. It's all too easy to imagine how pressures for change and limits on change will collide.

View all
Why Great Leaders Use Better Not Perfection to Drive Performance
Why You Should Consider Adding Addressable TV To Your Marketing Plan
3 Important Tips to Deal With the Impact of Covid-19 on the Psychological Safety Within Your Team With Lies Wouters
Top 4 Unknown UK Laws Prohibiting People from Enjoying Themselves
Spilling the Loyal-TEA! 7 Ways to Build and Sustain Brand Loyalty
Average Order Value: How to Boost This Critical Growth Metric
Is Geoengineering Research Objectionable?
How The Internet of Things Can Promote More Sustainability
How Virtual Reality is Being Used for Renewable Energy Training
Top Simple Ways To Educate Yourself About The Environment
6 Important Ways to Reduce Waste and Improve Safety in Physical Research Laboratories
How Robots Can Provide Safe Munition Recycling in Smart Cities
5 Most Common Myths to Know About Mortgage Process
Bitcoin is Dead, Long Live Bitcoin
Assessing The Financial Impact of Artificial Intelligence In Human Resource Management
Why Refinansiering (Refinancing) Is Important for Your Consumer Loans
How About a Moratorium on Personal Spending?
Most Popular NFTs on the Current Market
How Money Printing Destroyed Argentina and Can Destroy Others
Designing Tax Incentives for Charitable Giving
The Dollar and Euro are on the Verge of Parity for the First Time Since 2022
Global Value Chains and Rethinking Production and Trade
Talking Econometrics
Why Didn’t the US Adopt the Metric System Long Ago?
The Crucial Role of Blockchain in Politics
UK Government Approves Chelsea Takeover Deal
Texas Shooting: At Least 19 Children & 2 Adults Dead
Russian Soldier Jailed For Life Over Killing An Innocent Civilian
Finland and Sweden Submit their NATO Applications
Queen Makes Surprise Visit at Paddington Station to See the Elizabeth Line
Why Do Laboratories Need to Improve Their Cybersecurity?
NASA Capture Satellite Images of Kavachi Volcano
Improving Paralysis Treatment With Virtual Reality
The Negative Impact of Big Data
Everything You Need To Know About Monkeypox: Symptoms, Cause & Things To Avoid
COVID-19 World vs. Sustainable Smart World: Global AI and Data Solutions
How a Neon Sign Can Brighten Your Home
How to Make Customers Fall in Love With Your Moving Company
Beginner's Guide - How To Choose the Right XLR Cable?
Learning Critical Thinking - Planning
Students’ Attitudes Toward Learning Post Pandemic
Managing the Remote Working Gulf with Fairness: Retention is at Stake
Beginner's Guide to Web App Development
Ethical Principles of Facial Recognition Technology
3 Innovative Ways You Can Use Robots
Applying Design Thinking for Artificial Intelligence
Technology Trends In The Logistics Industry
Understanding Virtual Reality Creation in the Classroom