The Inflation Spurt: The CEA on Historical Parallels

The Inflation Spurt: The CEA on Historical Parallels 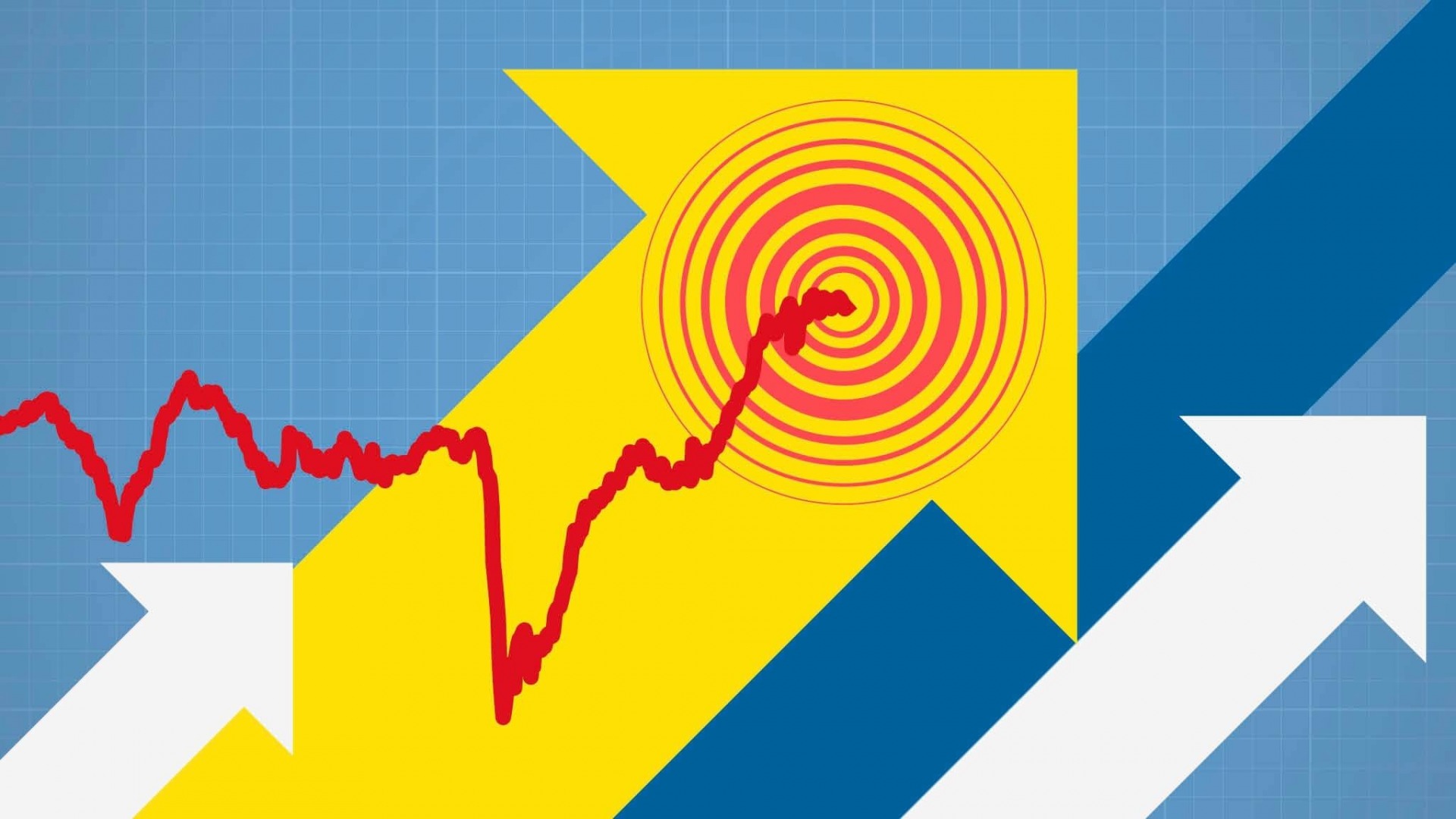 Reporting on the Consumer Price Price Index numbers for June looked like this:

Is the spurt of inflation the last few months likely to be sustained, or to fade? Chair of the White House Council of Economic Advisers Cecilia Rouse, along with Jeffery Zhang, and Ernie Tedeschi last week offered a short rumination on the “Historical Parallels to Today’s Inflationary Episode” at the CEA website (July 6, 2021).

Here’s a figure showing two prominent measures of inflation: the Consumer Price Index and the Personal Consumption Expenditures Index. The CPI is better-known to the public, but the PCE index is the one on which the Federal Reserve actually focuses (for my quick discussion of the differences between them, see here). For practical purposes, they move together fairly closely over time. On the far right, you can see the recent jump of inflation up to an annual rate of about 5%. 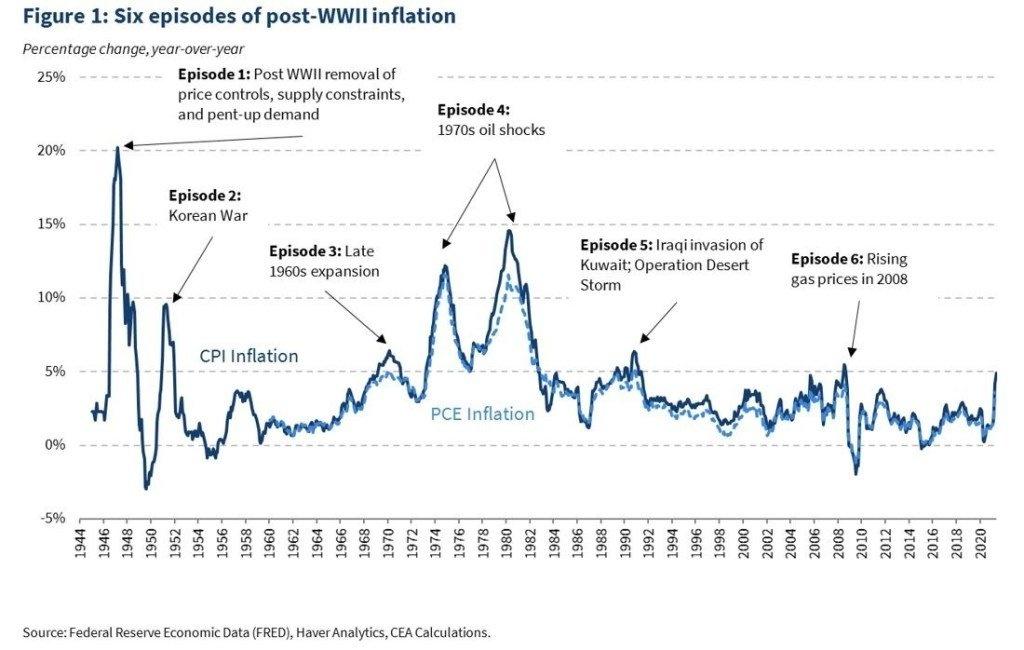 As the authors note, this figure shows six previous periods in which CPI inflation topped 5%: 1946–48, 1950–51, 1969–71, 1973–82, 1991, and 2008.  For the current episode, which parallel is most relevant? They argue that recent inflation spikes have been linked to rises in global oil prices, which hasn’t been happening, and that the inflation jump of the late 1960s was linked to an economy running white-hot with rapid growth and low unemployment, which isn’t the current problem, either.

The authors argue that the inflation of the 1970s was mainly the result of higher oil prices, as well, and while they are only writing a short piece, this seems to me like a significant oversimplification. There is sound evidence that in the lead-up to the 1972 election, the Federal Reserve under Arthur Burns responded to political pressure from President Richard Nixon by keeping interest rates very low in what was already an inflationary environment. There were also national wage and price controls first imposed and then removed by Nixon, and a later attempt to impose credit controls under Jimmy Carter. Of course, the 1970s spikes in oil prices didn’t help, either. But the inflationary period of the 1970s had number of contributing factors.

Ultimately, Rouse, Zhang, and Tedeschi argue that the most relevant parallel here is the post-WWII inflation episode. There are of course many differences. But as they point out, both the World War II period and the pandemic were times when savings rose substantially, suggesting the possibility of pent-up demand ready to surge into markets. Both episodes were also a time when economic dislocations meant that certain goods were not readily available; for example, the pandemic has been accompanied by shortages of durable goods like cars, in part because “manufacturing capabilities were temporarily shut down or reduced to avoid COVID contagion.”

It’s worth noting that in this short essay, Rouse, Zhang, and Tedeschi do not discuss the large and ongoing rise in federal debt. nor the role of the Federal Reserve in financing that debt, nor the potential for additional inflationary pressures from the existing spending proposals now before Congress. One can certainly sketch out a scenario along these lines where inflationary dangers look more severe. In particular, if consumers and firms expect a certain level of inflation, and then build that inflation rate into their expectations of future increases in prices and wages, then shorter-term inflation could build a longer-lasting momentum.

However, neither the markets nor the professionals seem to believe these scenarios. For looking at market expectations of inflation, you can compare two similar types of debt, one which adjusts for inflation and one which does not. For example, the US Treasury issues most of its debt in a way that does not adjust for inflation, but it also issues Treasury Inflation Protected Securities (TIPS), which adjust according to changes in the Consumer Price Index. Comparing these two will provide a market-based estimate of expectations of future inflation. Another measure of inflation looks at predictions from professional forecasters, which are tabulated in the Livingston Survey carried out by the Federal Reserve Bank of Philadelphia. Here are expectations of inflation from these two measures.

Those interested in some additional history of US inflation in the last 100 years or so might be interested in my post from a few years back, “100 Years of Consumer Price Inflation Data” (A[ril 30, 2014).The two measures as presented here are not exactly comparable, because the market-based inflation expectations are for five years ahead, while the Livingston survey is for 10 years ahead. But either way, it looks as if future inflation expectations are in the range of about 2%, which is often taken as a reasonable working definition of “price stability.”

View all
Why High Performing Organizations Don’t Leave Development to Chance
How To Get More Work Coming Your Way As A Property Manager?
11 Reasons Why Annual Reports Are Important
Top Reasons English Is a Global Language, and You Should Learn It in 2022
Why Workplace Injuries Can Happen Even in Offices and How to Reduce the Risks
Roof Maintenance Tips for Businesses: How to Keep Company's Premises Safe
Green Blockchain Plays a Major Part in Fending Off Climate Change
8 Great Ways to Help You Save Energy
How Blockchain Technology is Reinventing The Power Grid
How Blockchain and IoT Collectively Reshape Food Production
4 Ways To Make Sustainability A Part Of Your Everyday Life
Are Mushrooms the Future of Fashion?
Compliance Management is Reforming: Can Revenue Generation be a Possibility?
Bank of England (BoE) Steps in to Calm Down Financial Markets
Markets Crash as Monetary Laughing Gas Fades
More Than 30% of British Adults Are Involved in Entrepreneurship
How To Cancel Timeshare Legally Without Being Scammed
Understanding Personal Financial Management: What You Need To Know
Some Economics of Tobacco Regulation
Some Human Capital Controversies and Meditations
US Unions and Alternative Voices for Labor
Core Inflation Soars, Retail Sales Weaken
Labor Economics: Quiet Quitting, Firing, Mental Health and Productivity
The Slowdown of U.S. Productivity Sector
King Charles III's New Royal Cypher Revealed
76 Theses on American Patriotism
Why Are More People Becoming Right Wing?
A New Law That May Impact Prince Andrew, Princess Beatrice and Prince Harry
King Charles Meets Northern Ireland's Political Leaders During Historic Visit
The Role Machine Learning in Tracing Historical Events
Why You Should Always Put Your Wellbeing Before Other Matters
Brilliant Thinkers Relish Ambiguity, Dull Thinkers Loathe It
Treating Anxiety with VR Technology
The Rise of Telemedicine
You Want Straight Teeth, But Don't Like The Looks Of Braces? Here's The Solution
What Should Hospitals Add To Ensure Maximum Patient Comfort
Why You Should Not Lead If You Aren’t Authentic
How to Transition your Culture as you Scale your Organisation with Darrin Jahnel
Why Is It So Hard To Learn From Our Mistakes?
35 Hidden Countries
How To Know If You're Ready For The Next Step In Your Relationship
Toward a More Spiritual You
Looking for a PC that Caters to Your Requirements? Here's a Brief Guide
AR and IoT Applications for Industrial Verticals
Resolve the Data Discrepancy Conundrum in Your Supply Chain Cycles with Blockchain
How to Write Website Content that Drives Traffic
6 Things You Should Know About How Search Engines Function
Changing Tides at NAMIC

Why You Should Not Lead If You Aren’t Authentic
Why High Performing Organizations Don’t Leave Development to Chance
Compliance Management is Reforming: Can Revenue Generation be a Possibility?
Bank of England (BoE) Steps in to Calm Down Financial Markets
How to Transition your Culture as you Scale your Organisation with Darrin Jahnel