Why Has Global Wealth Grown So Quickly?

Why Has Global Wealth Grown So Quickly? 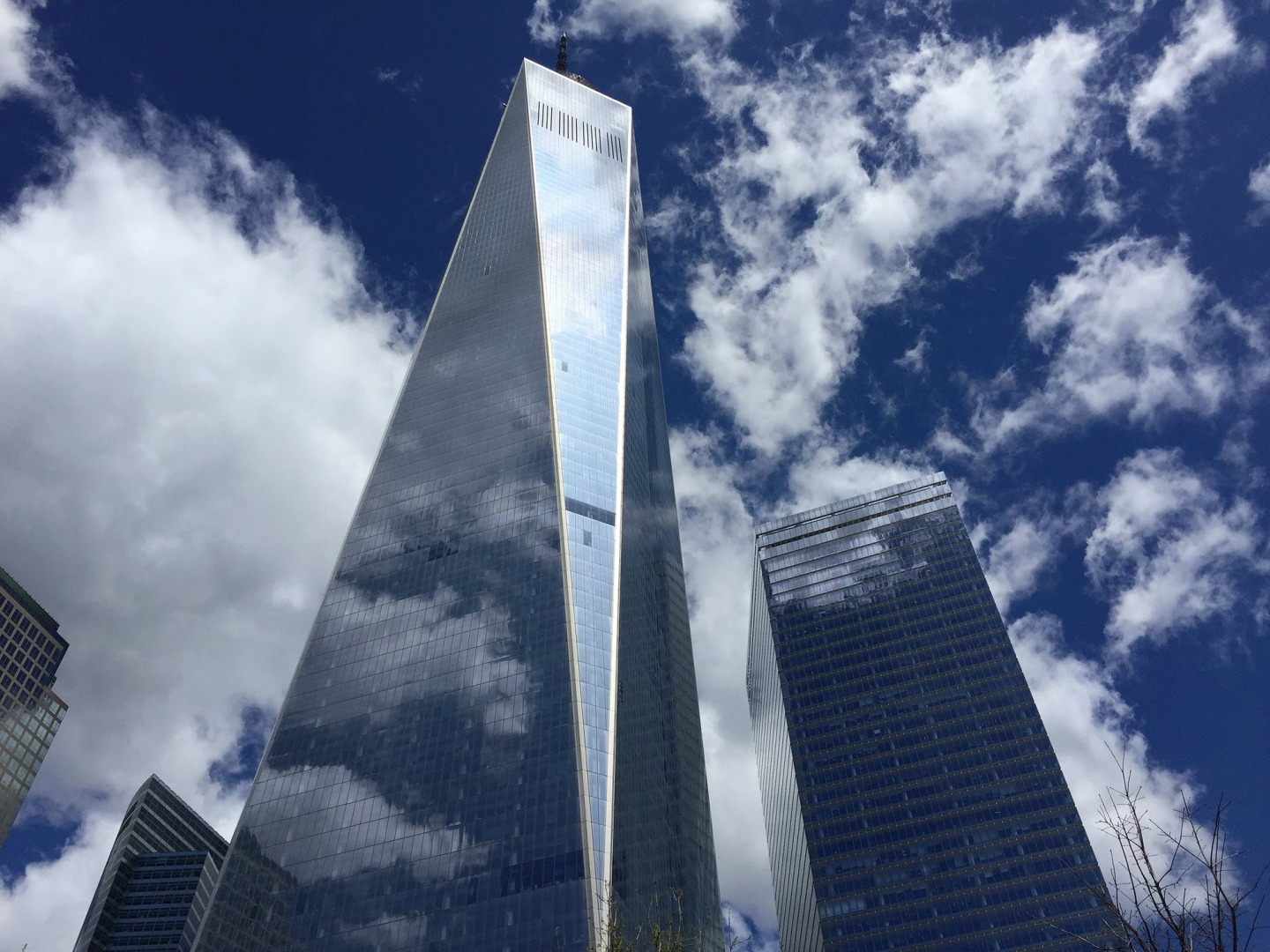 For example, wealth in real estate will be linked to the income that people have available to pay for housing. Wealth in the form of corporate stock should be linked to the profits of companies. From the 1970s up through the 1990s, for the global economy as a whole, total wealth was a multiple of about 4.2 times GDP. But for the last couple of decades, the ratio of wealth/GDP has been rising, and is now a multiple of about 6.1 times GDP. The McKinsey Global Institutelays out some facts and offers some possible interpretations in “The rise and rise of the global balance sheet: How productively are we using our wealth?” (November 15, 2021).

The report focuses on ten countries that make up about 60% of world GDP: Australia, Canada, China, France, Germany, Japan, Mexico, Sweden, the United Kingdom, and the United States. For each country, the wealth has three main components: “real assets and net worth; financial assets and liabilities held by households, governments, and nonfinancial corporations; and financial assets and liabilities held by financial corporations.”Here’s the pattern of wealth/GDP over time for those countries: 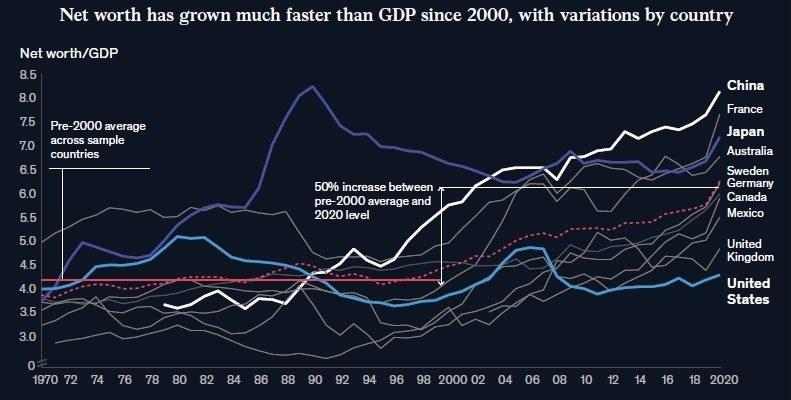 It’s interesting to note that the United States is not leading the way here in growth of national wealth. In the more detailed discussion, while it’s true that wealth in the form of real estate and corporate stock values has been rising in the US, it’s also true that foreign ownership of US wealth has been rising faster than US ownership of foreign wealth, which has kept the overall US ratio relatively unchanged.

The MGI report describes the overall dynamics this way:

Thus, the report notes: A central finding from this analysis is that, at the level of the global economy, the historical link between the growth of wealth, or net worth, and the value of economic flows such as GDP no longer holds. Economic growth has been sluggish over the past two decades in advanced economies, but net worth, which long tracked GDP growth, has soared in relation to it. This divergence has emerged as asset prices rose sharply—and are now almost 50 percent higher than the long-run average relative to income. The increase was not a result of 21st-century trends such as the increasing digitization of the economy. Rather, in an economy increasingly propelled by intangible assets, a glut of savings has struggled to find investments offering sufficient economic returns and lasting value to investors. These (ex-ante) savings have instead found their way into a traditional asset class, real estate, or into corporate share buybacks, driving up asset prices.

One possible explanation for this growth in wealth would be if these major world economies were going through a major investment boom, in which case the additional wealth might be a natural reflection of the much greater productive capacity. But that doesn’t seem to be the main story. Instead, most of the gain in wealth and most of the world’s wealth instead exists in the form of real estate. The MGI report puts it this way:

Two-thirds of global net worth is stored in real estate and only about 20 percent in other fixed assets, raising questions about whether societies store their wealth productively. The value of residential real estate amounted to almost half of global net worth in 2020, while corporate and government buildings and land accounted for an additional 20 percent. Assets that drive much of economic growth—infrastructure, industrial structures, machinery and equipment, intangibles—as well as inventories and mineral reserves make up the rest. Except in China and Japan, non-real estate assets made up a lower share of total real assets than in 2000. Despite the rise of digitization, intangibles are just 4 percent of net worth: they typically lose value to competition and commoditization, with notable exceptions. Our analysis does not address nonmarket stores of value
such as human or natural capital.

What possible scenarios could emerge from this shift in the wealth/GDP ratio? There’s basically a happy interpretation and a not-so-happy one. The MGI report puts it this way:

In the first view, an economic paradigm shift has occurred that makes our societies wealthier than in the past relative to GDP. In this view, several global trends including aging populations, a high propensity to save among those at the upper end of the income spectrum, and the shift to greater investment in intangibles that lose their private value rapidly are potential game changers that affect the savings-investment balance. These together could lead to sustainably lower interest rates and stable expectations for the future, thereby supporting higher valuations than in the past. While there was no clear discernible upward trend of net worth relative to GDP at global level prior to 2000, cross-country variation was always large, suggesting that substantially different levels are possible. High equity valuations, specifically, could be justified by attributing more value to intangible assets, for instance, if corporations can capture the value of their intangible investments more enduringly than the depreciation rates that economists assume. …

In the opposing view, this long period of divergence might be ending, and high asset prices could eventually revert to their long-term relationship relative to GDP, as they have in the past. Increased investment in the post pandemic recovery, in the digital economy, or in sustainability might alter the savings-investment dynamic and put pressure on the unusually low interest rates currently in place around the world, for example. This would lead to a material decline in real estate values that have underpinned the growth in global net worth for the past two decades. At current loan-to-value ratios, lower asset values would mean that a high share of household and corporate debt will exceed the value of underlying assets, threatening the repayment capacity of borrowers and straining financial systems. We estimate that net worth relative to GDP could decline by as much as one-third if the relationship between wealth and income returned to its average during the three decades prior to 2000. … Not only is the sustainability of the expanded balance sheet in question; so too is its desirability, given some of the drivers and potential consequences of the expansion. For example, is it healthy for the economy that high house prices rather than investment in productive assets are the engine of growth, and that wealth is mostly built from price increases on existing wealth?

I have no clear idea what the probability is of the negative scenario–that is, a substantial collapse of wealth holdings around the world. The figure above suggests that the effect might be a little more moderate for the US economy than for some others. But a global wealth collapse would be rugged news for the financial sector, as well as for the future financial plans of people and companies. The MGI report suggests that there may be a way to thread the needle here. If one is concerned about the possibility of a wealth collapse, one way to cushion the blow would be to focus on redirecting wealth and capital away from real estate and toward investment-type options that will tend to increase future productivity. The report notes: “[R]edirecting capital to more productive and sustainable uses seems to be the economic imperative of our time, not only to support growth and the environment but also to protect our wealth and financial systems.”