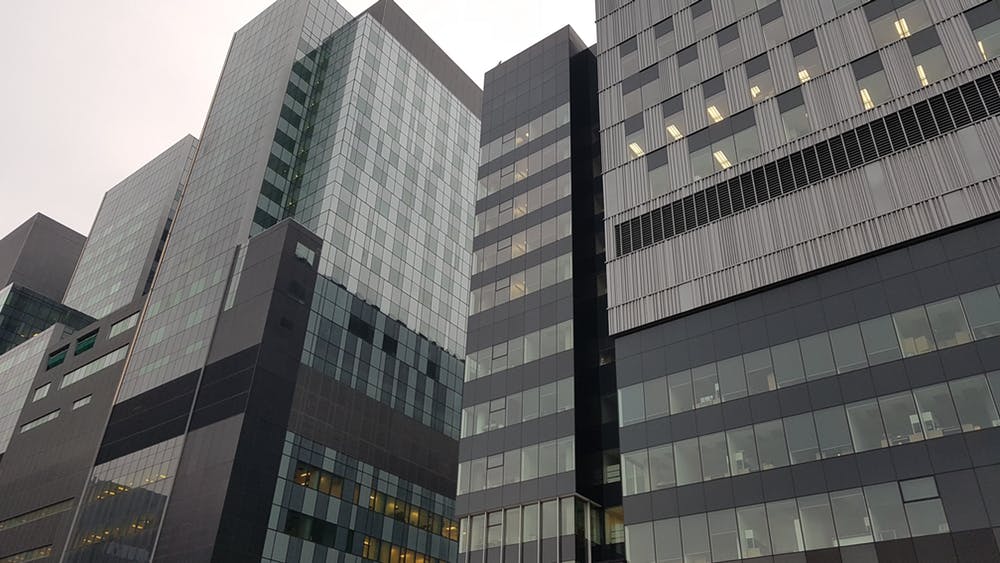 How much should we be worried? As I've noted in past discussions of the subject, several Fed officials including Lael Brainerd of the Fed Board of Governors and Robert Kaplan of the Federal Reserve Bank of Dallas (who will rotate on to the membership of the Federal Open Market Committee in 2020) have raised concerns. Sirio Aramonte and Fernando Avalos offer a nice short discussion of this comparison in "Structured finance then and now: a comparison of CDOs and CLOs," which appears in the BIS Quarterly Review (September 2019, pp. 11-14). They write: "The rapid growth of leveraged finance and CLOs has parallels with developments in the US subprime mortgage market and CDOs during the run-up to the GFC. We examine the CLO market in light of that earlier experience."

Here's some backstory. The collateralized debt obligation of concern back in 2007 were a set of financial securities that were based on pools of subprime mortgages. There's nothing wrong with collecting mortgages into a pool, packaging them into a security, and then reselling them to investors like insurance companies, pension funds, hedge funds, and banks.

But the problem with creating a financial security based on subprime mortgages was that--by the definition of "subprime"--a relatively high percentage of these mortgage were going to default, so a financial security based on these subprime mortgages would be fairly risky. For example, banks would not be allowed by regulators to hold such securities. However, some financial wizardry solved that problem.  The CDOs were divided up into sections, called "tranches," with some of the tranches being very risky and some being very safe. For example, if losses on the underlying subprime mortgages were in the range of 0-10%, then all of those losses would fall on one set of investors in the highest-risk tranche. If losses on the underlying subprime mortgages fell in the range of 10-20%, then those losses would fall entirely on another set of investors in the next highest-risk tranche. With several of these tiers built into place, so that any losses would be concentrates on a subset of investors, the other tranches of the CDO appeared to be very safe: indeed, those tranches were rated AAA and banks were allowed to hold them.

The current wave of collateralized loan obligations are also financial securities based on pools of debt--but in this case, the debts are corporate loans rather than subprime mortgages. Again, there';s nothing wrong with collecting debt into a pool, packaging it into a security, and reselling it to investors. This kind of corporate debt is called  "leveraged loan." As Aramonte and Avalos write:

CDOs and CLOs are asset-backed securities (ABS) that invest in pools of illiquid assets and convert them into marketable securities. They are structured in tranches, each with claims of different seniority over the cash flows from the underlying assets. The most junior or so-called equity tranche is often unrated and earns the highest yields, but is the first to absorb credit losses. The most senior tranche, which is often rated AAA, receives the lowest yields but is the last to absorb losses. In between are mezzanine tranches, usually rated from BB to AA, which start to absorb credit losses once the equity tranche is wiped out. The larger the share of junior tranches in the capital structure of the pool, the more protected the senior tranche (for a given level of portfolio credit risk).

The market for collateralized loan obligations has grown quickly. For comparison, the size of the total market for CDOs in 2007 $1.2 trillion-$2.4 trillion, and the size of the total market for CLOs at present is $1.4 trillion to $2.0 trillion. In addition, investors (facing low interest rates elsewhere) are eager to buy CLOs--which means that the credit standards for such loans have deteriorated.  Aramonte and Avalos write:

For both CDOs and CLOs, strong investor demand led to a deterioration in underwriting standards. For example, US subprime mortgages without full documentation of borrowers’ income increased from about 28% in 2001 to more than 50% in 2006. Likewise, leveraged loans without maintenance covenants increased from 20% in 2012 to 80% in 2018. In recent years, the share of low-rated (B–) leveraged loans in CLOs has nearly doubled to 18%, and the debt-to-earnings ratio of leveraged borrowers has risen steadily. Weak underwriting standards can reduce the likelihood of defaults in the short run but increase the potential credit losses when a default eventually occurs.

Here are a couple of images: one showing the rise in the leveraged loan market, the other showing that borrowers with more debt have an increasing share of the market and that "covenant-lite" loans with fewer protections for investors have been on the rise. 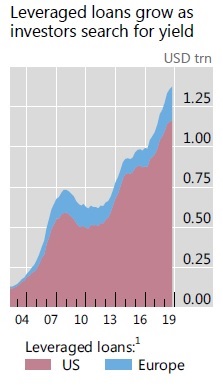 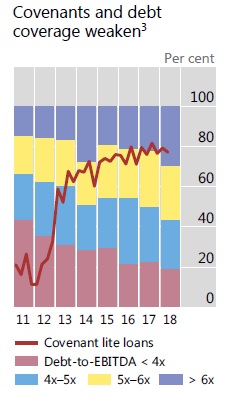 Thus, the concern is over a scenario where the economy gets a negative shock. The risk of leveraged loans rises. Some investors start trying to sell off those loans, but in a situation where everyone is trying to sell, the prices are going to be low--which encourages even more investors to try to sell. Banks see the value of their holdings of CLOs is falling, which raises concerns for bank regulators. Some banks also find that, although they had not quite realized it, they are connected to that they have connection to these other parts of the financial industry through legal and reputational ties, or because they have open lines of credit outstanding to these other companies. Ultimately, companies find it much harder to borrow, and banks become less willing to lend to consumers, too. Say it all in one long breath, and it's a recipe for recession.

But while the parallels from CDOs to CLOs are are suggestive, and reason for a moderate degree of concern, there are also meaningful differences.

The CDOs of 2007 were all based on housing, and thus were all vulnerable to a common shock. The CLOs of 2019 are more diversified because they are spread across industries, and not all industries are likely to become vulnerable in the same way at the same time.

The CDOs of 2007 became entangled in other types of complexity. For example, the financial wizards started off with subprime mortgages and then created CDOs with tranches. But then they took tranches from separate CDOs and combined the tranches into a new CDO--sometimes called a CDO-squared--with tranches of its own. CDOs also became entangled with a market for "credit default swaps," a way of buying insurance against a decline in your CDO tranche. Selling that "credit default swap" insurance was a big part of what drove the insurance company AIG into bankruptcy and a federal bailout. The financial structure of the recent wave of CLOs has not (so far!) been complicated with these kinds of additional complications. If stress does occur in the CLO market, it will be a lot easier to identify the risks and who is facing them.

Yet another issue is that back in 2008, banks were often investing in CDOs through another bit of financial wizardry called a "special-interest vehicle," which was technically separate from the bank and thus off the bank's balance sheet, but where the bank would suffer if losses occurred. But banks that own CLOs are owning them directly and clear, not through a veiled financial transaction. Again, if risks occur, those risks should be much more clear.

Bottom line: CLOs aren't the new CDOs, at least not yet. But perhaps cast a weather eye in their direction, now and then, just in case.