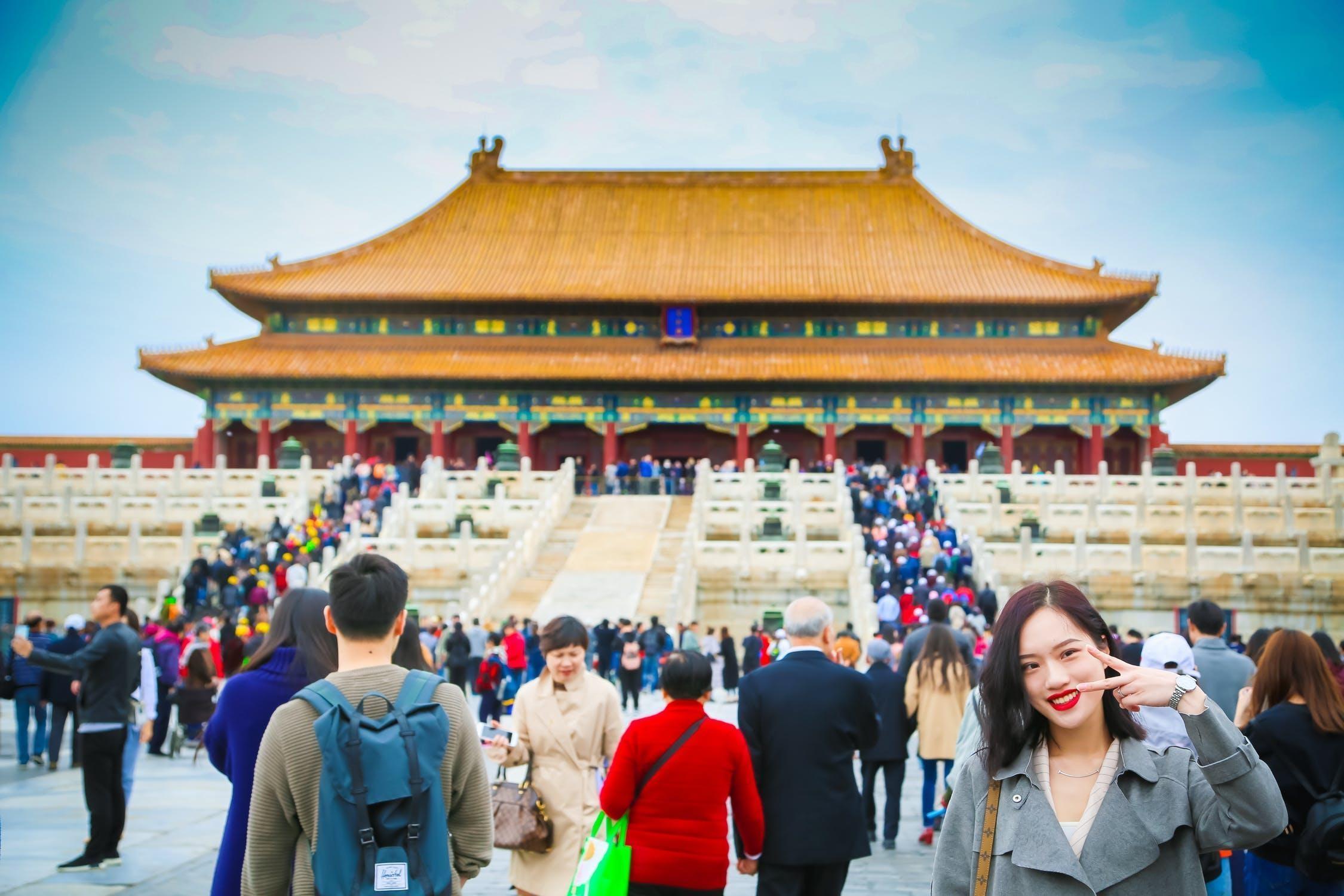 China has a remarkably high savings rate in a typical year--and sometimes its higher than that. In fact, the main reason for China's high trade surpluses is that with such a high savings rate, China doesn't consume either a lot of imports or domestically produced goods. A reason that China can invest so much, year after year, is that the investment is financed by high savings rates. A standard recommendation for China's economy for at least the last 15 years or so is to "rebalance" toward being an economy driven by domestic consumption, not by investment.

A team of economists from the IMF--Longmei Zhang, Ray Brooks, Ding Ding, Haiyan Ding, Hui He, Jing Lu, and Rui Mano--discuss these issues and others in "China’s High Savings: Drivers, Prospects, and Policies,"written as IMF Working Paper WP/18/277 (December 11, 2018). 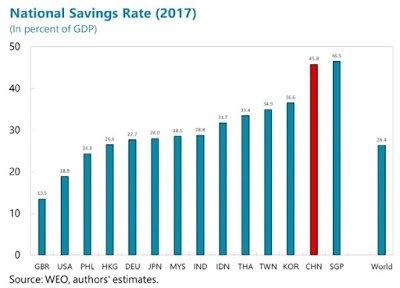 To get a sense of what these high rates of saving imply for the mixture of consumption and investment in an economy, consider this figure. The horizontal axis shows a country's level of consumption; the vertical axis shows its level of fixed capital investment. China is way in the upper left, with low consumption and high investment. The authors write: "With GDP per capita in PPP terms being similar to Brazil’s, consumption per capita in China is only comparable to Nigeria. If Chinese households consumed comparably to Brazilian households, their consumption levels would be more than double." One sometimes hears saying applied to China: "Country rich, people poor." The high savings rate is why it can feel that way. 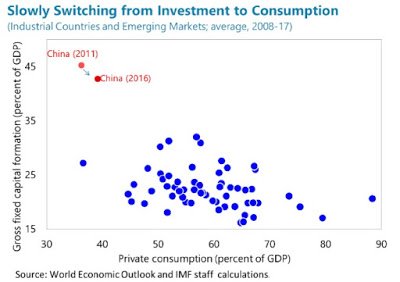 Government in China has not run especially large budget deficits or budget surpluses, so the mixture of household and corporate saving is what drives China's high savings rate. Corporate savings in China were quite high in the early 2000s, but as a percent of GDP are now pretty much in line with global averages. China's high savings rate thus traces to its household sector. The authors write:

Household savings in China have been trending up since the early 1990s and peaked at 25 percent in 2010 and moderated slightly in recent years. Globally, household savings have been falling (from 14 percent of GDP in 1980 to about 7 percent today). The diverging trend has led to an increasing gap between China and the rest of the world. At 23 percent of GDP, today China’s household savings are 15 percentage points higher than the global average and constitute the main drivers of higher national savings in China.

Why do China's households save so much? Some of the likely factors include:

Low birthrates and the one-child policy meant less need to spend on children, but less ability to rely on children in retirement--and thus an incentive for more saving. This can explain perhaps half of the rise in China's household savings rate in recent decades.

As China's economy shifted from state-owned to privately owned firms in the 1990s, the safety net got a lot thinner. The authors write:

For example, the health care coverage of urban workers declined by 17 percentage points between 1990 and 2000. Furthermore, the average replacement rate for urban workers (pension benefits in percent of wages) dropped sharply from close to 80 percent to below 50 percent (He at al., 2017). Nationwide, individuals have been paying increasingly larger shares of healthcare expenditures out of pocket, rising from 20 percent in 1978 to a peak of 60 percent in 2000. In addition, households also began paying more for education out of their own pocket, rising from 2 percent in 1990 to 13 percent in 2001.

Households saved so that they could invest in housing, both as a store of wealth and as an investment that has delivered high returns in the last 15-20 years.

Up until just a few years ago, the options for making financial investments were fairly limited. Interest rates were controlled, and many people didn't have access to a wide range of other financial instruments. So if you wanted to accumulate a certain level of wealth by retirement, and your financial options paid only low interest rates, you had to save a lot.

Where is China's high savings rate headed? Countries across east Asia have seen their household saving rate rise in a way similar to China, but then decline fairly rapidly. The authors write:

As China's population ages, household savings rates will decline and public pressures for more spending on pensions and health care will rise. Thus, the movement to lower savings rates could be reinforced if China's government shifted its pattern of spending from investment-heavy to more consumption-heavy. Here's a figure showing public investment as a share of GDP across a number of countries. 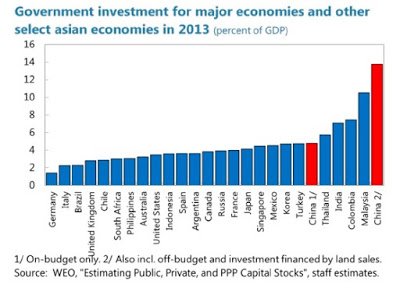 And here's a figure showing government spending on consumption-related areas like health, education, social assistance, and pensions. The red diamond shows average levels of spending in these areas as a share of GDP for OECD countries. The yellow diamonds show the average for emerging markets around the world. The blue bars show China. 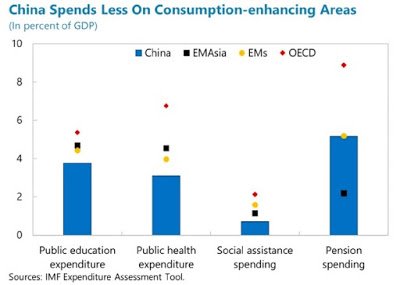 In a low-saving, low-investment economy like the US, it's a little hard to conceive that it's possible for savings and investment rates to be too high for a country's economic health. But that's where China has been, and shifting away from established patterns is rarely simple.