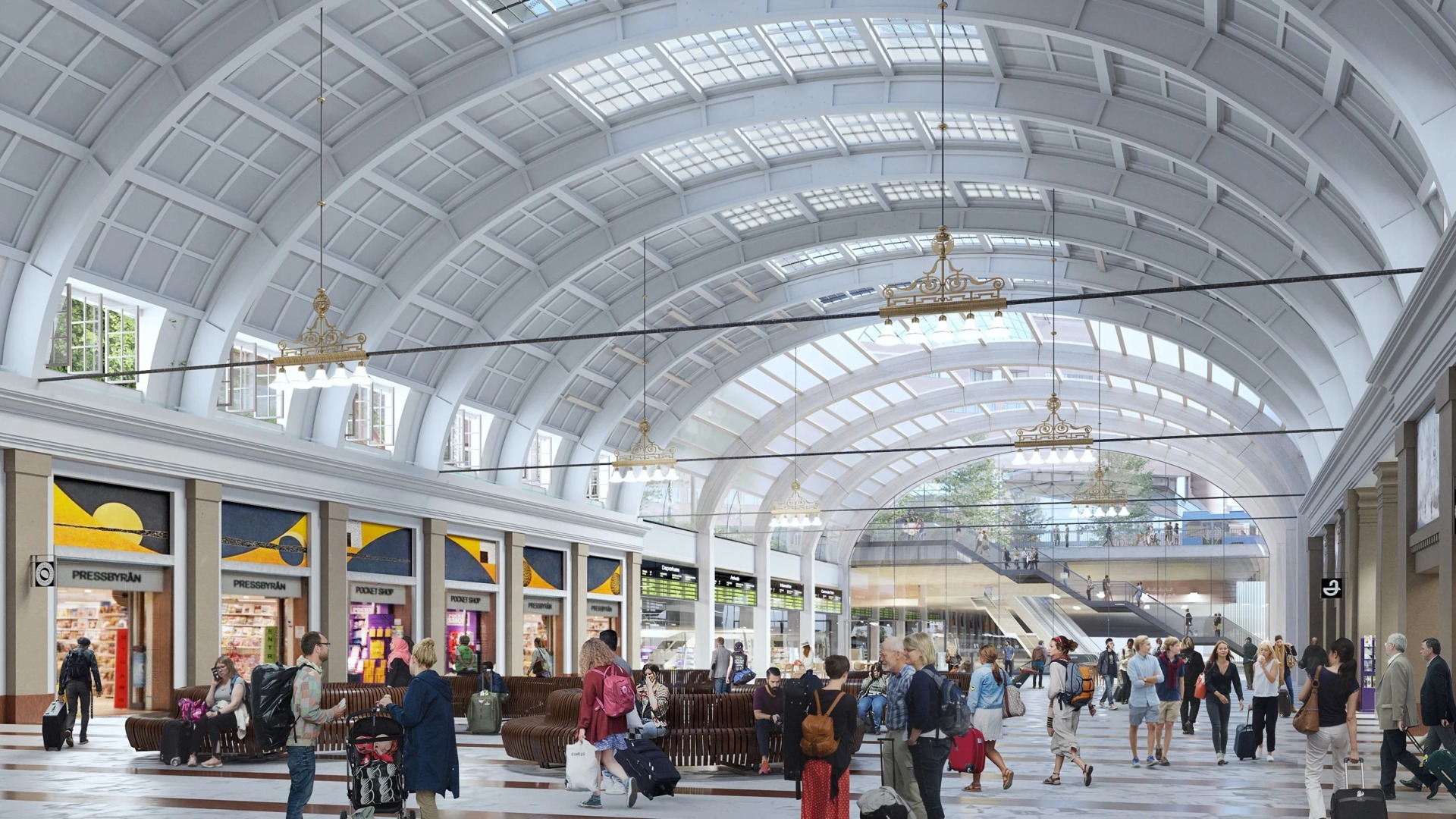 Global population will surpass 8 billion in just a few weeks on November 15, 2022, according to projections from the United Nations in its World Population Prospects 2022.

I’m perhaps less concerned about global population growth than some commenters, because predictions about a population apocalypse have been around for a long time without coming true. But population changes do reflect underlying changes in life expectancy and birth rates in ways that shift age distributions and family patterns. In addition, shifts in where the global population lives will alter the shape of international politics in future decades.

Here’s the basic population pattern from the UN demographers from 1950 to 2050. Total population (blue line) is rising. It’s projected to top out at about 10.4 billion in the 2080s. The growth rate of the population (yellow line) has been falling to less than 1% annually, and heading lower. The UN describes the underlying patterns of life expectancy and birth rates this way:

Population growth is caused in part by declining levels of mortality, as reflected in increased levels of life expectancy at birth. Globally, life expectancy reached 72.8 years in 2019, an increase of almost 9 years since 1990. Further reductions in mortality are projected to result in an average longevity of around 77.2 years globally in 2050. … In 2021, the average fertility of the world’s population stood at 2.3 births2 per woman over a lifetime, having fallen from about 5 births per woman in 1950. Global fertility is projected to decline further to 2.1 births per woman by 2050. … Given that most population increase until 2050 will be driven by the momentum of past growth, further actions by Governments aimed at reducing fertility would do little to slow the pace of growth between now and midcentury, beyond the gradual slowdown indicated by the projections presented here.

The increase in population is surely a matter for continued close attention, for economic, environmental and political reasons. But there have been prominent predictions of global overpopulation leading to mass famine for centuries now. Yes, predictions that have been wrong for centuries could still come true in the future. But before jumping to such conclusions, it’s worth taking a moment to acknowledge that the past predictions of overpopulation leading to a sharp degradation of living standards have been wrong, and to think about why.

For economists, the classic predictions of overpopulation are those of Thomas Robert Malthus in his 1798 Essay on the Principle of Population. Malthus argued that the growth of food supply happened in a linear way, while the growth of population happened in a geometric way. Thus, with population growing at a certain percentage rate each year, it would at some point spike upward beyond the food supply. Malthus didn’t provide a numerical estimate of the timing, but the general sense was that this shift was perhaps a few decades in the future. Global population was about 800 million when Malthus was writing, so the world population has grown 10-fold. The missing ingredient in Malthus’ reasoning was that food supplies–and in general economic growth–doesn’t need to happen in a linear way, but as a result of technological change it can also be geometric. There may be a race between the growth rates of population and food supply at certain times and places, but it is not a race that food supply is fated to lose.

A more recent example is Paul Erhlich’s 1968 best-seller The Population Bomb, which opened with the words: “The battle to feed all of humanity is over,” and predicted that hundreds of millions of people would starve to death in the 1970s and that the world death rate would rise substantially. Instead, it’s life expectancy that has risen substantially. And according to the World Bank, about 40% of the world population was below an international poverty line consumption level of $2.15 per day in 1985, but that share has now fallen to 8.4% by 2019. Like Malthus more than 150 years earlier, Ehrlich failed to appreciate the potential of technology–like the Green Revolution in agricultural technology–to expand food output.

Thus, while I know that a higher global population will raise difficult issues, the historical record strongly suggests that cries of looming catastrophe have been overdone. It also suggests that the ultimate answers may involve developing new technologies.

The growth of the global population is not evenly distributed around the world. Indeed, it will shake up some long-term patterns. Perhaps most notably, the UN predicts that India will become the world’s most populous country, outstripping China, next year. Here are some shifts in the world’s most-populous countries over time. The rise in the population rankings of Nigeria, Ethiopia, and Dem. The Republic of the Congo by 2050 is part of a regional shift: the region of Africa will make up a larger share of the global population. We are used to a world where the regions of Asia (light blue and dark blue lines) are the largest by population. But population growth in those regions has slowed. By about 2050, the region of sub-Saharan Africa will have almost caught up in the total regional population. Thus, the issues of economic development for that region, and possibilities of out-migration from that region if development doesn’t take hold, are likely to loom especially large in the next few decades. View all
The Benefits Of Electrical Equipment Preventive Maintenance
It’s Time To Replace RPA With IPA In Recruitment Procedures
A Recruitment Technology That Goes Beyond CV Keywords
Diversify Your Company with Auxiliary Services
4 Things You Need To Start Building Your Personal Brand
Big Data's Role in Investment Management
Blackstart: How the Grid Gets Restarted & Why It Matters
Help After a Hurricane: Rebuilding Finances After a Storm
Everything You Need to Know About Climate Change
How The Internet of Things Can Promote More Sustainability
Expert Tips To Create An Environmentally Conscious Workplace
Climate Emergency Innovations and Insights in Business
Considering A Remodel? Here Are 6 Tips To Stay On Budget
Applications of Neural Networks in the Insurance Industry
When Should You Get an Emergency Loan
Why Do You Need Car Insurance?
A Short Guide to Employee Group Life Insurance
Benefits of VR L&D Training for Higher ROI
Updates on the Social Cost of Carbon
Female Autonomy and Economic Development
Marwan Kheireddine: Going ‘Back to Basics’ Can Rescue Lebanon’s Economy
The Challenges of Measuring Discrimination Against LGBTI Individuals
When Surrounded By Exponential Growth, “Wait and See” Can Mean Missing An Opportunity
HR Digital Transformation and the Rise of AI in the Corporate World
The Safest and Most Dangerous Places to Work in the UK
Investment Charges When Mexico Privatized Social Security
Henry Adams on the Corruptions of Power
Former Pakistan Prime Minister Imran Khan Shot in Foot in Clear Assassination Attempt
Benjamin Netanyahu Set to Return as Israel's Prime Minister
Reflections on Sources of US Energy Consumed
Artificial Intelligence Can Help Therapists Ease Mental Healthcare
Can Artificial Intelligence Surpass Racial Bias?
6 Tips To Help You Stay Looking Young
The Science Behind Hydroponic Food Systems
How Big Data, AI, IoT and Deep Learning Are Powering Modern Healthcare
The Top 6 Probiotic Strains for Gut Health
Allez Le Maroc—World Cup 22
How To Choose The Right Glasses For The Shape Of Your Face
Everybody Starts Someplace
6 Types Of Exercise Everyone Should Do On A Regular Basis
Higher Education and Critical Thinking
What Is A Wrongful Death And How To React In Such Situations
Making AI Real - From Data to Wisdom
How Computer Vision is Transforming the Retail Industry
Is Your Mobile Plan Working for You? 3 Signs You May Need to Switch
How To Find The Top Healthcare IT Specialist
What Is Domain Name Registration and How Is It Done?
The Boring Technology Transformation