Goods, Services, and Inventories Since the Pandemic Recession

Goods, Services, and Inventories Since the Pandemic Recession 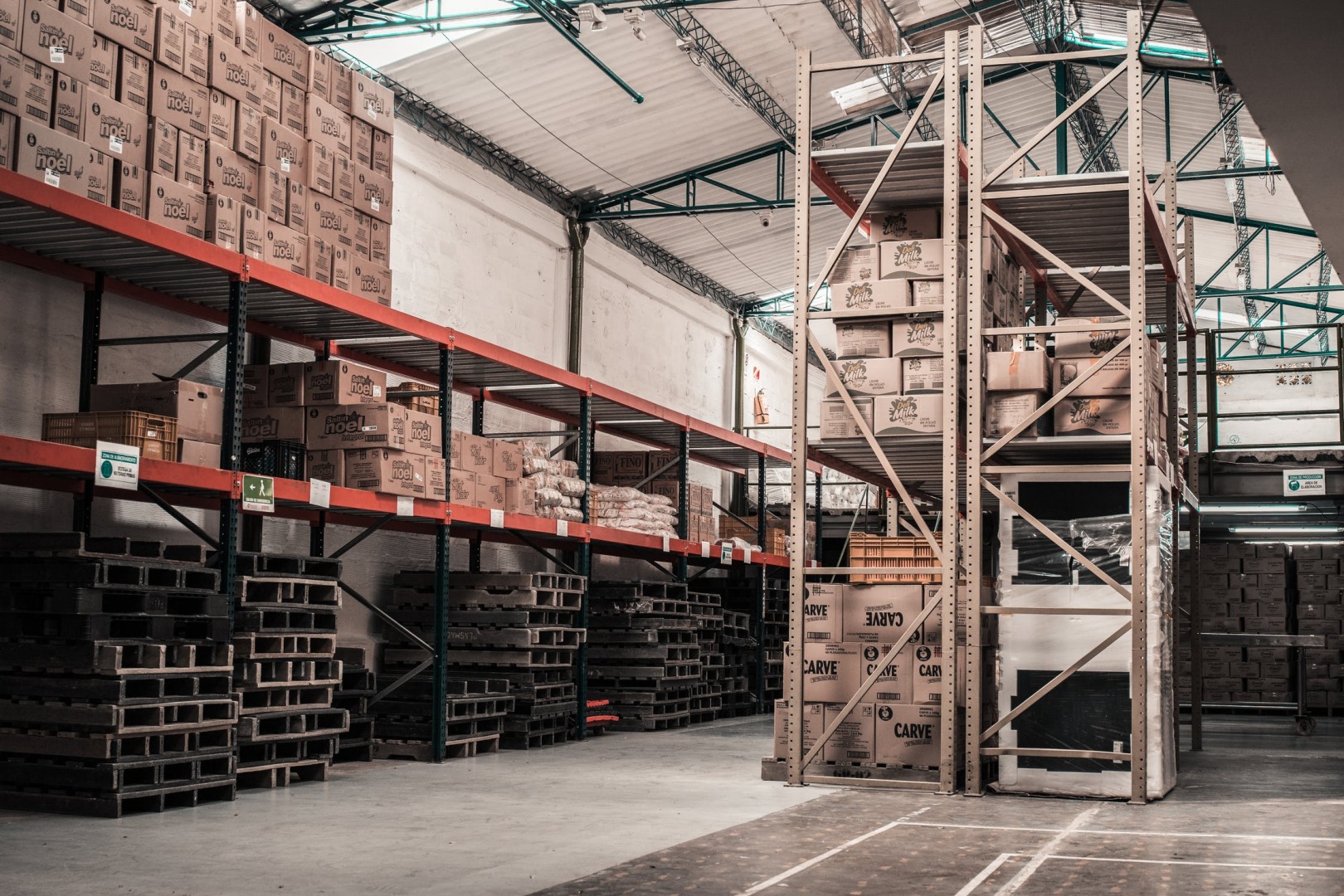 The short, sharp pandemic recession was different. With a combination of stay-at-home behavior, risk aversion, and official lockdowns, consumption of services dropped substantially and has not yet fully recovered. Meanwhile, consumption of goods dropped briefly, but quickly rebounded to above the pre-pandemic levels.

Mitchell Barnes, Lauren Bauer, and Wendy Edelberg provide a useful figure illustrating these dynamics for one of their “11 Facts on the Economic Recovery from the COVID-19 Pandemic” (Hamilton Project at the Brookings Institution, September 2021). They point out that the US economy has re-attained its pre-pandemic size in the second quarter of this year. But as production of services has not yet fully recovered, production of goods has climbed. The four lines on each graph show the four most recent recessions. The purple line shows the unusually high rise in goods consumption on the left and the unusual drop in services consumption on the right. 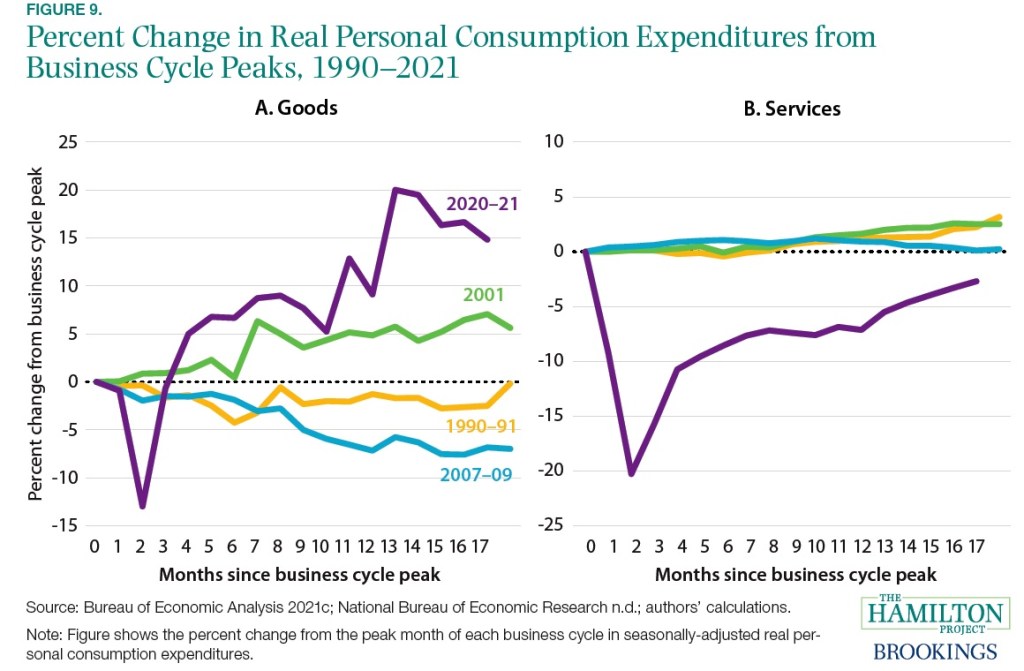 This unexpectedly high consumption of goods, combined with disruptions of supply chains, has created some unusual situations for inventories–that is, what is being held in stock to be sold later. Overall inventories held by businesses can be divided up into three categories: held by manufacturers, held by wholesalers, and what’s held by retailers.

The blue line in this figure shows overall business inventories, measured relative to sales. As you can see, inventories rise during recessions, as unsold goods sit on the shelves. Firms then reduce their ordering, and when demand picks up again after the recession, inventories drop for a time. One interesting fact is that the overall level of business inventories (blue line) has not dropped to unprecedented levels–it’s a 1.25 multiple of sales, similar to levels before and after the Great Recession. But if you focus in on retail inventories, shown by the red line, you can see that retailers (understandably) tended to hold more inventory than the business sector as a whole before the pandemic. But retail inventories have plunged to historically low levels, below the overall levels for the business sector as a whole. 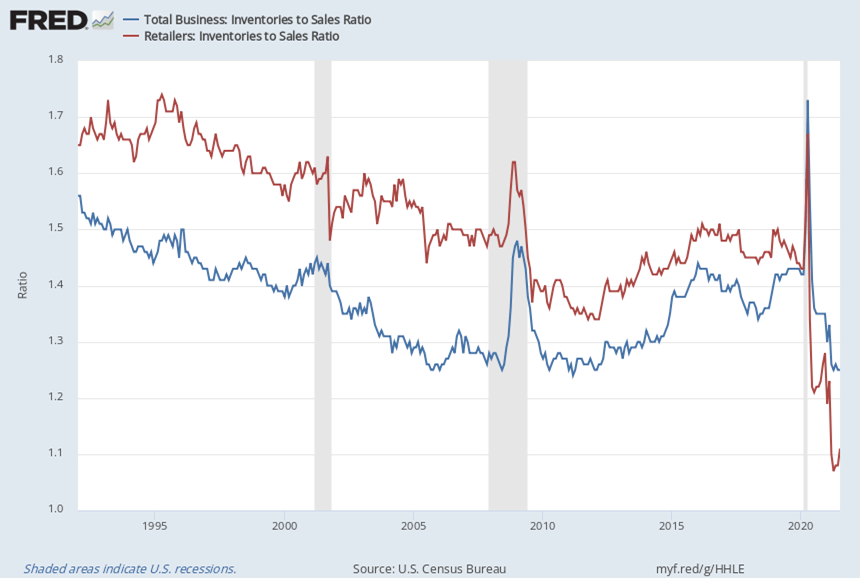 A more detailed breakdown within the retail category shows that some of the sectors with the biggest drop in inventories are motor vehicles, clothing stores, and department stores. 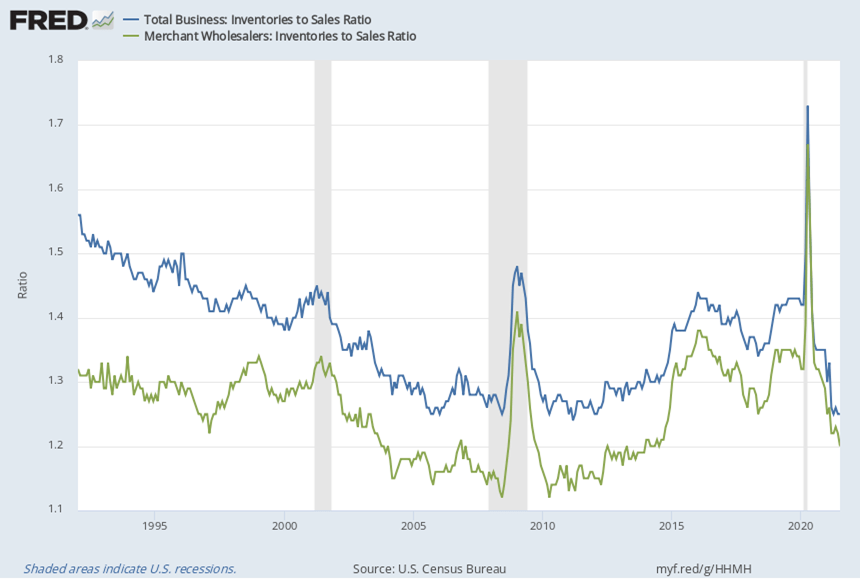 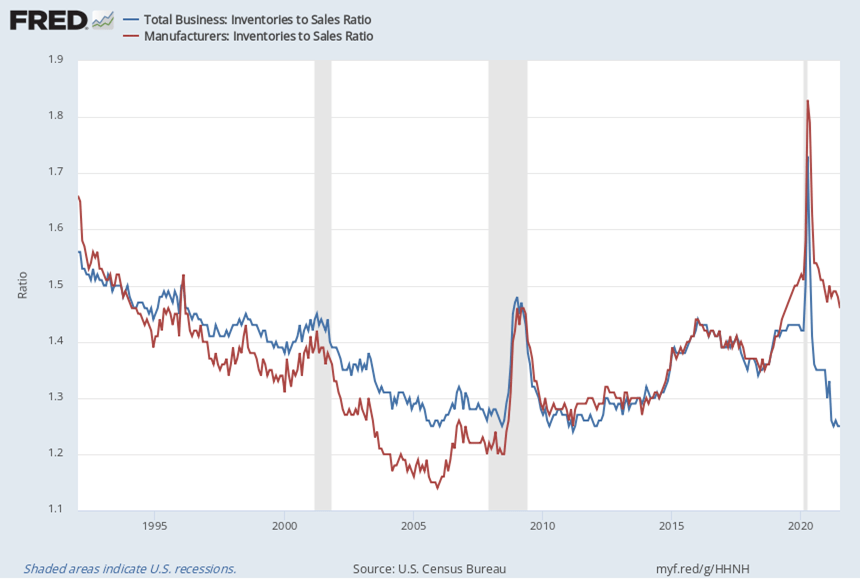