Have Americans Been Overworking?

Have Americans Been Overworking? 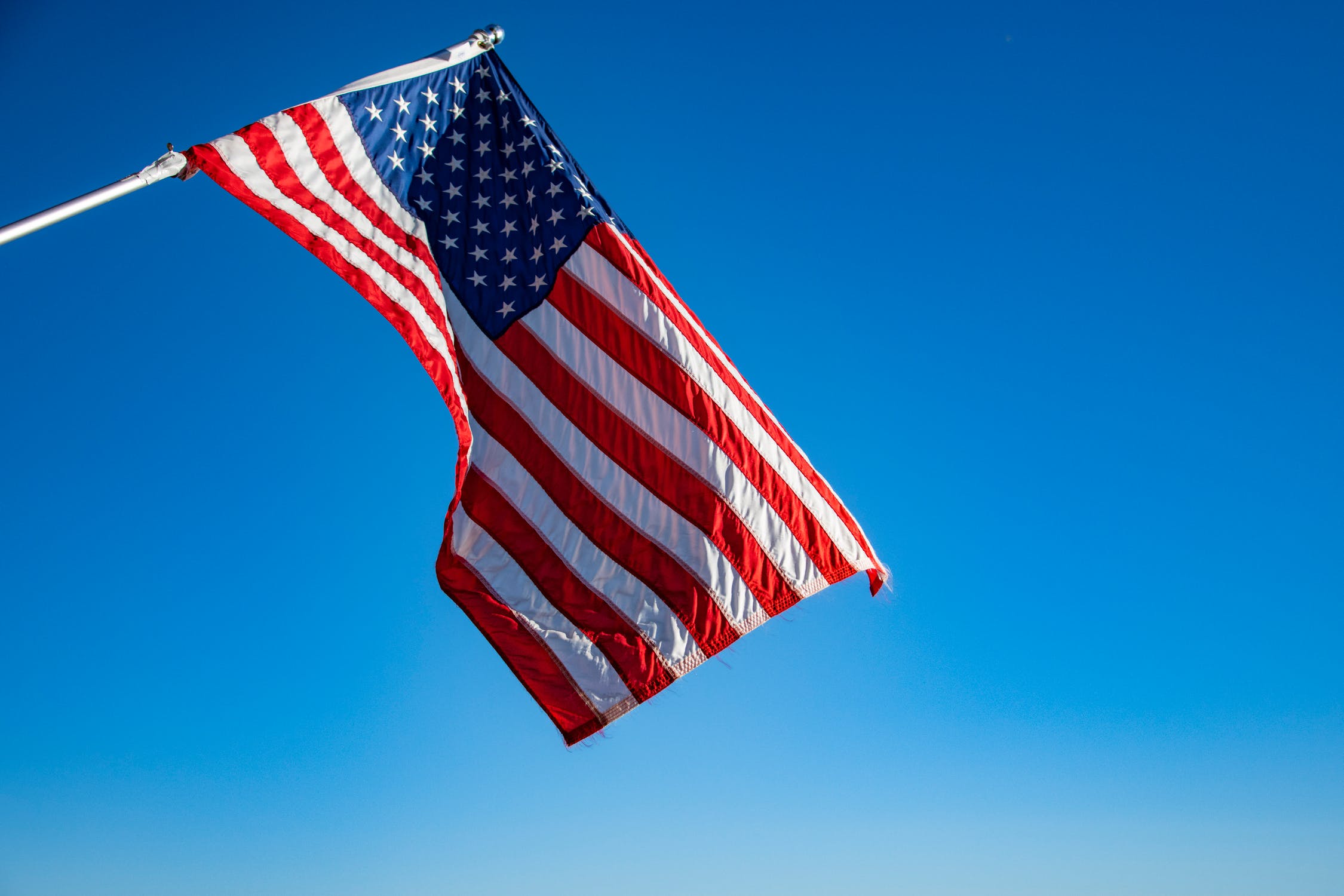 There was a time, about 60-70 years ago, when the typical American worker spent several hundred fewer hours on the job each year compared with worked in major European economies.

But for the last few decades, American workers now spend several hundred hours more on the job each year. This shift was not a self-aware political decision. No prominent US political leader advocated that Americans should work more hours than those in other high-income countries. But it has happened, and the question is what might be done about it. Isabel V. Sawhill and Katherine Guyot  lay out the background and offer some policy ideas in "The Middle Class Time Squeeze" (August 2020, Brookings Institution). 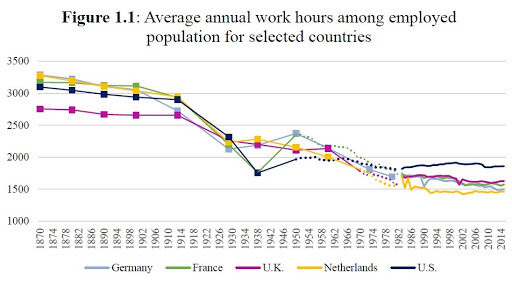 Why has this gap emerged? A number of answer have been proposed, not of them fully satisfactory. Maybe Europeans just have a greater preference for leisure than Americans? If so, this preference emerged rather suddenly in the 1960s. Maybe it's higher taxes on labor  in Europe, or more generous government support for those not working part of a given year?

Sawhill and Guyot point out to research showing that that "legally mandated vacations" account for about 80% of the gap in annual hours worked between the US and European comparison countries. "The European Union’s Working Time Directive guarantees 20 paid vacation days per year, and some member states go beyond this requirement, in addition to providing paid holidays." 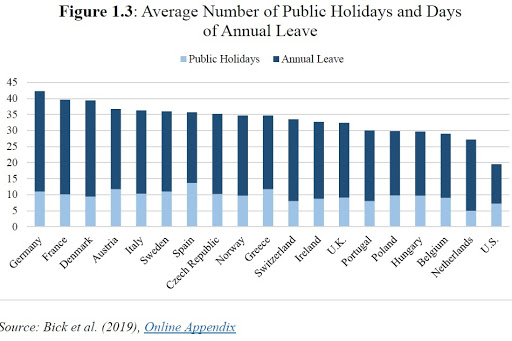 In addition, the average workweek is shorter in European countries, and especially in western Europe and Scandinavia, part-time work is more common and standard. 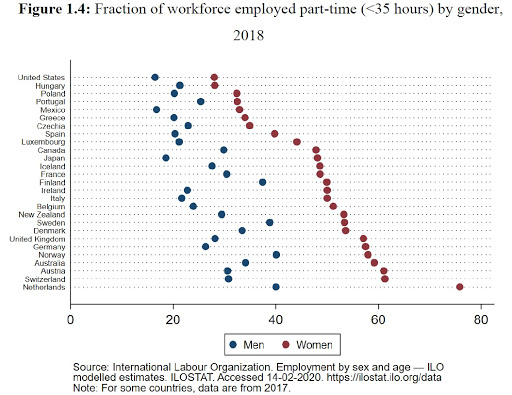 An additional factor is while annual hours worked per years is discussed here on a per worker basis, the entry of women into the (paid) labor force in the last half-century or so means that more two-parent households and two earners, and more single-parent households have someone working full-time. For the household, these shifts make time feel tighter, too.

An underlying concern here is that when it comes to hours worked per week or per year, individuals do not make fully free choices, but instead face options shaped by laws and customs.  I can't "choose" additional paid vacation. In most jobs, a US worker can try to negotiate over fewer weekly hours or part-time status, but it's likely to be difficult and career-limiting to do so. Sawhill and Guyot write: "[I]t is unlikely that extensive worktime reductions will come about solely as a result of individual decision-making. Collective changes are needed if as a society we want to work a little less."

What sort of policies are might achieve this goal? Here are some of their suggestions.
1) "One clear approach to reducing overwork for the middle class is to simply extend current overtime protections to more middle-income workers. Current federal regulations exempt employees who meet certain duties tests and earn more than $35,648 per year; the threshold was raised from $23,660 at the beginning of 2020. While the 2020 increase extended overtime protection to an estimated 1.3 million workers, it falls short of restoring nearly half a century of decline. If the 1975 threshold had been adjusted for inflation, it would now be over $50,000. Additionally, better enforcement is needed to ensure that nonexempt workers are compensated for their time as required by current law."
2) "[I]t may be time to consider a shorter standard workweek by reducing the federal standard from 40 hours per week to 35. ... Reducing the federal standard is not a mandate; it would not prevent individuals from working more than 35 hours per week. It would simply nudge employers in that direction by making it more expensive to keep people on the job for over 35 hours a week ..."
3) "[O]ne option would be to require U.S. employers to offer a minimum of four weeks (20 days) per year of Paid Time Off (PTO) to all full-time employees, with a prorated amount for part-time employees. PTO could be used for vacation, short-term illness, family care, or other reasons at workers’ discretion. ...  One limitation of this approach is that employees may not use the additional leave benefits that are available to them, especially if they worry that they will face negative employment consequences. Fewer than half of American workers used all of their PTO days in 2018, leaving a total of 768 million days unused, according to the U.S. Travel Association. ... This problem could be addressed by requiring employers to compensate employees for unused leave, as is already the case in some states, such as Nebraska and Massachusetts. Such a requirement would allow workers to choose between working less and earning more (through a payout for unused time) in addition to incentivizing employers to promote vacation-taking."
4) Design social insurance for mid-life breaks from work? "We may also want to reallocate work over the lifecycle, as proposed by Isabel Sawhill in her book, The Forgotten Americans: An Economic Agenda for A Divided Nation. ... [W]orking-age families are now spending more total time in market work due primarily to the rise of dual earners. Further, work and family responsibilities tend to peak at the same life stage, with the result that adults between the ages of 30 and 44 spend about twice as much time in combined market and nonmarket work (including family care) as those between 70 and 84. In short, the elderly, especially the “young elderly” who are still healthy, are the new leisured class. ... These developments suggest the need to reinvent social insurance for the modern era by freeing up some time in midlife to raise children, enable people to retrain, or make a fresh start with a new business or a new career, instead of saving all of our nonworking years for retirement. For these reasons Sawhill proposes to expand social insurance to cover new benefits for these kinds of midlife career breaks. In exchange, and to help cover the costs, she proposes to raise retirement ages, consistent with people’s longer and healthier lives."

5) Formalize telecommuting arrangements? "One employer practice that would help is to formalize work-from-home arrangements and give employees the right to request to work remotely without facing negative employment consequences. In some contexts, this could be good for employers and employees: a growing body of research indicates that telecommuting can improve job satisfaction and raise productivity, in addition to reducing emissions and spreading work to more remote regions."
Change the standard federal workweek from 40 to 35 hours over time--which in effect means that employers would need to pay overtime rates above 35 hours worked.
Sawhill and Guyot are clear in acknowledging the tradeoff that working fewer hours is also likely to mean lower pay. Thus, they suggest that changes like this could be phased in over time: for example, your annual raise for the next few years might be smaller, but your paid vacation time would be expanding. But more broadly, their point is that the annual and weekly hours worked by those in any country are not written on stone tablets, nor are they the result of a pure market negotiations. Hours worked are shaped by laws and norms. They have changed in the past, and could be changed again.
A version of this article first appeared on Conversable Economist.