Identity Portability When a Firm Has Your Past Data

Identity Portability When a Firm Has Your Past Data

If I want to try a different pizza joint, switching is easy. If I want to use a different social media platform, switching can be much harder. That's one reason why competition works better when buying pizza. How about if we required that social media companies make it straightforward to port our data and our digital identity to other providers? Joshua Gans discusses this idea in "Enhancing Competition with Data and Identity Portability" (Hamilton Project at the Brookings Institution, Policy Proposal 2018-10, June 2018).

As background, here are a couple of figure. Here are some examples of markets that are pretty highly concentrated, and where the data and identity that you have built up with your existing provider might in some ways be a hindrance if thinking about shifting to a different provider. 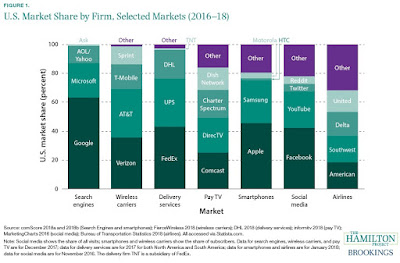 Here's some evidence on social media use in the US. 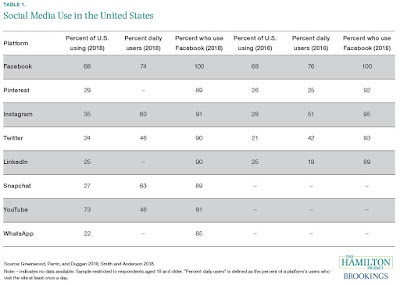 So what would this proposal do? Gans notes that a number of platforms already have data portability, in the sense that, if you wish, you can download your data from the archives of Google, Twitter, Facebook, or LinkedIn, and transfer that data to another platform. Call this "standard portability." Gans writes:

"However, when switching costs are driven by network effects, standard data portability does nothing to address those concerns. For example, while a user can switch from one digital platform and take all of their posts and content to a new platform, they cannot port the posts that others have shared with them. In other words, they must remain on the incumbent platform to view those messages. This problem arises not just for past messages, but also for future messages. Users who switch platforms would not have the ability to receive new content from their previous network on the new platform. ...

"The solution I propose is that individual users have a right to their identity and its verification if they change digital platforms. What this would mean is that if users on a particular platform give permission to send messages to Person A, then, should Person A change digital platforms, she can opt to have all messages forwarded to her on the new network. Because users were already sending messages to a person with a verified identity, that identity should persist along with the permissions that establish from whom to receive messages and to whom to send them."

It's admittedly not clear how much difference data and identity portability would make to competition in industries where you are attached to the firm in part because it has your past data. Also, there would be complexities to work out technical, differences across types of platforms and uses, potential privacy issues when certain social media use is anonymous, and so on. Gans offers some discussion of these issues. But the basic goal is to reduce the chance that people are locked in to their current providers because you've been with it so long that they are home for a lot of your past data and links. Instead, platform firms would need to compete on current service and new features, and new entrants would find it easier to get some footing.

Gans makes the interesting point that social media platforms, entertainment platforms, and other digical companies are all  competing for your attention. Thus, if many people continue to use Facebook--but use it less often and for fewer purposes--Facebook as a business proposition would be diminished. He writes:

"For instance, Facebook and other networks play roles in referring traffic to outside publishers and other media. If Facebook were to lose user attention, its role as a referrer would likely diminish as well. For instance, in 2017 Google accounted for 44 percent of referral traffic to publishers (up from 34 percent in 2016), while Facebook accounted for 26 percent (down from 40 percent in 2016) (Willens 2017). This suggests that the balance of social media market power might be more fluid than usage shares would indicate. More broadly, one could argue that social media is not the relevant market, but rather all these firms are competing for attention with other media, and as such, Netflix, broadcast TV, and any Internet sites are all competing for viewing time with these social media platforms."

The comments by Gans reminded me of an essay written almost 50 years ago back in 1971 by Herbert Simon about the "economics of information overload." Simon wrote:

Gans also notes that while the specific proposal discussed here is about social media, the ideas of data and identity portability have many other applications. I mentioned above the idea of data portability of bank and credit card records. One can also imagine identity portability applying to data on health monitoring, or across all the ratings systems that different companies use for people to rate buyers to sellers, or across all the review systems that companies use to offer recommendations to potential future buyers.