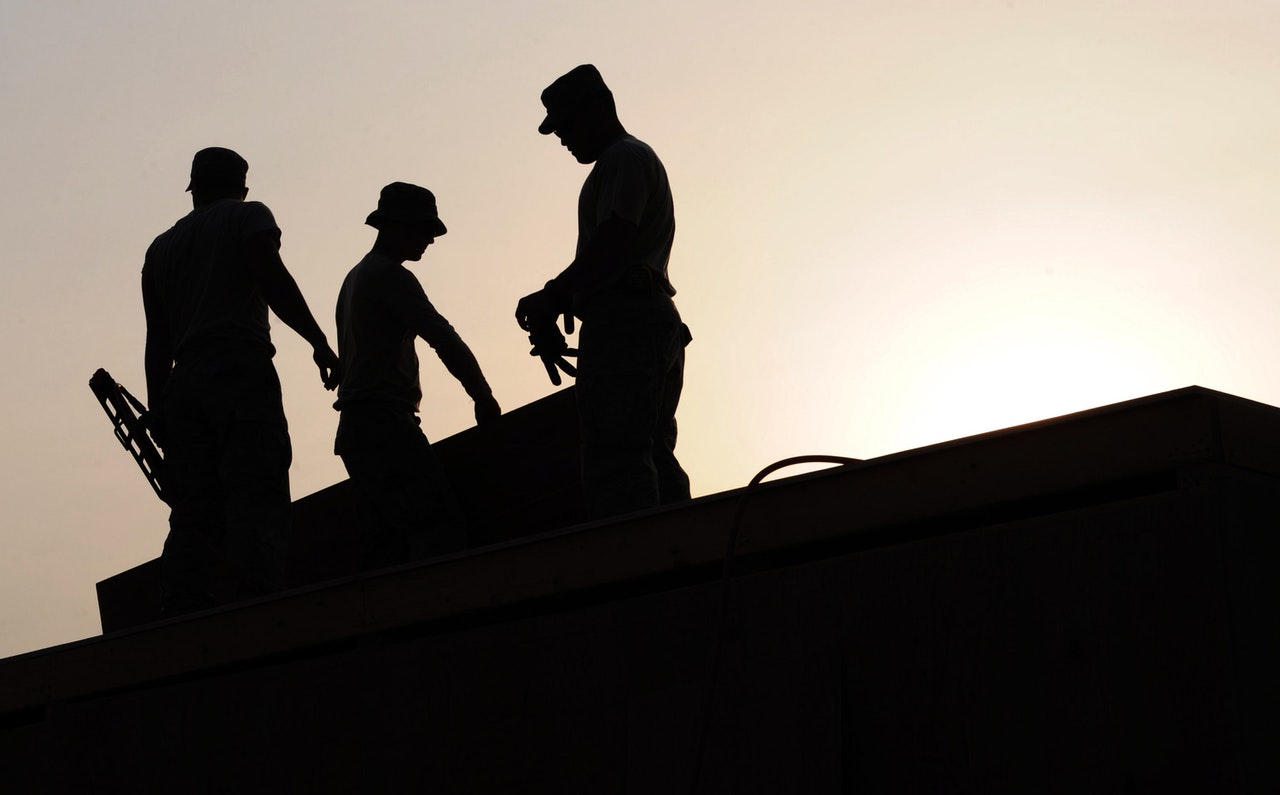 For many people, the higher level of price inflation–and the reality that wages are not keeping up–is probably the most pressing economic concern of the day.

But it’s worth paying some attention to the unusual situation in labor markets, where the number of job openings is higher than the number of unemployed people. Arthak Adhikari and Tamara Mickle of the US Bureau of Labor Statistics lay out some basic facts in “What is the unemployed people per job openings ratio? A 21-year case study into unemployment trends” (Beyond the Numbers, June 2022). 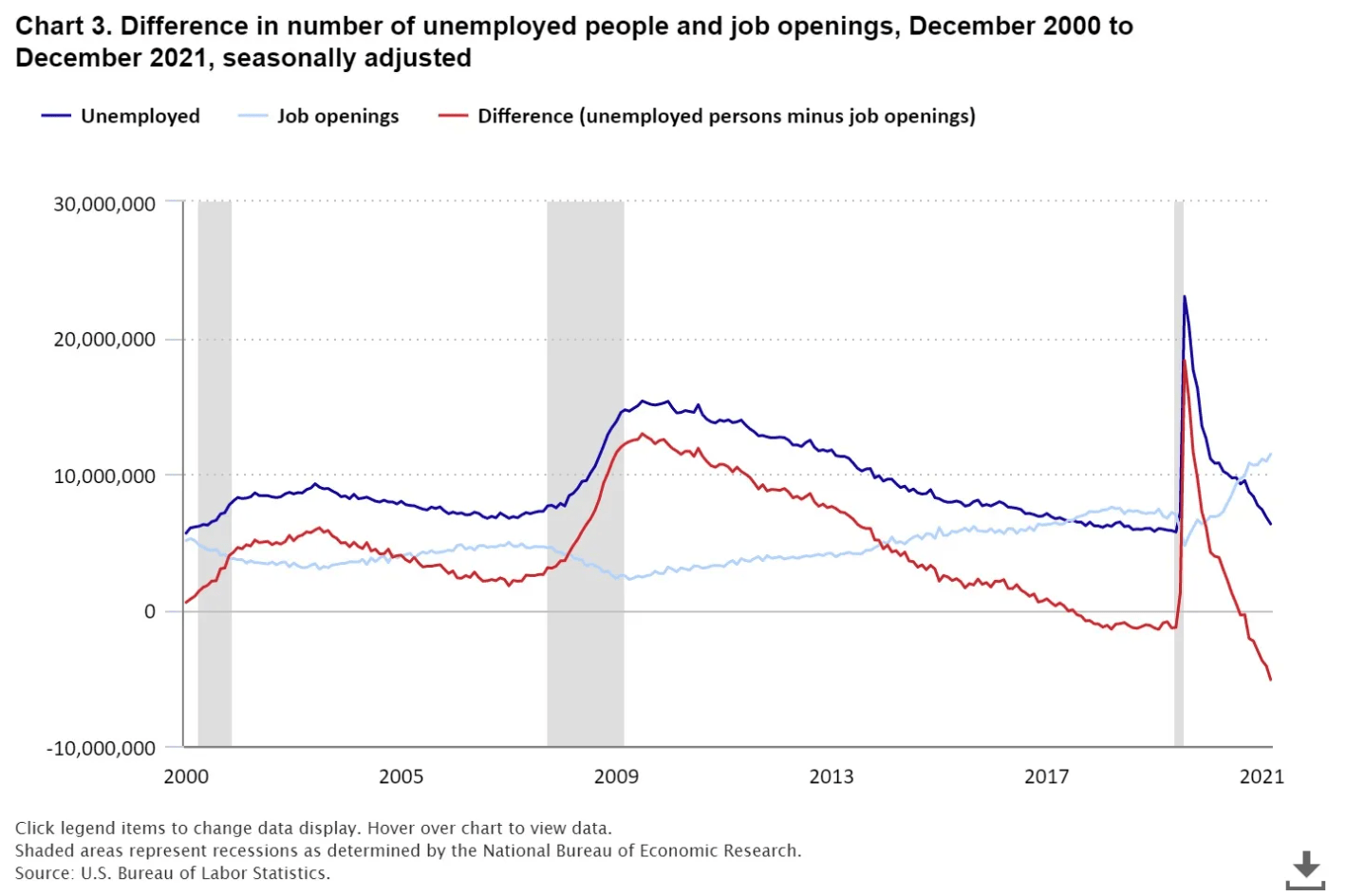 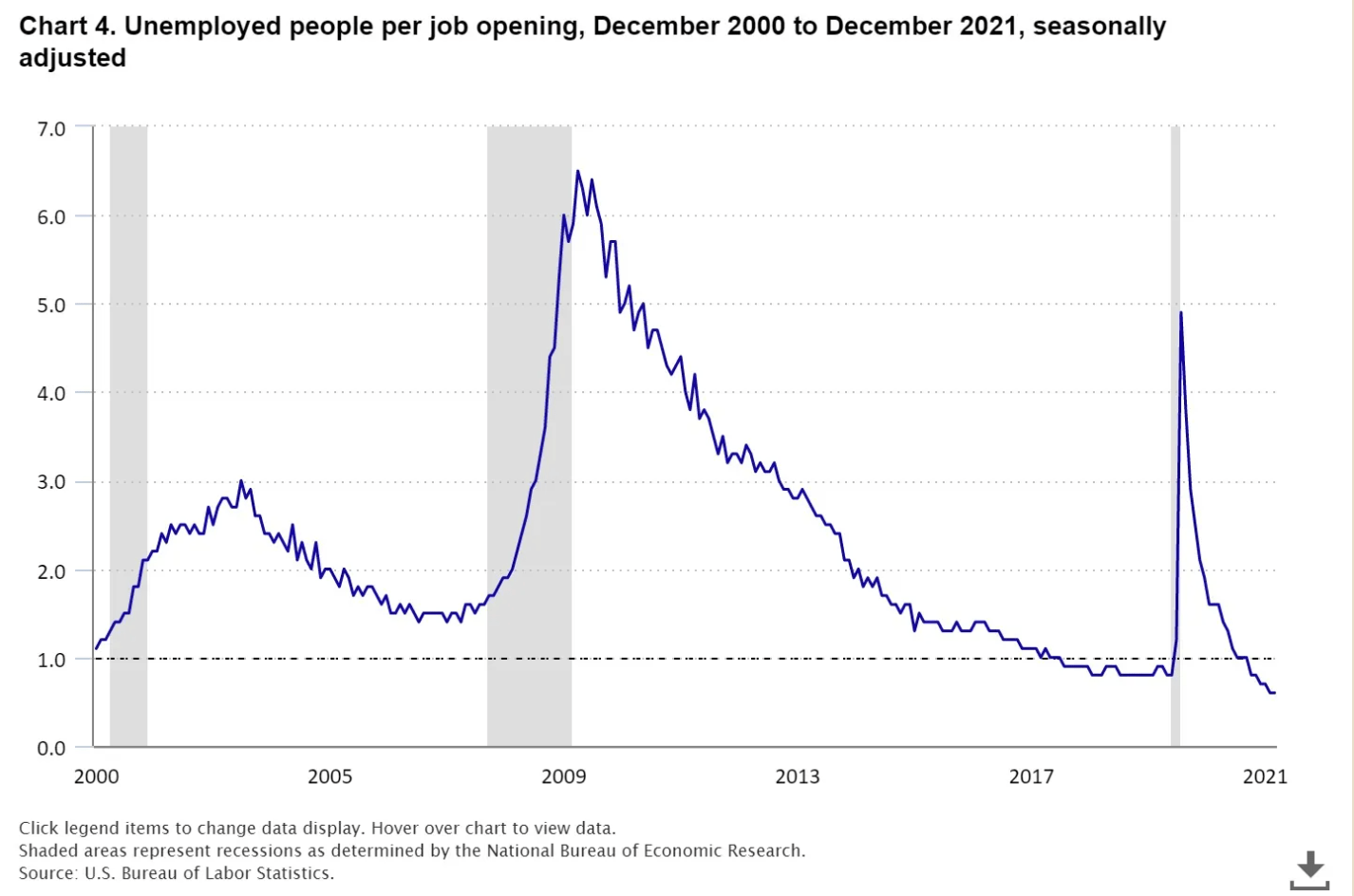 What’s striking to me is that this pattern of more job openings than unemployed is not just a post-pandemic phenomenon. It was part of a trend going back to the period after the Great Recession and up through early 2020, as well. Notice in the first figure that the number of job openings is steadily on the rise in the time before the pandemic–and recently as well–but the number of unemployed workers is falling. With all these job openings, why isn’t the unemployment rate even lower than 3.6%? Why do so many people seem to be finding it hard to get a job? Here are some of the (potentially overlapping) theories:

1) A mismatch theory would suggest that there are lots of jobs, but unemployed workers may not be qualified. If many of the jobs are for computer programmers, for example, then those without the desired skills aren’t going to get hired. International evidence from the IMF suggests that this is only a modest contributor to these patterns.

2) The Great Resignation theory suggests that there may be lots of jobs, but many of them don’t offer much in the way of pay, benefits, or career path. Thus, people who had those jobs in the past, or people who on the margin between working or not working, now have a greater tendency to opt out.

4) The transaction costs theory suggests that something about the nature of job search has changed. The old days of showing up at a store and filling out a job application in response to a help-wanted sign are, in many places, long-gone. Instead, firms post even entry-level jobs at their websites, and applying for a job can mean filling out pages of forms, uploading a resume, even an automated video interview. Firms have lots of reasons to have shifted their hiring in this way. But my sense is that the barriers of applying for a job in this way are real, perhaps especially for low-skilled workers. Workers must often plan to go through this application process with a number of potential employers, knowing that dozens or hundreds of other online applicants are doing the same thing. It may be that what a firm sees as a “job opening” is not the same as it used to be.

5) The US workforce is aging. The front edge of the post-World War II “Baby Boom” generation was born in 1945. That group hit age 65, and thus started retiring in force, around 2010. My sense is that a substantial number of older workers might be tempted to work, by the right mix of wages and job conditions, but don’t necessarily feel that they need to be pounding the internet (what we used to call “pounding the pavement”) looking for a job.

The underlying pattern here, at least up to the time before the pandemic recession, was a pair of countervailing trends in the labor force participation rate and the employment/population ratio. The falling labor force participation rate meant that a smaller share of adults were either employed or without a job but unemployed and looking for one. The rising employment/population ratio meant that out of the adult population, a larger share held jobs than before. Even before the pandemic recession, these patterns meant that firms were often seeking to hire people who didn’t count as officially unemployed, because they were out of the labor force and not actually looking for a job. This pattern of more job openings than unemployed existed before the pandemic. Except for periods of recession, it may be a new normal.