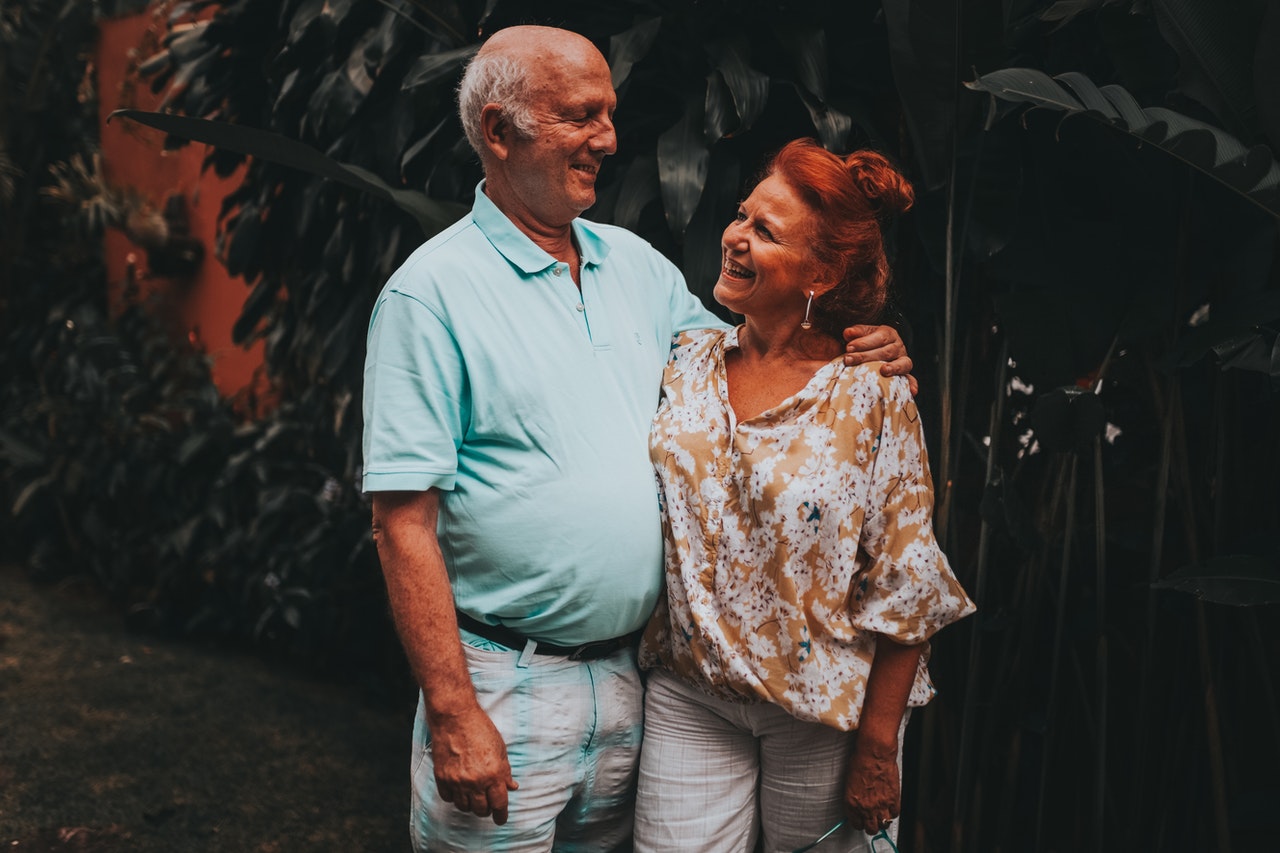 It’s not a big shock that those who get a PhD tend to have parents who also had a higher level of education.

If your parents have some knowledge about how to navigate the tangled forests of academia, along with the financial resources to help you along, you are more likely to get that advanced degree. But what is surprising, at least to me, is that this connection between parental education and getting a PhD is stronger for economics than for most other fields.

One possible concern here is that many PhD programs at American universities have a large share of international students. Perhaps the patterns would be different if we focused only on US-born PhDs? Not really. Here are the same figures, this time with only US-born PhDs. As you can see, US-born economics PhDs are least likely to have parents without a BA degree and most likely to have parents with an advanced degree. It’s true that economics PhDs don’t look different in the middle graph of those with only a BA degree, but it’s also true that the differences in that middle graph across different PhD fields are relatively small. 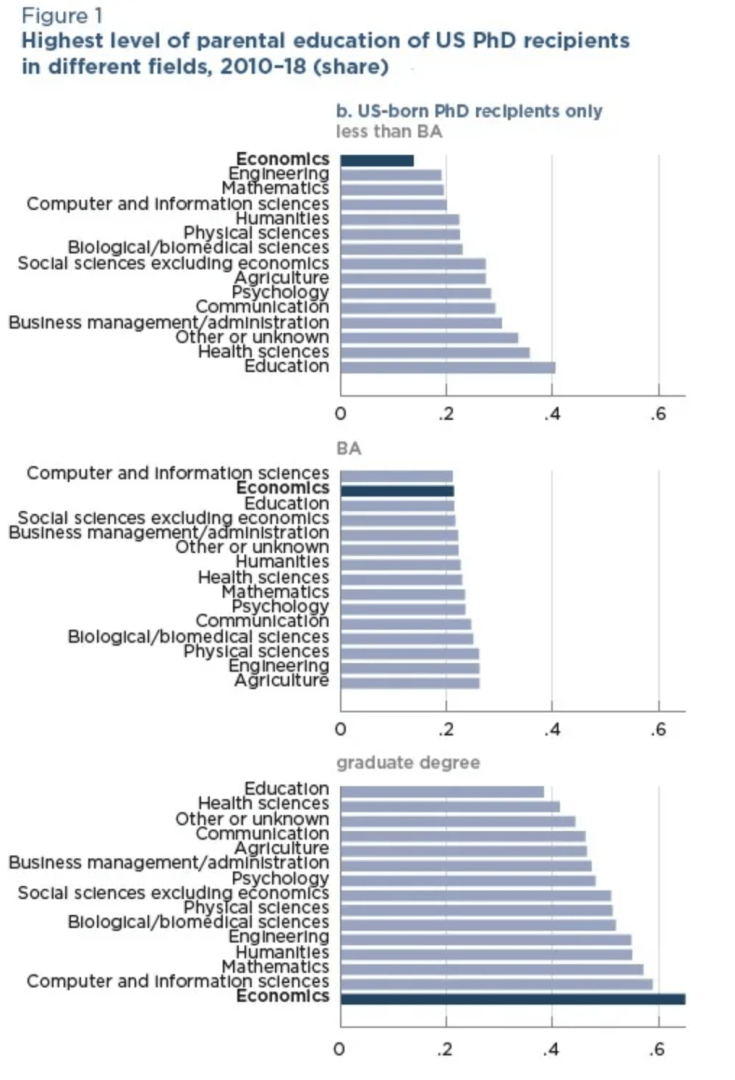 This distinctive pattern of economics PhDs seems to have emerged in the 1980s and 1990s, and remained that way since then. This graph shows the connection between whether a parent has an advanced degree and an individual’s likelihood of getting a PhD. The overall pattern here is interesting: across many fields, those who get PhDs are more likely to have parents with advanced degrees. For many other fields, this pattern has flattened out in the last couple of decades: in economics, not so much. There is a broader social issue here, which is that higher education has become a way for the well-off to give their children a socioeconomic boost as well–an intergenerational social mechanism that is probably much more important for most families than the size of any purely financial inheritance. But my focus here is on the pattern for economics PhDs, where this overall pattern is strongest. 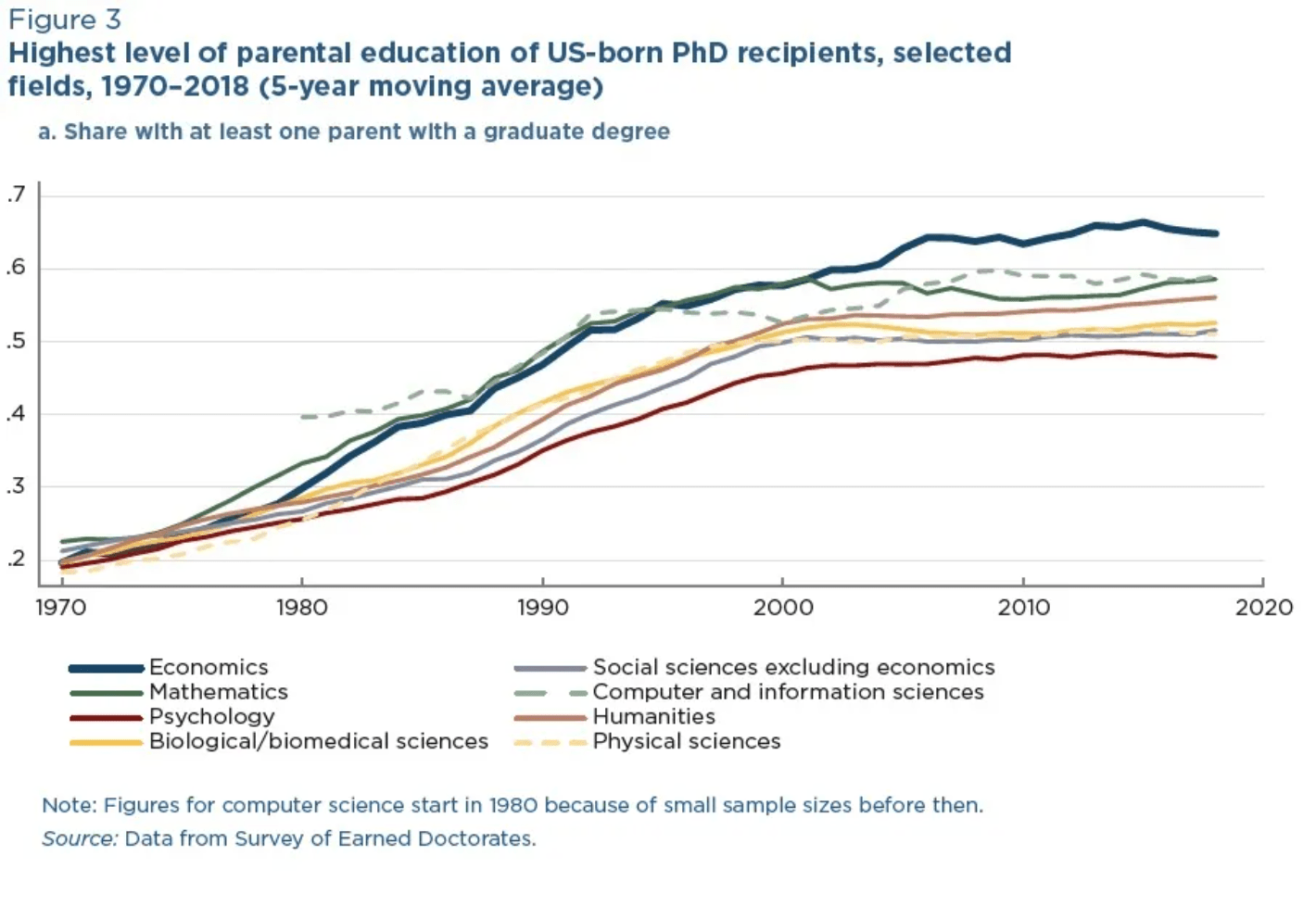 Why does economics stand out from other subject areas in these comparisons? The answer isn’t obvious. One possibility is that the gap between a BA degree and PhD study is large in most fields, but maybe largest in economics. In most economics programs, it’s possible to get high grades in all your required classes and your senior project, but if you have not taken an additional heavy dose of math and statistics beyond those requirements, or if your undergraduate department hasn’t prepared you for graduate school expectations in other ways, you are less likely to be admitted and to succeed in an economics PhD program. Perhaps parents with graduate degrees are more aware of these issues, and so their children who go on to enter an economics PhD program are better prepared.

Another theory is that there is something in the way economics is commonly presented or taught at the undergraduate level which makes it less appealing to students whose parents do not have graduate degrees. 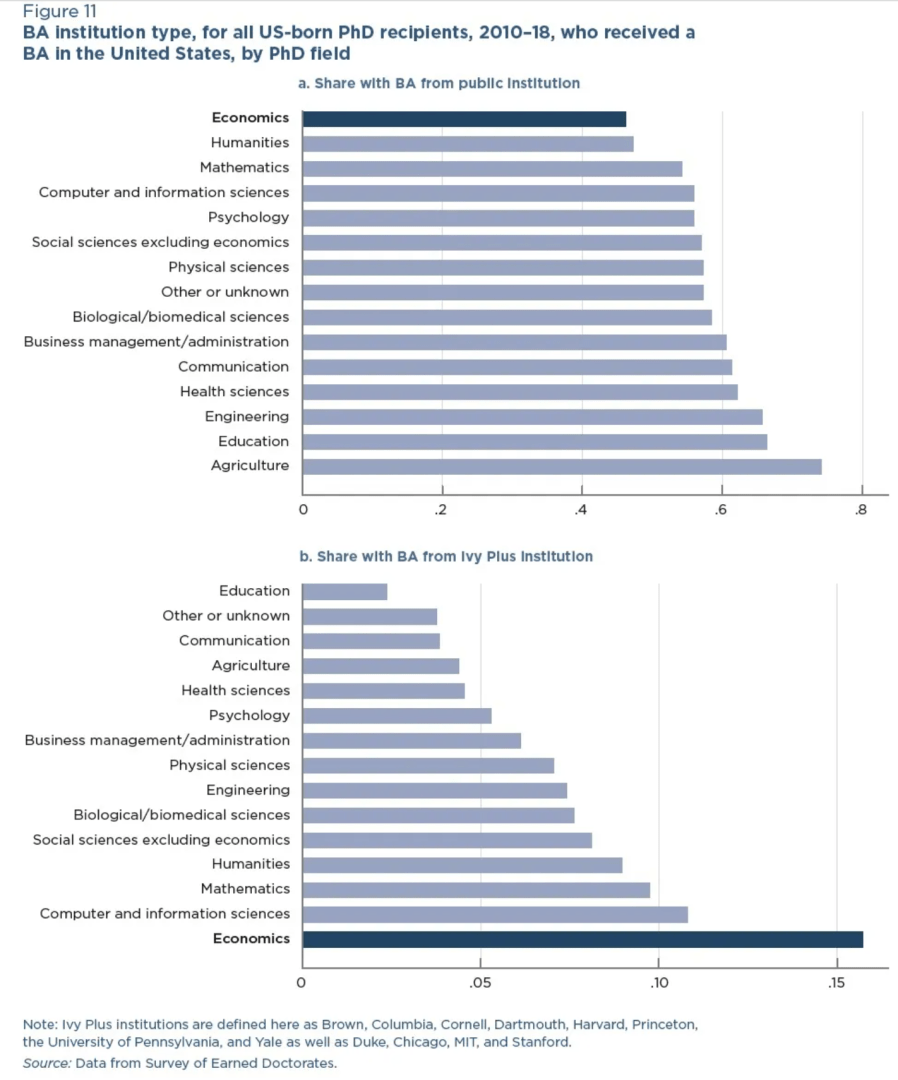 I won’t try to draw big-picture conclusions here about “what it all means about economics.” But the picture that emerges is that PhD programs in economics seem notably less open to the range of parental backgrounds than other fields. Moreover, that lack of openness is being enforced and replicated by admissions committees in economics PhD programs.