Some 12-Grader Education Inequalities by Race

Some 12-Grader Education Inequalities by Race 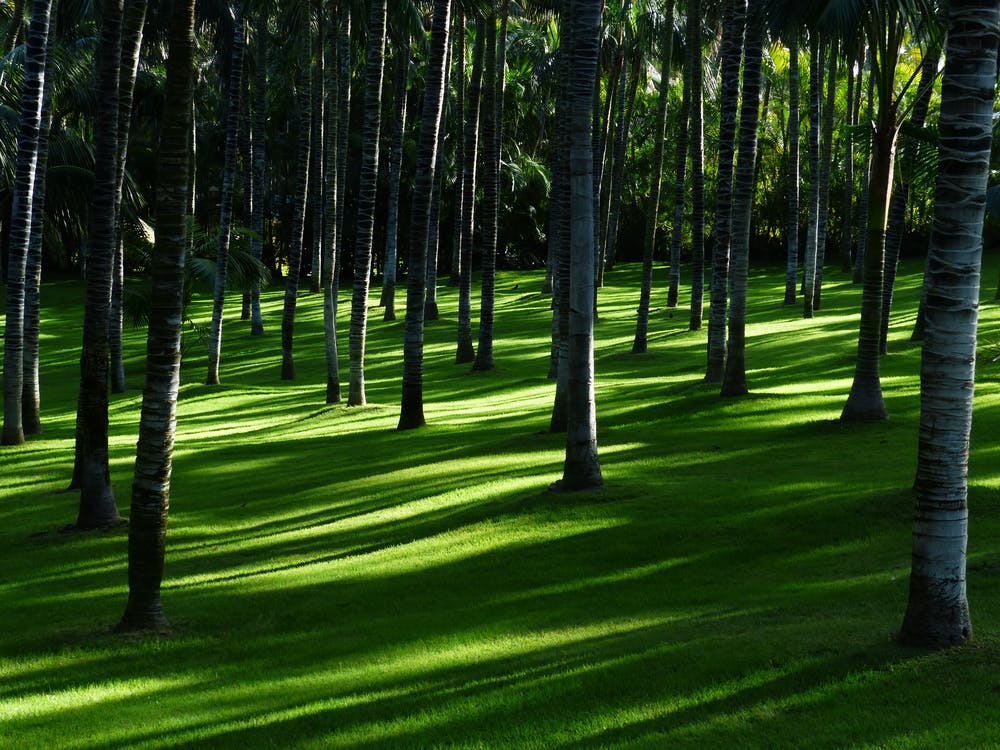 One of the most concerning US racial inequalities is the one embodied in K-12 academic preparation, which often sets the stage for additional education, jobs, income levels, the neighborhood where you live, and more.

The National Assessment of Educational Progress is often referred to as the "Nation's Report Card." It's a nationally representative test. The results for 12th graders who graduated in 2019 are now available. 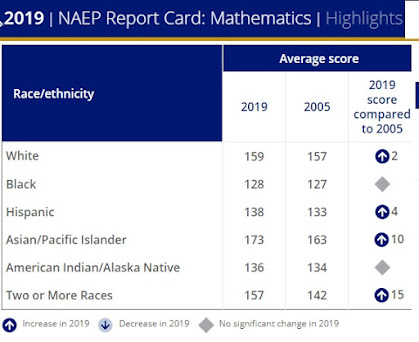 As the chart shows, average math scores are up for some groups. But the gap between white and black scores is just a bit larger in 2019 than in 2005.  Remember, an entire cohort of K-12 student who were just entering school about 2005 have now graduated. The gaps that were apparent in 2005 persist. 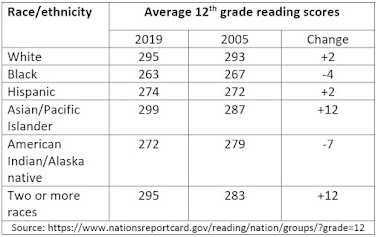 Again, average reading scores are up for some groups. But the gap between white and black scores is just larger in 2019 than in 2005; indeed, a different figure going back to 1992 shows that the white/black gap in scores in 2019 is the largest during this time.

There is of course a considerable body of research that seeks to explore and explain these gaps. A common finding in this research is that there are strong correlations between levels of parental income and education and student achievement.  Here are a couple of examples that crossed my desk.

Kenneth A. Shores, Ha Eun Kim, and Mela Still, "Categorical Inequality in Black and White: Linking Disproportionality across Multiple Educational Outcomes" (American Educational Research Journal, October 2020, 57:5, pp. 2089–2131). From the abstract: "We characterize the extent to which Black-White gaps for multiple educational outcomes are linked across school districts in the United States. Gaps in disciplinary action, grade-level retention, classification into special education and Gifted and Talented, and Advanced Placement course-taking are large in magnitude and correlated. Racial differences in family income and parent education are strikingly consistent predictors of these gaps, and districts with large gaps in one outcome are likely to have large gaps in another. Socioeconomic and segregation variables explain 1.7 to 3.5 times more variance for achievement relative to non-achievement outcomes."

Sean F. Reardon,  Ericka Weathers,  Erin Fahle, Heewon Jang, and Demetra Kalogrides have written "Is Separate Still Unequal? New Evidence on School Segregation and Racial Academic Achievement Gaps" (Stanford Center for Education Policy Analysis, September 2019).  From the abstract: "In this paper we estimate the effects of current-day school segregation on racial achievement gaps. We use 8 years of data from all public school districts in the U.S. We find that racial school segregation is strongly associated with the magnitude of achievement gaps in 3rd grade, and with the rate at which gaps grow from third to eighth grade. The association of racial segregation with achievement gaps is completely accounted for by racial differences in school poverty: racial segregation appears to be harmful because it concentrates minority students in high-poverty schools, which are, on average, less effective than lower-poverty schools. Finally, we conduct exploratory analyses to examine potential mechanisms through which differential enrollment in high-poverty schools leads to inequality. We find that the effects of school poverty do not appear to be explained by differences in the set of measurable teacher or school characteristics available to us."

This article isn't the place to try to solve America's K-12 education issues, which are of long standing. But I'll add a few thoughts.

1) It's not a good thing to have large and persistent gaps in educational performance across groups. It perpetuates previous inequalities. Moreover, a country that does a better job of building its human capital will also be a country with higher levels of growth and wealth. 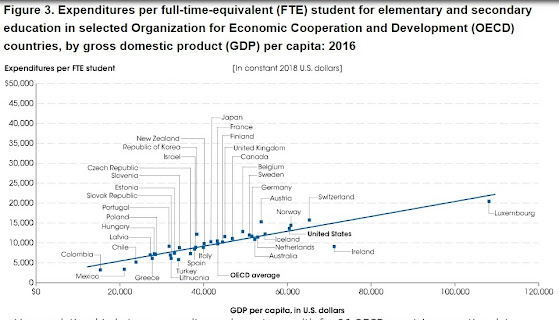 3) There's a line of research which suggests that what students often need is to build up the personal skills and resources that the need to be successful at school. Christopher L. Quarles,  Ceren Budak and Paul Resnick make this argument about community college students in "The shape of educational inequality" (Science Advances,  July 15, 2020,)

4) Many of our social arguments about education these days seem to revolve around  issues like about admissions criteria for selective colleges: Harvard, Yale, Michigan, Texas, Berkeley and others. But the problem of racial inequality in the US education system is not that all the problems are pretty much fixed, except for fairness of admissions at some top universities.  Indeed, the prominence given to these arguments about admissions patterns at selective universities sometimes seems to me like a way of avoiding racial inequalities that have now persisted for multiple generations of families.