Some Snapshots and Thoughts about US Entrepreneurship

Some Snapshots and Thoughts about US Entrepreneurship

A dynamic and healthy economy will always be undergoing a process of churn: new companies and new jobs starting, but also existing companies and jobs ending. Thus, it's been troubling to see articles about "The Decline in US Entrepreneurship" (August 4, 2014), a lower rate of business startups, and a decline in how much new firms are offering in terms of job gains.

The Kauffman Foundation does regular surveys of US entrepreneurship. Robert Fairlie, Sameeksha Desai, and A.J. Herrmann wrote up the 2017 National Report on Early Stage Entrepreneuship (February 2019). The report offers some reasons for modest encouragement, but in the end seems overly optimistic to me.

On the positive side, the survey uses data from the nationally representative Current Population Survey conducted by the Census Bureau to calculate the "rate of new entrepreneurs." Specifically: "The rate of new entrepreneurs captures the percentage of the adult, non-business owner population that starts a business each month. This indicator captures all new business owners, including those who own incorporated or unincorporated businesses, and those who are employers or non-employers." 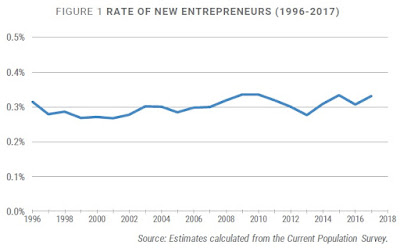 The Census data also lets the authors break down this data in various ways: for example, the rate of new entrepreneurs is about twice as high for immigrants: 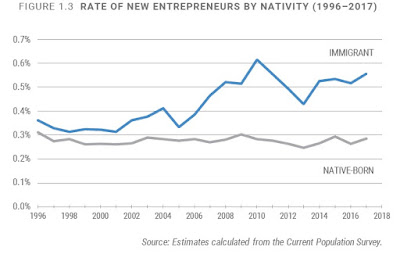 Overall, the Kauffman report is optimistic about early-stage entrepreneurship in 2017. But some of the results of the survey, as well as data from the Business Dynamics Statistics produced by the Census Bureau offer some reason for concern.
For example, when one breaks down the rate of new entrepreneurs in more detail, it turns out that those with less than a high school education have a rising rate of starting firms--unlike any other educational group. 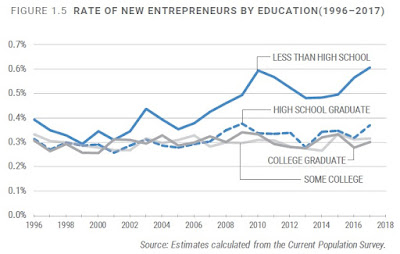 In addition: "Older adults also represent a growing segment of the entrepreneurial population: adults between the ages of 55 and 64 made up 26 percent of new entrepreneurs in 2017, a significant increase over the 19.1 percent they represented in 2007." Conversely, these figures suggest that a smaller share of new companies are being started by highly educated workers in their peak earning years.
At least to me, this pattern suggests the possibility that a larger share of new companies are aimed at providing income and independence for their owners, but may be less likely to grow and generate substantial numbers of jobs. Indeed, the Kauffman report also includes this figure, showing that the jobs per 1,000 people from early startups has been declining over time. 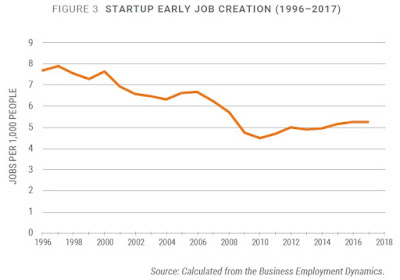 The Business Dynamics Statistics is constructed from what is called the Longitudinal Business Database. In turn, this data uses Census data and links the records on individual companies over time. To keep the records of individual companies confidential, the data can only be accessed by qualified researchers through a network of Census Bureau Research Data Centers. However, the website does have a nice data tool for making quick-and-easy graphs of some overall patterns in this data, as well as sector-level and state-level patterns.
Here's an example of a figure showing "Establishment birth rates" (black line) and "Establishment exit rate" (blue line). For example, back in the 1980s it was fairly common for the number of new establishments to be about 15 percent of the total number of firms; now, it's about 10%. Both rates of entry and exit have been declining over time, suggesting that new firms are having a harder time getting started and established firms are having an easier time staying in place.

In thinking about US entrepreneurship, the standard concern is that the churning of job market seems to be declining over time. The orange line shows that job creation by new establishments has been declining, too, similar to the finding from the Kauffman data.
A dynamic churning economy is a mixture of benefits for firms and their workers on the rise  and costs for firms and their workers who are on the downside. But from an overall perspective, it also represents a shift in resources away from firms producing goods and services that not enough people want to buy, or goods and service that aren't being produced at a competitive levels of price and quality. Instead, those resources of workers and capital investment are moving to firms producing the goods and services with the desired mix of price and quality that people do want to purchase. I have argued from time to time that the government could play a larger role in facilitating, or at least not blocking, this process of dynamic movement--especially by assisting workers in transition. But overall, this dynamic process of economic reallocation has been one of the strengths of the US economy, and it is troublesome to see signs that it may be diminishing.
A version of this article first appeared on Conversable Economist.