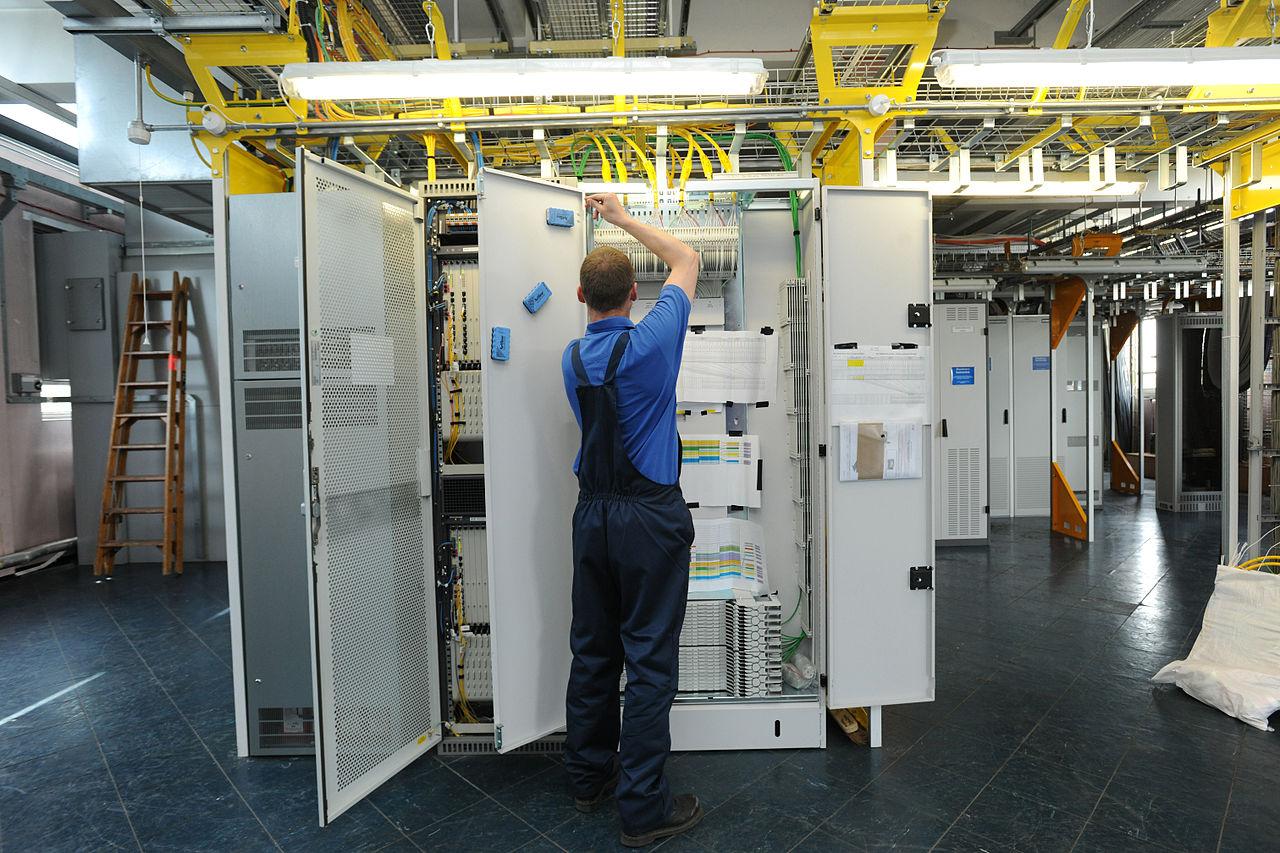 Almost all of these switchboard operators were female. To put it another way, about one out of every 13 working women in 1950 were telephone operators.  But by 1984, national employment as an operator in the telecommunications industry was down to 40,000, and now it's less than 2,000 (according to the Bureau of Labor Statistics).

David A. Price sketches the  history of this rise and fall in "Goodbye, Operator," appearing in Econ Focus (Federal Reserve Bank of Richmond, Fourth Quarter 2019, pp. 18-20). The story provokes some thoughts about the interaction of workers with new and evolving technologies.

For more than a half-century from the late 19th century up to 1950, technology was creating jobs as telephone operators. From the phone company point of view, customers needed personal assistance and support if they were to incorporate this new technology into their lives. The workers with what we would now call the "soft skills" to provide this interface between technology and customers were reasonably well-rewarded. Price writes:

In the early decades of the industry, telephone companies regarded their business less as a utility and more as a personal service. The telephone operator was central to this idea, acting as an early version of an intelligent assistant with voice recognition capabilities. She got to know her 50 to 100 assigned customers by name and knew their needs. If a party didn't answer, she would try to find him or her around town. If that didn't succeed, she took a message and called the party again later to pass the message along. She made wake-up calls and gave the time, weather, and sports scores. During crimes in progress or medical emergencies, a subscriber needed only to pick up the handset and the operator would summon the police or doctors. ...

While operators were not highly paid, the need to attract and retain capable women from the middle classes led telephone companies to be benevolent employers by the standards of the day — and in some respects, of any day. Around the turn of the century, the companies catered to their operators with libraries, athletic clubs, free lunches, and disability plans. Operators took their breaks in tastefully appointed, parlor-like break rooms, some with armchairs, couches, magazines, and newspapers. At some exchanges, the companies provided the operators with a community garden in which they could grow flowers or vegetables. In large cities, company-owned dormitories were offered to night-shift operators.

Looking back, the slow diffusion of automatic telephone switching technology seems a little puzzling. One reason is that digital technology differs in some fundamental ways from the earlier methods of automation. It's a standard story that the switchboard operators were replaced by automation. But why weren't they replaced by automation much earlier? Part of the answer seems to be that the automated telephone-switching systems in the first half of the 20th century did not actually display economies of scale. Price writes:

With the electromechanical systems of the day, each additional customer was more, not less, expensive. Economies of scale weren't in the picture. To oversimplify somewhat, a network with eight customers needed eight times eight, or 64, interconnections; a network with nine needed 81. "You were actually getting increasing unit costs as the scope of the network increased," says Mueller. "You didn't get entirely out of the telephone scaling problem until digital switching in the 1960s."

This pattern of technology led to a situation where small-scale independent phone companies were more likely to use automated switching in the early part of the 20th century, while the giant Bell company continued to rely heavily on combinations of automatic switching with oversight from human switchboard operators--especially for long-distance calls.

More broadly, diffusion of technology is important in many contexts. Some well-known historical examples of important technologies that diffused slowly, over decades, include tractors and electricity. In the modern economy, a prominent pattern across many industries is that a few leading "superstar" firms are jumping farther ahead in terms of productivity, and their example of how to achieve such productivity gains is apparently not diffusing as quickly to other firms. There's an old economic lesson here, which is that for purposes of economic growth, just inventing a new technology is not enough: instead, many participants in the economy need to find ways to change their behavior in both simple and more fundamental ways to take full advantage of that technology.

Back in 1964, even knowledgeable industry observers thought that the decline in telephone operators from about 1950 to 1960 was a one-time and temporary shift. Elizabeth Faulkner Baker wrote in  her 1964 book, Technology and Women's Work:

In sum, it is possible that the decline in the relative importance of telephone operators may be nearing an end. It seems that in the foreseeable future no machines will be devised that can completely handle person-to-person calls, credit-card calls, emergency calls, information calls, transient calls, messenger calls, marine and mobile calls, civilian defense calls, conference calls, and coin-box long-distance calls. Indeed, although an executive vice-president of the American Telephone and Telegraph Company has said that the number of dial telephones will reach almost 100 percent in the next few years and that there will be an increasing amount of customer dialing of long-distance calls: "Yet we will still need about the same number of operators we need now, perhaps more."

Again the underlying notion was that the job of being a telephone operator would evolve, but not the need for people who could play a role of facilitating use of telecommunications technology easier for customers. When it comes to the specific job of telephone operator, this prediction was clearly off-base. (Although as a college student in the late 1970s and early 1980s, I remember the days when if you really needed to call home, you could just grab a public phone, dial zero for "operator," and be answered by a person, from whom you would recite your home phone number and request a collect call.) But when thinking more broadly about the interaction between workers and technology, the central question remains as to what areas now and in the future will continue to benefit from human support at the interface between new technologies and ultimate users.