The US Labor Market Struggles to Reorient

The US Labor Market Struggles to Reorient 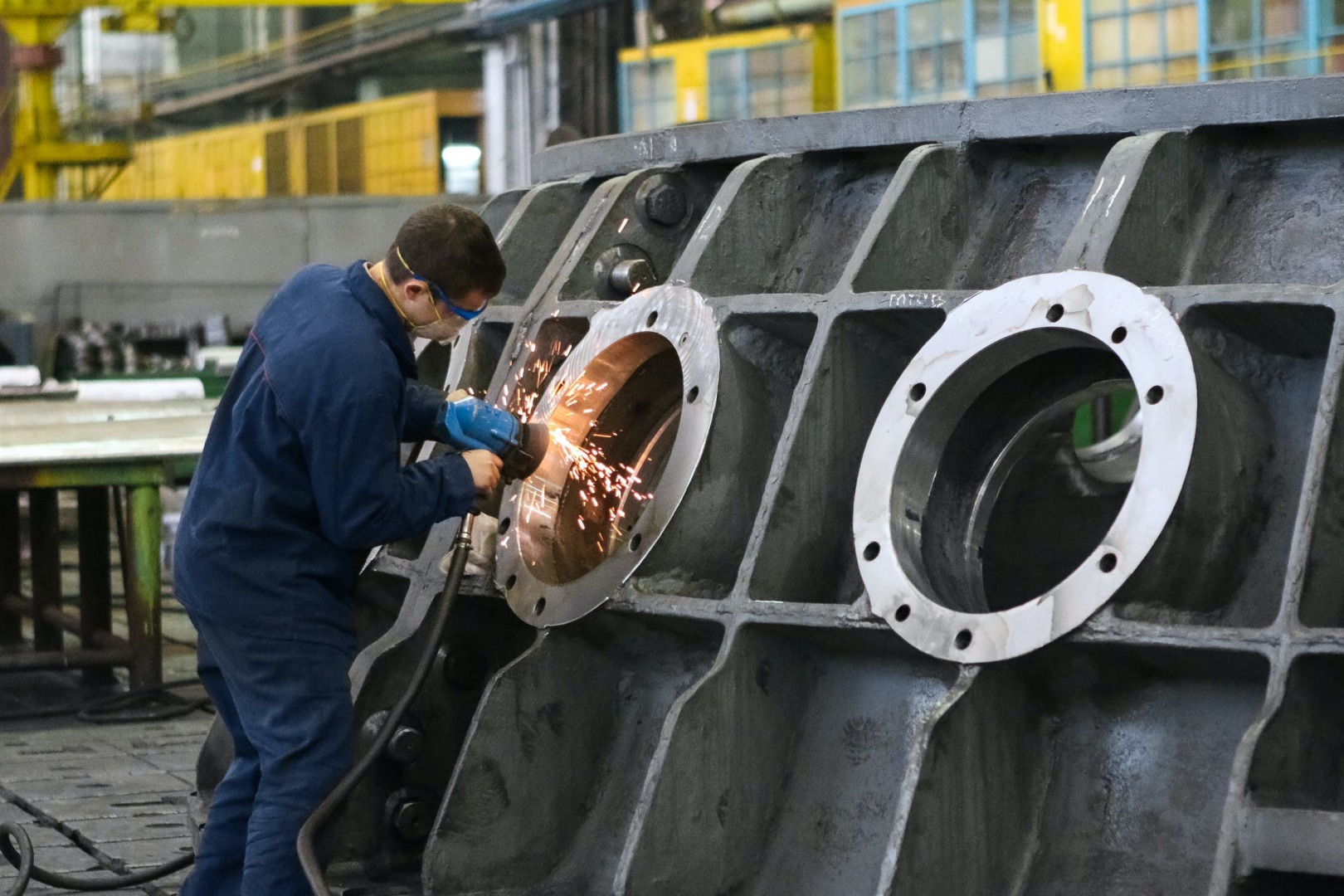 There’s a sort of paradox in the current US labor market.

By a standard measure, there is strong demand by employers to hire more workers. By a standard measure, there is a strong supply of workers willing to take these jobs. But even with at first glance appears to be strong demand and supply for labor, the number of jobs remains well below pre-pandemic levels. There’s a simple explanation for this which I’m sure is part of the truth, and a more complex explanation that I suspect is a bigger part of the answer.

A standard measure of demand for labor is the number of job openings. Here’s what it looks like based on data from the Job Openings and Labor Turnover Survey done by the Bureau of Labor Statistics. 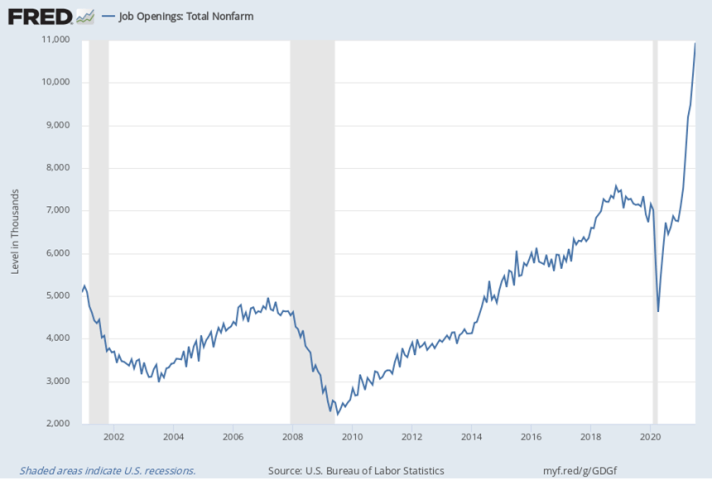 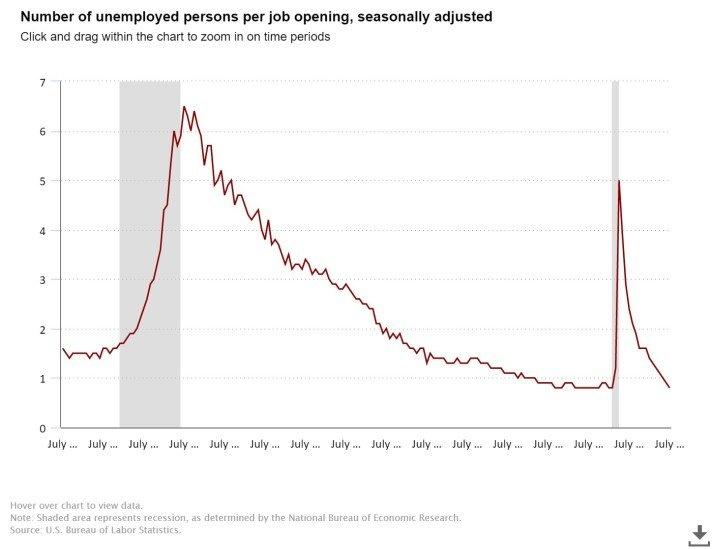 A standard measure of the willingness of workers to supply labor, perhaps counterintuitively, is to look at the rate at which workers are quitting their jobs. The pattern here is that when jobs are scarce, workers tend to hang on to their existing jobs; when jobs seem plentiful, workers are more likely to quit an existing job because they are headed for a different job. As the figure shows, the number of quits has also been soaring. 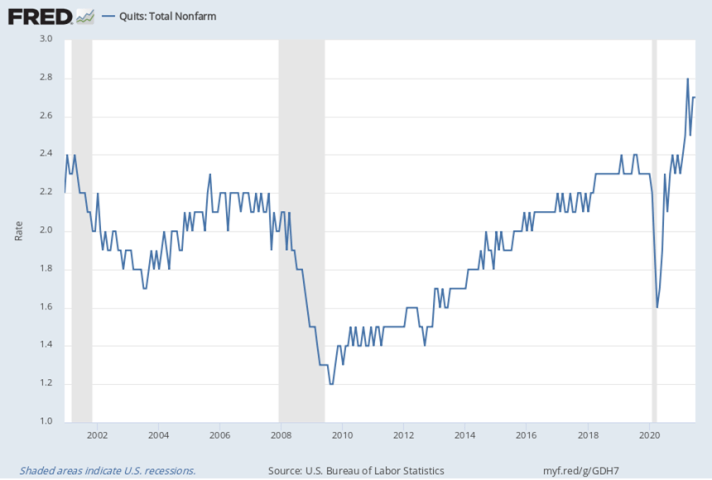 The unemployment rate in August was down to 5.2%, which by conventional standards is pretty good. But to be counted as unemployed, you need to be both out of work and also out looking for a job. This definition has its own logic: after all, it wouldn’t make intuitive sense to say that retired adults or adults who are voluntarily staying home looking after children are “unemployed.” But on the other hand, it raises the possibility that there are people who are out of the labor force, in the sense that they are not looking for work, but who were in the labor force not that long ago and might be willing to be in the labor force again. To see the issue, consider the total number of jobs, which despite what looks like lots of job openings and lots of willingness to take those jobs, has not yet recovered to pre-pandemic levels. 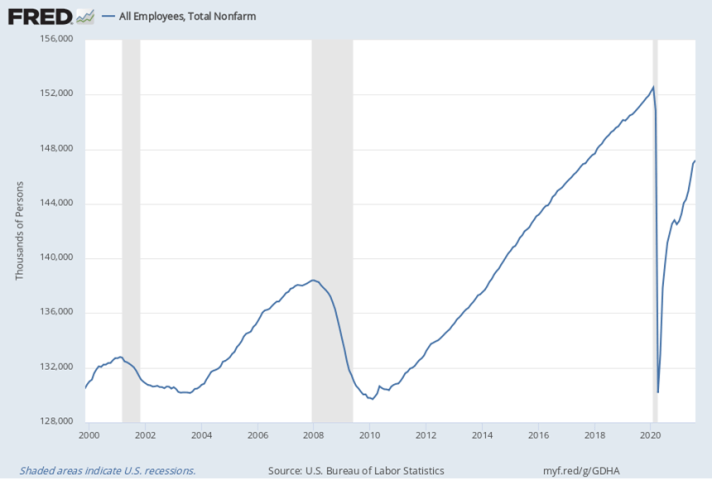 Here’s the most recent Beveridge curve from the JOLTS data. You can see in the pre-pandemic data the generally downward-sloping shape and the loop, as expected. You can also see how the short, sharp two-month pandemic recession just destroyed these patterns. First unemployment shot up with very little change in job openings. Since then, the job openings rate has been climbing to very high levels, and while unemployment has declined, the job openings rate is far higher than at other times when the unemployment rate has been in the range of 5.2%. 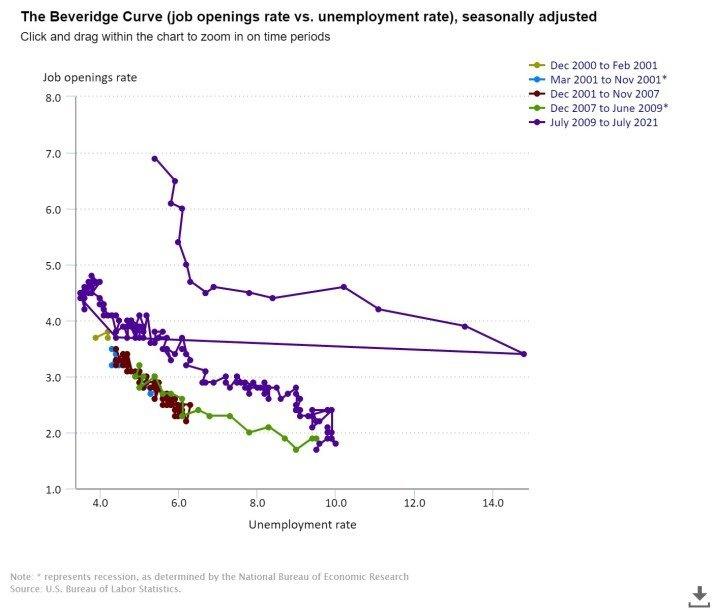 What’s going on here? Some explanations are fairly obvious. One is that the stimulus of the US economy through fiscal and monetary policy has been plenty strong to encourage employers to hire, as one can see by the level of job openings. Another is that lots of workers received unemployment payments that did not just replace their earlier earnings, but were substantially above their earlier earnings. These high payments are just now phasing out, but while they lasted, people’s incentives to find and accept a job that would pay less than their benefits was surely muted.

But along with these factors, I suspect something bigger is happening, too. Every recession involves a reorganization and restructuring of the economy. In a standard recession, this involves a larger-than-usual number of companies going broke, and workers needing to scramble for different jobs. But the restructuring in the pandemic recession–and in continuing restructuring in the pandemic that has continued even though the pandemic recession ended back in April 2020–is of a different sort. There are new dividing lines across the labor force like who can work from home, and what sectors of the economy have been more affected by the pandemic on an ongoing basis, and whether parents can rely on sending their children physically off to school. There are concerns about what working environments are more or less safe.

These issues are playing out in different ways across major employment sectors of the economy: health care, education, retail sales, manufacturing. entertainment, tourism, and others. The strange mixture of conditions in the labor market has occurred as millions of potential workers hold their collective breath, and decide when or if they are willing to jump back into the labor market.

View all
Why High Performing Organizations Don’t Leave Development to Chance
How To Get More Work Coming Your Way As A Property Manager?
11 Reasons Why Annual Reports Are Important
Top Reasons English Is a Global Language, and You Should Learn It in 2022
Why Workplace Injuries Can Happen Even in Offices and How to Reduce the Risks
Roof Maintenance Tips for Businesses: How to Keep Company's Premises Safe
Green Blockchain Plays a Major Part in Fending Off Climate Change
8 Great Ways to Help You Save Energy
How Blockchain Technology is Reinventing The Power Grid
How Blockchain and IoT Collectively Reshape Food Production
4 Ways To Make Sustainability A Part Of Your Everyday Life
Are Mushrooms the Future of Fashion?
Compliance Management is Reforming: Can Revenue Generation be a Possibility?
Bank of England (BoE) Steps in to Calm Down Financial Markets
Markets Crash as Monetary Laughing Gas Fades
More Than 30% of British Adults Are Involved in Entrepreneurship
How To Cancel Timeshare Legally Without Being Scammed
Understanding Personal Financial Management: What You Need To Know
Some Economics of Tobacco Regulation
Some Human Capital Controversies and Meditations
US Unions and Alternative Voices for Labor
Core Inflation Soars, Retail Sales Weaken
Labor Economics: Quiet Quitting, Firing, Mental Health and Productivity
The Slowdown of U.S. Productivity Sector
King Charles III's New Royal Cypher Revealed
76 Theses on American Patriotism
Why Are More People Becoming Right Wing?
A New Law That May Impact Prince Andrew, Princess Beatrice and Prince Harry
King Charles Meets Northern Ireland's Political Leaders During Historic Visit
The Role Machine Learning in Tracing Historical Events
Why You Should Always Put Your Wellbeing Before Other Matters
Brilliant Thinkers Relish Ambiguity, Dull Thinkers Loathe It
Treating Anxiety with VR Technology
The Rise of Telemedicine
You Want Straight Teeth, But Don't Like The Looks Of Braces? Here's The Solution
What Should Hospitals Add To Ensure Maximum Patient Comfort
Why You Should Not Lead If You Aren’t Authentic
How to Transition your Culture as you Scale your Organisation with Darrin Jahnel
Why Is It So Hard To Learn From Our Mistakes?
35 Hidden Countries
How To Know If You're Ready For The Next Step In Your Relationship
Toward a More Spiritual You
How Computer Vision is Revolutionizing the Manufacturing Supply Chain
Leveraging Blockchain and NFT in E-commerce
Looking for a PC that Caters to Your Requirements? Here's a Brief Guide
AR and IoT Applications for Industrial Verticals
Resolve the Data Discrepancy Conundrum in Your Supply Chain Cycles with Blockchain
How to Write Website Content that Drives Traffic

How Computer Vision is Revolutionizing the Manufacturing Supply Chain
Leveraging Blockchain and NFT in E-commerce
Why You Should Not Lead If You Aren’t Authentic
Why High Performing Organizations Don’t Leave Development to Chance
Compliance Management is Reforming: Can Revenue Generation be a Possibility?