The Work and Family Balance for College-Graduate Women: From a Century Ago to the COVID Era

The Work and Family Balance for College-Graduate Women: From a Century Ago to the COVID Era 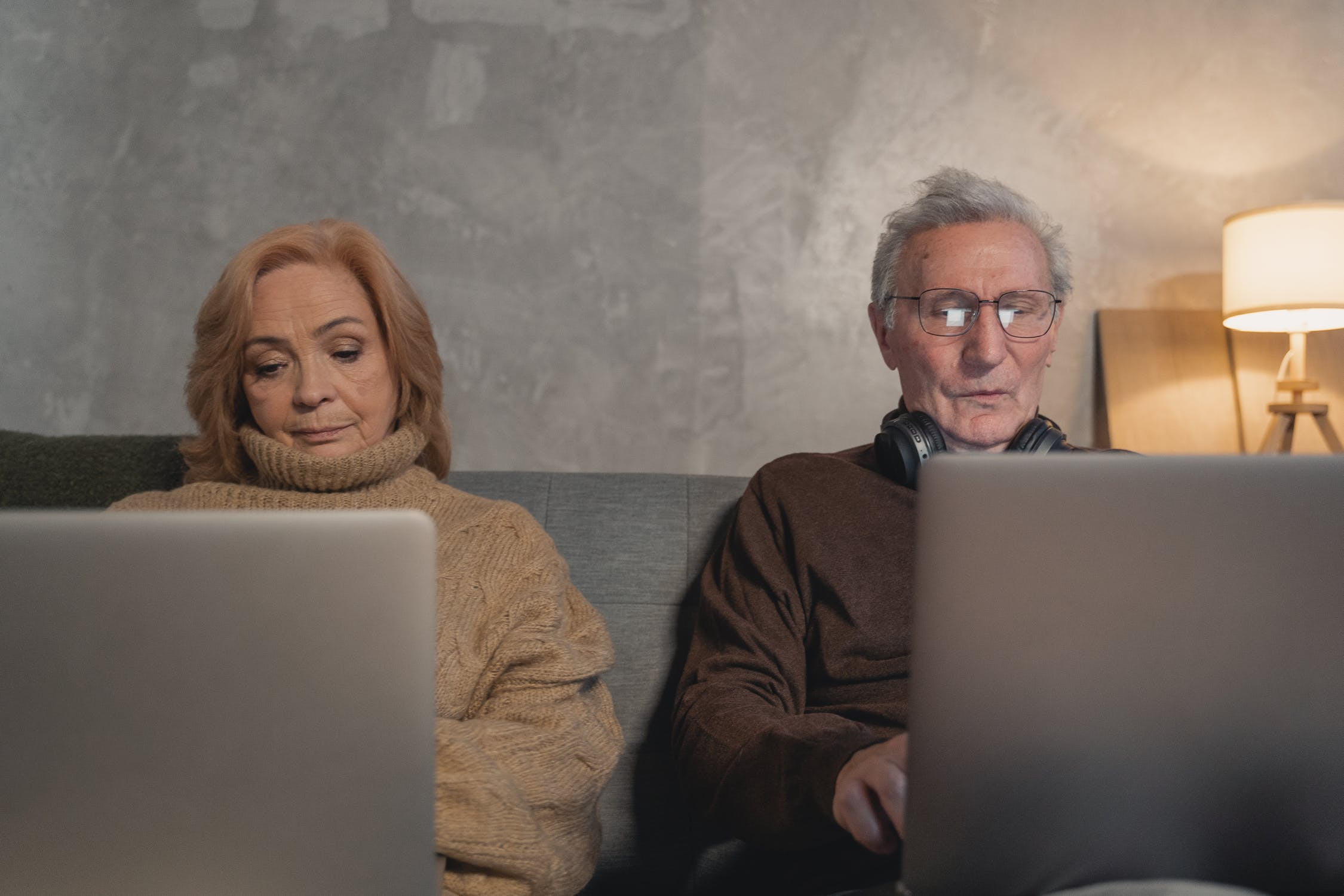 Claudia Goldin delivered the 2020 Martin Feldstein Lecture at the National Bureau of Economic Research on the topic "Journey across a Century of Women" (NBER Reporter, October 2020).

Much of her talk is focused on the changing work/family balance for college graduate women over time.

Five distinct groups of women can be discerned across the past 120 years, according to their changing aspirations and achievements. Group One graduated from college between 1900 and 1919 and achieved “Career or Family.” Group Two was a transition generation between Group One, which had few children, and Group Three, which had many. It achieved “Job then Family.” Group Three, the subject of Betty Friedan’s The Feminine Mystique, graduated from college between 1946 and 1965 and achieved “Family then Job.” Group Four, my generation, graduated between 1966 and 1979 and attempted “Career then Family.” Group Five continues to today and desires “Career and Family.”

College-graduate women in Group One aspired to “Family or Career.” Few managed both. In fact, they split into two groups: 50 percent never bore a child, 32 percent never married. In the portion of Group One that had a family, just a small fraction ever worked for pay. More Group Two college women aspired to careers, but the Great Depression intervened, and this transitional generation got a job then family instead. As America was swept away in a tide of early marriages and a subsequent baby boom, Group Three college women shifted to planning for a family then a job. Just 9 percent of the group never married, and 18 percent never bore a child. Even though their labor force participation rates were low when they were young, they rose greatly — to 73 percent — when they and their children were older. But by the time these women entered the workplace, it was too late for them to develop their jobs into full-fledged careers.

“Career then Family” became a goal for many in Group Four. This group, aided by the Pill, delayed marriage and children to obtain more education and a promising professional trajectory. Consequently, the group had high employment rates when young. But the delay in having children led 27 percent to never have children. Now, for Group Five the goal is career and family, and although they are delaying marriage and childbirth even more than Group Four, just 21 percent don’t have children.

There's much more detail in the talk itself, but I was especially struck by this figure showing the evolution of attitudes about whether pre-school children are likely to suffer if the mother works. 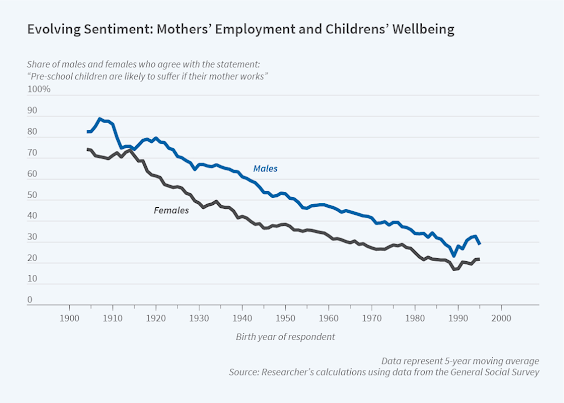 Moving into modern times, Goldin has been making the case for a few years now that fundamental issue affecting the work-life balance for college-graduate women is "large nonlinearities and convexities in pay." This is economist-talk for saying that many high-paying jobs require that the worker be available or at least potentially on call much more than 40 hours per week. Goldin writes:

Many jobs, especially the higher-earning ones, pay far more on an hourly basis when the work is long, on-call, rush, evening, weekend, and unpredictable. And these time commitments interfere with family responsibilities. ... For many highly educated couples with children, she’s a professional who is also on-call at home. He’s a professional who is also on-call at the office. In consequence, he earns more than she does. That gives rise to a gender gap in earnings. It also produces couple inequity. If the flexible job were more productive, the difference would be smaller, and family equity would be cheaper to purchase. Couples would acquire it and reduce both the family and the aggregate gender gap. They would also enhance couple equity.

In normal times, Goldin's usual recommendation is that organizations should seek to reorganize work to create more "temporal flexibility" so that tasks can be handed off, rather than relying on individuals to march though extra-long workweeks, and some professions have made steps along these lines. She writes:

Clients could be handed off with no loss of information. Successfully deployed IT could be used to pass information with little loss in fidelity. Teams of substitutes, not teams of complements, could be created, as they have been in pediatrics, anesthesiology, veterinary medicine, personal banking, trust and estate law, software engineering, and primary care.

But we aren't in normal times, what Goldin calls the BCE period (that is, Before the Corona Era). Instead, we have been living through the DC (During Corona) period and hoping to reach the AC (After Corona) period. Goldin looks at time-use data to show that the hours needed for child-care increased dramatically when the pandemic hit in March and April 2020. But at that time, it was common for both parents to be at home, and so the extra child-care burden was distributed somewhat evenly. But looking ahead, one likely outcome is that the college-educated male workers will be called back to their jobs that require especially long hours, while the college-educated female workers will then become responsible for a rising share of the greatly extended child care hours: "If history is any guide, men will go back to work full time and revert to their BCE childcare levels. Women will take up the slack and do a greater share of the total."

Goldin offers a thought experiment for how government might respond in the COVID era with a Civilian College Corps:

When public and free elementary schools spread in the United States in the 19th century, and when they expanded during the high school movement of the early 20th century, a coordinated equilibrium was provided by good governments. Good government today could do the same thing. We need to find safe ways to have classes for children — for their futures and for their parents’. ...

Today, many of the unemployed are highly educated recent college graduates and gap-year college students with little to do. They could be harnessed in a new Works Progress Administration manner and put to work educating children, especially those from lower-income families. They could free parents, especially women, to return to work. I’ll repurpose a name and call them the “Civilian College Corps” — a new CCC.

Some of the Corps’ educational work could be done remotely. The Corps could support beleaguered parents too exhausted to correct their children’s essays and too confused to help their children with algebra. Other Corps members could be in the classroom, helping districts cope with having fewer teachers because some older teachers don’t want to return to a school building. The Corps could employ those without jobs, meaning, and direction and give them something worthy to do: educate the next generation and help women go back to work full time, either in their homes or on-site.