Why Has US Regional Convergence Declined?

Why Has US Regional Convergence Declined? 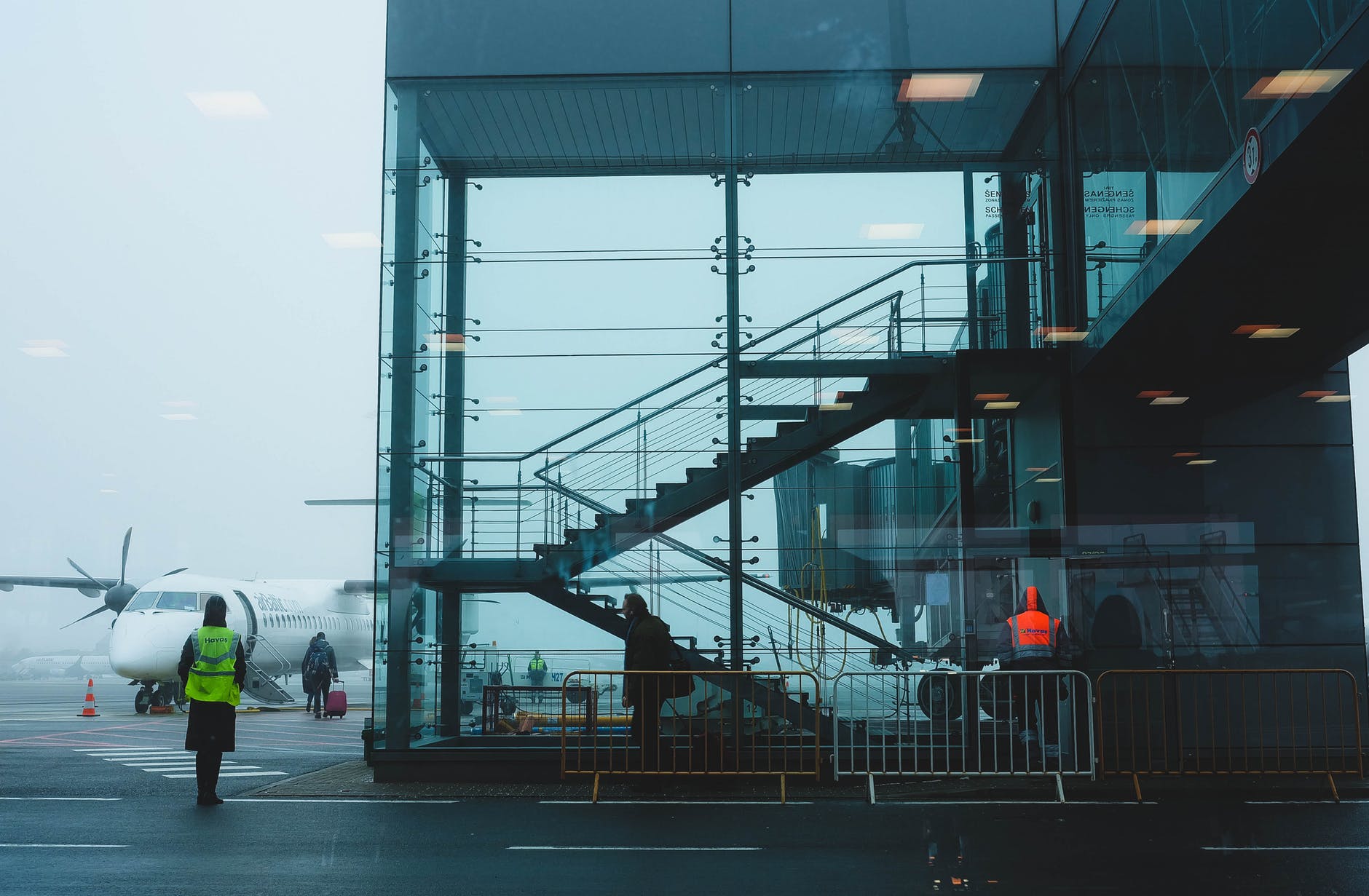 In the decades after World War II and up into the 1980s, the US economy experienced regional convergence: that is, the economies and incomes in poorer regions (like the US South) tended to grow more quickly than the economies of richer regions (like the US North). But in the 1980s, this pattern of regional convergence slowed down.

A couple of recent research papers have investigated the shift. Peter Ganong and Daniel W. Shoag have published "Why Has Regional Income Convergence in the U.S. Declined?" in the Journal of Urban Economics (November 2017,  pp. 76-90). The paper isn't freely available online, but some readers will have access through library subscriptions, and there is a July 2016 version freely available as a Hutchins Center working paper. Elisa Giannone adds some aditional pieces to the puzzle in "Skilled-Biased Technical Change and Regional Convergence" (January 4, 2017), written as part of her doctoral dissertation.

Both papers are tackling the same basic fact pattern, although with different data sources. Thus, Ganong and Shoag write:

"The convergence of per-capita incomes across US states from 1880 to 1980 is one of the most striking patterns in macroeconomics. For over a century, incomes across states converged at a rate of 1.8% per year. Over the past thirty years, this relationship has weakened dramatically, as shown in Figure 1.1 The convergence rate from 1990 to 2010 was less than half the historical norm, and in the period leading up to the Great Recession there was virtually no convergence at all."

Here's a figure to illustrate the pattern. In the left-hand panel, the horizontal axis measures the per capita income of states in 1940. The vertical axis shows the growth rate of state per capita income from 1940-1960. The downward-sloping line shows that the lower-income states in 1940 tended to have faster growth in the two decades that followed. The right-hand panel does the same exercise, but this time starting in 1990 and running through 2010. The downward-sloping but much flatter line in the right hand panel shows that while the lower income states in 1990 did grow a bit more quickly in the next two decades, the rate of convergence had become much slower. 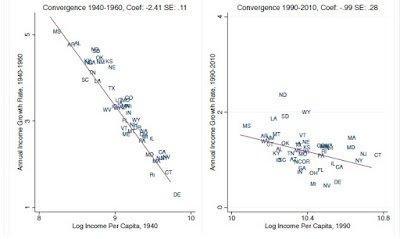 A similar pattern shows up with what the authors call "directed migration," or movement of people from lower-income to higher income states: that is, the amount of such movement has declined substantially in the last few decades.

In her paper, Giannone is using city-level data, rather than state-level data, and she writes: "Between 1940 and 1980 the wage gap between poorer U.S. cities and richer ones was shrinking at an annual rate of roughly 1.4%. After 1980, however, there was no further regional convergence overall."

A number of economic models predict convergence between regions. After all, people from lower-wage regions have an incentive to move to higher-wage regions, and some of them will do so. Conversely, firms have some incentive to invest in plant and equipment where the labor force and land are cheaper, and some of them will do so. Over time, these patterns should lead to a degree of convergence. What has changed?

Giannone offers a a different explanation based on "skill-biased technical change," which is the lingo for when a certain kind technological progress tends to help those with higher skills (and wages) more than those with lower skills (and wages). Her evidence suggests that the decline in convergence only happened for college-educated workers, while wages for workers with less education continued to converge. Moreover, her evidence shows that in a certain number of cities, the premium paid for  high-skill workers increased dramatically--even as more high-skill workers migrated to those cities. Her argument is that "agglomeration effects," which refer to the notion that a lot of skilled workers in close proximity may generate an extremely high wage urban economy (for example, think Silicon Valley).

These explanations based on technological change and housing markets are potentially complementary, and they do not exhaust the possibilities for why mobility across regions, and thus economic convergence, has declined. For example, last month I posted about David Shleicher's argument that ("Why More Americans Seem Stuck in Place," December 7, 2017). He attributes much of the issue to state and local laws affecting housing, jobs, and personal finance. For example, he wrote:

Many countries have longstanding divergences in income between certain areas or regions: north and south, east and west, coastal and inland, rural and urban. The power of economic convergence can reduce such differences over time, but only in very rare occasions does it eliminate or overturn such differences. However, mobility across regions isn't just about economic convergence. It's also about a whether people in all areas have a sense of opportunity; whether people in the lower-income areas know a few people who moved elsewhere and enjoyed it; whether people from higher-income areas have friends with family and personal connections in lower-income areas. Those who move across regions are a kind of social bungee-cord, so that the distance between geographic areas isn't just measured by mileage on a map, but is bridged by human connections as well.