Alberta Border Blockade – Why is it Continuing?

Alberta Border Blockade – Why is it Continuing? 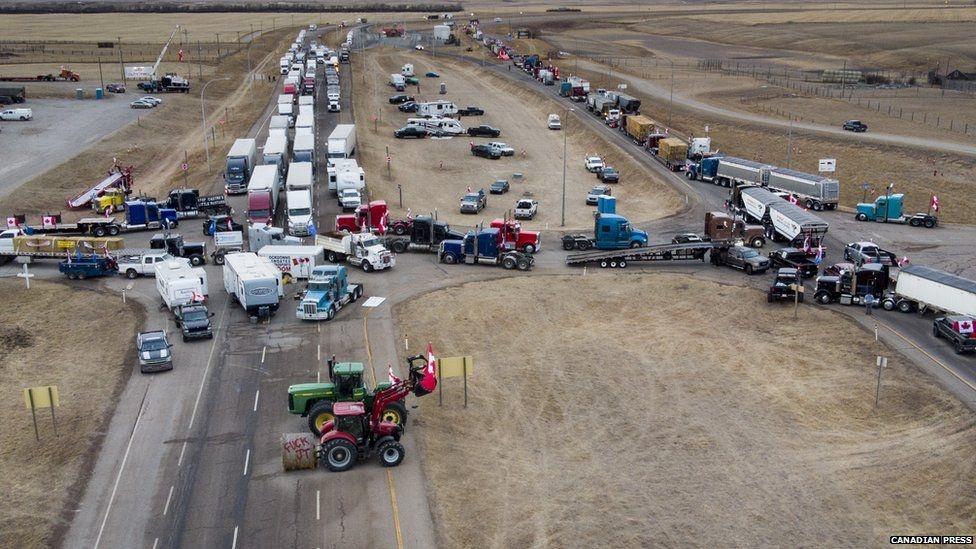 Alberta is the fourth most populous province in Canada with only a single 24-hour border crossing (Coutts, Alberta) with the US that has the facilities to handle the volume and specialized commercial traffic leaving Canada.

The US is Canada’s largest trading partner, and Canada is the US’s largest trading partner. However, for the past four days, the crossing, as well as 10 miles of highway north of Coutts, has been closed to traffic going both ways by anti-vaxxers (and other anti-everythings) demanding the resignation of both the Premier of Alberta and the Prime Minister of Canada as well as the ending of all restrictions related to COVID. They have stated that the blockade will continue until their demands are met.

Not a great situation.

The blockade is illegal and carries a minimum fine of $10,000 (maximum fine of $25,000) for any person who prevents the passage of goods or persons from entering or exiting Canada. Given the number of people involved, that is a lot of fine. However, there won’t be any fines.

Alberta is the most conservative province in Canada. The protesters are all conservatives (or further right). Although they only represent 20% of the people in Alberta, they are brash and vocal in their demands. Premier Kenny needs their support to win the next election, and so with his usual arrogance, Kenny has said almost nothing about the blockade other than to say that it is illegal. Oh, and he added that the situation needs to be handled by local authorities, not the Provincial government.

Handled by the local authorities? They have only one. Coutts is a village of 245 people (2016 census), and they have a mayor – the local authority. Coutts is also among the most conservative areas in the overwhelmingly conservative province. Prior to the blockade, the mayor welcomed and supported the protest – as does the current MLA (elected provincial representative for the area). The MLA was at the protest on day 1 to show his support. He has since said that it is illegal but has stopped short of saying that it should be dispersed.

I support the right to protest, but the protest must be legal and peaceful. When there is a blatantly illegal protest, why is it allowed to continue? – political expediency.

I would love to see the premier resign and call an election with the COVID restrictions (and previous handling) as the primary issue. With 80% of the residents of Alberta vaccinated and cooperating, I think that the government might be in trouble (maybe).

The question I have at this point is, “If this were a Black Lives Matter (BLM)” blocked the border crossing, would it have been allowed to continue for even four hours? I doubt is, for the same reason that this blockade is allowed to continue. Most of the protesters in the current blockade oppose the very idea of BLM. Kyle Rittenhouse, the vigilante who murdered two protesters in a Wisconsin BLM protest, was hailed as a martyr (before he was acquitted) by a number of these same protesters. I am certain that black-uniformed RCMP officers with helmets and face shields, along with a significant cohort of vigilantes for support, would be monitoring a Black Lives Matter protest from day minus 60 to minute 240 of the blockade began before rolling in with water cannons and truncheons to disperse the illegal blockade.

I also believe that, following a BLM protest, Premier Kenny would hail the heroism of the police officers facing such a dangerous situation and destroying the domestic terrorism threat posed by the protesters.

Why is this blockade dragging out? Because Premier Kenny has no interest in good governance, only in holding on to power. Will his Premiership end? I have my doubts. Although the vast majority of Albertans deplore the way the Premier’s office has handled COVID, and now this blockade, their collective amnesia and uncritical support of conservatism will return the Premier to office in 2023.