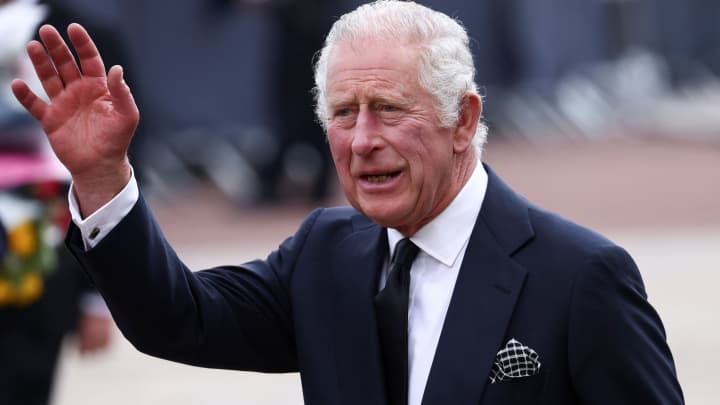 This is the first visit to the country by a British king in nearly 80 years.

Several political leaders from across the Northern Ireland political spectrum have gathered outside Hillsborough Castle.

His Majesty said that the Queen "never ceased to pray for the best of times" for Northern Ireland in a short speech at Hillsborough Castle.

Thousands of people are continuing to file past the Queen's coffin at St Giles' Cathedral in Edinburgh.

King Charles and Camilla, the Queen Consort, went to St Anne's Cathedral for a community service for the people of Northern Ireland, to remember the Queen.

In Northern Ireland, people’s attitudes to the monarchy tend to be linked to their national identity.

For unionists – who want Northern Ireland to remain in the United Kingdom – the sovereign is the personhood of Britishness, embodying the authority of the crown as a unifying force across the UK’s four nations.

Elsewhere in Northern Ireland, people are beginning to gather near Belfast City Hall, where the King and Queen Consort will pass later this afternoon.

A national minute's silence has been announced for 8pm on Sunday - the night before the Queen's funeral in Westminster Abbey.

King Charles will not pay tax on inheritance from the Queen.

The monarch is exempt under 1993 agreement but Charles will pay income tax as his mother did.

Under a clause agreed in 1993 by the then prime minister, John Major, any inheritance passed “sovereign to sovereign” avoids the 40% levy applied to assets valued at more than £325,000.

The crown estate has an estimated £15.2bn in assets, of which 25% of the profits are given to the royal family as the sovereign grant. The estate includes the royal archives and the royal collection of paintings, which are held by the monarch “in right of the crown”.

These assets cannot be sold by the King and they are in effect surrendered to the government in return for a grant. The government’s guidance concludes that it would therefore be “inappropriate for inheritance tax to be paid in respect of such assets”.

Separately, Charles also inherits from the Queen the Duchy of Lancaster, a private estate that includes a portfolio of lands, properties and assets held in trust for the sovereign.

He is exempt from inheritance tax on these assets, among others, in order to preserve “a degree of financial independence from the government of the day”.