Common sense in AI is about AI going beyond its limitations to become ‘truly’ intelligent.

John McCarthy, the father of AI, defined AI as “The science and engineering of making intelligent machines, especially intelligent computer programs.” AI is a technology that makes a computer, robot, or a program behave intelligently and perform tasks that were previously never expected from machines. Artificial intelligence primarily helps in creating expert systems that can exhibit intelligent behavior, learn from their users, and demonstrate what they think is best under a particular situation. Apart from helping people in certain circumstances, AI also allows machines in understanding and accepting the behavioral traits from their users. Artificial intelligence helps industries globally in numerous ways; some of them include natural language processing, speech recognition, handwriting recognition, and robots that assist in learning and healthcare. AI works with the support of algorithms provided to them. With these algorithms, AI performs tasks that help people in a plethora of ways. However, the lack of common sense in AI has led to reservations in the minds of those who want to use the technology for more innovative applications. 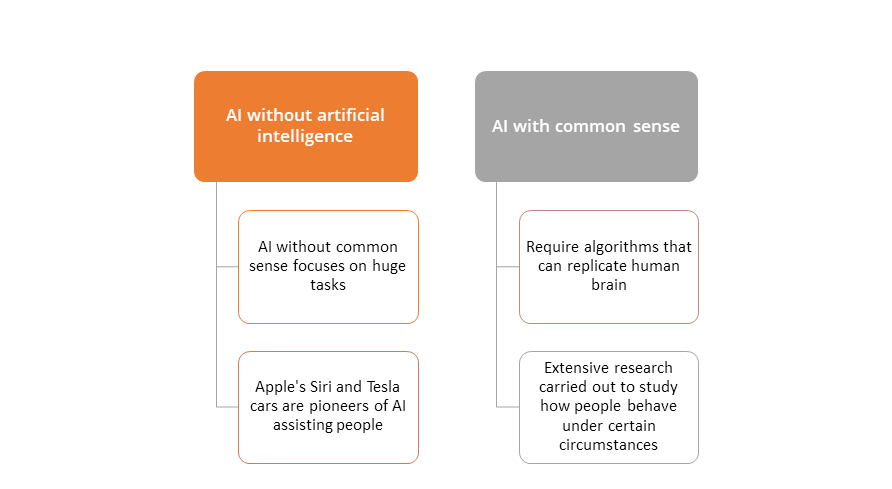 Applications of AI are numerous, and the way it assists people in automating specific tasks is remarkable. People have been surrounded by this technology for a long time now. Apple’s Siri is an application that is one of the best artificially intelligent assistants that can assist people by reminding them of how they need to perform specific functionalities. Tesla is a company that produces driver-free cars that can be termed smart because of their features. The cars built by Tesla are also an example of how AI has a widespread reach and how people are leveraging it. As artificial intelligence works on how it can automate specific tasks, programmers provide algorithms that allow such smart things to behave in certain situations. But when the machine reaches a point where they have to make a decision that is solely reliant on gut feeling, AI bots tend to fall short of specific functionalities. Artificial intelligence made it to the headlines when it defeated the best player in the world in the game of GO, but AI was not able to win a game of domino based on sheer common sense.

As artificial intelligence is a technology that helps people with more significant tasks, programmers did not create algorithms that can support such machines in making everyday decisions. Even after being able to perform complex actions, the bots did not know how to behave in certain situations. Developers realized the problem and researchers began to create algorithms that can help AI in becoming smarter by giving it common sense. But obstacles stood immense as researchers realized that for providing common sense to AI, machines had to first map to how humans reacted in similar situations. For a device to become as smart as a human being, researchers would require extensive investigation.Researchers realized that for giving AI common sense, they need algorithms that can replicate the human brain. In 2013, MIT researchers came up with BullySpace that works towards scanning taunting social media remarks. As these remarks are detected using the ‘common sense algorithms’, developers learned to leverage this technology. However, apart from leveraging, CTOs and CIOs should also focus on how their employees can be trained to capitalize AI and keep the technology insafe hands to avoid the wrong usage of AI.