I can guess what some of you must be thinking: what do you mean, gets personal? Wasn’t prostate screening already quite personal? What, after all, could be more personal than an examining finger inserted into your…well, you know where the prostate is.

But despite the notoriously discomforting (for doctor and patient alike) intimacies of a digital rectal exam (DRE), there’s nothing much personal about it from a formally medical perspective. Besides, while still included in the comprehensive physical exam for various and perhaps dubious reasons, the DRE has long been supplanted by the PSA (prostate specific antigen) blood test as the primary approach to prostate cancer screening. Either way, screening is fairly standardized and involves much the same maneuver for everyone with the requisite anatomy.

Personalized medicine, and thus the genuinely personal approaches to assessment and treatment of which it is comprised, is something quite different from any one-size-fits-all procedure. The cardinal element is that decision-making should be individualized, and care for each patient customized based on a unique profile. That profile can include everything from basic demographic factors, to metabolic markers of risk, to family history, to genomic and even microbiomic patterns. The general idea is that what’s specifically best for you is better- for assessment, treatment, avoiding side effects, prognosis, etc.- than what’s basically appropriate for everybody.

Prostate cancer screening by means of PSA testing was officially marshaled into the domain of the personal recently by the US Preventive Services Task Force (USPSTF). Their draft conclusion about the overall utility of screening is that they couldn’t reach a decisive conclusion, and you and your doctor should decide.

For those of us in Preventive Medicine, the USPSTF has long been revered, and their recommendations considered the veritable bible of clinical preventive services. The Task Force is a bit “by” the government, but neither “of” nor “for” it. This multidisciplinary group of experts is convened partly at the invitation of the federal government, but operates independently. Recommendations are made for the benefit of public health, and are very strictly evidence-based.

Evidence-based decision making to guide public policy is obviously a good thing in general, but it can be a double-edged sword. Many conclusions now reliably reached on the basis of solid evidence would clearly not have been wrong a decade ago when that evidence wasn’t in yet, but could not have been reached at that time. Absence of evidence, in other words, is very different from evidence of absence. The important implication is the obvious one: there are conclusions we can’t reach today because the relevant evidence won’t accrue for another year, or ten, or more.

One of the dangers in the application of very strict standards of evidence is that those items that are still subject to uncertainty will be deemed less worthy, rather than simply less mature. Since the Task Force recommendations are highly influential and routinely translate into reimbursement norms, this danger could mean: insurers will not cover what is not formally recommended. But that banishes to the realm of uncovered medical expense both some of what will prove to be baby, along with what will prove to be bathwater.

That leads us back to prostate cancer screening. The Task Force assigned a grade of “C” on their letter grade scale, indicating that net benefit for the population is almost certainly small at best, but that benefit for select individuals was both possible, and hard to predict. By deferring decision-making to the dialogue between patient and doctor, the Task Force is also saying that insurers should cover any testing that results from that discussion. 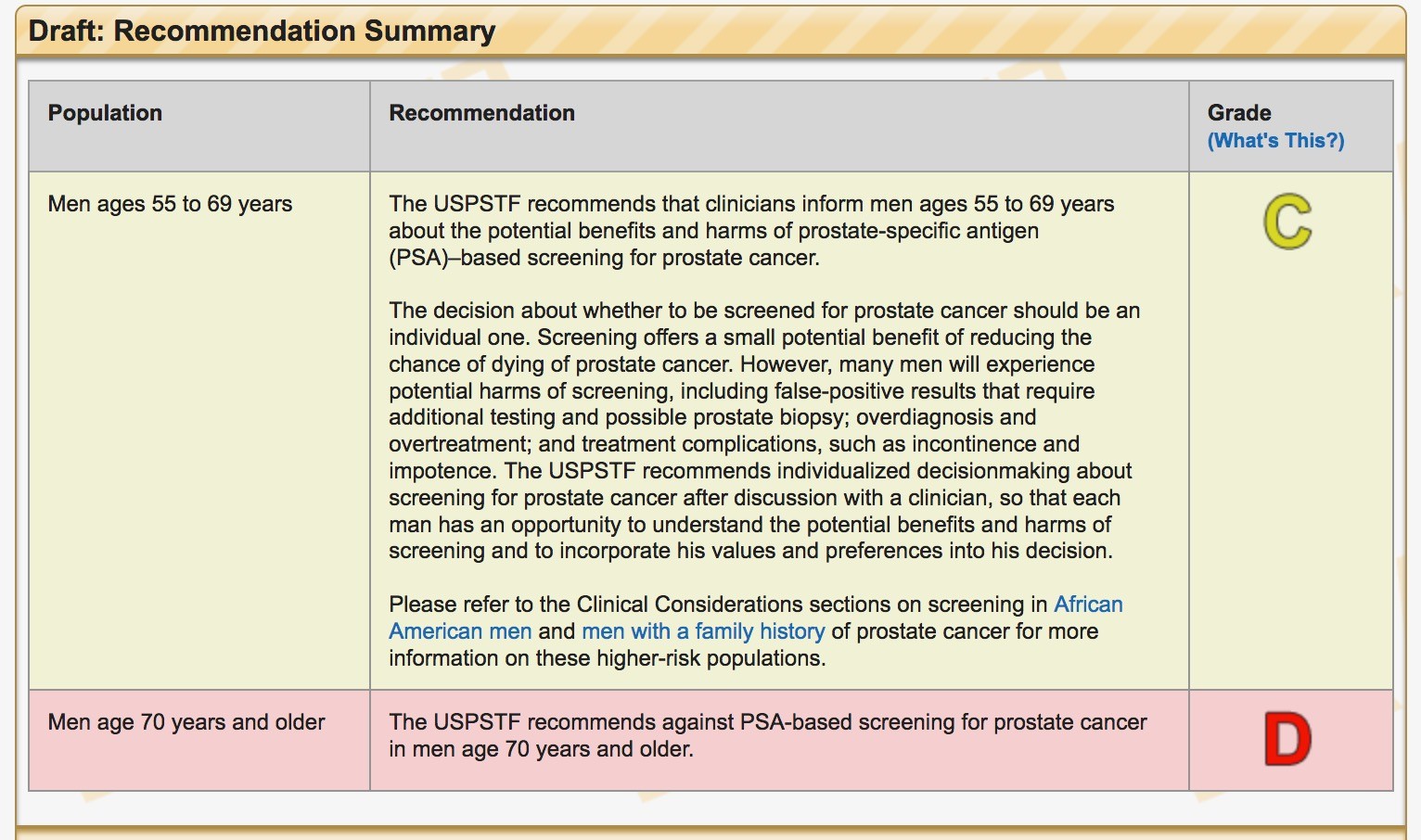 In a sense, the Task Force also rendered a verdict about evidence in general. By deferring decisions about best course to clinicians and patients, they are telling the world that despite reviewing all the relevant evidence, they don’t know the one, right answer. Not knowing that universal prostate cancer screening is a good idea is not the same as knowing it’s a bad idea. The Task Force is reminding those prone to rigid sanctimony about scientific evidence that it evolves over time, and at any given time can be murky for many reasons: it is insufficient in quantity or quality, the findings are inconsistent, or key studies have yet to be done. By leaving the door ajar for future decisions, the Task Force is reminding their constituencies of the crucial difference between absence of evidence and evidence of absence. Those constituencies include miscellaneous standard-bearers of evidence-based medicine who at times get carried away; and third-party payers who might be tempted not to cover what is not explicitly recommended. But deferring to patients and their doctors is an implicit recommendation to respect and pay for the decisions that ensue. Perhaps, too, the Task Force is implying that when uncertainty is greatest, so, too, must be respect for patient autonomy.

Why isn’t it obviously a good idea to screen all men for prostate cancer, since the disease is prevalent, and treatment established? There are several reasons.

First, testing is prone to errors in both directions. PSA levels can be elevated in the absence of cancer (false positives), and sometimes normal in spite of it (false negatives). The former failing can lead to additional, unnecessary testing, even including biopsy. The latter can confer a false and dangerous sense of security.

But the main problem with prostate cancer screening is not difficulty in finding the cancer, but difficulty in predicting its behavior. The majority of men (roughly 80%) who die after age 80 die with, but not of, prostate cancer. In other words, most guys who live long enough get this “disease.” But most of this cancer never progresses to cause symptoms or compromise overall health. The same is true at younger ages, albeit less common. When such cancers, destined to be indolent, are treated- the cure is often far worse than the disease, imposing risks from infection to erectile dysfunction to incontinence. This is why prostate cancer screening, which can save lives, can also hurt far more people than it helps.

Cancer screening is, quite literally, looking for trouble. When you can reliably find what you’re seeking, and reliably know what to do about it, that errand makes good sense as a matter of routine, because early treatment options are generally far better than late treatment options. But when cancer behavior is highly unpredictable, then looking for trouble may simply result in finding it. The Task Force has acknowledged the dilemma.

There are dual advantages in personalizing the approach to screening. First, even when risk factors are comparable, dispositions can vary. Some people simply much prefer knowing to not knowing, even if knowing introduces its own challenges. Second, variation in risk factors, notably family history, can alter the ratio of potential harm to likely benefit.

Since I am a male of a certain age, it may interest you to know that while I reliably get screening of clearer benefit, from cholesterol to colonoscopy, I do not get screened for prostate cancer. I use lifestyle as my medicine to minimize my risk. My advice to you if you share my demographic is: see a doctor you trust, and have the conversation.

Individualized decisions about prostate screening born of discussion between doctor and patient are more personal than personalized. The hope is that a truly “personalized medicine” approach will evolve, in which those decisions are informed not only by preference, but by biologic indicators that reliably point to the best choice. Ultimately, a better answer than personalizing decisions about marginally good screening is enhancements to screening. Efforts are well under way to advance that agenda, and barring draconian cuts to the federal research funding that fuels them, should get us there sooner than later. For now, prostate cancer screening isn’t formally personalized yet, but it is officially personal.

View all
The Benefits Of Electrical Equipment Preventive Maintenance
It’s Time To Replace RPA With IPA In Recruitment Procedures
A Recruitment Technology That Goes Beyond CV Keywords
Diversify Your Company with Auxiliary Services
4 Things You Need To Start Building Your Personal Brand
Big Data's Role in Investment Management
Blackstart: How the Grid Gets Restarted & Why It Matters
Help After a Hurricane: Rebuilding Finances After a Storm
Everything You Need to Know About Climate Change
How The Internet of Things Can Promote More Sustainability
Expert Tips To Create An Environmentally Conscious Workplace
Climate Emergency Innovations and Insights in Business
Considering A Remodel? Here Are 6 Tips To Stay On Budget
Applications of Neural Networks in the Insurance Industry
When Should You Get an Emergency Loan
Why Do You Need Car Insurance?
A Short Guide to Employee Group Life Insurance
Benefits of VR L&D Training for Higher ROI
Female Autonomy and Economic Development
Marwan Kheireddine: Going ‘Back to Basics’ Can Rescue Lebanon’s Economy
The Challenges of Measuring Discrimination Against LGBTI Individuals
When Surrounded By Exponential Growth, “Wait and See” Can Mean Missing An Opportunity
HR Digital Transformation and the Rise of AI in the Corporate World
Peltzman on Stigler on Regulation
The Safest and Most Dangerous Places to Work in the UK
Investment Charges When Mexico Privatized Social Security
Henry Adams on the Corruptions of Power
Former Pakistan Prime Minister Imran Khan Shot in Foot in Clear Assassination Attempt
Benjamin Netanyahu Set to Return as Israel's Prime Minister
Reflections on Sources of US Energy Consumed
6 Tips To Help You Stay Looking Young
The Science Behind Hydroponic Food Systems
How Big Data, AI, IoT and Deep Learning Are Powering Modern Healthcare
The Top 6 Probiotic Strains for Gut Health
6 Things to Keep In Mind When Buying Medical Equipment
How AR Dispels Phobias In Individuals
How To Choose The Right Glasses For The Shape Of Your Face
Everybody Starts Someplace
6 Types Of Exercise Everyone Should Do On A Regular Basis
Higher Education and Critical Thinking
What Is A Wrongful Death And How To React In Such Situations
What Are the Principles of Elder Mediation?
How Computer Vision is Transforming the Retail Industry
Is Your Mobile Plan Working for You? 3 Signs You May Need to Switch
How To Find The Top Healthcare IT Specialist
What Is Domain Name Registration and How Is It Done?
The Boring Technology Transformation
How Blockchain is Changing the Manufacturing Industry