Sugar. An essential nutrient? A cause of obesity and disease? A toxin? Call it what you will, sugar plays a huge role in our lives.  From 1, 6 fructose di-phosphate and its essential metabolic role in the Krebs cycle to the ubiquitous "high fructose corn sugar" that flavors -- for better or worse -- our world. Sugar is all around us. And where there's sugar, there are sugar substitutes.

Here are the big three!  Equal, Sweet'n Low and Splenda.  The names conger up lovely thoughts and images of equality, sweetness (and you can cheat) and dietary splendor!  But there's something even more interesting and perhaps even more basic.  It's the colors that have been choosen.  Light blue, soft pink and yellow. 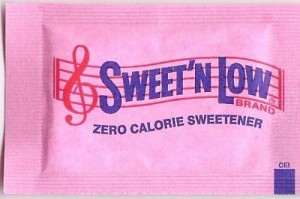 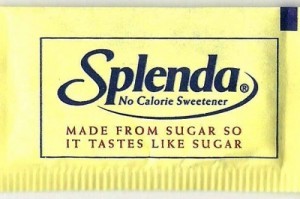 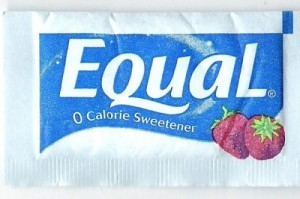 Think about it. What topic owns these three colors (other than sugar substitutes)?

Babies!  Blue for a boy.  Pink for a girl.  And yellow, if you don't know. So, here we have the clash of two worlds!!  The purity of a new born baby with the complexity of sugar substitutes. And what is the primary way a sugar substitue makes its way to our food? A lovely little packet. And there you have it. Sweet'n Low, Equal and Splenda as BABY BLANKETS! There could be nothing as sweet, safe and less threatening!

Let's look a little bit deeper. The National Cancer Institue has a lot to say about the history of sugar substitutes.  (And it's right from their website.)

Studies in laboratory rats during the early 1970s linked saccharin with the development of bladder cancer. For this reason, Congress mandated that further studies of saccharin be performed and required that all food containing saccharin bear the following warning label: “Use of this product may be hazardous to your health. This product contains saccharin, which has been determined to cause cancer in laboratory animals.”

Subsequent studies in rats showed an increased incidence of urinary bladder cancer at high doses of saccharin, especially in male rats. However, mechanistic studies (studies that examine how a substance works in the body) have shown that these results apply only to rats. Human epidemiology studies (studies of patterns, causes, and control of diseases in groups of people) have shown no consistent evidence that saccharin is associated with bladder cancer incidence.

Because the bladder tumors seen in rats are due to a mechanism not relevant to humans and because there is no clear evidence that saccharin causes cancer in humans, saccharin was delisted in 2000 from the U.S. National Toxicology Program’s Report on Carcinogens, where it had been listed since 1981 as a substance reasonably anticipated to be a human carcinogen (a substance known to cause cancer). More information about the delisting of saccharin is available at http://ntp.niehs.nih.gov/ntp/roc/eleventh/append/appb.pdf on the Internet. The delisting led to legislation, which was signed into law on December 21, 2000, repealing the warning label requirement for products containing saccharin.

Aspartame, distributed under several trade names (e.g., NutraSweet® and Equal®), was approved in 1981 by the FDA after numerous tests showed that it did not cause cancer or other adverse effects in laboratory animals. Questions regarding the safety of aspartame were renewed by a 1996 report suggesting that an increase in the number of people with brain tumors between 1975 and 1992 might be associated with the introduction and use of this sweetener in the United States. However, an analysis of then-current NCI statistics showed that the overall incidence of brain and central nervous system cancers began to rise in 1973, 8 years prior to the approval of aspartame, and continued to rise until 1985. Moreover, increases in overall brain cancer incidence occurred primarily in people age 70 and older, a group that was not exposed to the highest doses of aspartame since its introduction. These data do not establish a clear link between the consumption of aspartame and the development of brain tumors.

In 2005, a laboratory study found more lymphomas and leukemias in rats fed very high doses of aspartame (equivalent to drinking 8 to 2,083 cans of diet soda daily) (1). However, there were some inconsistencies in the findings. For example, the number of cancer cases did not rise with increasing amounts of aspartame as would be expected. An FDA statement on this study can be found at http://www.fda.gov/NewsEvents/Newsroom/PressAnnouncements/2006/ucm108650.htm on the Internet.

Subsequently, NCI examined human data from the NIH-AARP Diet and Health Study of over half a million retirees. Increasing consumption of aspartame-containing beverages was not associated with the development of lymphoma, leukemia, or brain cancer (2).

In addition to saccharin and aspartame, three other artificial sweeteners are currently permitted for use in food in the United States:

Before approving these sweeteners, the FDA reviewed more than 100 safety studies that were conducted on each sweetener, including studies to assess cancer risk. The results of these studies showed no evidence that these sweeteners cause cancer or pose any other threat to human health.

Because the findings in rats suggested that cyclamate might increase the risk of bladder cancer in humans, the FDA banned the use of cyclamate in 1969. After reexamination of cyclamate’s carcinogenicity and the evaluation of additional data, scientists concluded that cyclamate was not a carcinogen or a co-carcinogen (a substance that enhances the effect of a cancer-causing substance). A food additive petition was filed with the FDA for the reapproval of cyclamate, but this petition is currently being held in abeyance (not actively being considered). The FDA’s concerns about cyclamate are not cancer related.

The bottom line here is that commercially available products have undergone extensive testing and do provide a significant value.  The caloric considerations of sugar and the associated products  (and the resulting obesity) need to be considered the lower calorie alternatives and may, in the final analysis, proved to be a superior option.  But as a marketer and brander, you must consider the baggage that accompanies these compounds.  Dark, powerful colors would just send the wrong message...and build the wrong brand!

And now, green with envy!

One final note in the evolution of this category.  It's the introduction of  Truvia.  But where do you position another brand...and pick the "next baby blanket"?  Well, as it turns out, Truvia is positioned--exactly upon the scientific and consumer concerns--as natural!  And where does color theory take us?  Green! And of course, it's a nice soft green...kinda like a baby blanket!