If you don't like something, change it. If you can't change it, change your attitude.

When former Detroit denizen Jeff Laine made it out to Los Angeles, he fronted a rock band called “Hollywood Underground” and was signed to a division of Capitol Records, the very first record company based on the West Coast. Yeah, you know, he was part of the conglomerate that has that instantly recognizable building at Hollywood and Vine, with the Walk of Fame stars of The Beatles and many icons of the music business imprinted on the pavement for all time.

Fast forward to now, rocker Jeff Laine has transformed into a purveyor of the Blues called Solomon King. Earning a Grammy nomination for his debut Blues recording in 2009, called Under the Sun, Solomon King has earned his props playing at Blues clubs in LA and across California and continental USA and even out to Hawaii. 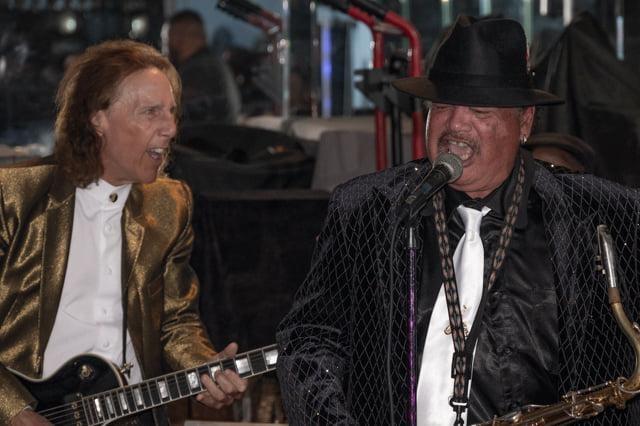 Most importantly, Solomon had grown a fan base playing at legendary LA clubs like Babe’s and Ricky’s where Mama Laura Mae Gross championed him, along with The Living Room and The Desert Room. Consequently, Solomon recently got an invitation to the first annual Kings and Queens of the Blues awards show in Inglewood in LA. King recalls, “I told them I’d be happy to come. Then two days before the event I got a phone call to perform that evening. So, I got decked out in a gold lame suit, crisp white shirt, gold boots and showed up. And, I brought my 57’ Gold Top Les Paul just like when I started out playing for Mama Laura at Babe’s and Ricky's way back when, in my Blues career.” 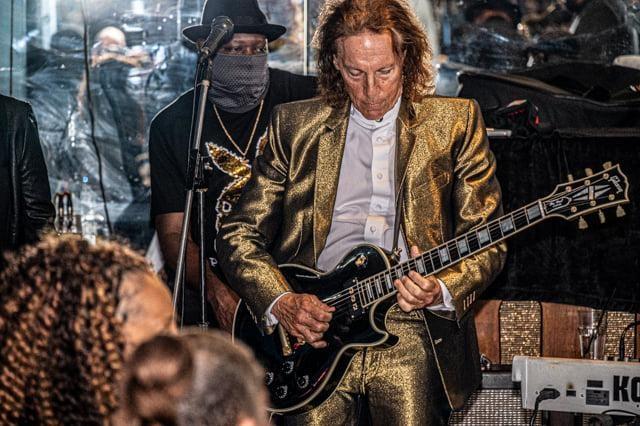 Additionally, he chuckles, “You know, there’s a lot of people who sing better. A lot of people play guitar better than me, but no one’s got my wardrobe! I really didn’t know what to expect as I’d just come to sit in with legendary Lester Lands and his band. The place was packed and when I made my way inside, I saw all these awards on a table. The host asked who I was. When I told him, ‘Solomon King,’ he said, ‘We’re going to have something for you.’ Really, I wondered what? Then I was called up to the stage. We played a couple tunes and everybody seemed to like it fine. And, I went to the back bar to just relax and hang out.” 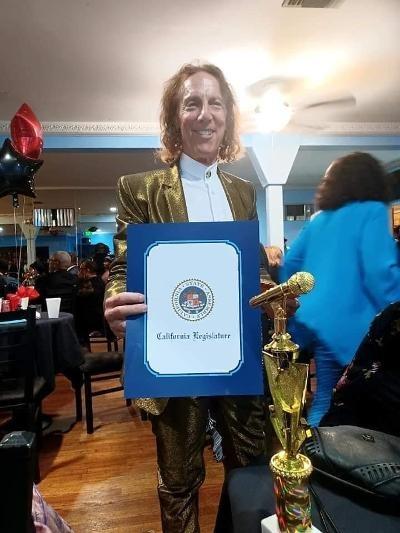 However, he heard people calling out for him. When he returned to the main room, they were handing out awards and, as promised they had something for Solomon. He enthuses: “What a great honor it was to be acknowledged in this community. These guys are really good, they’re the real thing. Sure enough, I got a gorgeous ‘Blues Man’ statue and two certificates from the State of California and from the City of Los Angeles for my contribution to the Blues and its community. Who knew?! I wished my own Mama (Marilyn) had been there to see this but she is gone. When I got home, I looked at my calendar. It was April 09, which was my own Mama’s exact birthday.”

Always the rebel, Solomon King concludes with a quip, “It’s already too late to change my attitude.”

Check out Solomon King’s Music website for new music and upcoming gigs. Drop in on his pages at Instagram, YouTube, Facebook. And, sample his music on streaming sites, Spotify, Apple Music, and Soundcloud. King’s new video for Sunset & Mars will drop soon. Above performance photos by Malcolm Owen.