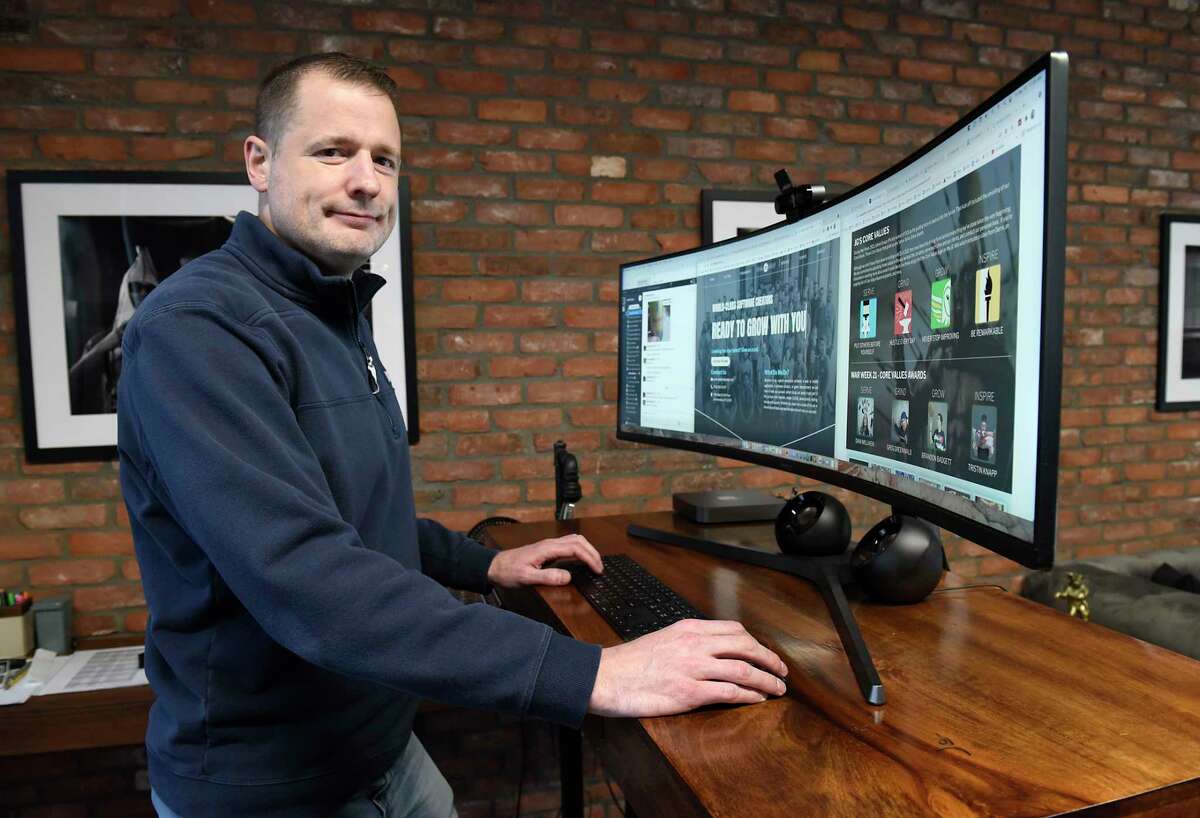 It’s time to reassess the culture of your company in the post-pandemic world.

To share how they’ve transitioned their culture as the organisation has grown to just over 150 people in 6 years, is co-founder and CEO of Jahnel Group, Darrin Jahnel.

In this interview, Darrin explains why they’ve moved away from an executive team to implementing an extended leadership team, why he’s maniacal about company culture, and why they believe they’ve cracked the code on hybrid working. He also talks about inclusion, how he’s got people to show up to work being their authentic selves, as well as a fantastic metric for how many culture drivers per employee you need in your business.

How to Grow Your Company Culture with Darrin Jahnel

Darrin Jahnel is the founder and CEO of Jahnel Group, a 150+ person software consulting company that develops web-based software applications that help businesses get things done more efficiently. Sometimes they design and build an entire application, other times they augment a pre-existing team.

Darrin leads with energy and is maniacally focused on creating an amazing work environment for his team. Jahnel Group made the Inc 5,000 list 6 years in a row and has won multiple best workplace awards for their amazing culture.

In this interview, Darrin shares what you need to do to ensure your company culture doesn’t just remain strong, but thrives as the company scales past 40 people, past 100 people, and onwards to the stars.

So, what does Jahnel Group do?

“If you boil our business down to its absolute simplest form, we provide great software creators…We’re world class at recruiting people, selling them on what we’re doing. And then putting them in an environment where they can be happy, where they can just live a great life, where they can do awesome things personally and professionally.”

Great Culture Starts with Having a Great Team

You can’t create a great culture, says Darrin, if you don’t have the right people on your team to start with. But that’s easier said than done.

To put it into perspective, their own recruiting funnel looks like this:

Well, says Darrin, it’s a mix of job ads and outreach. It’s about making noise and positioning yourself as a great employer to both people looking to advance their careers, as well as those just starting out in the job market.

How to Create a Buzz

And that’s just the type of people they encourage to come onboard by creating the right environment, inviting people to come work for the organisation, and then reward them by setting them up to live an extraordinary life.

The normal employer/employee relationship, says Darrin, is the employer is up here, whereas the employee is down there. But at Jahnel Group, they aim to flip that notion on its head. Rather than – what can you do for me? They ask the employees, what can we do for you? How can we serve you to make sure you live the life you want?

Creating a remote culture is difficult, says Darrin, but they think they’ve cracked the code.

You see too many times an HR director saying ‘we’re going to make a remote culture’ and then set up a virtual happy hour where 10 software engineers gather on a virtual Google hangout and drink beers.

“None of them wants to talk. Nobody wants to be on the call. Everybody wants to kill themselves. And it’s the worst experience ever. You can’t just force that shit, right? You have to have a real connection.”

One thing they do differently at Jahnel Group is they create unique experiences for employees to bond and fast forward their relationship. Because there is no culture if people don’t actually know one another, if they aren’t friends.

The Benefits of a Buffet Culture

The other really big point of difference they have is that they’ve realised that not everyone wants the same thing. While there is a very intense culture at Jahnel Group, hanging late on a Friday night drinking beers with the boss isn’t something that’s going to appeal to a dad with young kids who wants to get home. But that shouldn’t mean those employees who don’t enjoy socialising with work colleagues should feel outcast because they’re not into the same things.

“Our culture is like a self-serve buffet. It’s here for the employees benefit. Everything we do is to try to make the experience for our employees better and have them feel more connected. But not everybody wants all of this stuff.”

You can lean into it, you can pick and choose what you want to take part in, you can leave it well alone if you don’t want any of it. That’s not going to be held against you. Whatever you choose, you’re going to be supported by the leadership team, because that’s how you make employees feel happy and connected in their jobs – by giving them what they want.

“However you want to play it is how we want to set it up. Right. And so some people have chosen to come back two days a week, some people are back all five, some people are staying at home, so each to their own. And we try to respect that as much as we can.”

“We started to get nervous as we broke through about 40 people, maybe 40-50 people, it was getting a little bit much for my brother and I, having that personal connection with everybody every week.”

While they have a no a-hole policy, says Darrin, being a software consulting company they could easily become overwhelmed by introverts, and if you have too high a ratio of these types of people, it can hurt the culture. So when they hire, they ensure that every third person, so one third of the company, is an extrovert, someone who can drive the culture. Someone who’s happy to go on a road trip, who’s energetic and outgoing, who has a great personality, and makes everyone feel like they’re having a good time just by their sheer presence.

“And we have nothing to do with that. As leaders, we let the culture run. And it’s been really cool that as we’ve scaled, I think the culture is actually getting stronger.”

When the organisation was pre-80 people, the company ran on a five person executive team. But it started to very quickly get overwhelming, not everyone was able to do a great job, and things were starting to run away from them.

“We formalised that, we did a big executive off-site retreat, and we officially anointed people and encouraged them to take the lead. And we’ve really spread out the leadership across this 12-person team.”

And now, as the company is set to grow again, they’ve already got another five people lined up to join the leadership team.

One other thing that they do differently, says Darrin, is they don’t just celebrate people’s wins, they go all out recognising and celebrating them. From recreating the Hall of Fame and spending $1,000 on a bronze plaque of an employee’s face, to hunting down someone’s old guitar.

If Darrin can leave readers with one message, it’s this – go find the best person on your team, the person who if they leave you’ll be high and dry. Find out what they want and then go get it for them. Be creative, don’t just give them money, be thoughtful and show them how much you care, how much you love them.

“If you’ve got people who really care, [the culture] starts taking care of itself. Here’s the thing that I say all the time, when people are saying, ‘my team won’t come back to the office’: the commute is the tax that your culture has to pay.”

Dominic Monkhouse is a proven architect of business growth with a demonstrable track record. As managing director, he scaled two UK technology companies from zero revenue to £30 million in five years. Since 2014, Dominic has worked as a CEO and executive team coach, helping ambitious CEOs and their leadership teams reach their full potential and achieve sustainable growth. He is the host of “The Melting Pot with Dominic Monkhouse” where he talks with some extraordinary thought leaders, fellow business authors, and CEOs to absorb their wisdom. Dominic is the author of F**K PLAN B: How to scale your technology business faster and achieve plan A, an exciting blueprint for cultural change and business transformation.