Scratch Your Own Itch

Scratch Your Own Itch 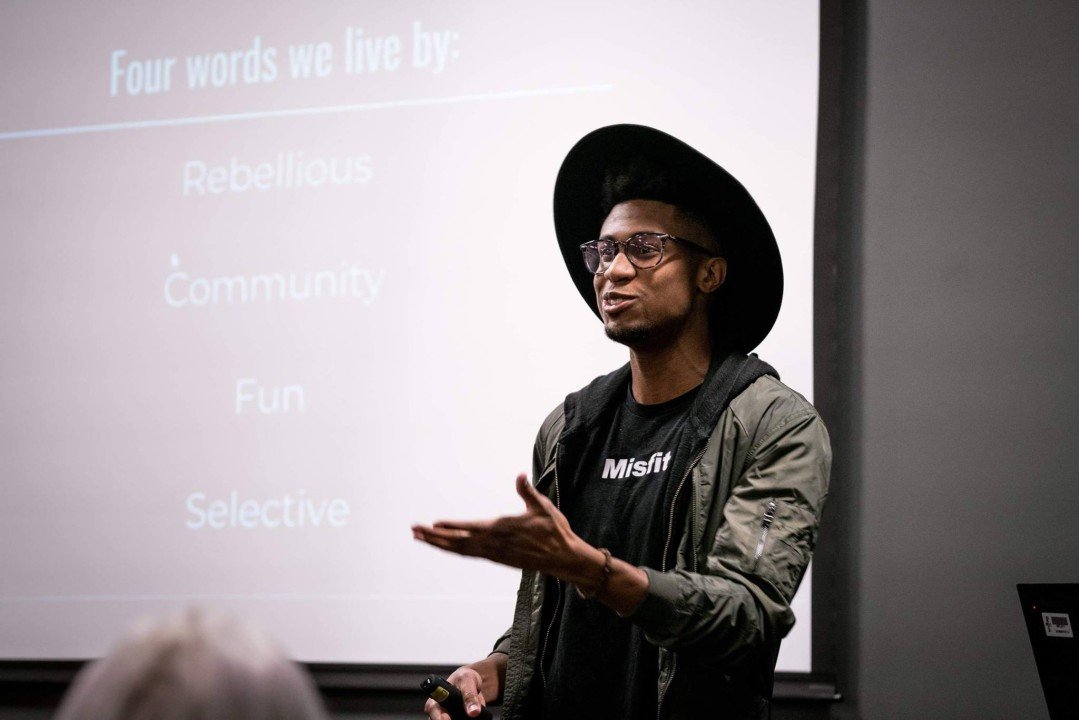 As a creator, being around “greatness” all the time has had an incredible effect on me as well.

I’m more grateful. More creative. And I have this desire to get back to my roots and test random things in this newsletter and report on my findings. There are a few things that I want to talk about in this edition of Dear Strange People. Scratching your own itch, learnings from my new community, and creative identity.

Scratching Your Own Itch

Stupid Deep, my podcast, was something I wanted to do after I decided to back away from my old company podcast. I felt that I wasn’t pushing myself as a storyteller and I was unable to dive into the things that I wanted to. I then went on an audio journey. Listened to hundreds of shows and couldn’t find what I was looking for. So I decided to create it. And it’s still not there… not even close. But I’m making progress.

When I launched the show there was a lot of praise. I’ve had a few people message me privately to ask if they could steal my format — which is fine by me. But, it is the constructive feedback that I have paid more attention to. Here’s why:

I had an idea that I NEEDED to put out into the world. The results didn’t matter to me. I just wanted to do it for myself. To explore a new medium and to get better at telling stories. It’s something that I would want to consume. And because of that, I want to improve. As quickly as I can.

It’s gotten to the point where I'm doing things like closing my eyes while watching a TV show, or movie, and only taking in the audio. Do I still get in the information I need to understand the story? What am I noticing that I hadn’t before? Is there anything missing? Audio and stories have become an obsession. And when something is truly an obsession the illusion of being good at that something doesn’t matter. You just care about the process & real improvement.

If you’re starting a podcast, show, or any other type of content… there seems to be this common narrative that we have to solve global problems on our first try. Or we have to step on the scene and be the greatest, hottest, new thing right away. Sometimes the best place to start is to just solve your own problem or create what’s missing that you would want to consume. Start there. And see where it takes you.

My latest podcast episode was with Erin Ashley Simon. She is a co-owner of the esports organization XSET, a producer, journalist, and so much more - she also recently signed on with PUMA.

My podcast is forever a work in progress, but as of now I reflect on the episodes ‘mid episode.’ Pausing and interjecting as I deem necessary for the listener. Something that has always interested me about Erin is how quickly she made a name for herself in the esports industry. Listen to the full episode here.

I was watching a Jason Silva YouTube video this past weekend and a quote jumped out to me “we measure our self-worth by the last piece of art that we created.” I've often felt alone in many of my struggles, but the more that I've talked about them the more I've realized that I’m not alone. There have been many times where I feel terrible (mentally & sometimes physically) when I don’t create. Or when I create something that I consider to be “bad” suddenly everything that I did before doesn’t matter. Who I was before that creation doesn’t matter. All I’m able to see is what I just created.

I’m learning to release myself of that pressure. To just create. Working with Lewis has been so eye-opening for me for so many reasons. I’m building out the marketing department and learning so much at the same time. But also, seeing how one of the top business personal brands operates has shown me what I do & don’t want as a person.

I genuinely just want to create. That is what is most important to me. I don’t care how many people follow. Or how many people resonate with it. I want to get better at my craft and create. I don’t want to be bound by the pressures of “having to create something.” And this is new for me. I always thought I wanted to be someone like Gary Vaynerchuk… with a big company and a big personal brand. That's just not me anymore. At my core, all I really want is to wake up every day and enjoy my life. To be able to stare out the window and do nothing for as long as I want. To be challenged. To do meaningful work. And to work on my craft and create. This shift in what I want is something that I feared previously.

As weird as it sounds, my younger self feared that I would get to this point where I didn’t care about fame, or fortune, or recognition. And now that I’m here… it feels wicked. :)

I have been building a Discord Community of creators and professionals, it’s at about 100 members now. We do weekly calls and jam about content, personal branding, and anything else that pops up. It’s linked to my “pay what you want” Patreon account for anyone that wants to join.

At the end of last week’s call I asked a question about content. I'm typically not the one asking for help. We were already 45 minutes past the stop time, and everyone on the call helped me work through an idea that I had. Sometimes creators, and entrepreneurs, view their communities as a place where they have to bring the most value. Where they’re at the center of the community. Nothing wrong with that. But if built right community members often bring a lot of value to each other, and to the person that’s building it — you.

When I launched my first company I had no idea what I was doing. Literally. Not a clue. So I built a Facebook group of people that I could learn from. I shifted my efforts to Discord, but to this day I have gotten so much value and fulfillment out of my communities simply because I’m scratching my own itch.

I spent the majority of 2016-2020 building companies, growing personal brands, hosting events and helping brands tell powerful stories through video. Early 2021 I accepted a position with Greatness Media (School of Greatness, Lewis Howes, Etc.) leading the marketing team & that’s what I’m doing now! I'm also the host of the Stupid Deep podcast, a narrative show that explores the power of stories and how they shape us.

I was also one of the first video creators to use LinkedIn. Collectively my videos, thoughts, podcasts, and writing have been viewed over 10 million times across platforms. I spend most of my time (outside of my new day job) speaking, creating, running experiments, learning about everything video games/esports, and petting way too many dogs.

If you've read this far 1). thank you for reading my words! 2). How are you "scratching your own itch" right now?

Quentin is a Marketing Lead at Greatness Media. He is a TEDx speaker, podcaster, writer and esports geek. He owns IEEG, a storytelling company, and MKE Misfits a community & events company based out of Milwaukee. His team creates compelling visual stories, partner with brands to reach their target audience, consult on storytelling/branding, and host events around the globe. He was one of the first LinkedIn video storytellers & have since used the platform to accumulate millions of views and travel the world for speaking engagements. Quentin holds a Bachelor degree in Sociology from the Cardinal Stritch University.