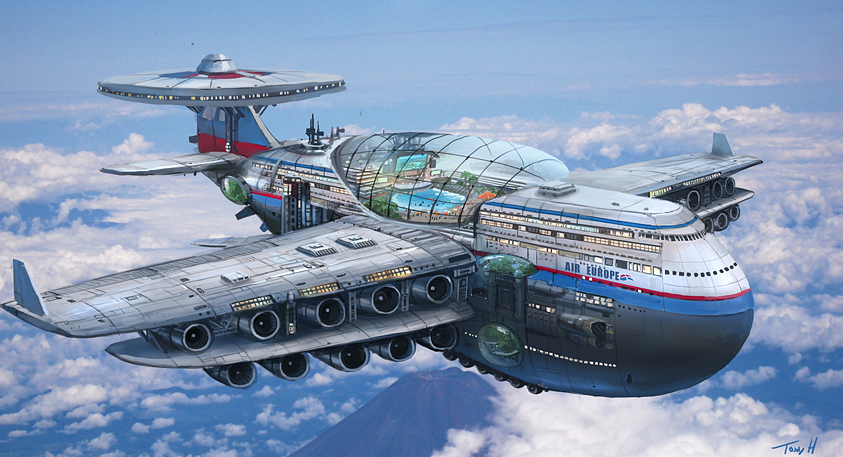 The Sky Cruise is powered by 20 nuclear engines and can accommodate 5000 passengers.

An outlandish concept for a nuclear-powered floating hotel has been unveiled.

The newly revealed Sky Cruise is a nuclear energy flying hotel created by Hashem Al-Ghaili, a Yemeni engineer and video producer who unveiled his vision for an artificial intelligence-driven aircraft capable of carrying up thousands of passengers, transforming the world of hospitality and aviation.

Sky Cruise is a gigantic hybrid between an airplane and a cruise ship, with nuclear propulsion.

Designed to run 24/7, Al-Ghaili even adds that running repairs would be carried out in-flight – a first in aviation.

Inspired by artist Tony Holmsten’s paintings, the initial concept of this aircraft was redesigned and animated by Hashem Al-Ghaili himself.

Although an artificial intelligence system will steer the Sky Cruise, a licensed human operator will be able to assume control at any time.

The project has many detractors, who question its viability due to aerodynamic and maintenance issues and wonder how such a giant could take off from the ground.

Another question to be answered is how much it would cost to travel on the Sky Cruise, something that could be within the reach of only a few.

Sky Cruise is inspired by the Titanic.

To create Sky Cruise, Al-Ghaili was inspired by a 3D model of the Russian designer Alexander Tujikov.

In turn, the Russian based the model of a futuristic cruise ship on an illustration created by Tony Holmsten for the game Killer is Dead. Al-Ghaili bought the rights to the model created by Tujikov and decided to develop a futuristic concept of a sky hotel on its basis.

The Sky Cruise is not only self-sufficient, but its flight is endless, as the reactor provides enough energy to fly for years.

It will take a few years for Sky Cruise to become a reality, but it is also exciting to think that this development is not science fiction.

The Sky Cruise project comes right after Amazon founder Jeff Bezos and his brother Mark made history by going to space in July 2021.