State of Our Graduates

State of Our Graduates

A year ago I wrote a piece about how the world is changing and what is happening to our students after graduation. Although the unemployment rate is at rock bottom rates, the fate of our higher education graduates isn’t getting that much better.

The median earnings for people with a Bachelors degree is almost $60,000 ($59,124) which is much higher than someone with only a high school diploma which is just over $25,000. This is the headline figure that is used by pretty well every university marketing department in the world. This is a huge difference – just over twice as much for a university degree, which can become a serious amount of cash over the span of a lifetime.

The figures speak for themselves, until we look a bit closer.

Something happened after the great recession. Something changed. Something is still changing. And if we look ahead, more and more is changing.

$60,00 a year is pretty good – if you can find a job. But wait a minute, $60,000 is a number that includes anyone who is working, no matter how old, who has a Bachelors degree. If we look at the numbers that come from the College Scorecard (Treasury) put out by the Dept. of Education, we see that the income for graduates from the past ten years isn't doing that well. Of course, this is to be expected – they are at the beginning of their careers. So, how good should they be doing? How good are they actually doing?

I know that the problem of un- and underemployment is there, but how big is it? What we have is that 22% of the college and university graduates over the past ten years are making less than $25,000 per year (high school range). Add to that the 18% who are making between $25,000 and $30,000 and you have a lot of underemployment. So, we have 40% of our graduates from the last 10 years making less than $30,000 and 22% unemployed. This means that there are a lot (62%) of our graduates either under or unemployed.

I have heard about how lazy this generation is and how they are all taking basket weaving degrees, but that is a lie. I work with these young adults. Most of them work hard. They do exactly what is expected of them to graduate. They work as hard as we ask them to. They have done exactly what we said that they should do to live happily ever after – go to university, get a good job, and it will all work out.

They’ve done what we asked and now 39% of them (20 – 34 year olds) have moved back home, many with young families, to live in their parent’s basements. This is the highest rate since the middle of the great depression almost 80 years ago. I'm sure that most of these "nest returns" spent their teenage evenings dreaming about moving back in with their parents.

We are at the beginning of one of the greatest upheavals in recent history, and we aren’t dealing with it very well yet. Blaming these young people for their predicament is like blaming the farm workers who had to leave the farms 100 to 150 years ago. They never asked for the societal upheavals that destroyed their lives just like our children aren't asking for what is happening to them today.

There is still great value in learning – personal, societal, and economic. There is just no value in an educational establishment that is obsessed with the trivial pursuit game of research that is now being played out while using students to provide the funding. Add to that, these institutions are preparing students for careers that have already, are presently, or will (at alarming rates) be disappearing. We are preparing them at our convenience, making sure that they have the time of their lives (student experience), and sending them out with hollow and useless qualifications. And STEM (underemployment better ranging from between 15% and 38%) - what about the automation of code writing that is emerging? Of course, your job is invaluable and won't be effected as the table from Heather McGowan's recent article demonstrates. 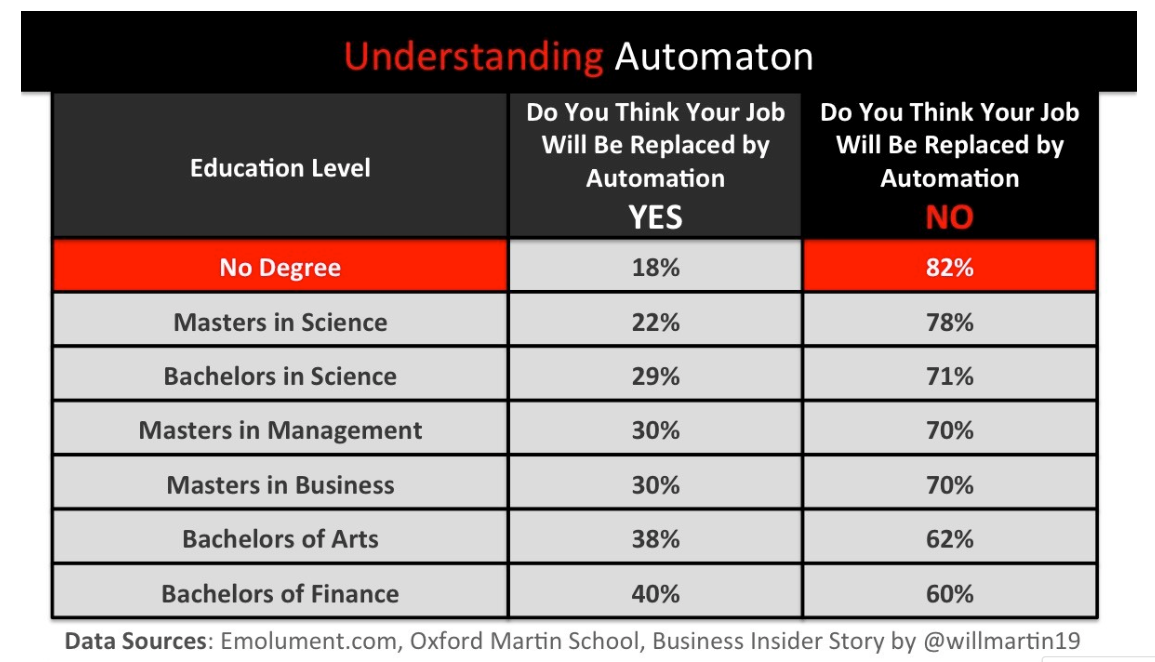 And, before the chorus of “in our country it is different”, maybe you should look at the rate of automation. Where automation is highest, the pain is the most acute. And – if you want to start on the “our University is much better than that” save it for the 17 year olds that you are grooming for your autumn intake.