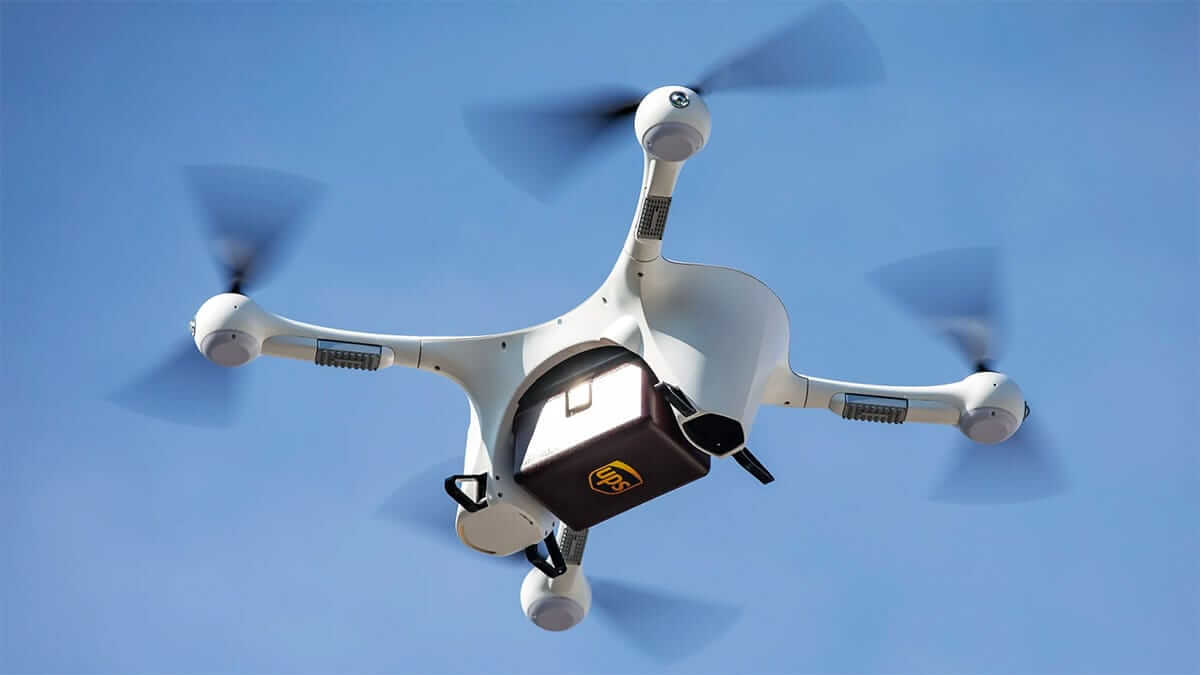 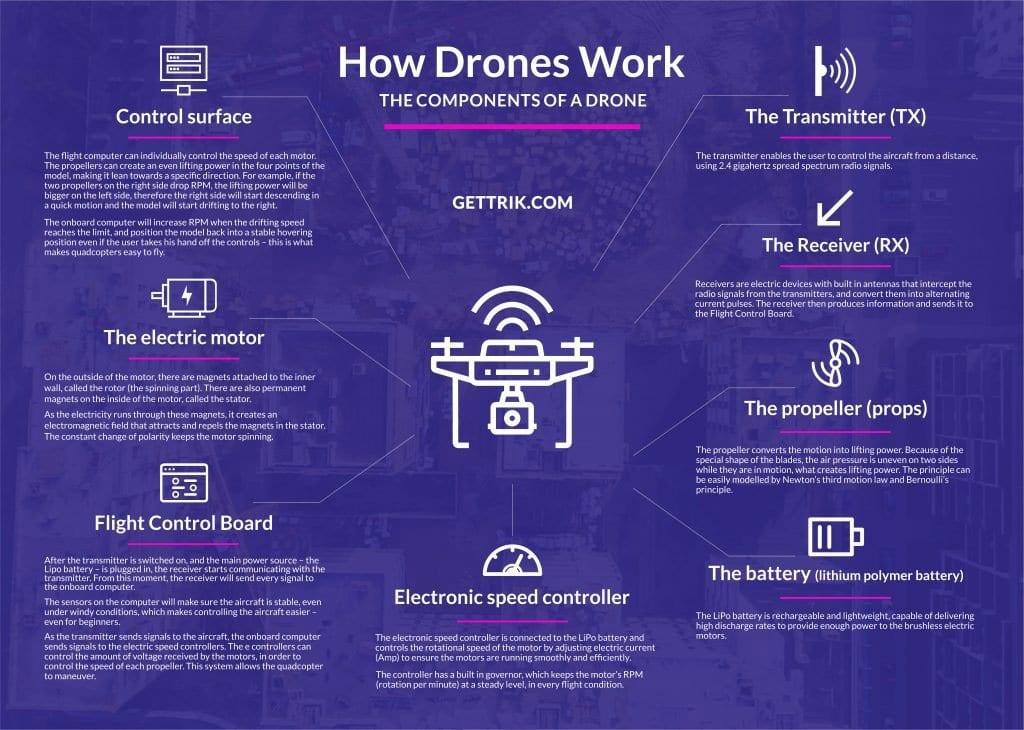 Up in the sky, look - it’s a bird. It’s a plane. No - it’s a drone! Drones are gaining increasing popularity across the world, mainly among drone and technology enthusiasts. However, sophisticated drones using different types of sensors and artificial intelligence are also adding value to different industries and occupations and making lives easier for both businesses and customers. Following are five industries that drones are revolutionizing: 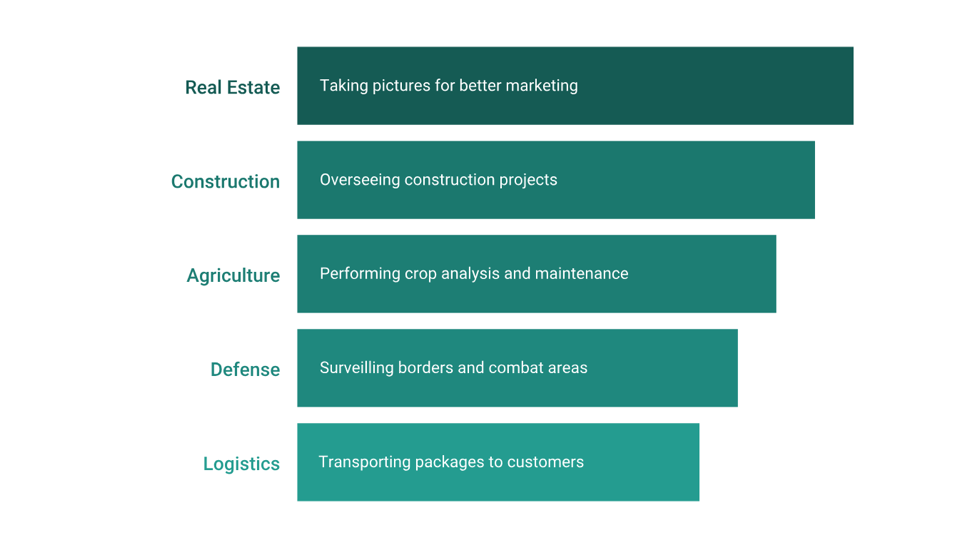 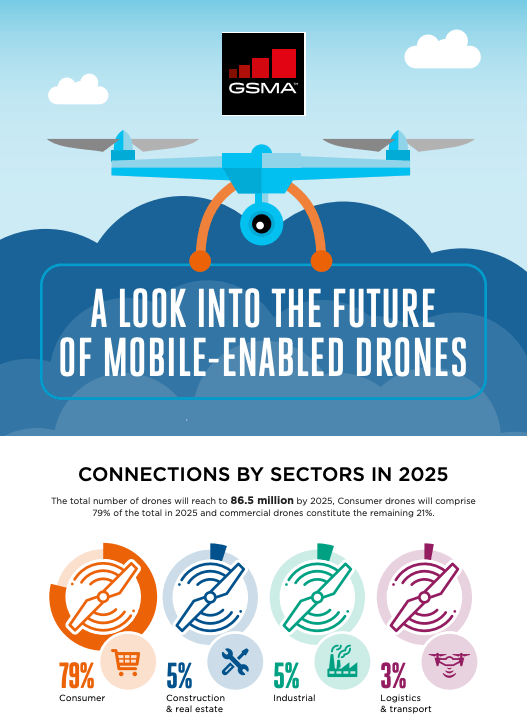 Drones fitted with cameras can be used to photograph real estate properties to give prospective buyers a clearer picture of what they are buying and help them to make more informed decisions. An aerial view of houses or empty lands can enable potential home buyers to learn more about the layout, locality, connectivity, and privacy due to the isolation of the property. This can be especially useful for real estate companies for marketing by means of capturing images of large properties, which cannot be presented well through images taken from the ground, and using them to pitch properties to customers. 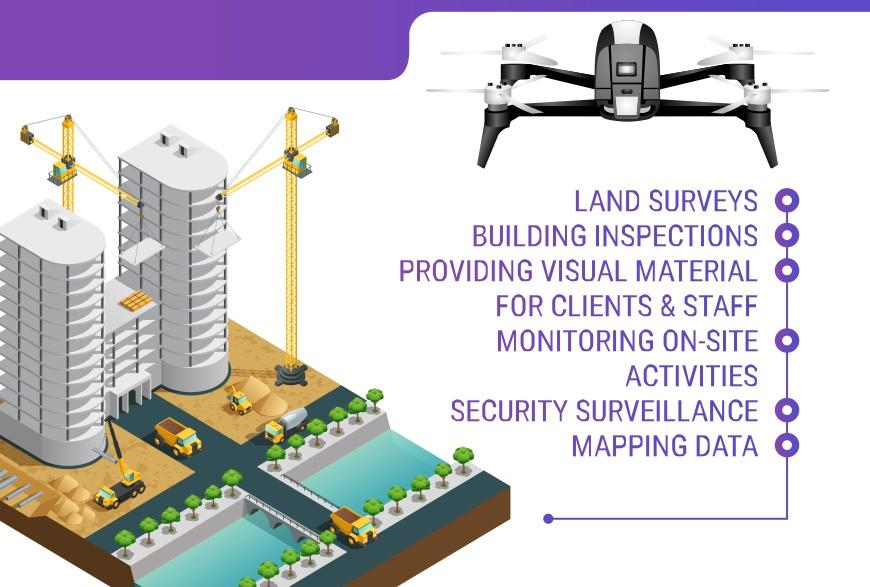 Construction projects that span across large areas are hard to inspect manually, even with the use of vehicles, which may be obtrusive to the operations, while not giving a clear perspective. Drones can provide aerial monitoring of construction projects to track progress and also to ensure the security of materials and assets. Drones can also be used for more advanced applications, like performing pre-construction site surveys, and help with planning and layout designs. Drones can be provided with advanced imaging capabilities, using deep learning, to enable them to accurately collect site information for not only planning but also legal purposes. 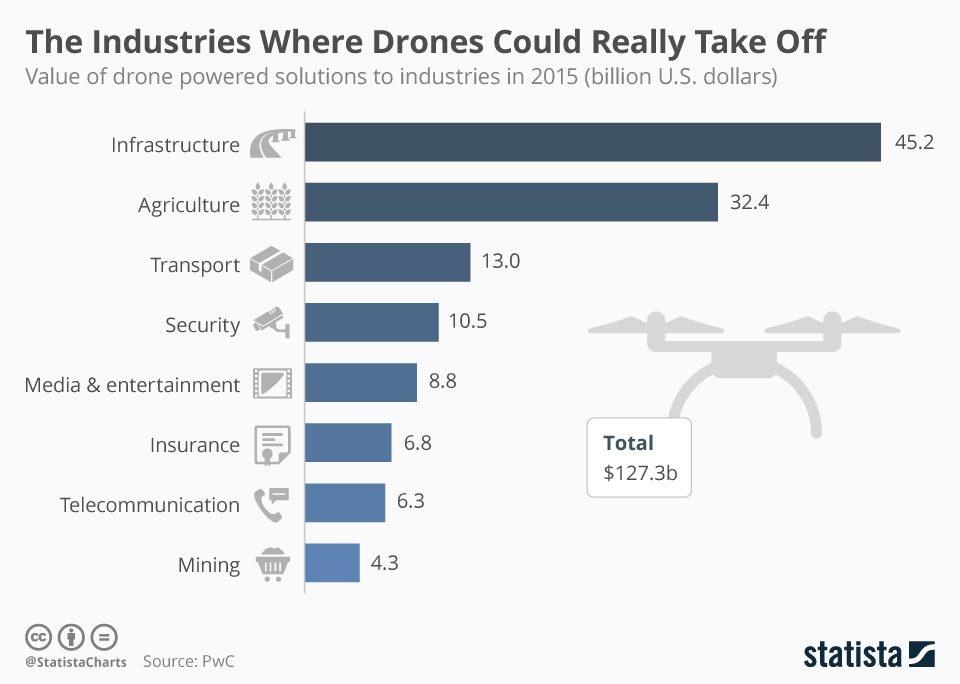 Agricultural drones, although currently not very prevalent, are steadily growing in application across various parts of the world. Drones are assisting farmers in maintaining crop health through real-time monitoring of the crop and the land. These drones can not only sense any deviation in crop health but can also fix these changes and ensure high crop quality. Furthermore, agricultural drones can perform activities like seed planting, fertilizer application, weather analysis, and watering, saving both time and effort for farmers. 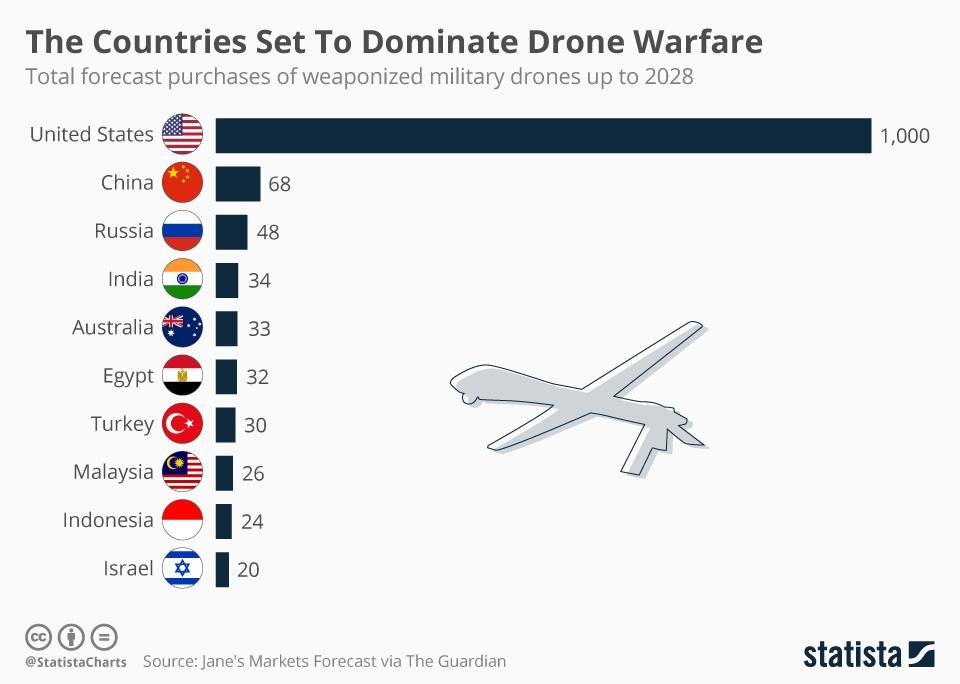 The military has been among the most enthusiastic adopters of drone technology. Unmanned Aerial Vehicles (UAV), which are capable of performing pre-programmed surveillance, as well as, attack missions with minimal human intervention, have been around for at least a decade now. Military drones are among the most sophisticated and functional drones around,and can perform complicated missions such as aerial surveillance, supporting ground troops in combat, patrolling long borders, supplying resources, performing search and rescue, and search and destroy missions. Modern drones, driven by artificial intelligence, are highly adept at identifying threats and stopping them promptly. AI drones are potentially the future of defense and warfare. 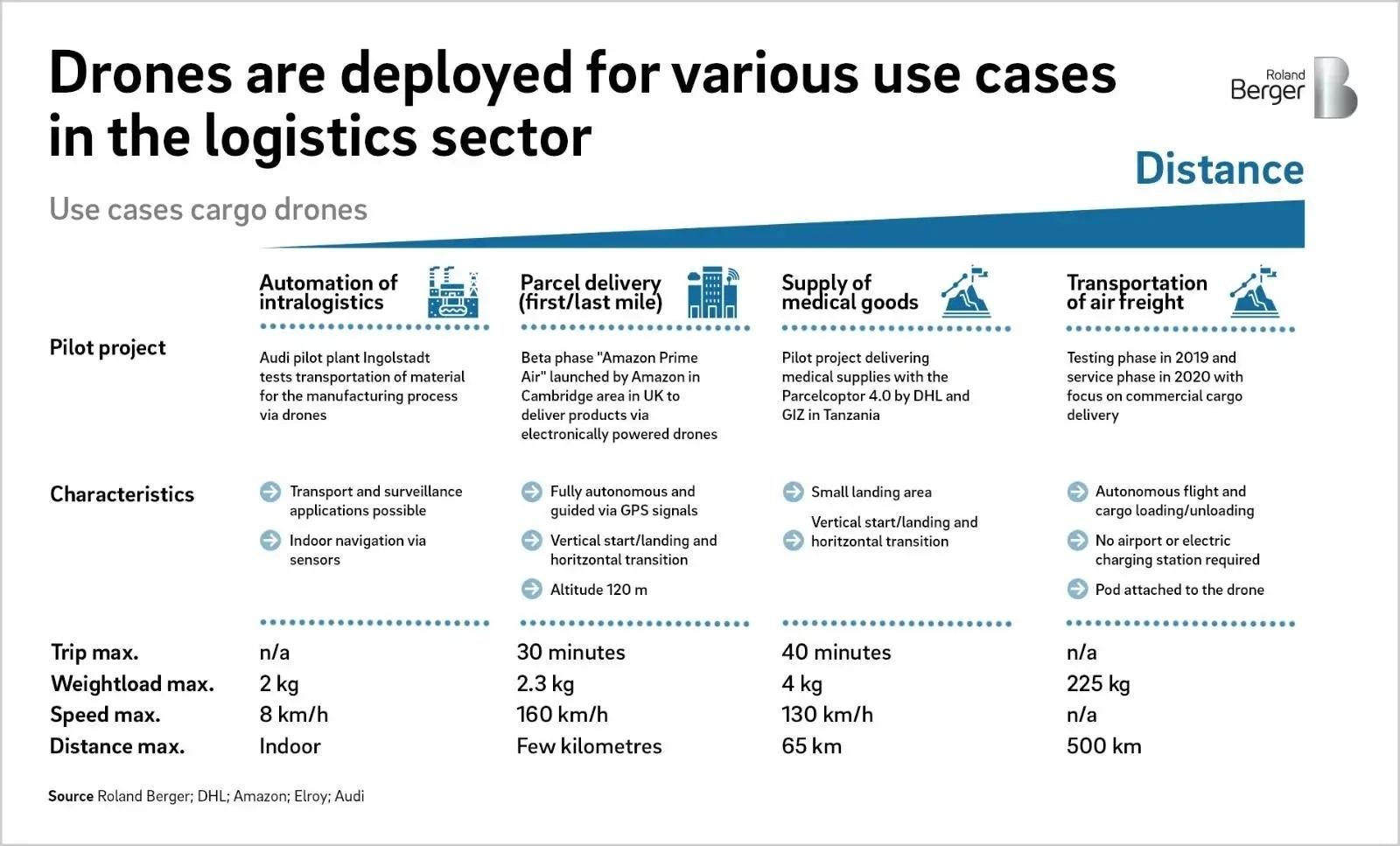 Drones can make a significant impact in the logistics industry by drastically minimizing the delivery time. Drones can deliver small packages aerially, which means they won’t have to take numerous turns and face diversions along the way to their destination. Drones can take the shortest route to any delivery location and deliver packages in minutes, instead of hours. These drones can use a customer’s mobile phone to track them via GPS and deliver packages after verifying their identities, either through their phones or through real-time image capturing, and scanning.

While these are currently the industries that drones are revolutionizing in, any function that requires autonomous oversight and transportation can be delegated to drones. However, mainstream adoption of drones is still a thing of the future, with a few challenges that need addressing. Improving the robustness and performance of drones, and establishing regulations, should be the first steps towards making drones a standard practice for industries.