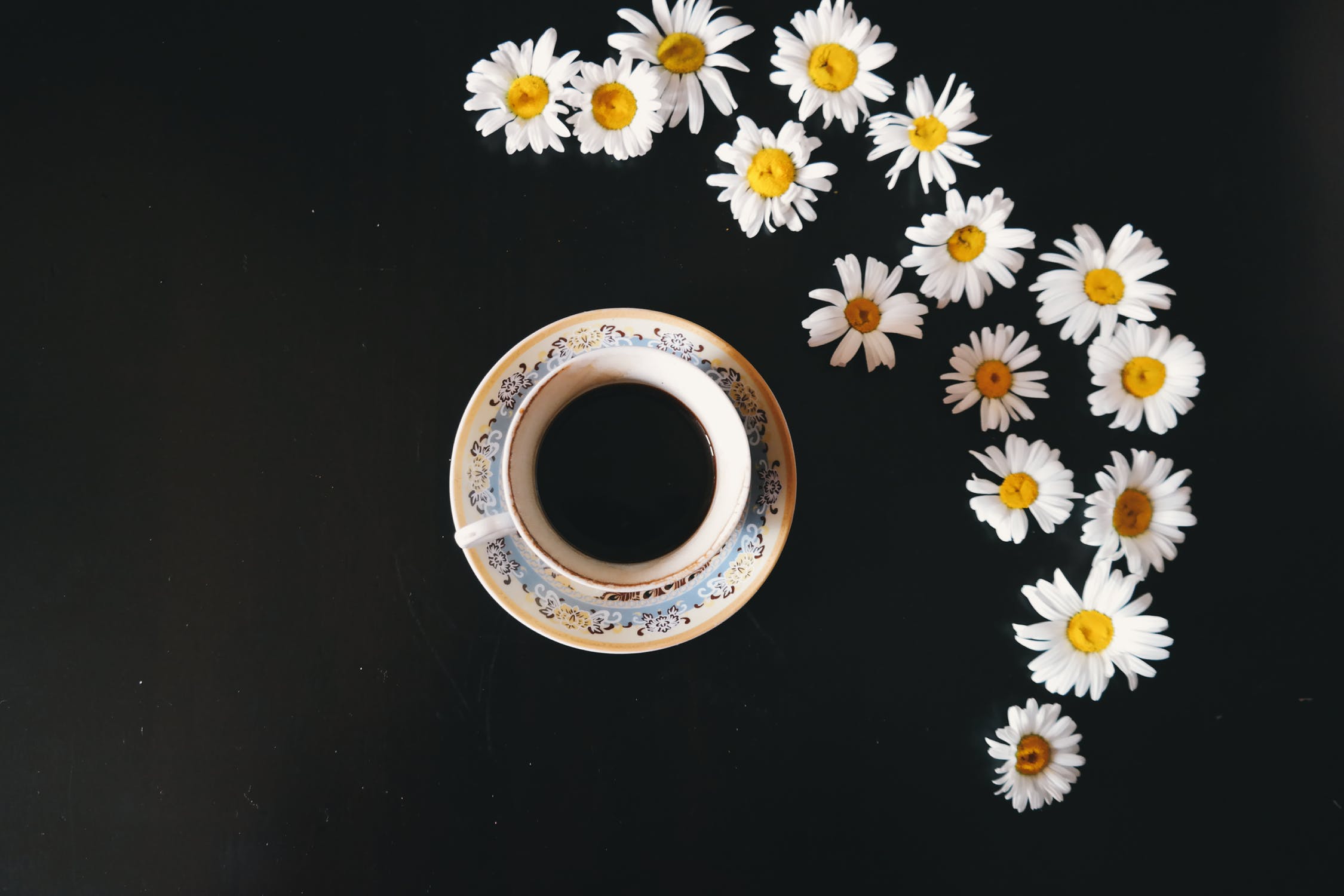 After much anticipation, the GST Council has failed to deliver a final verdict on GST applicable on real estate – but how much would it really have mattered?

Here’s a Utopian vision – the government would announce a GST rate cut, homebuyers would cheer up since prices would reduce marginally, and the market revives. Really?

The biggest paradox in Indian real estate is that numbers suggest a massive burden of unsold housing stock in the midst of a chronic shortage of housing. As long as prices don’t reduce significantly, the housing shortage will only widen regardless of tax sops.

What we have today is a nation of aspiring homebuyers, many of which are perpetually on the fence, waiting for a slew of minor policy windfalls to cumulatively make a home purchase feasible and attractive.

Most cities saw some sales growth in 2018, but the market cannot revive on consistently slow growth – it needs a decisive accelerator. Would a GST rate cut have been such an accelerator, or does the market need a lot more than that?

Certainly, GST on under-construction properties was a severe hurdle in 2018, and the possibility of a possible GST rate cut in late December literally froze property buying decisions for many. Regardless of how much or how little such a rate cut will actually do to revive the market, all stakeholders – from industry players to buyers – hoped for it with bated breath.

It bears remembering that the modest growth numbers we witnessed last year were significantly led by sales of ready-to-move properties – not only because they are exempt from GST, but because incessant project delays have taught buyers to be wary of under-construction projects.

In the absence of input tax credit (ITC), developers invariably pass on the additional construction cost to their tenant businesses by way of increased rentals, over and above the charges that the latter pays as GST on the rental value.

This spikes up the overall rental cost for corporates leasing spaces across the country. Given that Indian commercial real estate kept the sectors growth numbers ticking during the prolonged slump, it was largely anticipated that to boost its growth further, the Government would have given ITC benefits along with a possible rate cut.

However, back to residential. Let’s examine the actual savings that a possible GST rate cut would have actually implied for those who decided on under-construction residential properties.

Flat Rate Minus ITC Benefits Only Some Buyers

Replacing GST with the erstwhile service tax already caused considerable financial damage to serious buyers as they were taxed at 12% as opposed to the more moderate twin taxes (service tax and VAT) earlier. Despite a provision for receiving ITC on GST, buyers never really had a clear understanding about how and when it would be credited.

Though the Government directed builders pass on the ITC benefit to buyers – especially in the case of affordable homes - the ambiguity around the intent and delivery of this benefit prevails to the present day. This clearly indicates that a decision favouring a flat GST rate without ITC to benefit buyers makes a lot more sense. 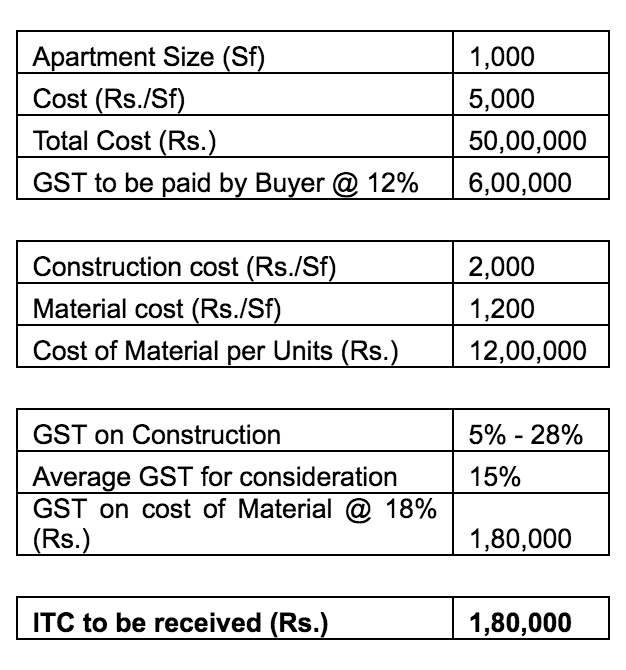 When we talk of uncertainty of the ITC benefit, we are talking about uncertainty over an amount of Rs. 1,80,000 on a product value of Rs. 50,00,000 - approximately 3.6%. This is doubtlessly a significant amount for most Indian homebuyers. Unfortunately, buyers were - and remain - oblivious to the fact that they are eligible to this benefit if builders passed it on to them.

Clearly, a flat 5% rate of GST on under-construction homes without the ITC would provide an indubitable and transparent benefit to buyers. The only feasible scenarios are:

Either of these two options would be added incentives to buy under-construction properties.

The other alternative was to fix the GST rate with ITC at 12% of the cost of the property (effectively lowering GST to 8% once the input cost is accounted for and reduced). Buyers would benefit from a lower tax, but be no wiser about what exactly they are entitled to under ITC - and how they will get it.

The popular assumption was that a flat GST rate cut would have boosted the entire residential sector. However, there was a high possibility that it could deliver a major setback to the affordable housing segment. In fact, lower GST rates minus ITC could increase the prices of budget homes. Currently, affordable homes are taxed at 8% of the total cost, including the nebulous benefit of ITC.

A closer look at how costs could have varied post the new rate: 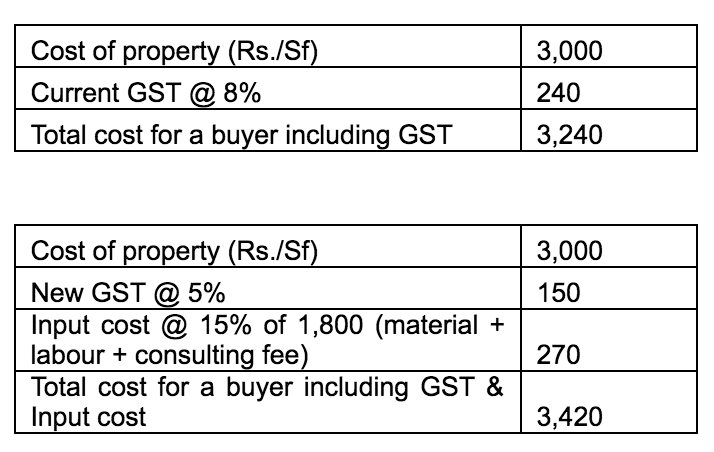 Thus, prices under the new flat GST rate of 5% would have increased by Rs. 180/- per square foot for lower budget homes.

In 2018, there was a perceptible increase in site visits and buyers actively scouting for options at the best deal. Negotiations were getting increasingly interesting and meticulous as the parties debated out the costs and discounts to arrive at mutually acceptable figures. A final decision on the GST rate and clarity or the abolition of the ITC could have triggered demand, but would it really have helped close transactions?

Thus, we may need to look beyond minimal tax sops and consider whether they actually make homes affordable and catalyse sales. Perhaps, instead of constantly looking for tax sops, we need to question the very fundamental of pricing in real estate.