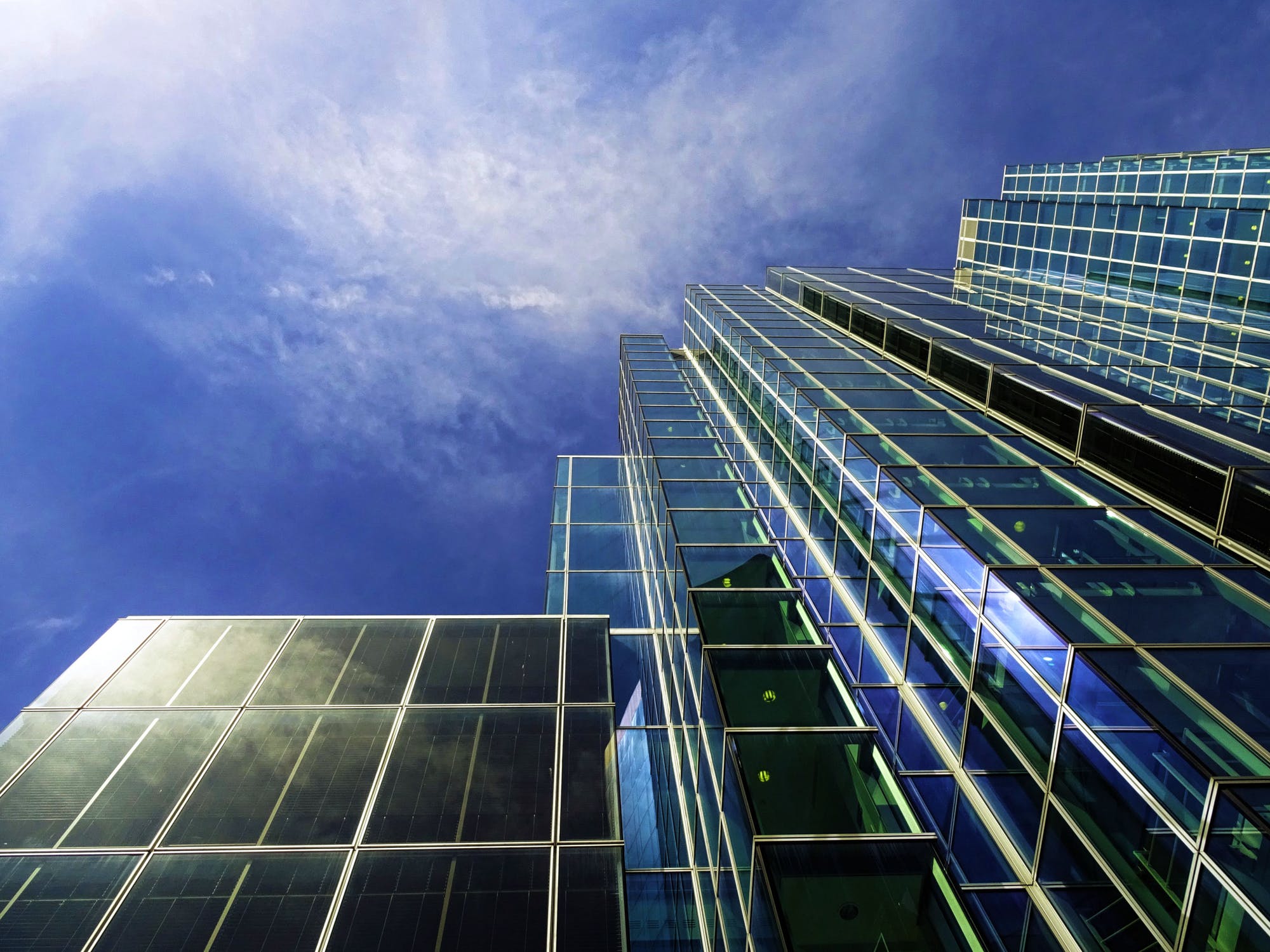 It’s no secret that emerging markets (EM) are in a bit of a rough patch. While the unfortunate events in Turkey garnered most of the attention initially, nearly anything related to EM has slid in value. What exactly is going on here? Is this just another acute crisis making its way through the lesser developed regions of the world again? Or have other signals emerged to suggest there to be a larger issue at play? Given the is-ought approach we take on this site, it’s worth digging into some more. After all, a better grasp of what this market driver is—if anything—should better inform us for how we ought to position our portfolios.

While it’s impossible to know with certainty the causes of any given market move, we can nonetheless try to piece together the puzzle. Markets paint like Monet after all; sometimes it’s possible to make out the bigger picture, even if just for a fleeting moment. This may very well be one of those rare occasions.

With the preamble now stated, let’s dig in! Remember though, I’m just a macro-minded novice, so please keep that in mind when reading the following narrative.

I believe that the weakness in EM-related investment markets is indicative of a macro-driven, risk-off move into the U.S. dollar taking place. For all of its faults, the U.S. dollar remains a favored vehicle for expressing a cautious view. There’s a consistency, in my opinion, in how various commodities, currencies (FX), equities and rates have behaved to suggest this. I will lay out my case in the following charts.

Since April, the U.S. dollar index and S&P 500 have been on a meteoric rise. To be sure, U.S. economic data has been robust, so no surprise there, right? Typically, strong fundamental growth is accompanied by an increase in inflation expectations. Future prices are expected to rise to reflect and balance the growing demand. However, just the opposite has occurred; inflation expectations have fallen. Are market participants positioning for a deflationary move instead?

Similarly, commodities usually perform well during periods of economic expansion. While not infallible, Dr. Copper is a popular investment meme. However, the asset class is also a favored vehicle for expressing a view on the U.S. dollar, displaying strong negative correlations at times. As shown below, commodity performance has been both weak and broad-based since April, falling in concert with the U.S. dollar’s appreciation. I see this consistency as evidence of a currency trade. Energy (primarily oil) has, however, been an exception. While potentially indicative of a thesis flaw, there are also plausible idiosyncratic reasons for this divergence including production declines in Venezuela and political sanctions on Iran. 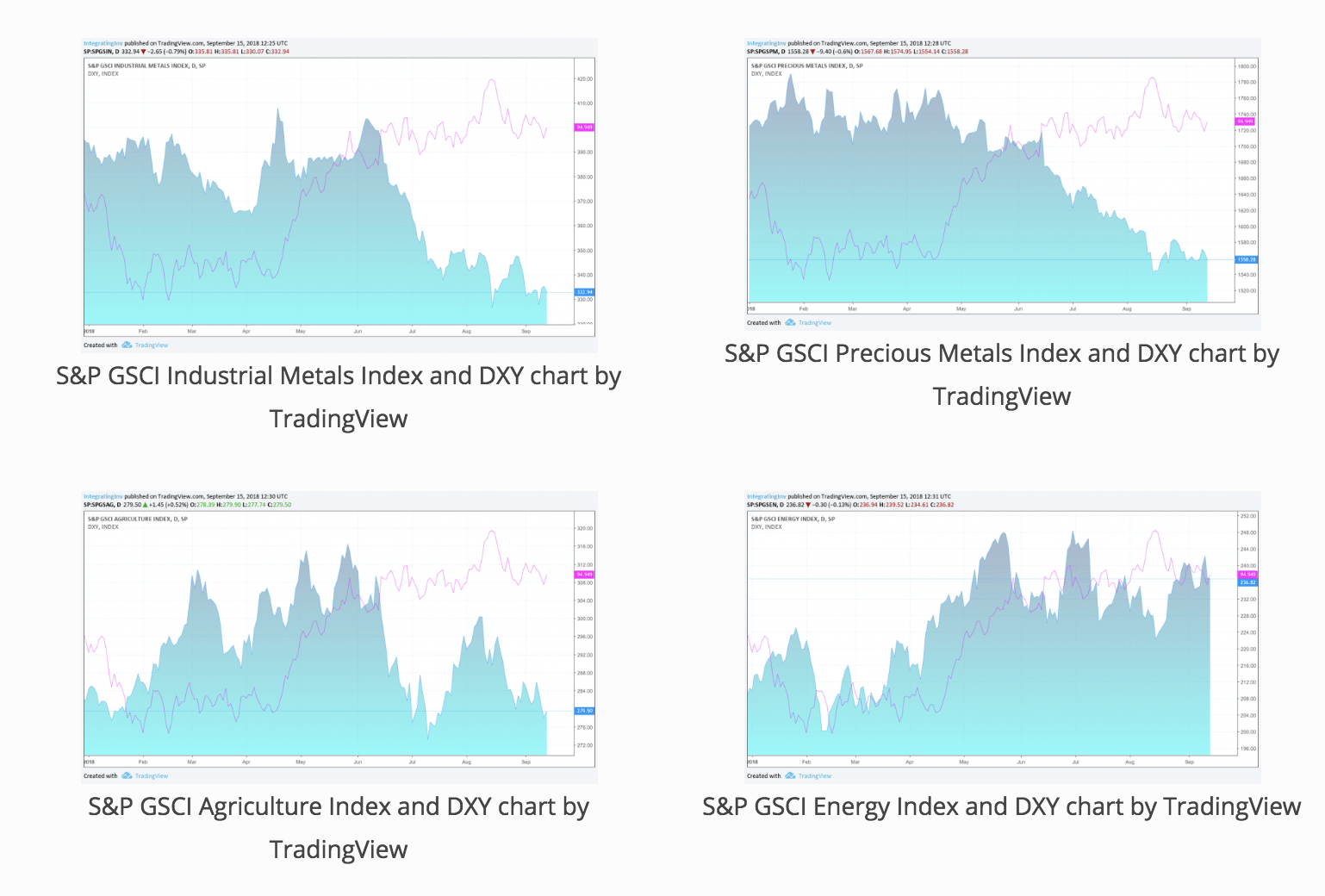 Next we can observe that currencies across all EMs have been weak. Surely such occurrences are expected for the “basket cases”, but even economies exhibiting strong growth (such as India) are losing exchange rate value. There appears to be a general move out of EM markets and not just those facing idiosyncratic issues (like Turkey). That said, we do have an outlier in the Mexican peso. However, it did initially fall in April in concert with the rest of the group before recovering in June, possibly reflecting the positive NAFTA resolution. 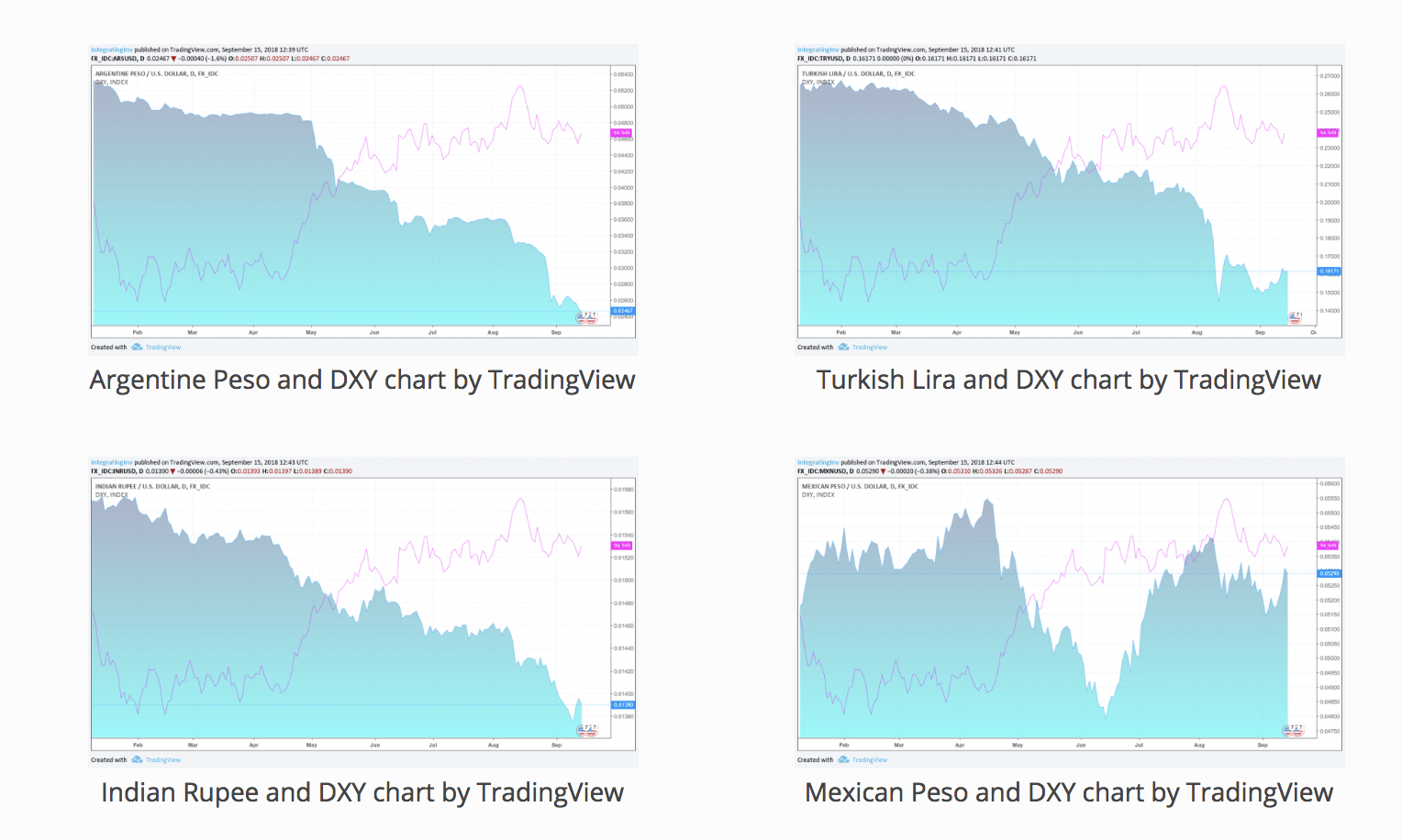 As noted, U.S. stock market performance has been strong, recently making all-time highs. This is hardly consistent with risk-off sentiment. While true, this also occurred during a time of unprecedented momentum divergence between U.S. and European/Asian stocks. This could be indicative, in my view, of a flight to quality within equities to the deeper, more liquid U.S. market. Furthermore, the internal breadth of U.S. stock markets has been weak, with fewer companies participating in the rise—another potential clue that momentum, rather than thoughtful stock-picking is behind the move. Investors appear to be betting on (against) the leaders (losers) (or possibly indices) and not on the rising tide of economic growth. 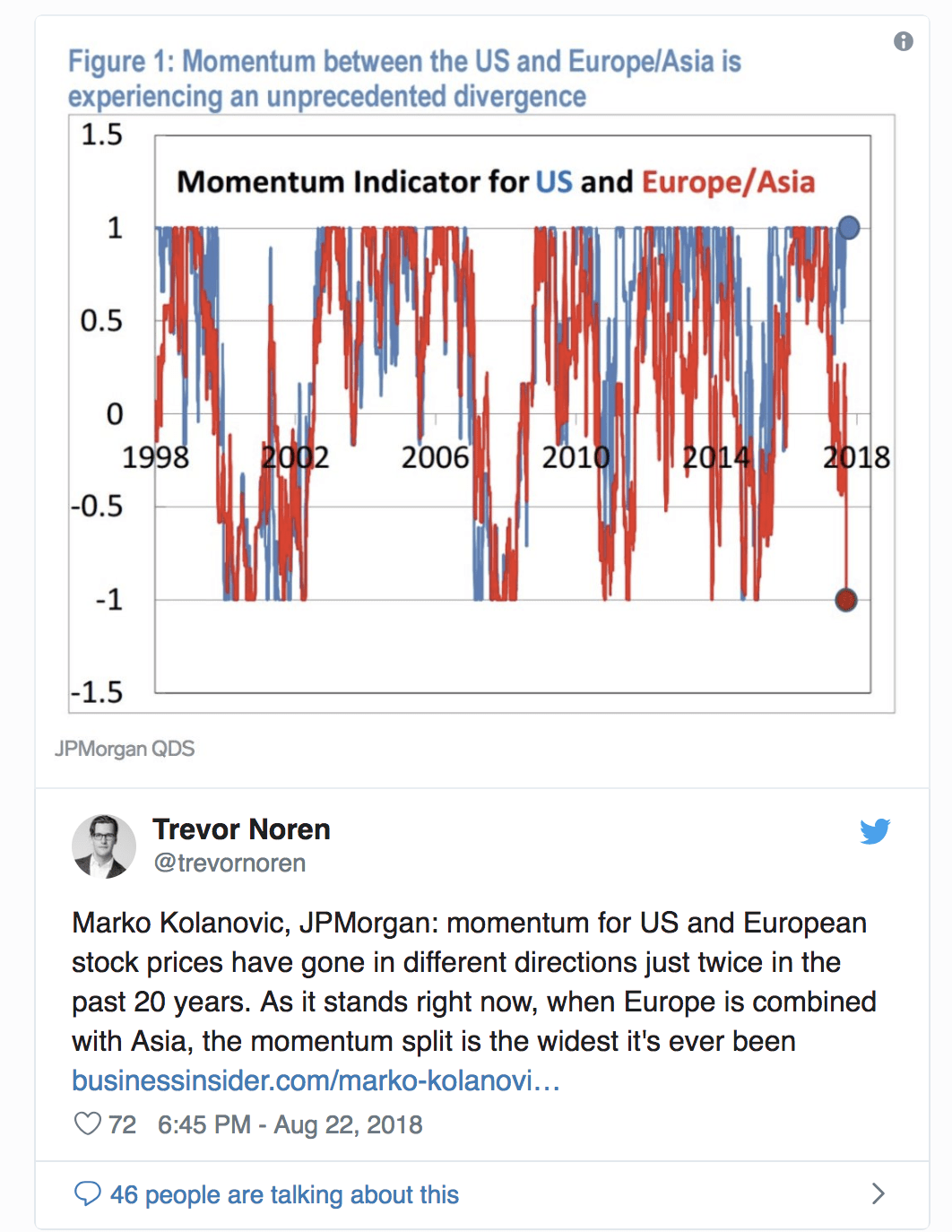 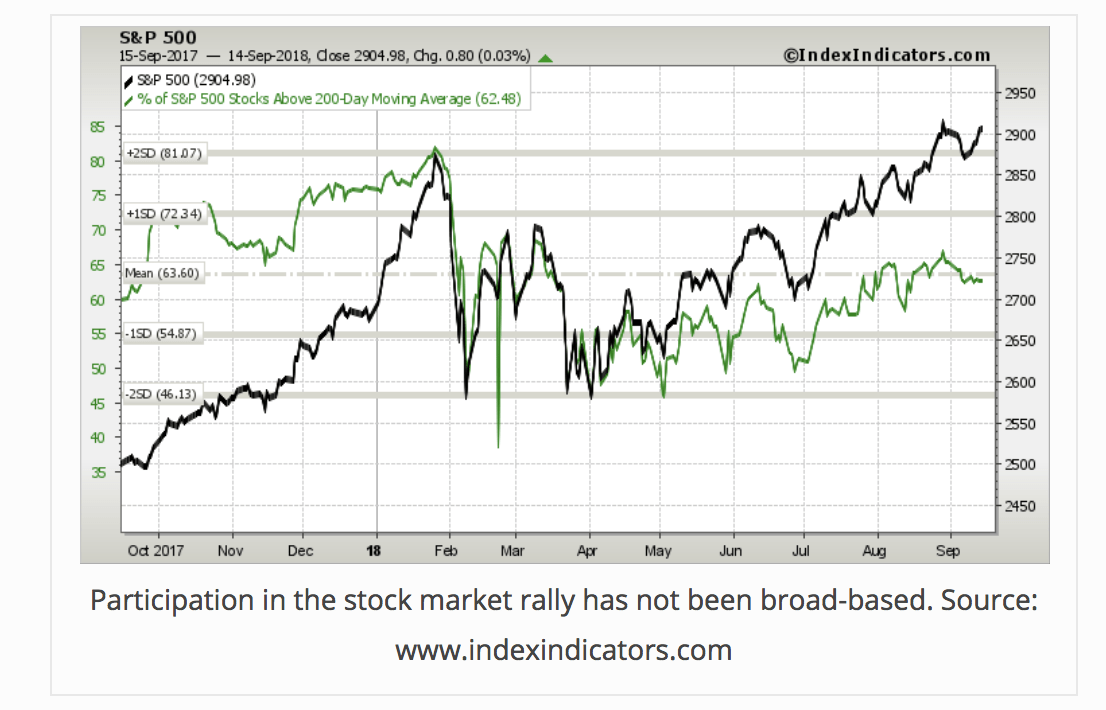 EM is also an exception when it comes to the volatility landscape, standing out in an otherwise (green) sea of tranquility. The abnormally low levels of volatility in the post-financial crisis period have been well documented; however, the past two years are outliers among outliers. As shown below, it is rare for developed markets to exhibit such uniformly low levels of volatility. Might this be indicative of capital flowing to the safer parts of the capital markets?

Rate volatility has also been particularly low, not only on an absolute basis, but also relative to the VIX, FX volatility, oil price volatility, and gold price volatility. This could suggest that the safest of safe haven assets (i.e. U.S. treasury bonds) are well bid, a hallmark of risk-adverse behavior. 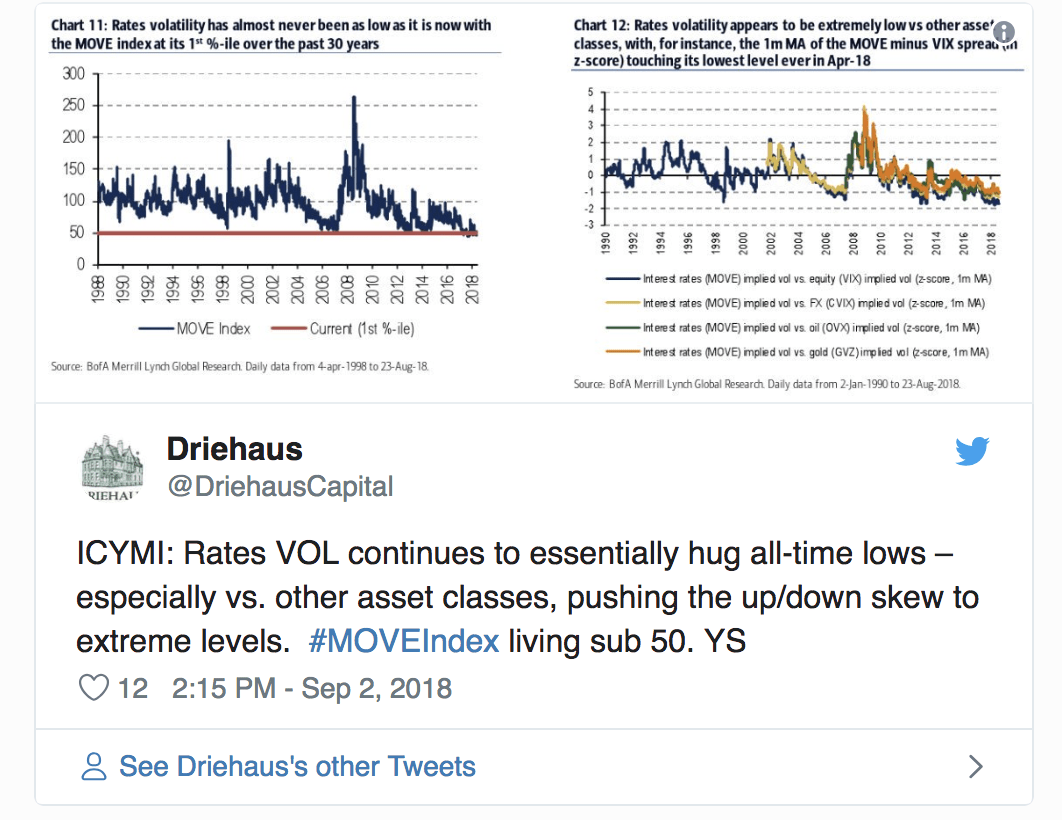 And of course there’s the flattening yield curve which has served as a reliable recession signal in recent history. Though it has yet to invert, the direction is suggestive.

To be sure, none of these charts in isolation can serve as sufficient evidence for such a hypothesis. However, taken in concert, I believe the case is strengthened for the occurrence of a risk-off move into the U.S. dollar. The data all seems to be painting a similar picture.

Even if our observations eventually prove to be valid, the causes remain unidentified. It’s no surprise that a strong U.S. dollar can create turmoil in EM investment markets. There are a variety of reasons for this. Most notably, foreign companies and governments commonly borrow using U.S. dollar denominated debt (due to the depth of U.S. capital markets) yet hold assets and receive cash flows in their local currencies. This can create a mismatch and financial strain during times of FX fluctuation. There can be other reasons as well, such as declines in commodity values which might serve as the backbone of a country’s economic activity.

But to me, there appears to be more of a macro trend underlying today’s markets. If so, we should probably search for a macro explanation. Two of the more interesting hypotheses I’ve come across are Brent Johnson’s so called “dollar milkshake theory” (DMT) and Jeffrey Snider’s view of a dollar short squeeze occurring.

Mr. Johnson’s belief is that since: 1) the Federal Reserve (the Fed) is the only major central bank draining liquidity via Quantitative Tightening (QT), and; 2) capital markets are interconnected and global in nature, that QT might attract capital flows to U.S. dollar denominated assets. As a result, he expects to see continued strength in U.S. markets, generically. 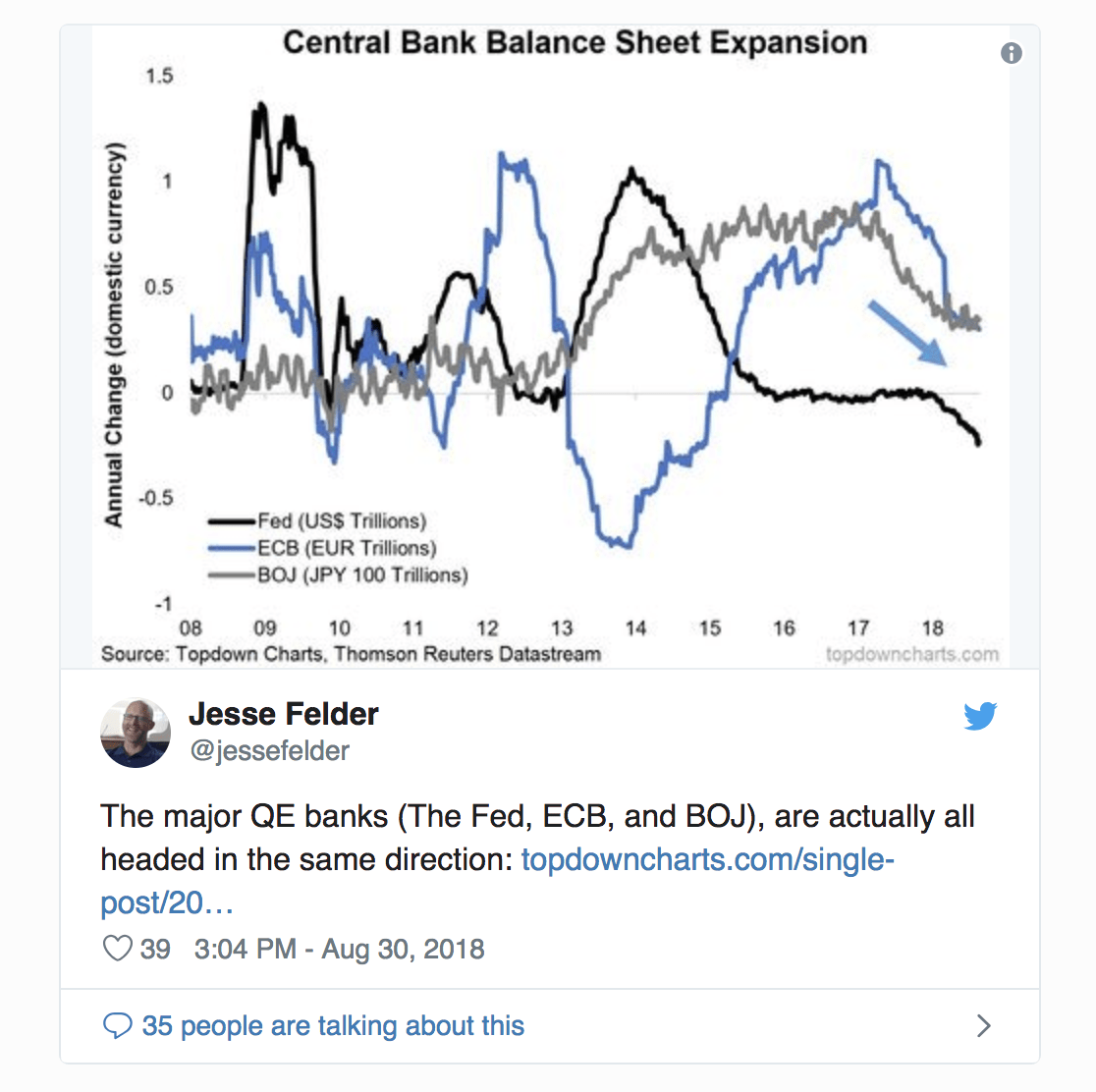 Mr. Snider believes that we are currently witnessing a short squeeze in the U.S. dollar. The global monetary and financial system (still) runs on U.S. dollars. Thus, the U.S. remains structurally long the asset while the rest of the world is short. The recent appreciation of the U.S. dollar is exacerbating this shortage, and in Mr. Snider’s view, creating a scramble to obtain the “dollars” required to support local economic activity. He sees the Fed’s tightening of liquidity as creating a headwind for growth, globally.

Looking back at two previous EM crises—the Latin American one from the early-1980s and the Asian one in 1997—reveals that capital generally flowed into U.S. denominated assets during those events. This is similar to what we’ve recently seen. However, it was not smooth sailing; there were periods of substantial volatility and drawdown. Nonetheless those instances ultimately proved to be buying opportunities. Will history repeat itself?

At the risk of disappointing, I will leave the discussion of “ought” to others. The focus of this article is on the “is” portion of the investment process (an underappreciated one in my opinion). Certainly Mr. Johnson has expressed a strong view and there is no shortage of other, well-articulated ones. Nonetheless, I hope that this exercise has proven to be fruitful. Gaining just a few more emergent pieces should hopefully bring us one step closer to solving the impossible puzzle of macro investing.

A version of this article first appeared on The Integrating Investor.