The chilli peppers were used by the astronaut Megan McArthur to make tacos for the crew.

The National Aeronautics and Space Administration (NASA) claims that growing food in space has big advantages for endeavors like trying to visit Mars and other destinations.

The U.S. space agency said the chile peppers were grown for the Plant Habitat-04 investigation.

NASA's experiment involved microbial analysis to improve the understanding of plant-microbe interactions in space and the crew’s assessment of flavor, texture, and nutrition of the first peppers grown in space

The seeds were brought to the International Space Station (ISS) in June, part of the National Aeronautics and Space Administration (NASA) experiment to see what foods can be grown in space.

Astronaut Megan McArthur tweeted this past Friday that the National Aeronautics and Space Administration (NASA) crew tasted the peppers, and that she used them in tacos along with fajita beef, rehydrated tomatoes and artichokes.

McArthur stated that the astronauts had to fill in surveys after tasting the peppers. 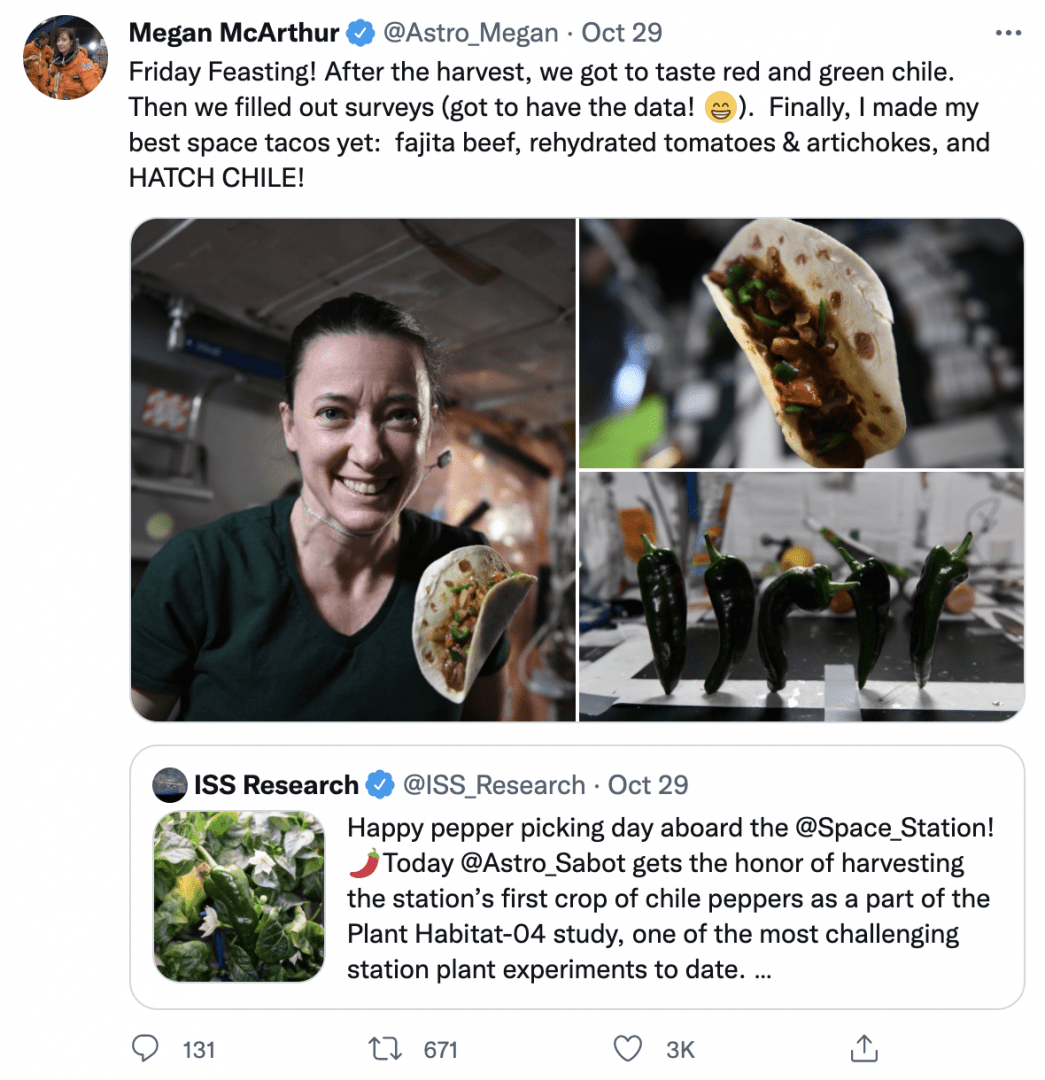 The process developed by National Aeronautics and Space Administration (NASA) was the first time astronauts were able to cultivate a crop of chili peppers on the station from seeds to maturity.

The National Aeronautics and Space Administration (NASA) astronaut will probably eat the peppers if they are tasty and also save some to bring back them back to Earth for study.

NASA has already cultivated Chinese cabbage, 3 types of lettuce, red Russian kale and zinnia flowers up in orbit around the Earth.

View all
6 Reasons Why You Should Consider A Fish Tank For Your Office
7 Useful Small Business Marketing Tips
Need To Get Ready For That Job Interview Soon? Listen To These Tips
A Guide to Kick-Starting the Digital Transformation Journey of Your Business
The Elements of Scale: Capabilities You Need in your Test Automation framework and infrastructure
7 Interesting Careers Perfect For A Switch
Expert Tips To Create An Environmentally Conscious Workplace
Climate Emergency Innovations and Insights in Business
Why It’s Crucial To Fix Your Business Energy Prices Before 2023
Artificial Intelligence Is Transforming The Aviation Industry
How Has the Energy Crisis Impacted the Cleantech Job Market?
PADI Dives Into Global Conservation
When Should You Get an Emergency Loan
Why Do You Need Car Insurance?
A Short Guide to Employee Group Life Insurance
Benefits of VR L&D Training for Higher ROI
How and Why to Refinance Your Mortgage
How To Renew Bajaj Allianz Bike Insurance? Important Steps To Know
When Surrounded By Exponential Growth, “Wait and See” Can Mean Missing An Opportunity
HR Digital Transformation and the Rise of AI in the Corporate World
Peltzman on Stigler on Regulation
Should the US Switch to a Declining Discount Rate?
Putting U.S. Labor Force Participation in Context
Keynesian Policies Have Left High Debt, Inflation and Weak Growth
The Safest and Most Dangerous Places to Work in the UK
Investment Charges When Mexico Privatized Social Security
Henry Adams on the Corruptions of Power
Former Pakistan Prime Minister Imran Khan Shot in Foot in Clear Assassination Attempt
Benjamin Netanyahu Set to Return as Israel's Prime Minister
Reflections on Sources of US Energy Consumed
How Do You Get Addicted to Alcohol? Everything You Need To Know About the Addiction Process
How AR Glasses Can Tackle Visual Impairement
Main Reasons Why A Young Woman May Have Low Progesterone
How to Gain More Control Over Your Mental Health in Today's World
How Food Insecurity Is Driving an Increase in Adult Disordered Eating
6 Keys to Finding The Top Diet Pills Online
Want To Improve Your Business Skills? Here Are Some Ideas
How Blockchain Can Tackle Homelessness
How To Reject Opportunity; Like Turning Down the Beatles
State Your Case and Win
7 Common Garage Problems and How To Solve Them
Are You Struggling With Alcoholism: Here Are 10 Things You Can Do To Make It Stop
Choosing Technology for Your Business
Reducing Cyber Underwriting Risk Starts with the 3 “Bs”
Productivity Hacks for Remote Workers
Essential Guide to Use Google Local Service Ads
9 Trends That Will Dominate Blockchain Technology In 2023
4 Ways Artificial Intelligence Has Revolutionized the Retail Sector

When Should You Get an Emergency Loan
Choosing Technology for Your Business
Want To Improve Your Business Skills? Here Are Some Ideas
6 Reasons Why You Should Consider A Fish Tank For Your Office
Reducing Cyber Underwriting Risk Starts with the 3 “Bs”