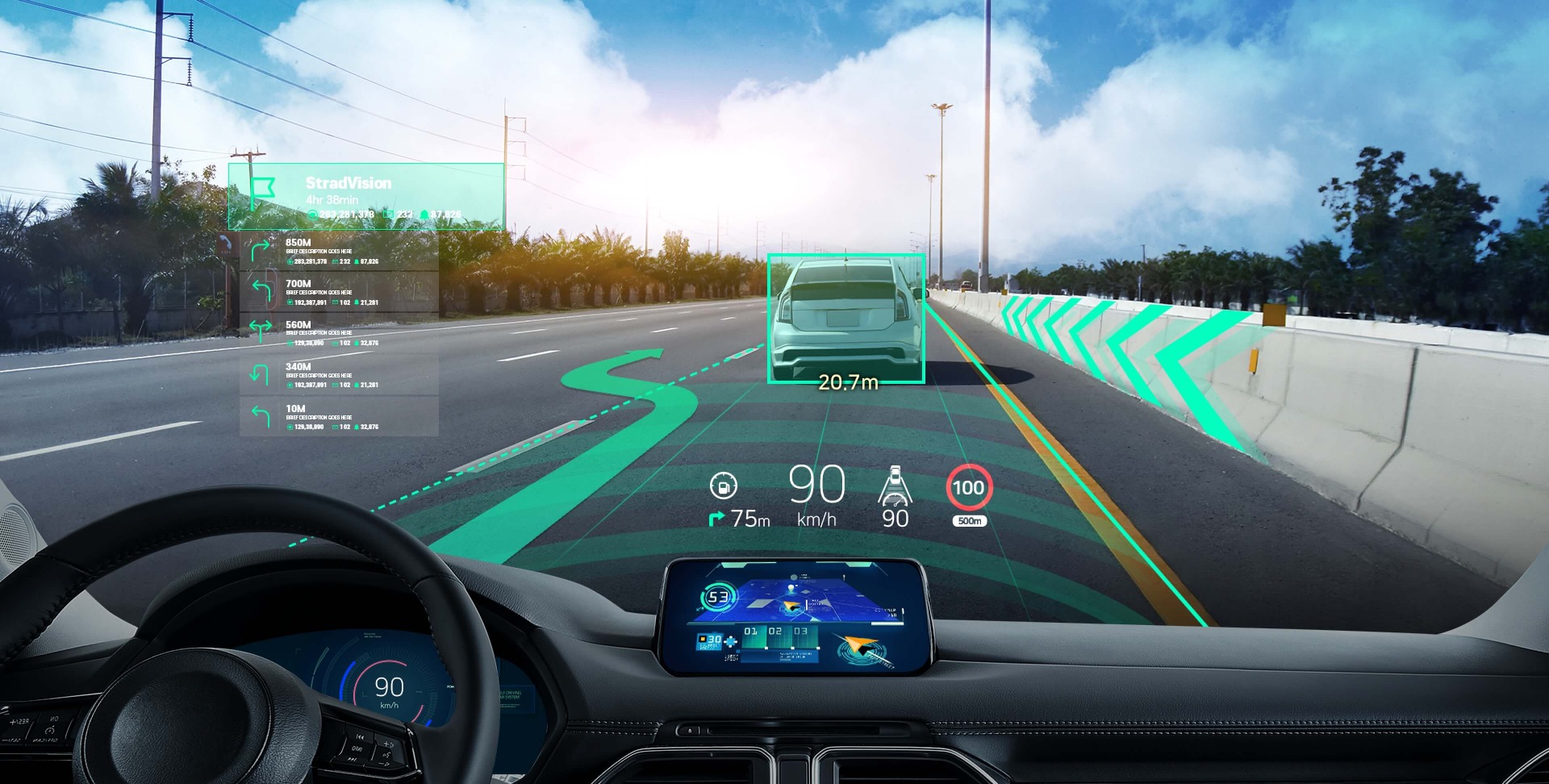 The involvement of augmented reality (AR) in smart cities and the safety systems of modern vehicles promises to resolve a frequent cause of vehicular accidents—blindspots.

In automotive speak, blindspots are defined as the external spaces that the driver of a vehicle cannot see while driving. External visibility is generally poor for drivers because, apart from the zones visible through the glass areas and the ones reflected by the rear-view and wing mirrors in vehicles, they cannot see much else outside. This may seem like an insignificant problem at first, but dive deeper into the numbers, and you'll find that about 840,000 crashes and 300 deaths occur every year due to blindspot-related accidents.

The implementation of AR in smart cities and modern vehicles can be seen as a remedy for this issue. Recently, AR and VR-driven simulations have steadily emerged in vehicular safety testing. So, if vehicle manufacturers need to resolve the blindspot problem, they can look towards a few promising AR-driven concepts and solutions. 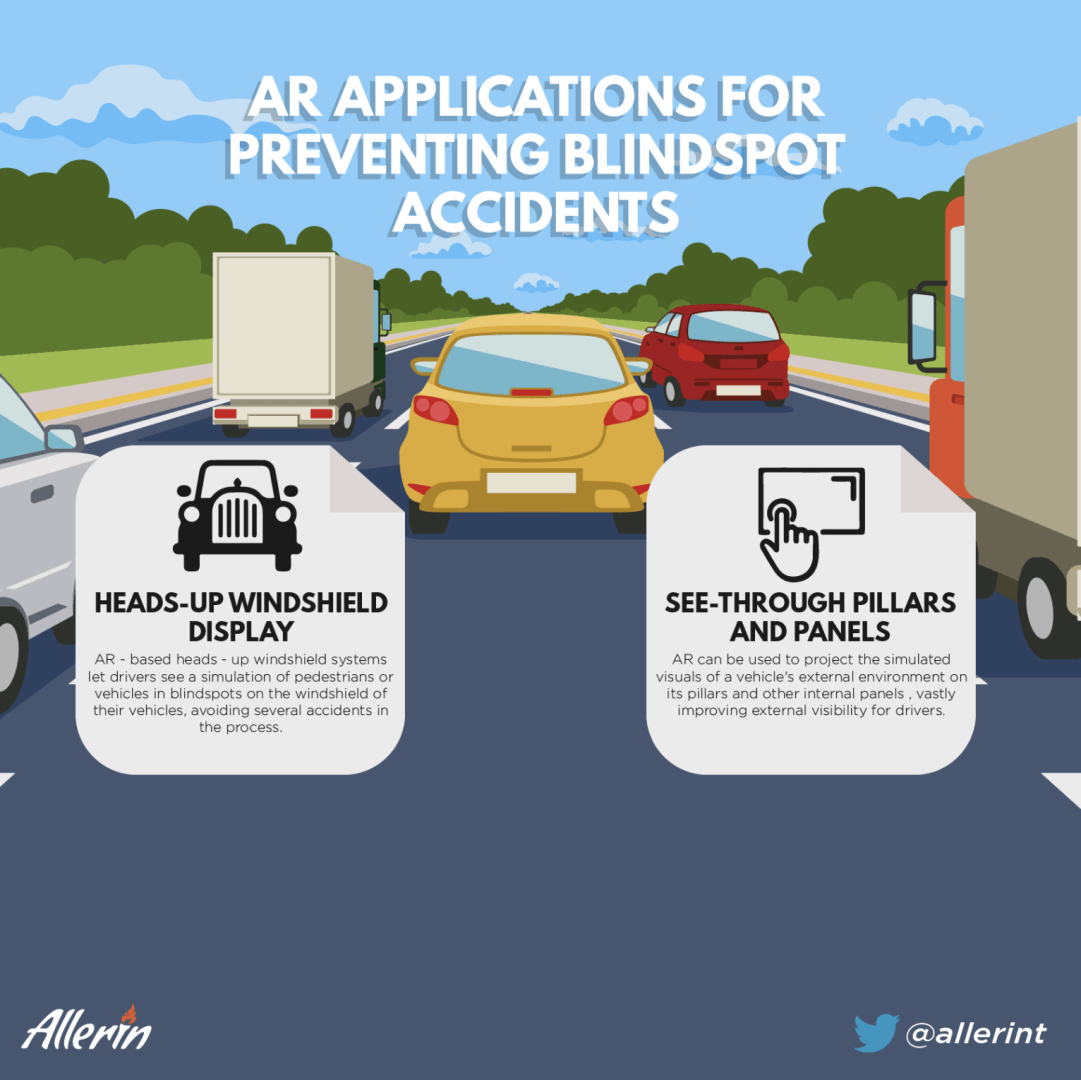 Several vehicles manufactured by companies such as BMW, Bentley, Audi and many others have AR-based heads-up windshield systems that allows drivers to focus on the road ahead instead of being distracted by information on their vehicle's dashboard infotainment systems. Heads-up display systems involve road signage as well as pedestrian and vehicle proximity data being displayed on the windshield of the vehicle. As you know, the possibilities are endless when it comes to AR, safety and visibility tools. So, manufacturers can configure such systems to project the visuals of pedestrians and other vehicles approaching or standing in blindspot areas of their vehicles (regardless of whether they’re static or in motion). This will let drivers see a simulation of pedestrians or vehicles in blindspots on the windshield of their vehicles, avoiding several accidents in the process.

This is a slightly more unrealistic way of using AR for blindspot elimination. According to this concept, AR can be used to project the simulated visuals of a vehicle's external environment on its pillars and other internal panels, vastly improving external visibility for drivers. Several concepts similar to this are currently in various stages of development. The success of this idea will greatly enhance the safety aspect of vehicles of the future.

On a basic level, blindspots are a result of the anatomy of vehicles today and will cease to exist if future vehicles are built differently. Until then, the use of AR in smart cities and connected modern vehicles can help reduce the number of accidents caused by blindspots.

View all
Why High Performing Organizations Don’t Leave Development to Chance
How To Get More Work Coming Your Way As A Property Manager?
11 Reasons Why Annual Reports Are Important
Top Reasons English Is a Global Language, and You Should Learn It in 2022
Why Workplace Injuries Can Happen Even in Offices and How to Reduce the Risks
Roof Maintenance Tips for Businesses: How to Keep Company's Premises Safe
Green Blockchain Plays a Major Part in Fending Off Climate Change
8 Great Ways to Help You Save Energy
How Blockchain Technology is Reinventing The Power Grid
How Blockchain and IoT Collectively Reshape Food Production
4 Ways To Make Sustainability A Part Of Your Everyday Life
Are Mushrooms the Future of Fashion?
Compliance Management is Reforming: Can Revenue Generation be a Possibility?
Bank of England (BoE) Steps in to Calm Down Financial Markets
Markets Crash as Monetary Laughing Gas Fades
More Than 30% of British Adults Are Involved in Entrepreneurship
How To Cancel Timeshare Legally Without Being Scammed
Understanding Personal Financial Management: What You Need To Know
Some Economics of Tobacco Regulation
Some Human Capital Controversies and Meditations
US Unions and Alternative Voices for Labor
Core Inflation Soars, Retail Sales Weaken
Labor Economics: Quiet Quitting, Firing, Mental Health and Productivity
The Slowdown of U.S. Productivity Sector
King Charles III's New Royal Cypher Revealed
76 Theses on American Patriotism
Why Are More People Becoming Right Wing?
A New Law That May Impact Prince Andrew, Princess Beatrice and Prince Harry
King Charles Meets Northern Ireland's Political Leaders During Historic Visit
The Role Machine Learning in Tracing Historical Events
Why You Should Always Put Your Wellbeing Before Other Matters
Brilliant Thinkers Relish Ambiguity, Dull Thinkers Loathe It
Treating Anxiety with VR Technology
The Rise of Telemedicine
You Want Straight Teeth, But Don't Like The Looks Of Braces? Here's The Solution
What Should Hospitals Add To Ensure Maximum Patient Comfort
Why You Should Not Lead If You Aren’t Authentic
How to Transition your Culture as you Scale your Organisation with Darrin Jahnel
Why Is It So Hard To Learn From Our Mistakes?
35 Hidden Countries
How To Know If You're Ready For The Next Step In Your Relationship
Toward a More Spiritual You
How Computer Vision is Revolutionizing the Manufacturing Supply Chain
Leveraging Blockchain and NFT in E-commerce
Looking for a PC that Caters to Your Requirements? Here's a Brief Guide
AR and IoT Applications for Industrial Verticals
Resolve the Data Discrepancy Conundrum in Your Supply Chain Cycles with Blockchain
How to Write Website Content that Drives Traffic

How Computer Vision is Revolutionizing the Manufacturing Supply Chain
Leveraging Blockchain and NFT in E-commerce
Why You Should Not Lead If You Aren’t Authentic
Why High Performing Organizations Don’t Leave Development to Chance
Compliance Management is Reforming: Can Revenue Generation be a Possibility?