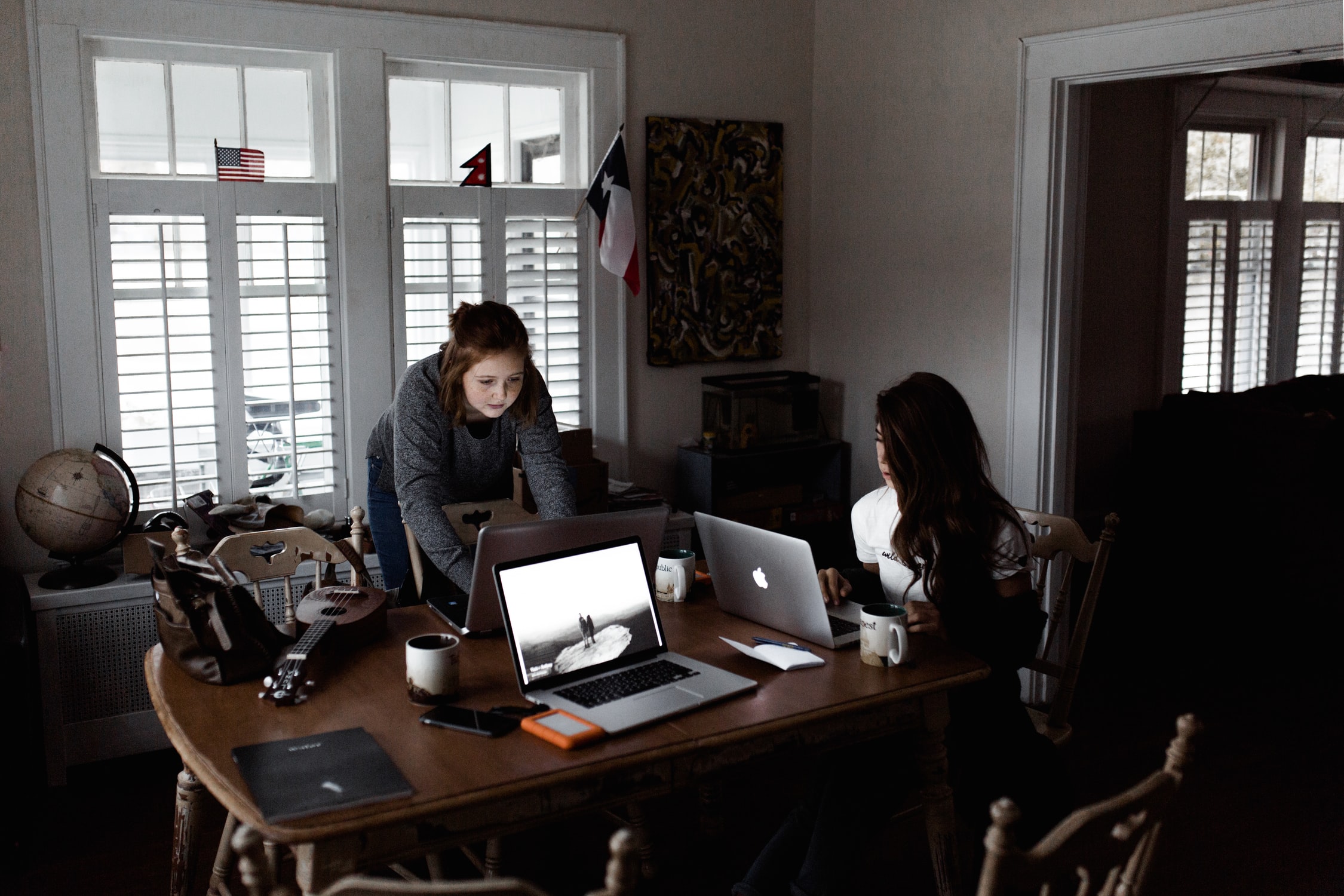 Most of the businesses are developing apps that should work on Android and iOS.

This is the main reason that people choose cross-platform solutions. You can always choose multi-platform development and can build the app having a small team and can release it quickly. There are so many cross-platform frameworks available online but it depends on you to choose the best one available. Which one is better - React Native - Xamarin - Ionic? Let’s read the full article to understand the three of them in detail.

What is Cross-Platform Development?

Cross-platform development can be defined as the practice of building software products and services for various platforms or software environments. Developers always use different ways to accommodate diverse operating systems or environments for any one product or app.

Rather than creating different versions of the app, you can opt for cross-platform app development that will efficiently run on all the platforms. Using the cross-platform development method, developers can use the same code and can deploy it on multiple platforms in one go.

Important Attributes You Need to Consider While Choosing Cross-Platform

React Native uses JavaScript which is the most popular, high-level and dynamic programming language.

Ionic makes use of HTML5, CSS and JS for developing and running applications and it needed Cordova wrapper for accessing native platform controllers.

React Native apps can share their JS code up to 80-90%. Its performance is a little close to native and it renders code components directly to the native APIs with the help of JavaScriptCore Virtual Machine for Android and iOS both. Also, React Native App Development Services allows Native iOS and Android modules which are written in Objective-C and Java.

Ionic make use of web technologies for renewing apps and it never uses native components while trying to replicate native behavior when using web technologies. For connecting the app with native APIs, Ionic makes use of Native Wrapper Cordova and adapts app behavior to the underlying platform.

The modules of React Native communicate with native iOS and Android US controllers that enable user experience very close to native applications. ReactJS library with extensive UI components can streamline the whole UI development. This is the reason that React Native app development consists of many different UI components that are out-of-the-box like sliders, modules and buttons that help the app developer to work faster.

Ionic does not contain any native component and it renders everything in HTML and CSS. It uses Cordova for recreating native mobile app behavior. Also, it comes with new native-styled UI elements and layouts that were not present on the web earlier.

If you are working on Xamarin, then you would be required to install Visual Studio for developing, building and debugging applications. It is considered as the most famous and robust IED if developers are working with C# or .NET related projects.

Ionic uses visual Studio Code in it which comes free distributive powered by Microsoft. Developers will need to perform some kind of tricks for debugging from the Visual Code directly.

React Native is quite similar to Ionic concerning the coding and building process. Developers can make use of Visual Studio Code, ALM, WebStorm, Atom when setting up the same environment for debugging on a device and deploying to the app stores.

React Native has the best recognition in the market and community. Its network of developers is growing vastly and has many experienced React Native Engineers. This helps to kick start any React project quickly and without much effort. It uses an amazingly popular library which is React the most important web development language i.e, JavaScript and delivers real native applications. These are the qualities that make it a strong and independent platform.

Ionic is considered as the second most popular framework after React Native. It helps developers to create native mobile applications in the fastest manner.

Xamarin is a quite popular framework and Microsoft is still putting much effort to grow the Xamarin community.developers working inside the Microsoft ecosystem can begin working with the innovation because of its active support.

Xamarin does not need to switch in between the development environments. All types of Xamarin apps are built-in visual studio. You can reuse 96% of source code with Xamarin.forms that help in speeding the development process.

Ionic has an essential part in the app development process and i.e. its universality. No matter which OS you are working on, it will work the same for each of them. Some UI components need to be changed as per the rules dedicated by each platform and this will require extra efforts.

React Native was launched by Facebook in 2015. There got a boom in the market for hybrid frameworks. Within just a few days of its launch in the market, it has become the most popular framework in the market among all other cross-platforms.

Below are some Pros and Cons of React Native

Xamarin is an independent cross-app development framework which was launched in 2011 and was later acquired by Microsoft in 2016. Xamarin is an open-source framework that was specially launched for solving the disjointed native technology stacks problems that made mobile app development difficult and expensive.

Below are some Pros and Cons of Xamarin

Popular applications built on the technology

Ionic an open-source cross-platform app framework which is licensed under MIT. Ionic uses HTML5 for translation and is very similar to AngularJs in the design and structure. Also, Ionic inherits a few design elements from Android and iOS. It gives you a full option for building native-like hybrid apps for iOS and Android and also for progressive web apps.

Here are some Pros and Cons of Ionic

Popular applications built on the technology 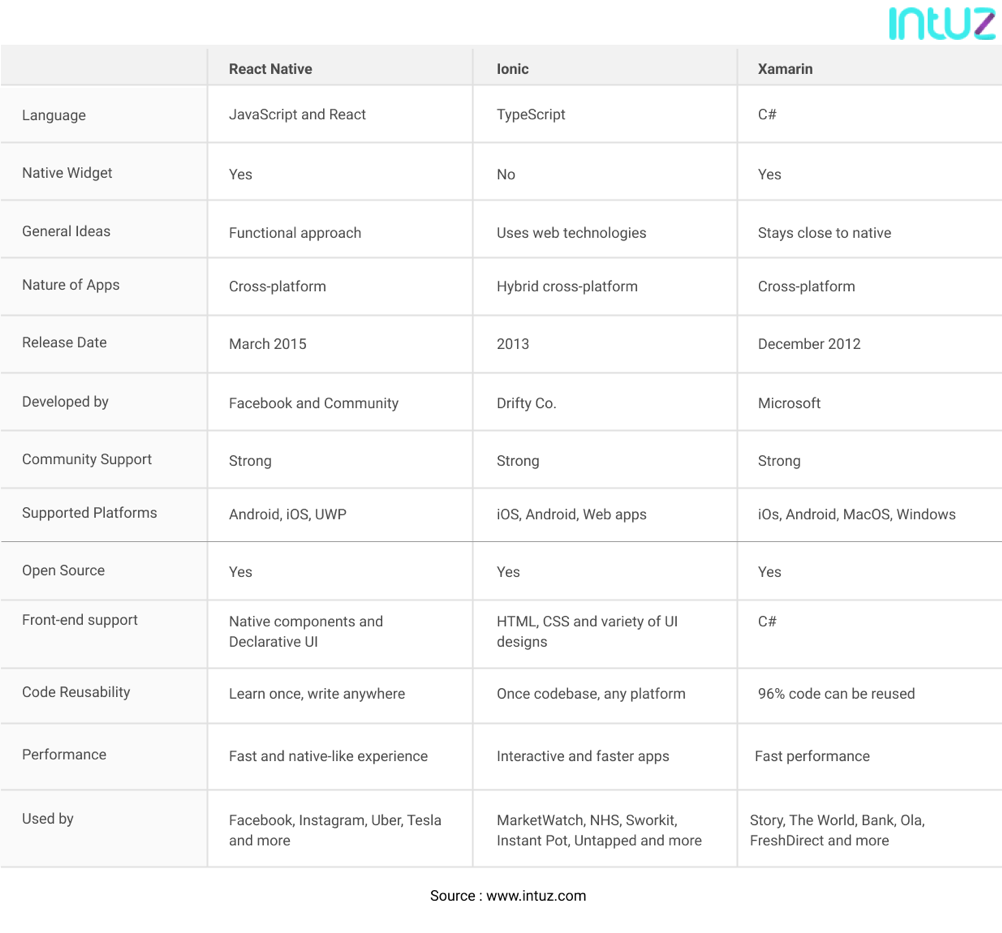 It is difficult to decide the best cross-platform development among these three platforms i.e. Ionic, React and Xamarin. The three of them have their features, advantages, specialties, and profits of using them for mobile app development. It’s totally up to you that which cross-platform suits your app development need as per your business area.