How Virtual Reality and Artificial Skin Can Aid in Rehabilitation

How Virtual Reality and Artificial Skin Can Aid in Rehabilitation 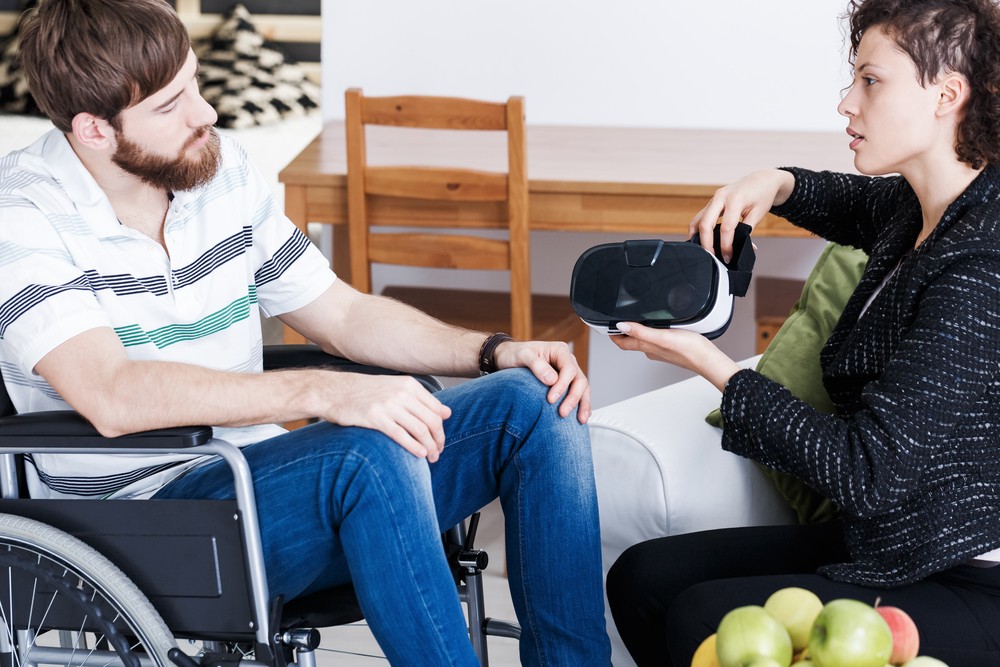 Conventional methods of rehabilitation and VR are used in tandem since the emergence of VR in the healthcare industry.

They work well together to accelerate recovery processes, and now artificial skin can take the treatment process to an entirely new level.

Since the very emergence of VR, the healthcare industry has adopted it to leverage the benefits that have the potential to reshape the industry. VR can help in physical rehabilitation by improving motors skills and aiding muscle recovery. Furthermore, VR can create a virtual world of all the memorable moments of the patient to improve the process of mental rehabilitation. Until now, patients were only able to see those moments. But now, a soft wearable interface with high-fidelity tactile feedback can help feel the artificial world of VR and relive past moments. A group of researchers from robotic laboratories, situated in SWISS, created artificial skin that can allow the patients to touch the objects of the virtual environment and feel them.

The Functioning of Artificial Skin to Benefit Rehabilitation and Virtual Reality

The system used to operate the artificial skin consists of soft sensors and soft pneumatic actuators (SPAs). The soft sensors and actuators can provide feedback in the form of vibration and pressure. The feedback provided is then adjusted in real time to give a sense of touch that can be as realistic as possible, to the rehab patient. The integration of sensors and actuators gives close control to modulate the vibration stimulation felt by the patient. The artificial skin is made of silicon and electrodes. The skin comprises a membrane and a sensor layer. By pumping air into the membrane of the artificial skin, it can be inflated. The inflammation can be tuned to varying pressures and frequencies ranging from 0Hz to 100Hz. The sensor layer is based on solid gallium and a mix of liquid that can convert mechanical stress to change in electrical resistance. The membrane layer of the artificial skin starts vibrating when it is inflated and deflated rapidly. The liquid-solid gallium mixture electrodes of the sensor layer measure the vibrations continuously and send the data to a microcontroller. The microcontroller uses the haptic feedback to fine-tune the sensation transmitted to the artificial skin according to the movement and changes of external factors.

The artificial skin developed by the researchers at robotic laboratories is the first time anyone has created a wearable that can give a sensation of touch. Even at this early stage of development, artificial skin has the ability to be stretched up to four times its original size. The stretching ability gives artificial skin the potential to adapt to the patient’s movements instantaneously.

View all
John Savignano Values the Human Element in Accounting Success
Most Important Internet Marketing Strategies Every Entrepreneur Needs To Know
Working with Your Organic Clock
A Simple Guide - When's the Right Time To Contact a Personal Injury Lawyer?
Complete Guide to Business Process Automation: Benefits + Examples from Industry
Why Investing In Product Photography As A Business Owner Is A Smart Move
The Common Types of Solar Panels for Your Property
The Environment & Utility Services
How Has the Energy Crisis Impacted the Cleantech Job Market?
Global Food Crisis | Agriculture Subsidies | Climate Change | Drought
Energy Research For Electric Vehicles | Autonomous Thought Networks | Mechatronics
How Blockchain and IoT Collectively Reshape Food Production
Venture Capital: Size and Focus
Guide To Finding The Best Vacation Rental
How to Manage Your Money
What Is Credit Score, And Why Is It Important?
The Crypto Trilemma
Top Tips That Will Help You Gain Control of Your Bank Account Again
If Central Banks Do Not Tackle Inflation, Deflation Will Come from A Crisis
Sri Lanka & Ecuador: Economic Paths amid Hyperinflation & Energy Prices
Grade Inflation and College Completion
Pandemic Macro: Stimulus vs. Insurance
Why Government Anti-Inflation Plans Fail
Labor Economics: The Future of Work is Low-Budget Employment
76 Theses on American Patriotism
Global Food Crisis, Local Water Insecurity and Migrant Smuggling
The Truth Behind Japan’s ”Seven Minute Miracle”
Emmanuel Macron Wants to Develop a European Metaverse
Brexit: Some Early Evidence and Ironies
A Lateral Way To Expose War Crimes and Fight Disinformation
Monkeypox: Computational Hemodynamics | Virology Bubbles Research
Monkeypox: Digital Epidemiology, eHealth for Pre-Epidemic Tracing
Memory Neurobiology of Cancer’s Chemo Brain | COVID’s Brain Fog
Behavioral Neuroscience: Thought-Memory Variations & Genetic Variability
How Brain Science and Telepsychiatry Can Change Mental Health & Addiction
4 Major Issues of VR-Based Retail & Shopping
6 Things To Consider When Renovating Your House
What is the EB-5 Visa Program for USA Residency and How Much Do You Need to Invest?
Thought Science Research, OCD & Eating Disorders
Sky Cruise: Flying Hotel To Accommodate 5000 Guests
From EA to Chief of Staff: Some Important Observations
What Are the Optimal Conditions for Defining your Brand Strategy?
Follow These Pieces of Advice to Stop Getting Spam Emails
6 Benefits Of Buying Refurbished Phones You Should Think About
How Swarm Intelligence Will Optimize Your Supply Chain Operations
Einstein, Empathy and AI
How to Design an App That You Can Develop on a No-Code Platform?
What Jake and Flo Aren’t Telling Us: Disruptions Constantly Change the Insurance Industry