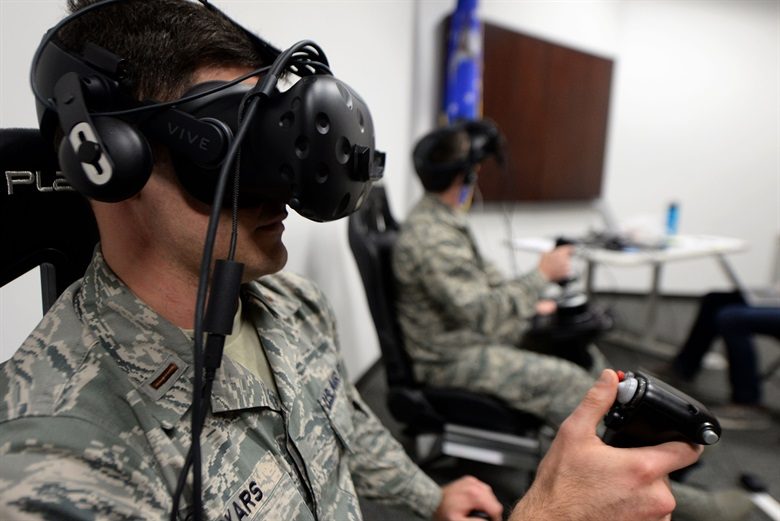 There are some jobs that are difficult to train for.

The same goes for military training. While there are exercises and tools that can be used to simulate and approximate warfare, none is able to truly capture the experience of being shot at and having to make life-or-death decisions in a matter of seconds. Fortunately, technology is changing all that and providing a more affordable, more flexible, and ultimately more realistic method for preparing soldiers for battle.

According to LTC Michael Stinchfield of the Combined Arms Center’s Training Innovation Facility at the National Simulation Center, VR experiences are helping to offer ‘better training for soldiers, more efficiently’.

VR equipment is getting more affordable, more accurate, and more immersive. Thanks to this development, it is now being used for a whole range of training scenarios: from mission rehearsals to live fire exercises. And as a result, combatants can test their focus, their reflexes, and their retention of information.

In other words, it’s one thing to sit through a class teaching advanced battle tactics. It’s quite another to be running for cover while your colleagues provide suppressive fire.

Not only does this create a safer and more controlled environment for training, but it also allows instructors to more closely track and monitor performance (thanks to the ability to get advanced metrics from VR applications), as well as to save money on equipment, tools, and even instructors. Instructors can now even provide tutelage remotely!

As one military representative told Samsung:

“One of the benefits of this technology is that it can be used anywhere, making it easier to conduct effective training, in a shorter time frame and in multiple settings.”

Here, VR is being used for tactical exercises and simulations too. Here, the life-life experiences are used to mimic real-life scenarios that military personnel may encounter in the field. That means things like dealing with multiple targets, or following instructions when entering an unsecured building.

The truly amazing thing about VR is that it can be altered to fit any scenario and any training application. Once the basic physics engine is in place, it’s relatively simple for a team of programmers to change parameters, to alter elements of the environment, or to raise or lower the difficulty. That means it can test the broader ability of soldiers as in the previous examples, or it can test the granular independent elements that make up a soldier’s overall ability.

This allows VR to be used in a wide variety of training situations. For instance, VR training will typically begin with a ‘virtual boot camp’ style of experience that can be done with 360 VR video. From there, diverse scenarios can be introduced depending on the needs of that particular service. There may be programs testing physical fitness, skills (such as putting together weaponry), knowledge (identifying certain types of situations or equipment), or even medical training! Then there are vehicle and flight simulations, that is an ideal application for VR to help augment other forms of training. Here, the VR headsets are typically used in conjunction with simulators that recreate the physical movements of the virtual vehicle. In some cases, this experience can be almost indistinguishable from the real thing!

The army is just one organization that has shown an interest in VR technology. Of course, there are many more potential applications for this game-changing tech. It should come as no surprise that the same medical application is something that has been used to train doctors, surgeons, nurses, and other medical personnel for instance.

Likewise, it is only logical that this is a tool that NASA should also employ. It’s only a matter of time before we see a more widespread use of VR in classrooms. Imagine teaching Egyptology by letting children walk around a simulation of the Great Pyramid of Giza!

What’s more though, is that VR can be used to train the brain beyond simply learning and testing skills.   The brain is at its most plastic and adaptable when it is focussed and learning. We spend much of our lives sitting down and focusing on a big screen in front of us. The skills that are rewarded in business are those that require us to turn our minds inwards.

But success in combat comes down to being alert and focused: it’s about rapid decision making and quickly identifying potential dangers on the horizon. VR can help to train these abilities by placing us in situations where we are surrounded by virtual opponents, and by forcing us to react quickly and aim true.

As far as our physiology is concerned, this is no different to the real thing. This can trigger something called ‘brain plasticity’ – actually leading to the creation of new neurons and new connections that help to improve brain function.  Studies show that people who play computer games have great decision-making skills, along with better visual acuity. Imagine what VR can do for the brain then!

In the future, we can expect to see VR find its way into more settings. At the same time, its current uses will be expanded throughout the military and beyond.

Of course, resolutions and graphical fidelity will improve. Likewise, inside-out-tracking (a technology that relies on computer vision in order to approximate its position in space) will allow headsets to work ‘untethered’. They will get lighter and they will learn to track all the natural movements of our limbs. In short, they will allow for far more energetic and physical training scenarios.

At the same time, it’s only a matter of time before the military starts combining this technology with other innovations. For instance, ECG readings can be used to look for activation of specific brain areas. This can, in turn, provide vital biofeedback during combat training – so that coaches can see how their team is responding to challenges and help them to remain calmer and more alert. This could all help military personnel to improve their ‘unit cohesion’ – an elusive and crucial concept for surviving combat situations.

Finally, VR training may have particular relevance for a new breed of soldier: those that pilot unmanned drones and other vehicles. For them, all warfare will be remote, VR warfare. What training could be more apt?  And as VR technology improves, the potential for this type of control will also improve.

In short, VR is currently playing a crucial role in the training of military personnel. However, we are only just scratching the surface of what it is capable of. This technology may be slow to reach mass adoption in the commercial market, but its potential applications spread far beyond that. It will change the way we do business, the way we communicate with friends, and the way that we entertain ourselves.  But perhaps most surprisingly, and impactfully; it will change the very way that we wage wars.