The Evolution of the Assembly Line Continues With Robotics

The Evolution of the Assembly Line Continues With Robotics 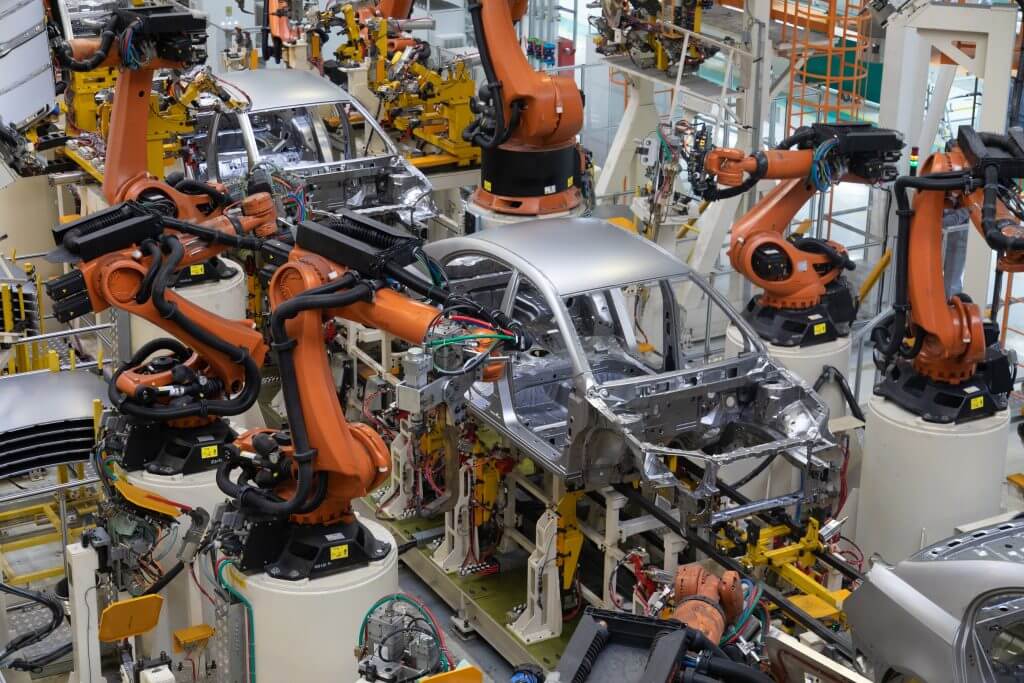 Robots are powering the evolution of the assembly line.

Modern manufacturing is built on the assembly line model, but it has changed significantly over the years. Without technological advances, we wouldn’t have easy access to all kinds of products, such as cars or appliances. Robots are at the forefront of manufacturing today.

Here’s a look at where assembly line tech has been and where it is going in the future with today’s advancements in robotics. The Evolution of the Assembly Line

Imagine trying to paint an entire building. It might take one person 20 hours to finish the job. On the other hand, 20 people could finish it in just one hour. This is the principle behind assembly lines, the manufacturing strategy that has built the modern world. Products are manufactured using a set of standardised parts. The product moves through the process in stages, with a new component added at every one.

Assembly lines are highly efficient, whether humans or robots are doing the work. In fact, they completely changed the world when they first became popular, resulting in the Industrial Revolution.

The First Industrial Revolution took off in the mid-18th century in the U.K. and gradually made its way to Europe and North America soon after. It saw the introduction of steam power and advances in textile manufacturing, which would later lead to the widespread use of assembly lines.

These early assembly lines relied on human employees to carry out each step of the process. In the mid-20th century, robots began to revolutionise the manufacturing world.

The Rise of Robotics

Assembly line manufacturing was undoubtedly a good idea — a team of people could quickly and efficiently put products together. Skilled artisans were no longer required. Plus, assembly lines could make products faster and with better consistency from one unit to another. Since the products used standardised parts, things like guns, tools and cars were also easier to repair.

However, the assembly line still needed to evolve. That’s why robots were introduced to manufacturing in the mid-20th century. The first successful industrial bot was the Unimate, developed by Unimation Inc. for the General Motors automobile assembly line. It was installed in 1961 at GM’s Trenton, New Jersey, plant. This began the rise of machinery in manufacturing. Today, industrial robots are booming — the global industrial robotics market is projected to be worth USD 81 billion by 2028.

Robots mark a critical turning point in the evolution of the assembly line. They allow assembly lines to be safer. Worker safety was a major issue in the early Industrial Revolution, especially while child labour remained commonplace worldwide. Robotics means employees no longer needed to handle dangerous parts or tasks.

Robots improved assembly line efficiency, as well. Manufacturers quickly realised machines could operate with much greater consistency than a human could. Human error could lead to lost revenue and pose a serious safety risk on the manufacturing floor, which was dangerous to begin with. Robots solved these problems. They can perform the same task repeatedly without suffering from fatigue or loss of focus.

Early manufacturing robots like the Unimate were more like mechanical avatars for employees. Workers were still needed to operate them in real-time. Many manufacturing robots still work this way today, but things are changing. Automation is the most recent revolutionary technology in the evolution of the assembly line.

Computers, programming and AI have enabled manufacturing robots to advance over recent years, removing human operators from the process. Automation adds a layer of intelligence to mechanical robotic systems and allows them to run independently. In many ways, it has unlocked the full potential of robots on the assembly line.

Automation can take several forms. It might be as simple as using an automation software application to programme a robot to run independently. AI could also be used to automate assembly line bots. AI algorithms can use various sensors to collect information about their environment and adjust their actions accordingly. They can also use machine learning to improve performance and learn new skills. These capabilities are invaluable for manufacturers in all kinds of industries.

For instance, a gardening supply manufacturer may need to package fertiliser into plastic jars. Employees could do this by hand, but that would be expensive and time-consuming. Robots can speed up the process, although it would require some way to ensure precision. Otherwise, fertiliser would be spilt in the process of getting it into the jar, which would waste resources.

Automation is the key. The gardening supply manufacturer could use AI-powered robots to effectively and efficiently fill their jars with fertiliser. There are many ways to do this. For instance, an AI camera could use computer vision to “see” the jar’s opening and precisely navigate a robotic dispenser over that opening. Similarly, smart automation software could be used to programme the robot to only pour a certain amount of fertiliser or navigate to a precise location over a conveyor belt of empty jars.

Automation in this situation enables improved quality and reduced labour costs, two of the biggest benefits of automation. Software allows a robot to fill the fertiliser jars without human supervision, so the gardening supply manufacturer can operate with fewer employees and use resources better. Automated robots reduce the impact of human error, strengthen productivity and improve quality consistency.

Machines can perform the same task innumerable times with the same quality consistency. Automation and AI add intelligence to robotic processes, improving precision so results are consistent and satisfactory.

AI automation is gaining popularity in some of the largest manufacturing facilities in the world. For example, Ford is pioneering an advanced automation AI in its assembly line robots. Ford’s AI robots use machine learning to improve their performance over time, becoming more precise, accurate and dexterous. These capabilities allow manufacturers to save money, operate more efficiently and produce higher quality products.

Cobots: The Future of the Assembly Line

The evolution of the assembly line is still underway. AI automation is a breakthrough for manufacturing. It is especially important today since many companies are facing labour shortages. In fact, the National Association of Manufacturers estimates that the industry will be short 2.1 million workers by 2030. Automation and robotics are key to filling the gap.

Manufacturers have realised that robots can’t replace all human employees. Many tasks require creativity and an eye for detail, which people are much better suited for than machines. The assembly line needs a combination of humans and robots to reach its full potential.

Unfortunately, robots can sometimes pose safety hazards to people. Assembly line bots are often large, powerful machines. Many manufacturers keep them isolated from employees in fenced-off areas. This keeps workers from accidentally straying into a robot’s area of operation and potentially getting injured. However, it isn’t ideal for a robot-human collaborative workplace.

This is where collaborative robots, or cobots, come in. Cobots are the next evolution of the assembly line and the future of manufacturing. They are specifically designed to work safely alongside humans. For instance, a cobot robotic arm might have sensors that detect where people are standing nearby. Features like this maximise the potential for machines and humans to work together while minimising the risk of injury in the process. As collaborative robots gain popularity, they will help transform assembly lines to meet modern demand, even with smaller teams of employees.

The evolution of the assembly line plays a key role in modern technology. This form of manufacturing has allowed countless products to be created in an affordable, accessible way. Without them, only the wealthy could have things like cars, appliances and personal computers.

Robots are powering the evolution of the assembly line today and into the future. They have made work safer, more efficient, and more accurate and precise.

View all
Following the Lead of Bill Gates and Jack Dorsey, Australian Multi Millionaire Toby Carrodus Taught Himself to Code
Everything You Need to Know About Influencer Marketing
4 Indicators That You Need a Lawyer's Help After an Injury
Jonathan Bunge – Co-Chair of the National Trial Practice and Managing Partner-Chicago at Quinn, Emanuel, Urquhart & Sullivan, LLP
The Importance of Product Managers in Business - Six Things to Know
GDPR, UK GDPR and DPA 2018 — UK Data Privacy Laws Explained
Getting Serious about Carbon Dioxide Removal
Are All Cleantech Venture Capitalists Marxists?
The Issue of Energy Consumption in Smart Cities
Benefits of Digital Transformation for Water Utilities
How Organizations Can Reach Their Environmental Objectives
Artificial Intelligence Is Transforming The Aviation Industry
Successful Adoption of 3D Secure Authentication Continues to Grow Globally
Financial Services Trends To Watch Out For in 2023
Does Your Banking Business Need Super Apps?
The Top 6 Ways to Streamline Finance Operations in Your Business
The Science Behind Forecasting And Making Decisions with Annie Duke
Everything You Need To Know About Life Insurance
Global Commodity Markets
The Bounce in Disposable Personal Income
Is Globalization Fading?
The Economics of Non-Compete Contracts
American Doubts about Health Care
Global Earnings Recession Risk
US Unionization Rate Hits All-time Low
Lifting the Debt Ceiling Is Not a Social Policy
Understanding The Complexity of the War on Drugs and Policing
Investment Charges When Mexico Privatized Social Security
How the UK Can Navigate the Cost of Living Crisis, Strikes and Inflation
How the United States Can Improve Its Healthcare System
Crop Production is an Art as Much as it is a Science
Real vs. Fake AI - How to Spot the Difference
What NFTs and Blockchain Can Do for the Pharmaceutical Industry
Artificial Intelligence Can Prevent Epidemics and Outbreaks
7 Benefits of Walking Everyday and How To Motivate Yourself
Everything You Need To Know About Artificial Narrow Intelligence
The Advantages Of Custom Packaging
Win Back Your Time in February, One Tip Per Day
What You Probably Don't know About Moving in the UK
Charlamagne Tha God Talks Black Men, Therapy, and Telling Your Own Hero Story, On The Daily Show
Explaining College Attendance Gaps: Academic Preparation
Inspirational Movies Everyone Should Watch
Trends and Challenges in Quantum Computing
The Metaverse Effect in the Physical World
New Healthcare Tech and the Future of IoMT
When Will Artificial Intelligence Reach Singularity?
Impact of Web 3.0 on the Economy and Society
Setting Up And Configuring An LMS

Successful Adoption of 3D Secure Authentication Continues to Grow Globally
Following the Lead of Bill Gates and Jack Dorsey, Australian Multi Millionaire Toby Carrodus Taught Himself to Code
Trends and Challenges in Quantum Computing
Everything You Need to Know About Influencer Marketing
Financial Services Trends To Watch Out For in 2023