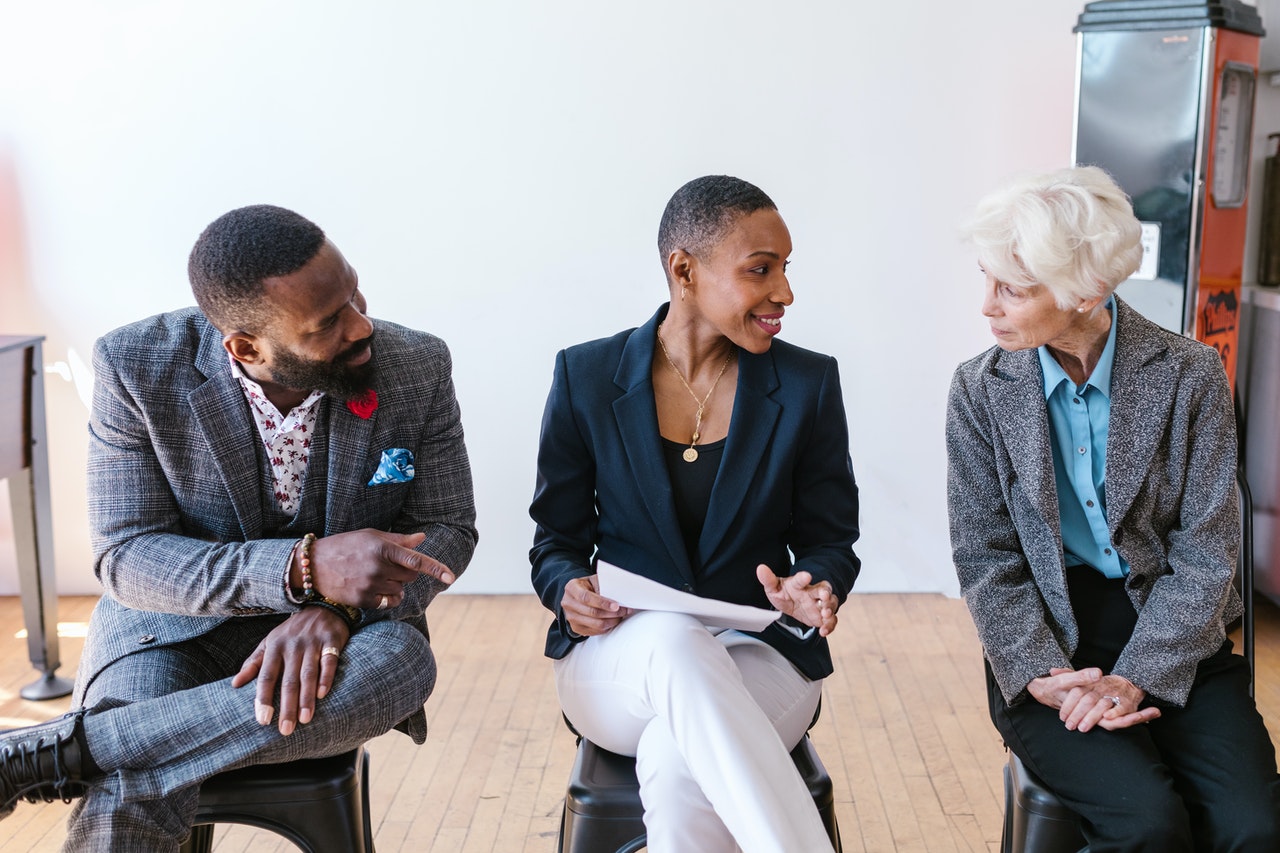 The Bank of International Settlements is owned by 63 central banks around the world, from countries which make up about 95% of global GDP.

Thus, when the BIS takes a chapter in its most recent annual report to argue that decentralized cryptocurrencies operating apart from central banks are a dead end, one possible response is to point out that the the central banks are defending their turf. Which is true. But it doesn’t mean that the argument is incorrect. The BIS is making the case that many recent financial sector innovations like decentralized finance, nonfungible tokens, and (reasonably) anonymous digital currencies will work better if they are grounded on the basis of central bank money, rather than on cryptocurrencies.

Here, I’ll try to summarize the BIS argument by breaking it into two chunks: the fundamental problem with crypto and the alternative vision for a future monetary system.

To describe the problem with cryptocurrencies, the BIS report offers what it calls a “scaleability trilemma,” but I just think of as the crypto trilemma. A “trilemma” is a situation where you can only get two out of three desirable outcomes. Here, the three potentially desirable outcomes are that a currency be secure, scaleable, and decentralized. 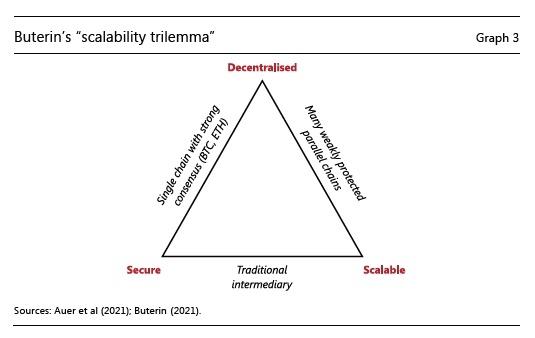 For example, conventional central bank money (the bottom line of the figure) is secure and scaleable. But it’s obviously not decentralized. Cryptocurrencies like Bitcoin and Ethereum are decentralized and secure. But there are about 2 billion digital payments made around the world every day. The process of updating the blockchains used to keep track of these kinds of cryptocurrency exchanges is notably costly in terms resources and is, by comparison with methods like modern credit card transactions, impossibly slow for addressing this volume of transactions. In other words, these secure and decentralized cryptocurrencies have not so far proven scaleable. Thus, the expansion of scale cryptocurrencies is in part driven by the arrival of new ones, which are decentralized but then often turn out to be less secure. A recent example is the collapse of the Terra “stablecoin", a cryptocurrency that was supposed to have have fixed US dollar value, but ended up being worth nothing and wiping out about $60 billion in value. In April, the Wall Street Journal ran a story called “Crypto Thieves Get Bolder by the Heist, Stealing Record Amounts.” They point out that in the last 38 weeks, here have been 37 major hacks at cryptocurrency/blockchain organizations.

The BIS report puts it this way:

The limited scale of blockchains is a manifestation of the so-called scalability trilemma. By their nature, permissionless blockchains can achieve only two of three properties, namely scalability, security or decentralisation (Graph 3). Security is enhanced through incentives and decentralisation, but sustaining incentives via fees entails congestion, which limits scalability. Thus, there is a mutual incompatibility between these three key attributes, preventing blockchains from adequately serving the public interest.

Must this trilemma hold true? Or might it be possible, for example, to have a cryptocurrency that is both scaleable and secure? In the article that provides the “scaleability trilemma” above, Vitalik Buterin argues that a process called “sharding” can provide the answer. He writes “Sharding is the future of Ethereum scalability, and it will be key to helping the ecosystem support many thousands of transactions per second and allowing large portions of the world to regularly use the platform at an affordable cost.” The broad idea is that the process of verifying the blockchain would be randomly split up into many smaller pieces (“shards”), so that the transaction blockchain would in effect be verified by a “committee.”

The technical side of just how “sharding” would reduce the resource requirements of blockchain updating and verification in a way that is equally secure but much cheaper are a little beyond my grasp–at least without more effort than I’m willing to spend on the idea just now. I have heard other proposals for dramatically reducing the costs of updating the blockchain, as well. Of course, the real proof of the idea will be when or if it happens.

The BIS suggests the possibility that, rather than struggling with to resolve the trilemma, financial innovation might be better-served by building on central bank credibility. They suggest a metaphor which looks like this: 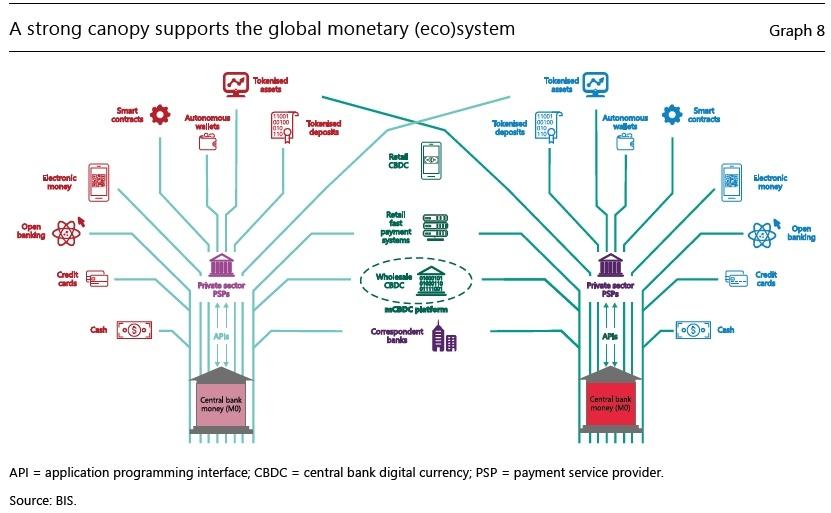 Central banks are the foundation. They continue to be hooked into the banking system and credit-card companies. The central bank might also provide a central bank digital currency (CBDC). But in this description, the central banks also become connected to “payment services providers,” who are non-bank firms that provide decentralized finance, tokenized assets and deposits, electronic money, self-executing smart contracts, autonomous wallets, and more.

The BIS goes into some detail about all this, digging down into issues of regulation, accountability, practicality, financial stability, consumer protection, and the like. As I see it, the basic idea is that it’s useful to think separately about cryptocurrencies and all the other financial innovations that are currently connected to crypto. Instead, it might be better for society if central banks made it possible to build the financial innovations of the future on the proven ability of central banks to provide currencies that are widely accepted and relatively in value.