Deflation: The Case for Worrying Less

Deflation: The Case for Worrying Less One of the arguments as to why monetary policy should continue to be loose, both for the Federal Reserve in the United States and for other central banks around the world, is to avoid the risk of a bout of deflation.

But is that fear overstated? The Bank of International Settlements offers a discussion ”The costs of deflation: what does the historical record say?.

When looking at historical episodes of deflation, the BIS offers a simple comparison. Look at the five years before and after an episode of deflation started for a range of countries, and see what happened to growth of real GDP during that time. As a starting point, consider pre-World War I episodes of deflation from 1860-1901 in ten countries:  Belgium, Canada, France, Germany, Italy, Japan, Netherlands,  Switzerland, United Kingdom, United States. Some of these countries had multiple episodes of deflation during this time: for example, the U.S. economy had episodes of deflation starting in 1866, 1881, and 1891. When you match up the five years before and after the starting point of an episode of deflation with the path of GDP growth, here 's what you get. The red line shows the price level (which peaks at time zero, because that’s how the figure is constructed), and the blue line shows the path of GDP relative to that time zero. For this time period, the onset of deflation on average doesn’t seem to have any effect on economic growth. 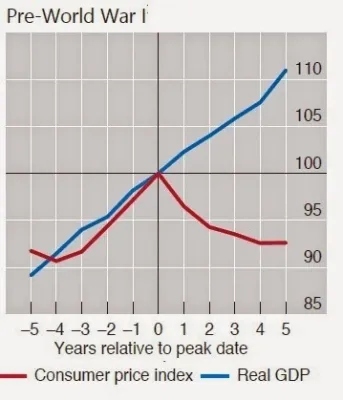 How about during the early interwar period, meaning the 1920s and early 1930s? Here, the path of GDP growth across the 10 countries in this sample is definitely faster before the start of price deflations rather than after–but it remains positive. BIS writes: ”In the early interwar period (mainly in the 1920s), the number of somewhat more costly (“bad”) deflations increased: output still rose, but much more slowly – the average rates in the pre- and post-peak periods were 2.3% and 1.2%, respectively. (Perceptions of truly severe deflations during the interwar period are dominated by the exceptional experience of the Great Depression, when prices in the G10 economies fell cumulatively up to roughly 20% and output contracted by about 10%.)” 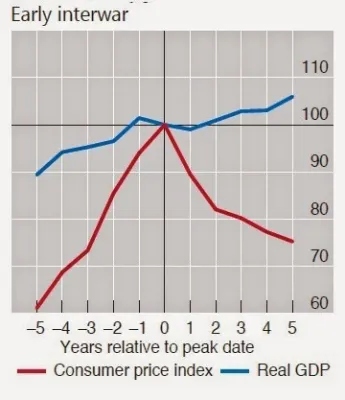 Finally, what about more recent deflations from 1990 to 2013? For this time period, the sample now includes episodes of deflation in 13 places: Australia, China;l the euro area, Hong Kong SAR, Japan, New Zealand, Norway, Singapore, South Africa, Sweden,  Switzerland, and the United States (in the third quarter of 2008). The recent episodes of deflation have been much shorter: thus, the red line showing the price level dips slightly, but then starts rising again after about a year. The path of GDP growth looks much the same in the five years before and after the deflation. As BIS writes: ”The deflation episodes during the past two and a half decades have, on average, been much more akin to the good types experienced during the pre-World War I period than to those of the early interwar period …” 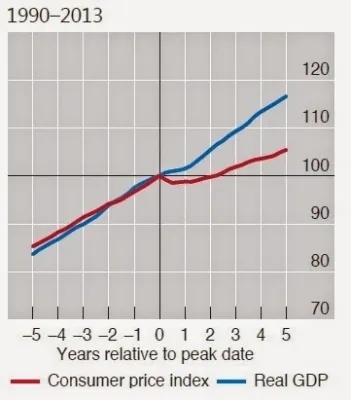 BIS suggests four lessons that can be taken from this exercise.

”First, the record is replete with examples of “good”, or at least “benign”, deflations in the sense that they coincided with output either rising along trend or undergoing only a modest and temporary setback. …

”The second important feature of deflation dynamics revealed by the historical record is the general absence of an inherent deflation spiral risk – only the Great Depression episode featured a deflation spiral in the form of a strong and persistent decline in the price level; the other episodes did not. …   The evidence, especially in recent decades, argues against the notion that deflations lead to vicious deflation spirals. In addition, the fact that wages are less flexible today than they were in the distant past reduces the likelihood of a self-reinforcing downward spiral of wages and prices. …”

”Third, it is asset price deflations rather than general deflations that have consistently and significantly harmed macroeconomic performance. Indeed, both the Great Depression in the United States and the Japanese deflation of the 1990s were preceded by a major collapse in equity prices and, especially, property prices. These observations suggest that the chain of causality runs primarily from asset price deflation to real economic downturn, and then to deflation, rather than from general deflation to economic activity. …

”Fourth, recent deflation episodes have often gone hand in hand with rising asset prices, credit expansion and strong output performance. Examples include episodes in the 1990s and 2000s in countries as distinct as China and Norway. There is a risk that easy monetary policy in response to good deflation, aiming to bring inflation closer to target, could inadvertently accommodate the build-up of financial imbalances. Such resistance to “good” deflations can, over time, lead to “bad” deflations if the imbalances eventually unwind in a disruptive manner.”

In short, the grim experience of the 1930s and its combination of deflation and Great Depression looks like a special case. The typical deflation is not accompanied by a steep recession. Nothing here argues that deflation is desirable or worth seeking to encourage. But the greater danger of economic recession or Depression seems to arise not out of price deflation, but instead when asset prices bubbles overinflate, and then burst.