A Global Transition in Power

A Global Transition in Power 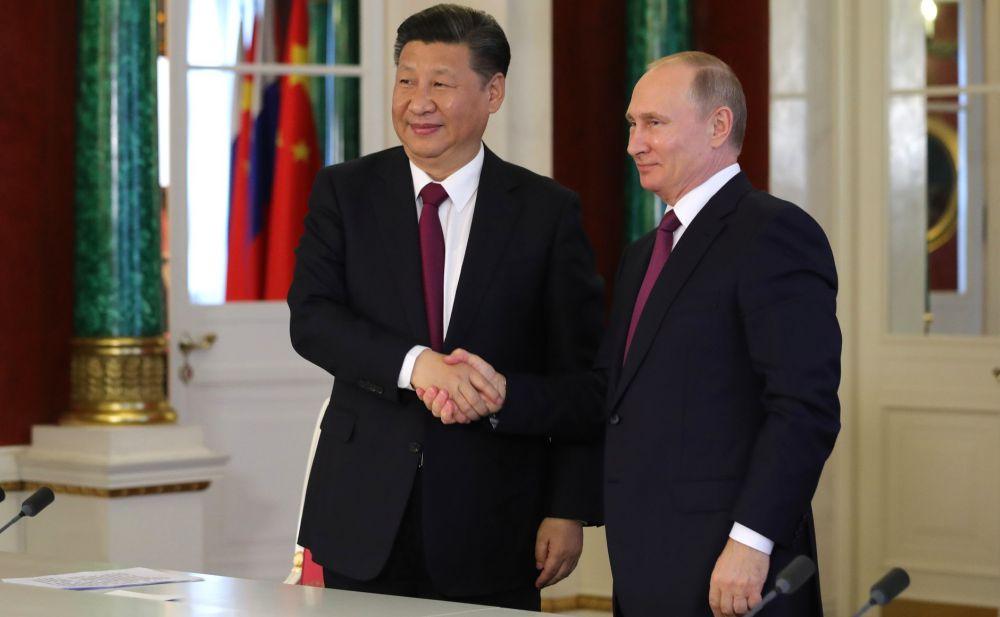 The United States' strategy has been to isolate Russia internationally. Evidently, it is Washington that is becoming more isolated on the global stage. This week in the run-up to the G20 summit in Germany, the reverse in fortunes could not be more glaring. A Major Power Shift is Underway

While North Korea was openly defying Washington with a breakthrough ballistic missile test, and US President Donald Trump was embroiled in his usual juvenile tweeting antics, Russia and China’s leaders were proudly consolidating their strategic alliance for a new multipolar global order. Western media won’t acknowledge as much, but the meeting this week in Moscow between Putin and Xi Jinping was of historical importance. We are witnessing a global transition in power, and for the common good.

Russian President Vladimir Putin and his Chinese counterpart Xi Jinping bond through an apparent deep sense of mutual respect and wisdom about the political challenges facing today’s world. The two leaders have met on more than 20 occasions over the past four years. President Xi referred to Russia as China’s foremost ally and said that in a topsy-turvy world the friendship between the two was a source of countervailing stability.

On the breaking news of North Korea’s successful test launch of its first Intercontinental Ballistic Missile (ICBM), both Putin and Xi called for calm restraint. By contrast, US President Trump took to Twitter to taunt Kim Jong-Un. “Does this guy not have anything better to do with his life?” said Trump in words that could apply more pertinently to the American president. Then the U.S. and its South Korea ally also launched their ballistic missiles in a military drill aimed as a show of strength to Pyongyang. Kim Jung-Un responded that the ICBM was a gift to Americans on their Fourth of July Independence Day holiday and that there would more such gifts on the way.

Rather than escalating tensions, Putin and Xi put forward the eminently reasonable proposal that North Korea should freeze its missile tests and the US should likewise halt its military exercises on the Korean peninsula. All sides must convene in negotiations with a commitment to non-violence and without preconditions to strive for a comprehensive settlement to the decades-old dispute. The contrast in Putin and Xi’s dignified, intelligent response with that of Trump’s petulance is clear proof of Russia and China showing real global leadership, whereas the Americans are just part of the problem. But the Korean drama was only illustration this week of how American ambitions of unipolar dominance have become redundant.

The Relations Between China and Germany are at Their Historic Best

The G20 summit prelude of Putin hosting Xi in Moscow was followed by the Chinese president making a state visit to Germany on Wednesday two days before the gathering in Hamburg. Xi and German Chancellor Angela Merkel reportedly signed new trade deals between the world’s two leading export economies. Of significance too was news this week the European Union is preparing to finalise a major trade pact with Japan. It is also significant that Japan’s Prime Minister Shinzo Abe called on China and Russia to help mediate the Korean crisis immediately following Pyongyang’s ICMB test launch.

Evidently, Japan, despite being an ally of Washington, is reaching out to a multilateral solution as proposed by Moscow and Beijing. In so many ways, therefore, whether on matters of security or trade and economy, the world appears to be moving inexorably toward a multipolar format as the most appropriate response to challenges. Not so from the American point of view, especially under Donald Trump’s leadership. All nations seem to be nothing more than a footstool for the“exceptional” Americans who feel entitled to hector and browbeat everyone else to get what they want.

Once Dominant, America Find Itself Isolated

America’s isolation in the world was glimpsed at the G7 summit earlier this year in May when the other nations awkwardly diverged from Trump on his decision to withdraw the US from the global climate accord. Two months on, the isolation of Washington is even more vivid on the world stage as G20 leaders gather in Hamburg this weekend. A Bloomberg News headline put it succinctly: ‘Trump risks uniting Cold War allies and foes against him’. Trump’s quest for “America First” through trade protectionism and his narrow-minded unilateralism toward issues of global security have put America out on a limb as far as the rest of the world is concerned. Where is the American “team player”, the supposed “leader of the free world”? All the self-proclaimed virtues are being seen for what they always were: overblown, pretentious and vainglorious bombast.

America is seen as nothing more than a selfish, hulking giant. Its trade imbalances with the rest of the world are not because of “rotten deals”, as Trump would have it, but rather because the American economy has ruined itself over many decades. The off-shoring of jobs by American corporations and gutting of American workers with poverty wages are part of it. When America now talks about upholding international law and security, the rest of the world just laughs with bitter irony. The wars across the Middle East and the sponsoring of terrorism are largely US products of criminal regime-change intrigues. Who is this deluded head-case in Washington?

The same deluded head-case that has “beautiful chocolate cake” with China’s president in a Florida beach resort, and then proceeds to slap sanctions on China and make provocative military incursions on its territory. It’s not just Trump. It’s the whole American political leadership. The American ruling class has become so blinded by hubris that it can’t even see how the world it claims to dominate is collectively shutting the door on it and walking away. Washington has no answers for today’s world challenges. Because simply put, Washington is the source of many of today’s problems. It has not even the modesty to acknowledge its responsibility. The only thing the US seems capable of is to make current problems fiendishly worse. The Korean crisis is an object lesson.

Presidents Putin and Xi are not scheming to usurp world domination, as Washington would have us believe. Only in Washington would a vision for a multipolar, more democratic global order be construed as something threatening and sinister. That’s because American ambitions of unipolar “full spectrum dominance” are actually threatening and sinister. The world can be thankful it has genuine leaders in Putin and Xi who are forging ahead to create a multipolar global order.

Fortunately, the strategic alliance between Russia and China is underpinned by a formidable military capability. Joint naval exercises this month carried out in the Baltic Sea are a vital insurance policy to back up what Moscow and Beijing are increasingly bold enough to say to the Americans. That message, as Putin and Xi effectively gave to Trump this week, is that American ambitions of world domination are no longer acceptable and no longer tenable. Washington’s days of bullying the world with its moralising hypocrisy and military aggression are over.