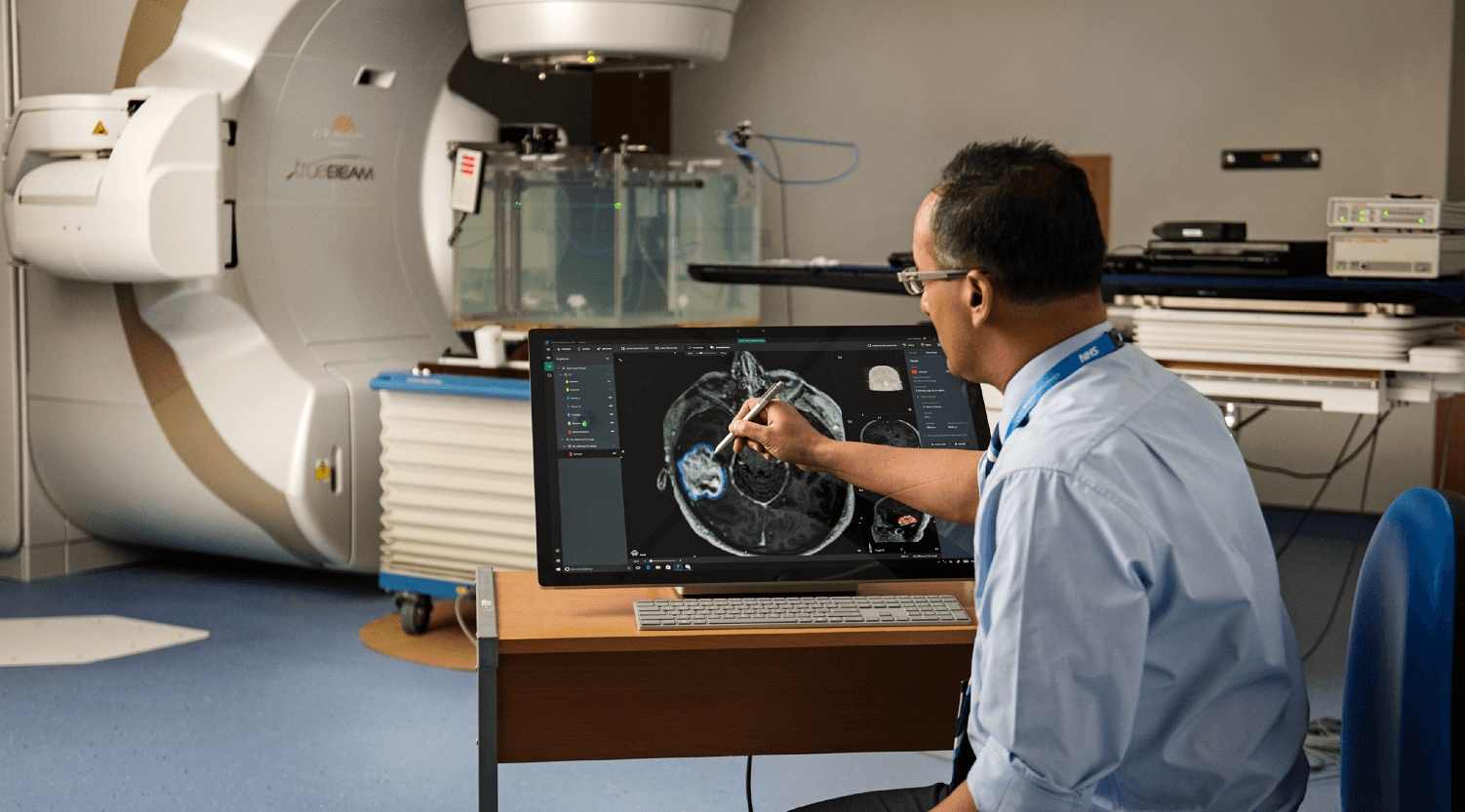 A definitive cure for cancer seems to be distant even as technological advances in the field have significantly improved the quality of research, life-prolonging medicines and surgeries.

From a long-term diagnostics and treatment point of view, how can AI and big data in oncology improve the existing scenario?

Barring a few obvious exceptions, health experts have found ways to inhibit the life-threatening elements of all known terminal diseases. Relentless research and the sheer force of will have allowed global healthcare to neutralize illnesses such as measles and, to a certain extent, even the more recent ones like Ebola. Cancer poses a different problem to nearly all those deadly diseases that we have encountered in the past. For starters, cancer isn’t just one ailment but an entire catalog of them. Secondly, cancer hastens your demise using your own cells as opposed to most other killer diseases that involve external agents. Additionally, as we know, several types of cancers frequently resurface even after treatment. The fact that malignant cells mutate in wild and unpredictable ways does not help matters either. As a result, cancer still kills several people every year, with the figure being as high as nearly 10 million in 2020.

As stated earlier, there are vast amounts of research-generated data available regarding the different types of cancers, the typical symptoms associated with each type and available treatments and medicines to keep patients alive and healthy for longer. This data can be used to fuel AI-powered predictive analysis for more successful early diagnoses and cancer treatments in future patients. As we know, AI is being applied in various areas of healthcare already. So, how can AI positively affect the field of oncology?

Accurately diagnosing cancer in an individual at an early stage promises to be useful to prevent their death due to the disease at an advanced stage later. In such a situation, healthcare systems can benefit greatly from automated tools that can closely monitor cellular formations to know whether tumors, malignant or otherwise, can be formed in a person's body.

AI's data processing and analytical capabilities can be put to good use for this purpose. A combination of machine learning and computer vision can be used for diagnostic operations. Once potentially cancerous cells are identified in an individual, then healthcare experts can conduct tests to know whether the tumor is malignant and metastatic or not. The entire cancer diagnosis process can be carried out systematically. Initially, a full-body check-up of a likely cancer patient must be conducted to detect irregularities in their vital statistics. Generally, cancers can be detected if a person undergoes weight loss at an alarming rate or suffers from a loss of appetite, among other indicators.

AI models and neural networks can be trained using computer vision to identify a cancerous tumor by categorizing factors such as its radius, perimeter, compactness, proximity to organs and others. More often than not, such factors may be useful to select the type of treatment that can be used to deal with abnormal cellular growth. Up next, we will delve deeper into some of the ways in which big data and predictive analytics influence oncology. 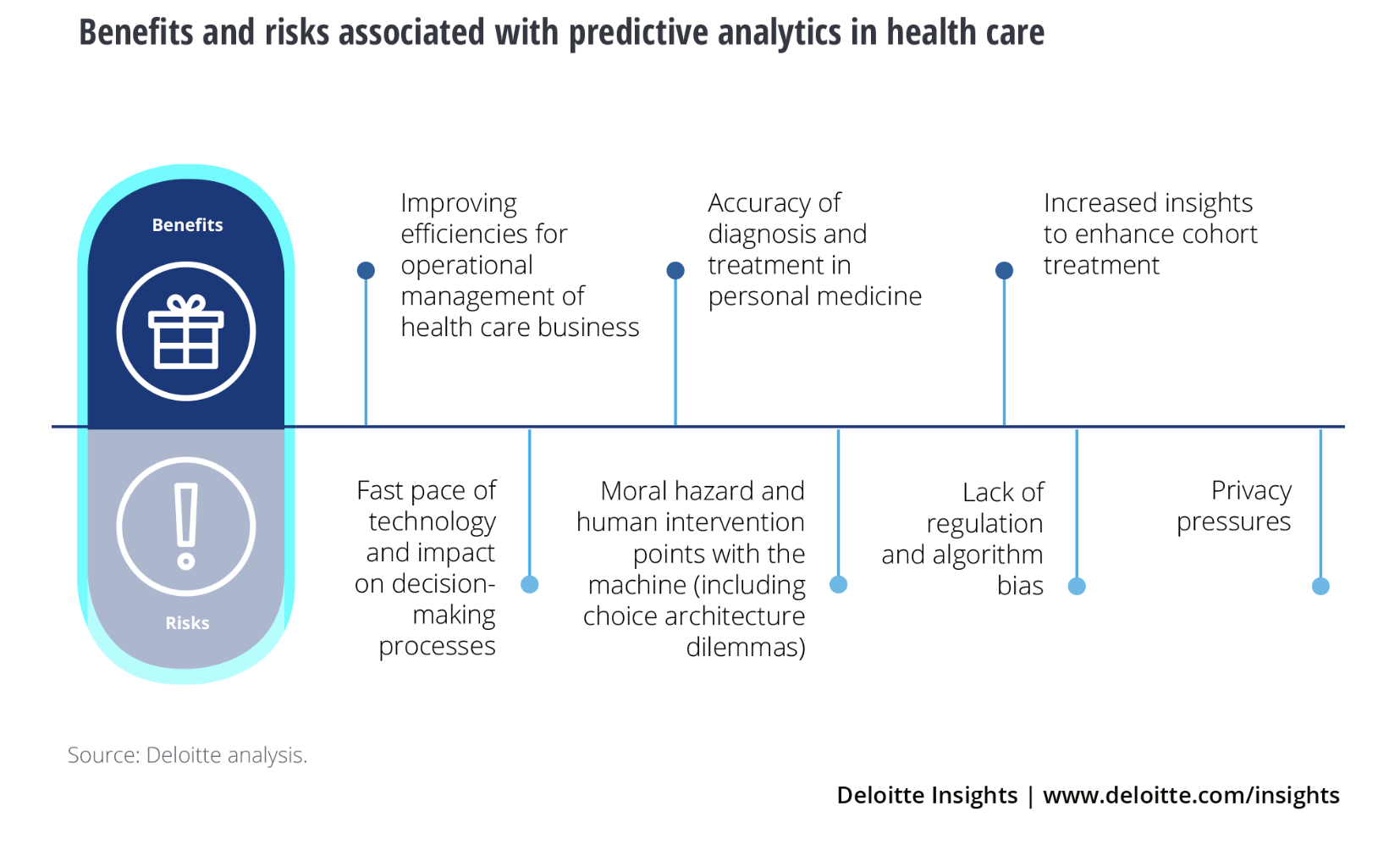 As its name suggests, predictive analysis studies historical information to forecast the events that will take place in the future. So, using this capability of an AI system can be promising for fighting cancer in the future.

Predictive analysis can be a useful tool that helps healthcare workers to diagnose and treat cancer in patients. It helps such experts to not only detect tumors and categorize them based on the level of danger they pose to patients but also to comply with global healthcare guidelines related to patient privacy.

As we know, AI was introduced in the field of healthcare to reduce human error at every step of disease diagnosis and treatment. Accordingly, having cancer-related treatment strategies integrated into an AI system allows doctors to reduce the mistakes related to using incorrect treatments for specific types of cancers.

Predictive analytics in oncology is useful for identifying high-risk cancer patients. Such patients usually suffer from cancer relapses even after undergoing high-intensity treatments such as chemotherapy or other types of surgeries. Identifying such patients at an early stage can be tricky for even the most experienced health experts, but machine learning can identify specific patterns to forecast a possible reappearance of cancer cells in them. By identifying such patients early, the costs of expensive treatments can be avoided, and health experts can focus on using malignancy preventive measures (medicines and lifestyle recommendations) to a greater extent instead.

Secondly, AI-based predictive analysis could allow health experts to study tumor characteristics in a detailed manner in certain patients. Based on such studies, such workers can identify the individuals whose bodies can take chemotherapy without too much post-treatment damage. Certain patients’ bodies may respond to specific treatments in a more positive manner than others.

Finally, predictive analysis is also a useful tool for pathology and biopsy. One of the main problem areas of cancer treatments is the likelihood of using excessive or inappropriate treatments for patients who may not require it. As a result, such patients face a higher chance of dying due to excessive treatments compared to cancer itself. So, predictive analysis systems, such as Google’s AI tool, offer higher accuracy in cancer diagnoses so that doctors can focus on measures other than powerful treatments.

Apart from these, predictive analytics can also improve other aspects of cancer diagnosis. For example, machine learning models could be used to create sequencing panels in the future so that big healthcare bodies can avoid using a blind approach to screening an entire population for cancer. Due to its many benefits in the field of oncology, predictive analytics are being used more and more by health experts in the field.

As we know, cancer is a complex beast. Additionally, almost every day, you come across new discoveries about the concept. Treating patients with cancer necessitates healthcare workers to possess and assessing enormous amounts of reference data, which is humanly impossible. Tackling such a complicated problem has taken modern healthcare several years and deaths, with mostly middling to mildly encouraging results.

Here's where big data in oncology truly comes into its own. Health researchers can use big data analysis tools that absorb new information on a real-time basis. Coupled with AI and predictive analysis, oncologists can draw valuable insights from the data to make the correct decisions during treatment. One such tool is currently being used by the Massachusetts General Hospital to detect the type of breast cancer in female patients so that oncologists can zero in on the type of treatment required for patients. Big data and predictive analysis go hand in hand to forecast the element of patient risk. AI-powered systems can be used to incorporate extensive patient information, such as family history, hereditary cancer occurrences, prior biopsies and issues related to hormonal production to understand the gravity of cancer prevalent in a patient’s body.

Due to the highly diversified (and constantly evolving) nature of the disease, it becomes imperative for oncologists to use all the data available to them—that means pretty much all the information regarding cancer found throughout history—to deploy a treatment strategy from patient to patient. Traditional cancer-detecting and treatment tools and models can be inconsistent due to the involvement of humans in the data collation and analysis processes. Involving AI and big data in oncology takes out that aspect from the process. Additionally, the technologies allow cancer treatments to be more accurate, less expensive and less time-consuming. Big data and machine learning are used to examine gargantuan amounts of past information to ensure these things.

In addition to this, big data in oncology is also useful to analyze the levels and types of proteins found in benign and malignant cancer cells. While that bit of information may seem insignificant, cancer treatment is influenced by such factors too. If you think about it, AI and big data in oncology are like two sides of the same coin. Both elements are codependent, meaning that one of them cannot flourish without the other. The combination of big data and AI offers a massive boost for healthcare in general and especially in our fight against cancer. As stated above, big data provides the information for AI and predictive analysis to work on. Using these two technologies, it isn’t hard to imagine that we may eventually overcome the long-standing health hazard called cancer.