NASA Launches DART Probe To Divert an Asteroid From Earth

NASA Launches DART Probe To Divert an Asteroid From Earth 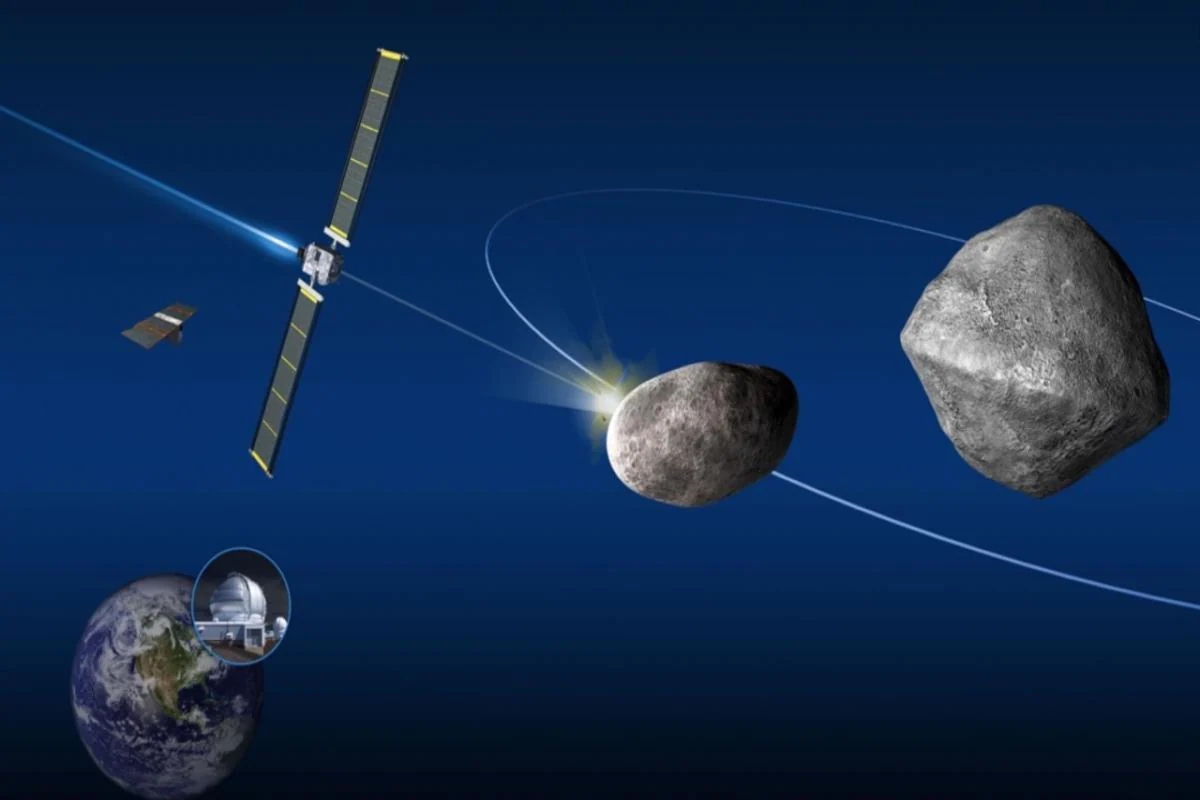 NASA launched this Wednesday a mission to deliberately smash a spacecraft into an asteroid to protect earth and prevent collisions in the future.

This is a test-run led by NASA should humanity ever need to stop an asteroid from wiping out life on Earth.

Asteroids are the left-over building blocks of the Solar System.

It may sound like science fiction, but the DART – Double Asteroid Redirection Test – is a real proof-of-concept experiment. It blasted off at 06:21 GMT, Wednesday on board a SpaceX rocket from Vandenberg Space Force Base in California. DART probe, the size of a car, will slam into the Dimorphos ‘moonlet’ at more than 24,000 kilometres per an hour in an attempt to knock it off course.

The goal is to slightly alter the trajectory of Dimorphos, a “moonlet” about 160 metres wide that circles a much larger asteroid called Didymos 762 metres in diameter. The pair orbit the Sun together.

If a chunk of cosmic debris measuring a few hundred metres across were to collide with our planet, it could unleash continent-wide devastation.

DART is the latest of several NASA missions of recent years to explore and interact with asteroids, primordial rocky remnants from the solar system’s formation 4.6 billion years ago.

Andy Rivkin, the DART investigation team lead, said the current orbital period is 11 hours and 55 minutes, and the team expects the kick will shave 10 minutes off that time.

Planetary scientists can create miniature impacts in labs and use the results to create sophisticated models about how to divert an asteroid – but models are always inferior to real-world tests.

It is the first attempt to deflect an asteroid for the purpose of learning how to protect Earth.

The asteroids in question pose no threat to the planet. But they belong to a class of bodies known as Near-Earth Objects (NEOs), which approach within 48 million kilometres (30 million miles).

Dart will only be changing the period of the orbit of Dimorphos by a tiny amount. And really that's all that's needed in the event that an asteroid is discovered well ahead of time. Since the current orbit period is known, the change will reveal the effect of the collision, scheduled to occur between September 26 and October 1, 2022.

There are 10,000 known near-Earth asteroids that size or greater, but none has a significant chance of hitting in the next 100 years. One big caveat: scientists think there are still 15,000 more such objects waiting to be discovered.

Asteroids that are 10km (6 miles) or wider – such as the one that struck 66 million years ago and led to the extinction of most life on Earth, including the dinosaurs – occur every 100-200 million years.

The key to planetary defence is finding dangerous asteroids well before they are an impact threat.