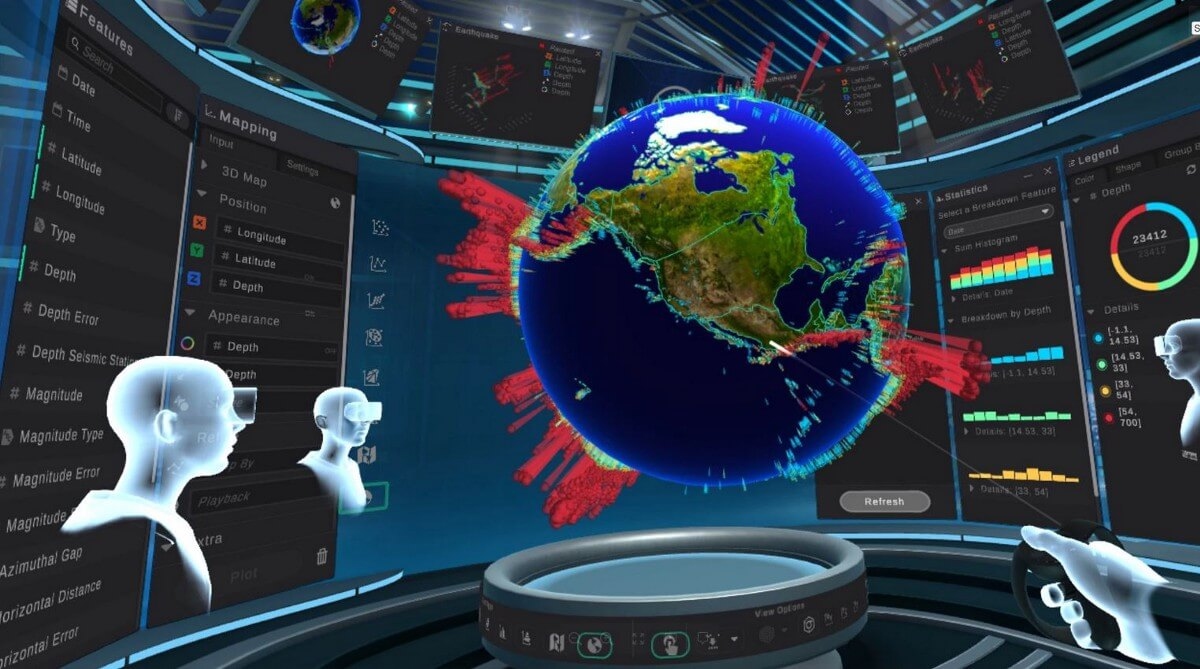 The agility to react to changing situations is among the key determinants of organizational success.

To achieve that agility, it is vital for members to have access to actionable data in a quickly discernable format. As a step towards providing businesses and individuals that capability, applications that enable data visualization in VR or AR are beginning to grow in popularity.

Data has always been and continues to be a critical resource for organizations. This is especially true for business enterprises that need data to not just function normally but also stave off competition. And competition, if you’ve noticed, is getting increasingly stiff in the modern marketplace. Data forms the core of the strategies formulated by businesses to know what customers want and what their competitors are up to. And there is an abundance of different types of data out there to be gathered — one source suggests that over 2.5 quintillion bytes of data are generated per day. To make the most of this cornucopia of data — generated both from internal and external sources — businesses are investing in and developing tools to harness and analyze large volumes of data. Big data analytics, and now artificial intelligence is being used to make sense of the data. But gathering and analyzing large volumes of data isn’t enough — using the insights gained is vital, too. And to make insights actionable, they need to be understood by those capable or responsible for making an impactful decision based on the analysis. That’s where data visualization comes in. Data visualization tools that are widely used today, although more effective than plain analytics, are ineffective at displaying data visualizations that involve larger number of variables. Performing visualization in VR and AR can make even the least math-savvy executive understand the language of data.

The Need For Data Visualization 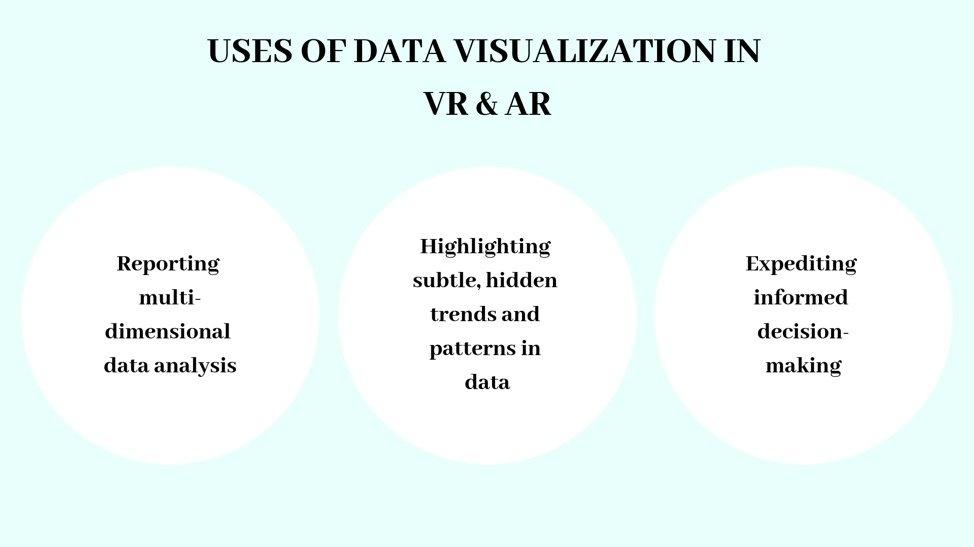 Gathering and analyzing information represent just two-thirds of the process of data analytics. The final third, which is the most impactful one and also validates the first two is action. Information that doesn’t lead to any action is as good as having no information at all. And converting insight into action requires the information to be delivered to and understood by those having the power to initiate the appropriate action. And more often than not, these people may not be the best visualizers or analysts and may find pages worth of reports hard to pore through and identify subtle patterns and anomalies. Or they might be unable to picture and grasp certain bits of information, which may be vital details that need immediate attention.

To assist decision-makers in identifying key pointers from analysis reports, data visualization is becoming an important tool for businesses. Not only is data visualization helping high-order executives in formulating long-term, big picture strategies, but also enabling quick-responses in the day-to-day operations of organizations. For, instance VR simulations can be used by quality control personnel in manufacturing units to inspect large volumes of finished goods to easily spot non-conformance or identify patterns that indicate hidden problems. Or visual simulations during product development and testing can throw deeply hidden or indistinct flaws and problems into stark relief.

While existing data visualization tools offer greater clarity of insight than traditional reports crammed with words, stats, and figures, they have limitations when it comes to presenting the results of complex analytics. Existing two-dimensional methods of data visualization such as scatter plot graphs can show the correlation between a small number of variables or attributes. Thus, to perform analyses of high-dimensional statistics, many such individual charts would be required to get a clear, comprehensive picture. Even visualizations labeled as 3D do not offer enough clarity into problems that involve a multitude of variables as the two dimensions of the computer screen limit the depth of information that is conveyed. To enhance the data visualization experience while analyzing high-dimensional data, it is necessary to have a medium of displaying information in greater depth. And performing data visualization in VR and AR may be our solution towards achieving that end.

Augmented reality can bring data out of computer screens and overlay visuals in the three-dimensional space we live in. This allows us to get a clearer context of the information conveyed. For instance, using a GPS-enabled map on your phone may be a little confusing and hard to follow as compared to modern AR-based navigation systems that point to the direction of the destination in the real world through an AR-enabled device (e.g., a phone camera). Since AR systems superimpose information on to the 3D reality we live in, we can better navigate through the visualization and gain insights even when there are numerous dimensions or attributes involved.

Numerous tech companies are developing AR data visualization tools that can enable people to have a clear understanding of situations requiring the analysis of hundreds and, sometimes, even thousands of data points. Wearing AR devices, people can walk around in physical space to see the correlation between a wide array of variables presented in a lucid, interactive format. They can use gestures to interact with the AR visuals and gain a detailed look into the data that would otherwise be presented in a pile of reports.

These applications can not only be used to report the findings of complex analyses but also be used to deliver requisite information to people in situations they need it most. For instance, in automobile service centers, maintenance personnel can use AR devices and applications to inspect the various components of vehicles and identify problems. Some car repair AR apps also allow visually provide instructions to amateur repairers (car owners) to perform basic maintenance tasks. These apps are more effective than lengthy instruction manuals that users may have a hard time poring through.

VR makes the data visualization process more immersive and interactive, enabling users to view data from a completely different perspective. VR is turning data visualization from a process or an action to an experience. The interactive virtual environment offered by data visualization in VR enables people to step into a world of data to gain insights at the macro level as well as at the micro levels where even fine details are highlighted. While performing data visualization in VR, users can use a range of gestures to interact with the visualizations and gain inferences without needing profound knowledge of statistics or proficiency in data analysis. It also helps put things in perspective by enabling decision-makers to compare numbers and actually know what it means, and how certain numbers impact other figures. This multilayer data analysis capability enables users, both business and individual, to make decisions clearly driven by data.

The benefits of performing data visualization in VR and AR are countless, and the potential applications can go beyond the ones listed above. Data visualization based on virtual reality can also be used in education to enable students to understand abstract, quantitative subjects such as mathematics and by government agencies to drive public policy decisions. By using AR and VR to visualize data organizations can shorten the gap between analysis and action, accelerating the improvement in performance, and in the process, positive results.