Five Factors Supporting the Rapid Growth of Robotics Through 2022

Five Factors Supporting the Rapid Growth of Robotics Through 2022 The rapid growth of robotics is reshaping the global economy post pandemic.

Robotics is a branch of engineering that involves the conception, design, manufacture and operation of robots.

The robotics industry has witnessed tremendous growth during these past couple of years.

In the past, the interaction between machines and humans used to be boring and limited. But, recent development helped robots become much more efficient and entertaining. Today's robots can verbally interact, provide help and save lives. They are becoming much smarter with every passing day.

Realizing the potential of robotics, many organizations have taken significant steps to bring robotics into application in diverse and unique fields. For instance, MIT has introduced to the world a soft robotic fish called SoFi to help save the ocean, whereas NASA is all set to send a swarm of robots to Mars, similar to a swarm of bees. With sophisticated electronic components and detailed programming, there is a lot more to look out for in the future with robotics.

Growth of the Robots Industry: Towards a Better Future

Robotics has come a long way since its advent in the 1920s. From huge and bulky robots to lightweight RoboBees and from wired to wireless robots, the evolution is commendable. Trends in robotics have changed to the extent where robots can now have a citizenship as well. Furthermore, the contribution of robots in various business and social spheres is continuously expanding. For instance, in the field of industrial automation, Co-bots are seen lending a helping hand today. In the healthcare industry, robots are assisting doctors to carry out delicate surgeries. Besides, witnessing robots taking charge of your entertainment in shopping malls, amusement parks, and trade fairs is also not a rare sight today. Here are five factors supporting such rapid growth of the robotics industry: 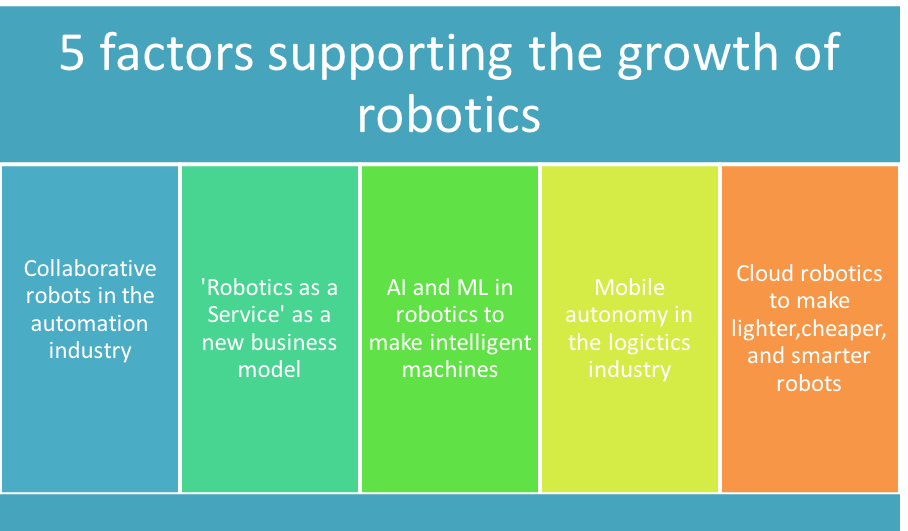 Co-bots are collaborative robots that are programmed to interact with humans and work in a shared workspace. For instance, an American manufacturing company has accepted collaborative robots as their employees. When companies start to embrace such work culture, there is an assurance that robotics is moving beyond machinery into the realm of everyday life.

‘Robotics as a Service’ is a business model where robots can be rented or leased on an hourly or monthly basis to offer services such as patient monitoring in the healthcare sector to look after the elderly people in the house. If a news piece was to be believed, RaaS has a significant potential for growth in 2018-2022.

Artificial intelligence (AI) and machine learning (ML) have shown robotics new areas to explore. Machines are given rigorous training and are fed with improved data to make intelligent decisions without any human intervention. For instance, using the combination of AI and ML in robotics, M.I.T has created a robot named Kismet that recognizes the body language and voice of a human and responds appropriately. Artificial intelligence and robotics are together expected to create many job opportunities in the coming times.

The concept of autonomous vehicles has been around for a long time now. Organizations dealing with manufacturing, production, and supply chain businesses are thinking about using mobile autonomy in their businesses. As a result, mobile robots are being used in many such organizations to shift things from one place to another. For instance, a logistic mobile robot named ‘Chuck’ made by a company based in Massachusetts is earning a lot of bucks in the e-commerce and the logistic industry. In the coming times, we will be seeing mobile robots in motion in warehouses, airports, and hospitals as well.

Robots can access the information stored on the cloud with the cloud robotics. As a result, robots will not have to carry an extra baggage of memory inside, making them lighter, cheaper and smarter. Therefore, there will be a significant increase in the production of robots, eventually leading to an exponential growth in the robotics market. It seems robotics has a lot to offer in the future. The deeper we dive into the concept, the possibilities become endless. So, get set to explore the possibilities for applying robotics in your area of business, today!