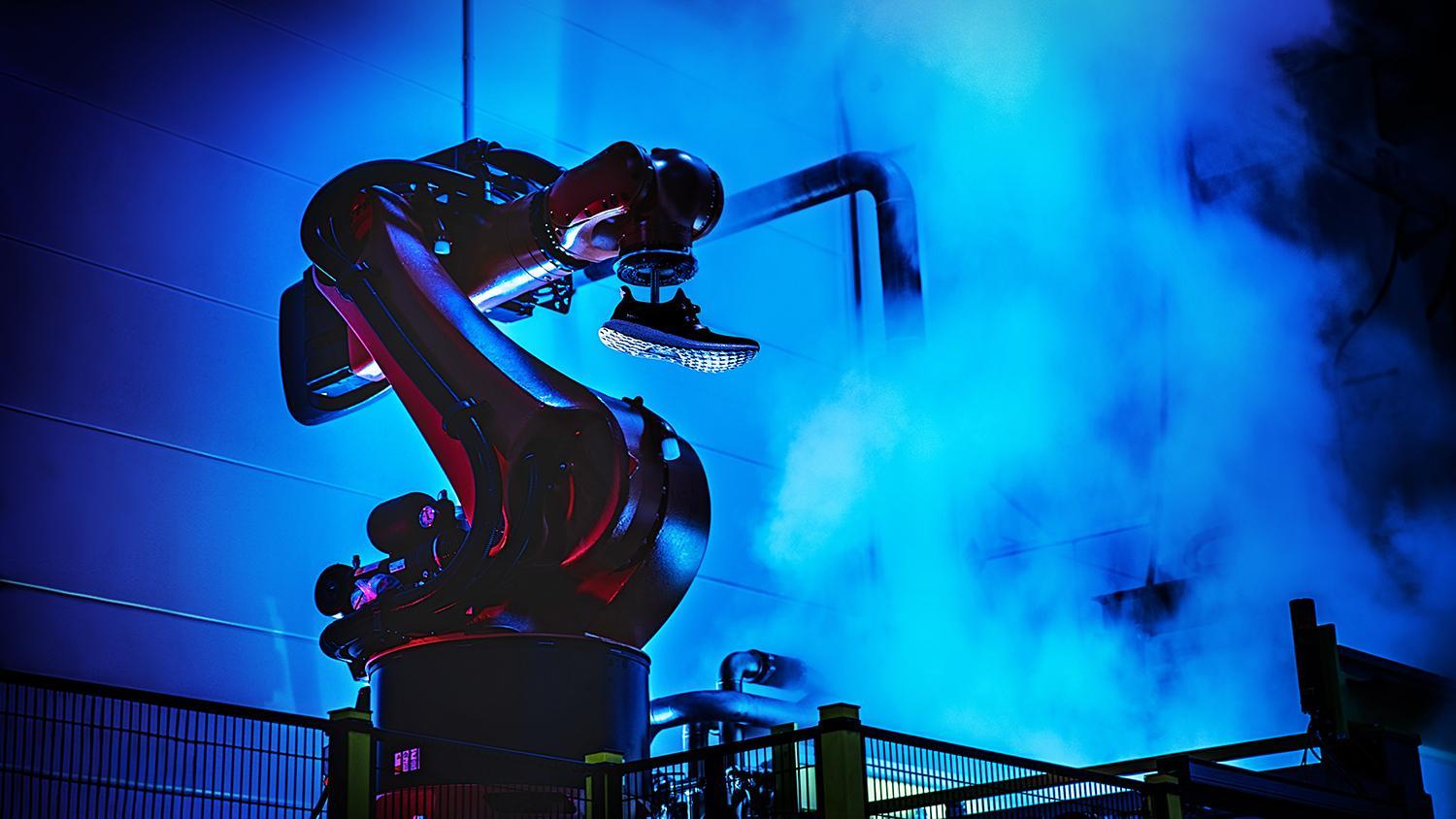 First large scale shoe robot factory unveiled: Adidas is using machines in Germany instead of humans in Asia to make shoes. Adidas, the German maker of sportswear, started marketing its first series of shoes manufactured by robots in Germany since 2017. More than 20 years after Adidas ceased production activities in Germany and moved them to Asia, Adidas unveiled the group’s new prototype “Speedfactory” in Germany. As of 2017, the factory has already begun large-scale production. What's more, Adidas also opened a second Speedfactory in the U.S. last year, followed by more in Western Europe. According to the company, the German and American plants will in the "mid-term" each scale up to producing half a million pair of shoes per year.

Does this pose a threat to Adidas's traditional manufacturing base in China, Indonesia and Vietnam? After all, labor in the region is becoming less cheap these days, and manufacturers are increasingly turning to robots. The current model in the apparel industry is very much based on sourcing products from countries where consumers are typically not based. In the longer term Adidas could even produce the shirts of Germany’s national football team in its home country. The shoes made in Germany would sell at a similar price to those produced in Asia, where Adidas employs around one million workers. Arch-rival Nike is also developing its robot-operated factory.

This development in the shoe area is just the beginning and will be leveraged to the apparel industry as well.

Adidas recently unveiled the first silhouette produced by its Speedfactory facility, the Futurecraft M.F.G. (or Made for Germany)

Put aside for a moment how moving jobs back to a country with high costs gives companies an incentive to automate. There's a bigger issue: After displacing western manufacturing workers, robots are poised to do the same in developing economies, too. It will be hard to re-shore jobs that no longer exist. It took 50 years for the world to install the first million industrial robots. The next million will take only eight. Importantly, much of the recent growth happened in particular in China, which has an aging population and where wages have risen.

A Kingdom of Robots

China is installing more industrial robots than any other country in the world:

In some respects that’s a good thing, of course. Working on a production line is monotonous, and sometimes dangerous. However, building a large manufacturing sector has traditionally been the path emerging economies have taken to raise living standards. Now, robots and other types of automation are a threat to that development model. The United Nations warned two-third of jobs in developing countries are at risk. Add to this the impact of 3D printing, digitalization (includes Artificial Intelligence - AI) and the Internet of Things (IoT).

Many of the jobs done in developing countries can be automated:

Room for Growth - in China

China has a low concentration of robots relative to the size of its industrial workforce:

Back when the western middle class flourished after World War II, factory automation was expensive. Robots were limited to only a few sectors - mainly the auto industry - and those automatons weren’t that sophisticated. Wages rose thanks to improved productivity, but workers weren’t completely made redundant by the machines. Poorer countries in Asia or Africa probably won't be that lucky. Today's robots are far more capable, are being deployed in a wider range of industries, and are cheaper too. That leaves less room for wages to rise before humans are priced out of the labor market. More low-cost automation also means manufacturing can be re-shored to developed economies.

German robot maker Kuka, acquired last year by China’s Midea, estimates a typical industrial robot costs about 5 euros an hour. Manufacturers spend 50 euros an hour to employ someone in Germany and about 10 euros an hour in China. Rather than seek out an even cheaper source of labor elsewhere - in another emerging Asian economy, say - Chinese manufacturers are choosing to install more robots, especially for more complex tasks. China isn't getting rid of the work, just the workers.

If Robots are the Future of Work, Where do Humans Fit in?

That could be one reason manufacturing employment has already peaked in many emerging economies, and it’s been happening at a quite a low percentage of total employment and at an earlier stage of economic development. Taken together, it's possible robots end up exacerbating inequality in low income countries. We’ll have to deal with the consequences: few manufacturing jobs are coming back to western countries and not many will be created elsewhere and of course the fashion industry will be affected by this development hugely.

View all
How Competitive Benchmarking Misses the Mark – And What Anticipatory Leaders do Instead
Important Questions You Need To Ask Before Starting a Business
Five Key Considerations For Managing Layoffs
How to Make Difficult Conversations Easy and Effective
Why Your Title Doesn’t Make You a Leader
How to Use Dynamic Ads to Elevate Your Social Media Marketing
Are All Cleantech Venture Capitalists Marxists?
How to Use Technology to Decrease Your Environmental Footprint
Cities and Pandemics
The Future of Energy: Conversations with Kelcy Warren
The European Union’s Misguided Energy Price Cap Proposal
Blackstart: How the Grid Gets Restarted & Why It Matters
What Should You Know About Investing? Top Examples And Tips For Beginners
Colorado Real Estate Investing Strategies
Payroll Check-13 Facts for the Beginners
When Lower-Income Countries Face Rising Global Interest Rates
How To Find More Clients For Your Real Estate Business: A Guide From Experts
Foreign Exchange Markets: $7.5 Trillion Per Day
How The Best Companies Support Leaders During Challenging Times
Three Patterns in World Trade Since the Pandemic
Some Economics of Dominant Superstar Firms
Updates on the Social Cost of Carbon
Female Autonomy and Economic Development
Marwan Kheireddine: Going ‘Back to Basics’ Can Rescue Lebanon’s Economy
The G7 Cap on Russian Oil Is a Subsidy to China
How Governments Can Leverage AI To Detect And Prevent Future Terrorism Events
Should Central Banks Fear Inflation or Recession?
The Safest and Most Dangerous Places to Work in the UK
Investment Charges When Mexico Privatized Social Security
Henry Adams on the Corruptions of Power
Understanding TinyML - Benefits and Applications
Of Diet, Doctors, and Denial
Impact of Big Data Analytics in Healthcare
Accelerating Innovation in Architecture, Engineering and Construction
6 Facts Society Needs to Learn About Keto-friendly Foods
If You Have A Private Medical Practice You'll Want To Read About These 6 Tips
Use The Three Greeks To Improve Your Powers of Persuasion
How Body Language Strengthens or Sabotages Your Leadership Presence
Now “Bono” & Hakimi Keep Morocco’s World Cup Dream Alive
6 Digital Marketing Trends to Follow in 2023
The 10 Best Sources of Future Trend Intelligence
Succeeding in a Time of Whirlwind Change
How to Easily Start Your Web Service Business in 2023
Will Artificial Intelligence Take Over the Role of Visual Effects Artists?
How Does VPS Hosting Work?
Generative Design in Manufacturing – Unleashing the Capacity to Create
The Evolution of Gasket Technology
How a Cobot Collaborates with Humans for Maximum Yield

How Competitive Benchmarking Misses the Mark – And What Anticipatory Leaders do Instead
What Should You Know About Investing? Top Examples And Tips For Beginners
Important Questions You Need To Ask Before Starting a Business
Use The Three Greeks To Improve Your Powers of Persuasion
Five Key Considerations For Managing Layoffs