As a boy brought up in Florida, Jeff Bezos developed a keen interest in computers. 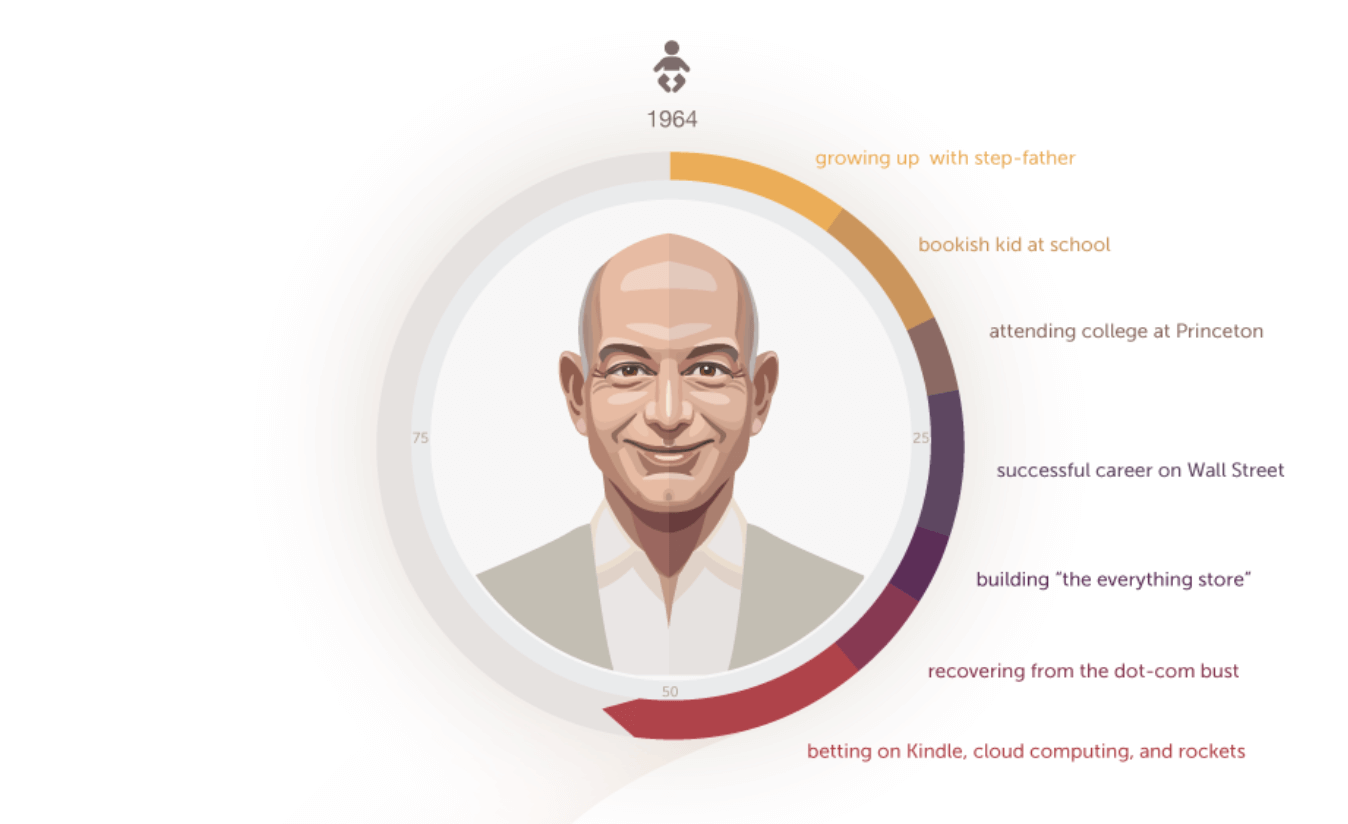 He graduated from Princeton in 1986 with a degree in computer science and electrical engineering. He then worked for an investment firm in New York before quitting his well-paid position in 1994 to start Amazon, just as internet commerce was beginning to take off.  He started the company in his garage where he wrote the software systems for online commerce.  He opened his virtual bookstore in 1995.  The success of the company was spectacular. Within two months of opening sales were running at $20,000 a week and they continued to escalate.

Amazon.com went public in 1997.  Traditional bookstores responded with their own websites but none was as appealing, as agile or as successful as Amazon.  Bezos diversified his product range first with CDs and videos followed by electronic goods, toys and clothes. Sales leapt from half a million dollars in 1995 to $17 billion in 2011.

Amazon pioneered many innovative practices such as recommending what customers would like based on an algorithm which compared previous buying patterns with those of other consumers.  Although its sales of new books were growing very healthily, in 2002 Amazon introduced a service whereby people could sell second-hand books through the company’s website. This was surprising as it appeared that each second-hand book sale meant the loss of a larger-margin new book sale.  The move was controversial and Jeff Bezos sent out an open letter explaining Amazon’s actions. In it he argued that selling second-hand books was good for customers and therefore good for the industry.

Amazon developed tremendous IT skills and capacity as it grew rapidly selling books and other products on-line. It was a giant in B to C (Business to Consumer) products. After the dot.com crash in 2000 Amazon found itself with excess IT capacity in its data centres. It offered web services to businesses and became a leader in B to B (Business to Business) web services – a completely different field from its original strength. By 2015 Amazon Web Services was the world’s leading provider of Cloud infrastructure services.

Jeff Bezos realised that there was a potential customer need for an inexpensive reader for electronic books. But Amazon had no experience or competence in electronic product design or manufacture. Amazon’s strengths lay in excellent web services, software and logistics. For the company to launch its own hardware product would be a major step into unknown territory. Yet that is what they did in 2007 with the launch of the Kindle. It became a tremendous success.

The company continued to experiment and innovate in a remarkable number of fields. It produced its own TV and Film features. In 2013 it announced plans for drone deliveries.  Not all the innovations succeed.  In 2014 Amazon entered the smartphone market with the release of the Fire Phone. It was considered to be too gimmicky and it flopped.

Bezos has a diverse range of business interests. He founded an aerospace company Blue Origin, to provide private space flights. In 2013, he purchased The Washington Post newspaper.  In 2016 his personal wealth was estimated to be some $60B making him one of the five richest people in America.

Disrupt your own business before someone else does.

Offering second hand books at low margin threatened Amazon’s higher value new book sales but this did not bother Bezos.  He wanted to own that segment of the market too and to prevent a competitor from seizing it. He was prepared to be misunderstood.

Innovate in another field with your spare capacity.

Bezos led Amazon on a remarkable pivot. Because of its internal IT expertise and spare server capacity the company became a leader in web services for businesses – a completely different field from its core business in consumer goods delivery. Do you have unused capacity that can be put to an innovative use?

Amazon was selling conventional books but Bezos could see that some people would want to read electronic books on computers.  He stole a march on competitors by developing Amazon’s proprietary e-book reader, the Kindle.  It was attractively priced and scooped the market.  For a book seller to build a consumer electronics product device was a risky venture but it paid off.  What will people want to do differently in the future?