The Negative Environmental Impact Of Robotics

The Negative Environmental Impact Of Robotics 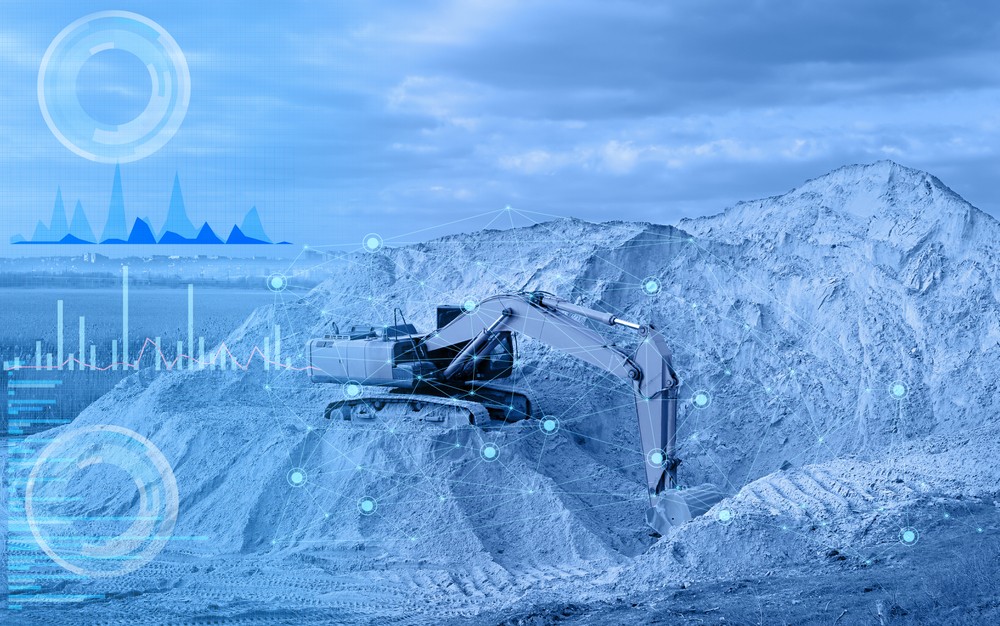 An increasing reliance on robotics-driven automation for your business functions adversely affects the environment in ways you may not be aware of.

This is a part of a wider problem that is the adverse environmental impact of AI.

Robot-powered automation is the present and future of all functions—organizational or otherwise. Accordingly, organizations have started training their personnel to work alongside intelligent automation tools in such a way that they complement each other perfectly. While the benefits of using robotics for automation are well documented by now, we also need to focus on the ways in which technology can negatively impact our environment. The environmental impact of AI includes the environmental issues caused by robotics too. Here are some of the obvious and not-so-obvious ways in which robotics can affect the environment: 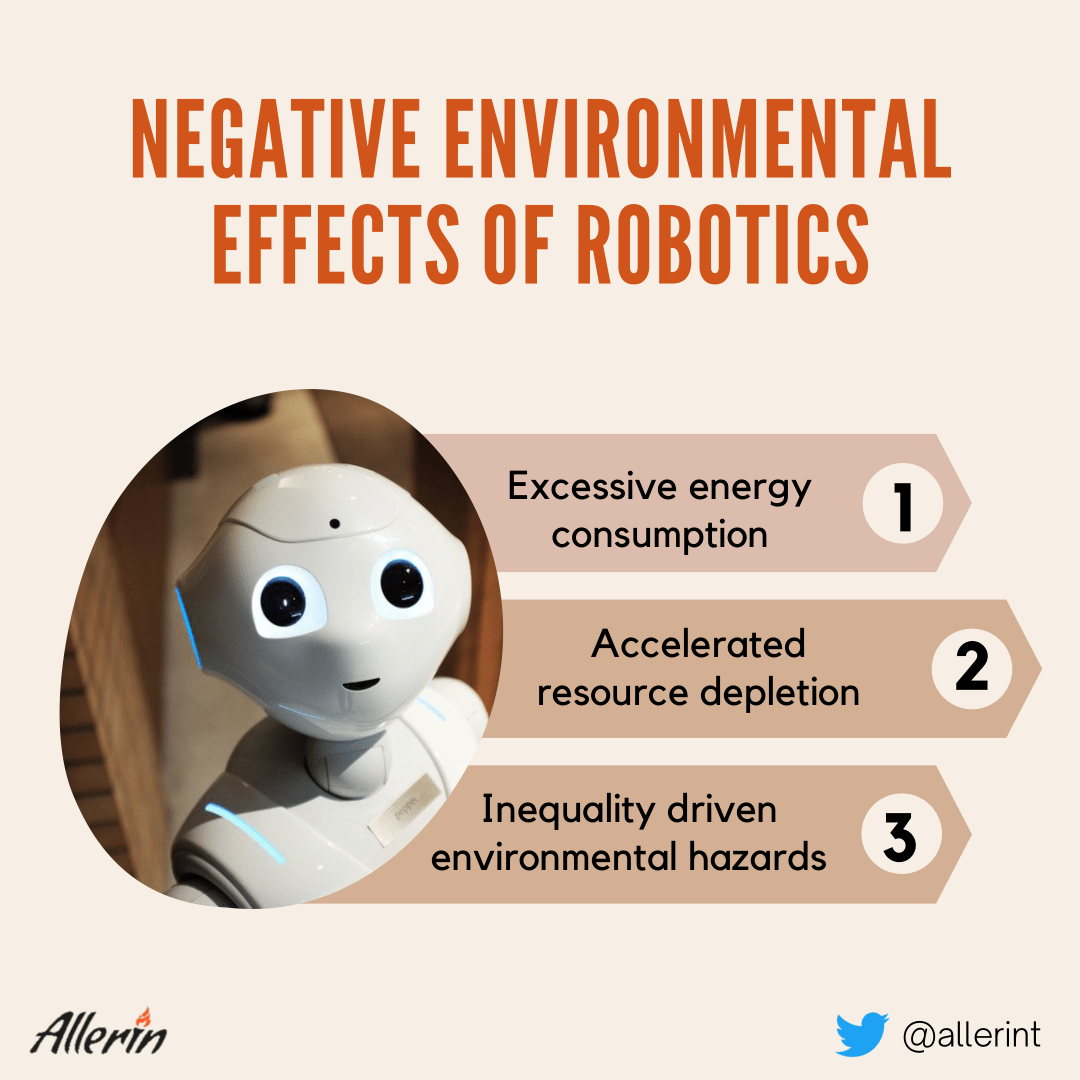 Back in 2017, It had been found that industrial and manufacturing robots use over21,000 KWh annually on average. Additionally, the use of robotics to replace human-powered tasks, boost workplace productivity and facilitate human-robot collaboration are some of the factors that increase electricity usage over time.

Examples of automation replacing human workers include the usage of robots for vacuum cleaners, floor sweepers, delivery vehicles, and forklifts, whereas examples of human-machine collaboration are personal robot assistants with emotional intelligence, surgical robots for invasive surgeries in hospitals. While some of these robotic applications may be frugal in the way they use electricity, using them relentlessly on a daily basis increases the average daily power usage on average.

One of the adverse environmental impacts of AI ironically stems from how it accelerates the production process, which is considered to be one of the main AI implementation benefits. The speed that robotics brings into production directly boosts the consumption of those goods by the masses. In the long term, increased consumption leads to planned obsolescence and depletion of natural resources.

Planned obsolescence involves the creation of products that become obsolete fast and need to be replaced. This not only speeds up resource usage and depletion but also piles on more waste products on a regular basis.

The global progress in terms of robotic advancement in individual countries is rather lopsided. So, a handful of countries, such as China, the US, South Korea and Japan, use more than half of the global stock of robots. Rich and advanced countries automate their industries, leaving poor countries playing catch up. This inequality leaves the have-nots vulnerable to the worst impact of climate change-indicative catastrophes. Inequality is a major driver of environmental damage, and it is one that is, directly or indirectly, caused by the surge in automation and robotics usage by the richest countries.

Resolving such issues requires countries to invest in the development of green robotics-based technologies for automation to reduce resource consumption. Implementing green robotics can be a challenge for businesses. Overcoming inequality is harder still, with the need for world bodies and governments to work in unison over several years to fix the widespread issue. The resolution of such problems promises to be the answer to many of the negative environmental impacts of AI.

View all
Video Production in the Business World: 4 Reasons Why it Matters
You Need to Use Video Marketing for These 6 Powerful Reasons
Intelligent Multitasking
Top Advantages Of VoIP For Your Business You Should Definitely Consider
Do You Sound Like a Leader?
The “4S” Strategy for Smart Manufacturers
The Environment & Utility Services
How Has the Energy Crisis Impacted the Cleantech Job Market?
Global Food Crisis | Agriculture Subsidies | Climate Change | Drought
Energy Research For Electric Vehicles | Autonomous Thought Networks | Mechatronics
How Blockchain and IoT Collectively Reshape Food Production
Mental Healthcare and Climate Change in Small Island Developing States
What Is Credit Score, And Why Is It Important?
The Crypto Trilemma
Top Tips That Will Help You Gain Control of Your Bank Account Again
Bank of England Announced That £20 and £50 Paper Banknotes Will Soon Go Out of Circulation
5 Types of Mortgage Loans for Home Buyers
The Solution to SaaS Payment Management Explained
Pandemic Macro: Stimulus vs. Insurance
Why Government Anti-Inflation Plans Fail
Labor Economics: The Future of Work is Low-Budget Employment
Global Food Crisis: Alternatives to Ukrainian Grain and Russian Fertilizer
Labor Economics | Future of Work | Supply Squeeze | Manufacturing
Economics: Labor Tier Surplus amid Supply Hyperinflation
Brexit: Some Early Evidence and Ironies
A Lateral Way To Expose War Crimes and Fight Disinformation
Gustavo Petro Wins Colombian Presidency
Rotational Migration
Brexit: EU Launches Legal Action Over UK's Northern Ireland Protocol Bill
The UK's Rwanda Asylum Plan Will Discourage Illegal Immigrants
The Importance of Library Innovation in Mental Health Care
Neuroplasticity Pen: Neurotech Research Pre-Alzheimer's Disease and Stroke
Brain Science: Psychiatry at Amyloid Beta’s Era of Alzheimer’s Research
6 Things We Learned From The Latest Pandemic Crisis
Metabolic Syndrome | Memory Disease | Brain Science | Sleep Neurobiology
Everything You Need to Know About Hydrogen Power Backed By Science
Addiction Rehab Marketing Tips and Tricks That Will Attract More Clients
How Consistency Helps To Build Your Brand Passively
6 Good Reasons To Learn First Aid
Chronic Tiredness is Your Doing
6 Simple & Most Efficient Workouts You Can Do At Your Home
Giving Up Is Never An Option In Life
The Metaverse: Myths and Facts
How Machine Learning-Enabled Prosthetic Limbs Improve Mobility for the Disabled
The Benefits of Using a Starscope Monocular Telescope
What is a UX Audit, and Why Should You Conduct One?
The Current Demand For 3D Printing: What You Should Know
What Can I Do To Keep My Confidential Information Safe?