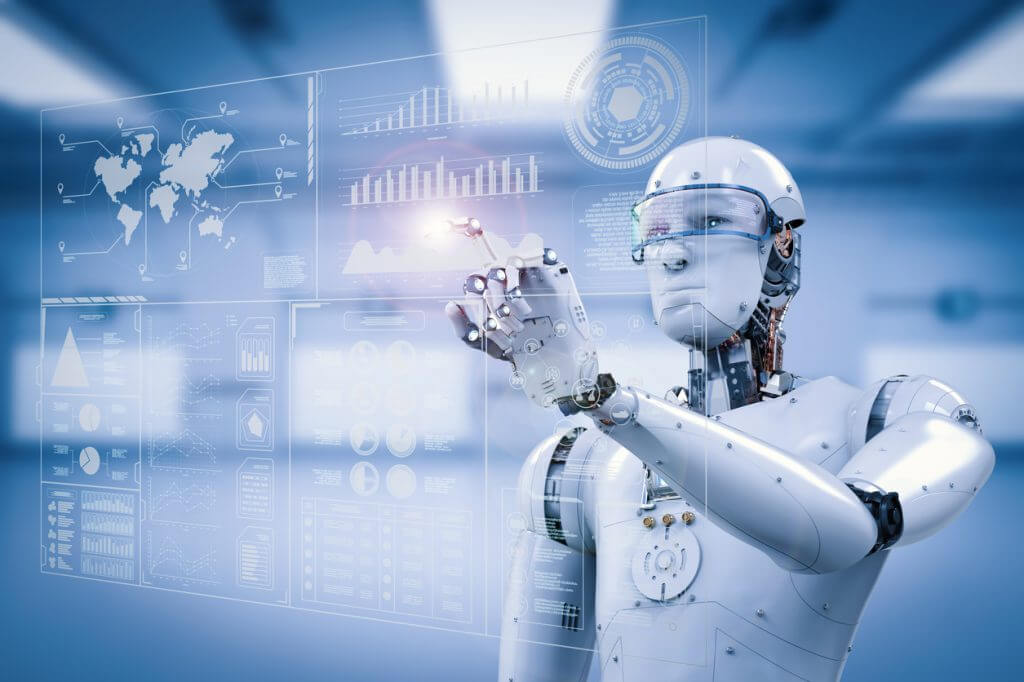 A global value chain refers to the full range of activities that economic actors engaged in to bring a product to market.

Back in the 1920s and 1930s, manufacturing often meant enormous factories that tried to bring as many activities as possible under one roof–what economists call ”vertical integration.” However, the trend in recent decades has been toward ”global value chains,” in which production is not only divided up among a number of specialized facilities, but in additional those facilities are often located in different countries. João Amador and Filippo di Mauro have edited The Age of Global Value Chains: Maps and Policy Issues, a VoxEU.org ebook from the Centre for Economic Policy Research. The volume includes an introduction, 13 essays, and an appendix about data.

One classic example of a vertically integrated plant was the River Rouge plant run by Ford Motor Company in the 1920s and 1930s. Here’s a description:

Located a few miles south of Detroit at the confluence of the Rouge and Detroit Rivers, the original Rouge complex was a mile-and-a-half wide and more than a mile long. The multiples of 93 buildings totaled 15,767,708 square feet of floor area crisscrossed by 120 miles of conveyors.

The Rouge had its own railroad with 100 miles of track and 16 locomotives. A scheduled bus network and 15 miles of paved roads kept everything and everyone on the move.
It was a city without residents. At its peak in the 1930s, more than 100,000 people worked at the Rouge. To accommodate them required a multi-station fire department, a modern police force, a fully staffed hospital and a maintenance crew 5,000 strong. One new car rolled off the line every 49 seconds. Each day, workers smelled more than 1,500 tons of iron and made 500 tons of glass, and every month 3,500 mop heads had to be replaced to keep the complex clean.

In the modern economy, global value chains are coming to define what international trade is all about. From the introduction by Amador and di Mauro:

Until the late 19th century, the production of goods was very much a local affair, with inputs, factors of production and markets being at only a marginal distance from one another. It was only after the ‘steam revolution’ that railroads and steamships started to be used for the transportation of goods, making the sale of excess production to other geographical areas feasible and profitable thanks to the exploitation of economies of scale. Baldwin (2006) refers to this as the first ‘unbundling’, i.e. the process that enabled production to be separated from consumption. …

This transport revolution, while making trade cheaper and at the same time favouring large-scale production, led to the local clustering of production in factories and industrial areas. The geographical proximity of various stages of production made it easier to coordinate increasingly complex production processes and to minimise the associated coordination costs. Due to coordination costs, proximity was very important up until the mid-1980s. It was only then that the information and communication technology (ICT) revolution made it possible to reduce those costs by enabling complexity to be coordinated at a distance. Thanks to the sharp progress in ICT, not only could
consumption be separated from production, but production could also be broken up. The possibility of relocating the different stages of production theoretically enabled different tasks within a production process to be performed by geographically dispersed production units. This was termed the ‘second unbundling’ in international trade, leading to the sharing of production between developed and developing economies from the mid-1980s onwards. …

The relocation of these stages of manufacturing to developing countries fostered high growth rates in emerging markets and was further enhanced by domestic policies aimed at attracting foreign capital. As a consequence, the ‘second unbundling’ reversed the previous industrialisation/non-industrialisation pattern prevalent in developed and developing countries. This change of fortunes represents one of the biggest economic transformations of the last decades and it reshaped, and will continue to shape, the balance of power in both international and economic relations. …

The importance of GVCs has been steadily increasing in the last decades and, as reported in UNCTAD’s 2013 World Investment Report, about 60% of global trade consists of trade in intermediate goods and services, which are then incorporated at different stages of production.

The shift to global value chains raises an array of questions from basic conceptual and measurement and conceptual issues to domestic and international policy. At the most basic level, global value chains challenge the standard ways of even talking about international trade as what one country imports from another. But some substantial portion of what, say, the US imports from China was actually imported into China, used to produce output, and then exported out of China. To put it another way, exports from a given country in a world with global value chains don\’t measure what was actually produced in that country.

In studies of global value chains, a standard measure is to calculate what proportion of the value-added from a country\’s exports are actually from imported inputs. Here\’s a table showing how the share of foreign-value added in exports has generally been rising since 2000, from the essay by João Amador, Rita Cappariello, and Robert Stehrer: 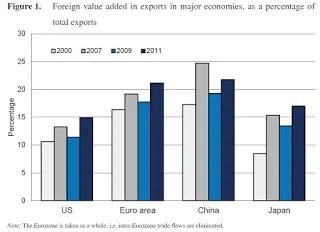 Measuring trade in terms of value-added between countries, not in terms of the value of what is shipped, can alter one’s view of trade flows. For example, the essay by Arne J. Nagengast and Robert Stehrer provides a figure showing differences in trade flows between certain pairs of countries using the standard import and export statistics, and using statistics on value-added in exports and imports. As one example, the US trade deficit with China looks smaller and the trade deficit with Japan looks larger–because inputs from Japan are being exported to China, used in production, and then shipped to the US. As the importance of global value chains rises, these divergences become bigger, too. 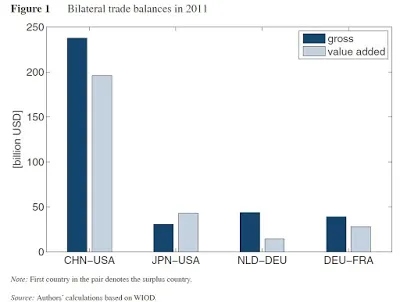 Another issue is whether global value chains are truly global, or whether instead there are groupings of international but regional value chains–sometimes labelled as Factory Asia, Factory North America, and Factory Europe. In their essay, Bart Los, Marcel Timmer and Gaaitzen de Vries

argued that while the regional dimension has been strong in the past, ”‘Factory World’ is emerging.” They write: ”Our analysis shows that value chains have become considerably more global in nature since 2003. Increasing shares of the value of a product are added outside the region to which the country-of-completion belongs. Regional blocs like ‘Factory Europe’ are still important, but the construction of ‘Factory World’ is progressing rapidly.”

The rise in global supply chains also has implications for countries looking for their niche in the global economy. The old-style approach was to focus on what your domestic chain of production and what your economy produced; the new-style approach is to focus on how your economy might fit into an international global value chain. The new emphasis means that connections to information and communication technology become even more important, because they are essential to managing far-flung production chains. Financial and legal institutions also matter more, because these sprawling production chains will require moving money and solving disputes in expeditious ways.